I have never seen a city as pretty as Rome. There are a few places that come close, but the Eternal City has a particular mix of cobblestoned charm, incredible architecture and adorable eateries that makes Rome particularly instagrammable.

If you follow me on Instagram, you know that the different corners of the city are my favorite subjects mainly because of the insanely pretty light but also due to the fact that there are just so many photo locations in Rome.

You can climb up one of the seven hills, pose by a monument, or sneak down a street that is so cute it makes your heart break just the tiniest bit. But where ever you go, there is always something to Instagram in Rome.

Ready to see for yourself? Have your phone fully charged and get ready to snap away.

Most Instagrammable Spots in Rome

Trastevere: This adorable part of Rome used to be considered the wrong side of the river but is now one of the city’s most charming neighborhoods. Walk through the small alleyways early in the morning to have the area all to yourself, or wait until sunset to capture the light on the church and the crowds of students and locals heading to aperitivo at the various outdoor bars that are so popular here. Trastevere is one of the best places to see the mix of modern Rome and old Bella Roma, with workshops and trendy eateries sitting essentially on top of one another. One of my favorite instagrammable angles is on Via dell’Arco di San Callisto. I never tire of taking photos in Trastevere, and it is one of my favorite places to stay in Rome, overall.

Do you make time to wander for wandering’s sake? I used to do this so much more but now it seems like I am usually fitting it in while going to and fro to other commitments. One of the things I love about Rome is the slower pace of life so this busyness is more to do with me and goals, motherhood and work. I wouldn’t change anything but I do sometimes miss my more aimless explorations. #discoverrome

The Rooftop of Eitch Borromini. Nestled amongst the bell towers in an aristocratic palace, Eitch Borromini’s rooftop bar offers an unbeatable bird’s eye view of Piazza Navona. There are domes and terraces as far as the eye can see – as well as beautiful people and glasses of prosecco, which all make for the perfect props for the most Instagrammable settings in Rome. The rooftop is only open in the evenings, and reservations are pretty much essential, but the planning ahead is worth it for the amazing location and the beautiful light at golden hour (which starts about an hour before sunset). 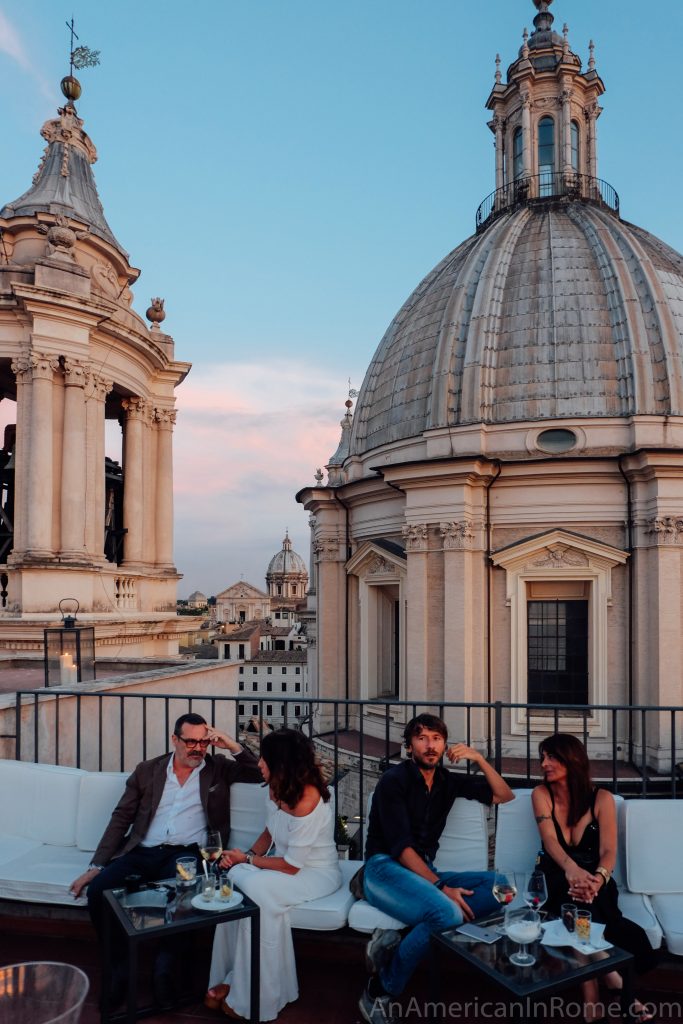 Overlooking the Colosseum. The Colosseum is beautiful inside and out, but for the most iconic photo of the Roman monument, you need to head up the neighboring Celio hill to the level above the Colosseo metro stop. The fastest way up is to take the stairs that are to the left as you exit the metro. Alternatively, you can turn right before you walk out of the station and take the escalator one level up. Don’t be fooled – there will be other people here (and hawkers selling selfie sticks), but if you wait just a minute you will be able to find a place along the low wall and take one unforgettable Rome Instagram photo. I mean — it’s iconic! (Plus the higher vantage point helps to hide the crowds below). 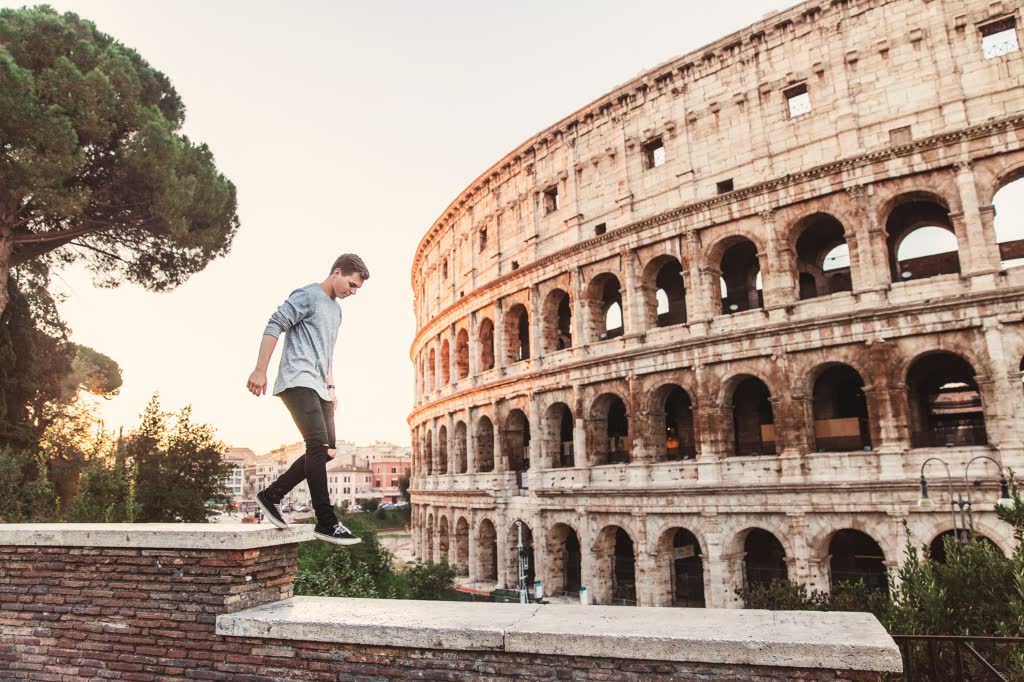 At the end of the Roman Forum. The Colosseum gets most of the Instagram glory but the nearby Roman Forum is also one of the best photo locations in Rome. Where else can you get a better sense of the vastness of the ancient empire than overlooking the fallen temples and triumphal arches? One of the prettiest and best crowd-free spots to get an amazing shot is behind the Campidoglio Hill (another awesome Roman instagram location, if you ask me). Simply walk up Via di San Pietro in Carcere from Via dei Fori Imperiali. 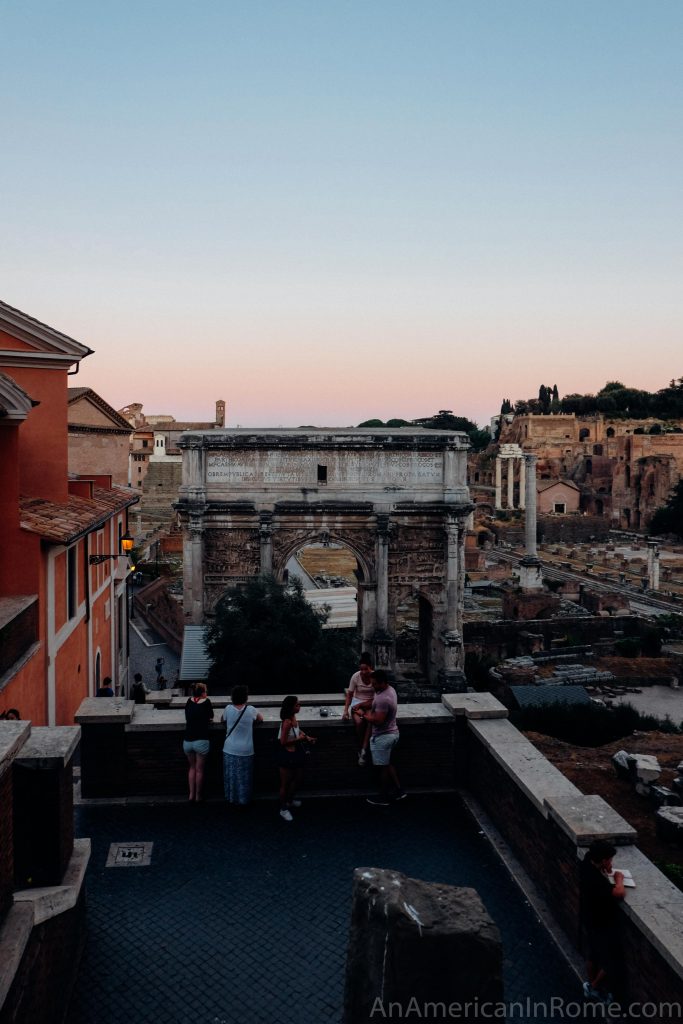 In front of the Trevi Fountain. The Trevi Fountain is one of the top things to see in Rome for very good reason. The thundering fountain is as large as a building and has been fully restored thanks to a generous donation by the luxury brand Fendi. Go first thing in the morning (before 7:30 am) to have the fountain almost to yourself. Otherwise, be prepared to wade through the throngs of people to get to the water’s edge. If you ask nicely, someone is always willing to take a photo of you throwing a coin in.

On Via dei Coronari. Stretching between the end of Piazza Navona and the bridge to Castel Sant’Angelo, Via dei Coronari is truly one of the most beautiful streets in the Eternal City. The street is fully pedestrianized so you won’t have any cars in the photos (or have to dodge Vespas while photographing). Be sure to peek down all the alleyways because there are some excellent Instagram opportunities – like the offshoot of the street that has the most perfect staircase next to Gelateria del Teatro.

Heading straight into the weekend like ? (and there is so much going on, including a national holiday. If you’re not sure what to do, the June calendar of events is on the blog!) #discoverrome

On St. Peter’s Square. Rome’s most famous dome sits atop St. Peter’s Basilica. The square in front of this Vatican City landmark is about more than just the church – there are apostles statues, a fountain, and curving colonnades. The nearly all-white backdrop means that you can go for a hazy, surreal light or add in your own pop of color to grab attention.

From high above the Spanish Steps. The Spanish Steps look west so they are one of the best photo locations in Rome at sunset. Of course, you won’t be the only one there. The buzz of the crowd helps add to the feeling in the photo. But for a truly unforgettable Instagram snap, you need to be inside the Hassler Hotel at the top of the Spanish Steps. You can still get an amazing shot from the Piazza in front of the Trinita dei Monti, but guests at the hotel have the best view from the gym (yes, really) and the rooftop bar at Imàgo restaurant.

Hello from the top of the world (or the gym of @hotelhasslerroma, which is apparently the same thing so now I have new workout view goals) #discoverrome

Along the streets and inside the cafes of Monti. Monti is another one of those Rome neighborhoods that is drowning in charm. Some of the best photo locations in this part of Rome can be found on Via Panisperna (which has a wall of ivy-draped across the street); inside the garden dining at Madre; along Via dei Serpenti (which has a view of the Colosseum at the end); and in Piazza della Madonna dei Monti. It is also one of the best areas for shopping in Rome, in case you have time to be distracted from your photo walk.

Be Patient or be early. The city is pretty full of people so if you really want that shot of a peaceful street, you might have to wait for a crowd of people to walk by. The best way to have the city to yourself is to head to these photo locations by about 7 am.

When all else fails, go for detail. If you really can’t get any good shots without too many people in the background, then focus on the detail. Maybe a triton’s perfect pose will catch your eye at the Trevi Fountain, or you can get up close and personal with your plate of pasta before digging in. Seeing things from a different perspective/zoom can be refreshing because Rome is one of the most photographed places in the world.

It is warm. It is not carbonara weather. So I compromised and ordered a beer to wash it down #problemsolved

Be ready for a lot of graffiti. I have lived in Rome for so long that I hardly even see the graffiti anymore, but it is really there. In fact, it is pretty much everywhere. The only time I really see it is when I am trying to take a photo, and then I realize how invasive it is. You need to try a few different angles or zoom to crop out the most obtrusive tagging. Otherwise, be ready to embrace the graffiti as just one more part of the city landscape.

Get creative with reflections. Don’t let the rain put a damper on your photo plans. The wet weather can actually lead to puddles which create amazing reflections. To capture them, you have to have a keen eye and be willing to get close to the ground

A little sunset reward after a rainy day. I love all of the colors Rome takes and reflects back because they seem to change with the seasons so the views always keeps me on my toes.

Do you have any other seriously instagrammable places in Rome? Where are your favorite photo locations in the city?

One thing is for sure – you will take more photos on your trip to Rome than you have ever really thought possible. There seems to be a once-in-a-lifetime photo every few steps. 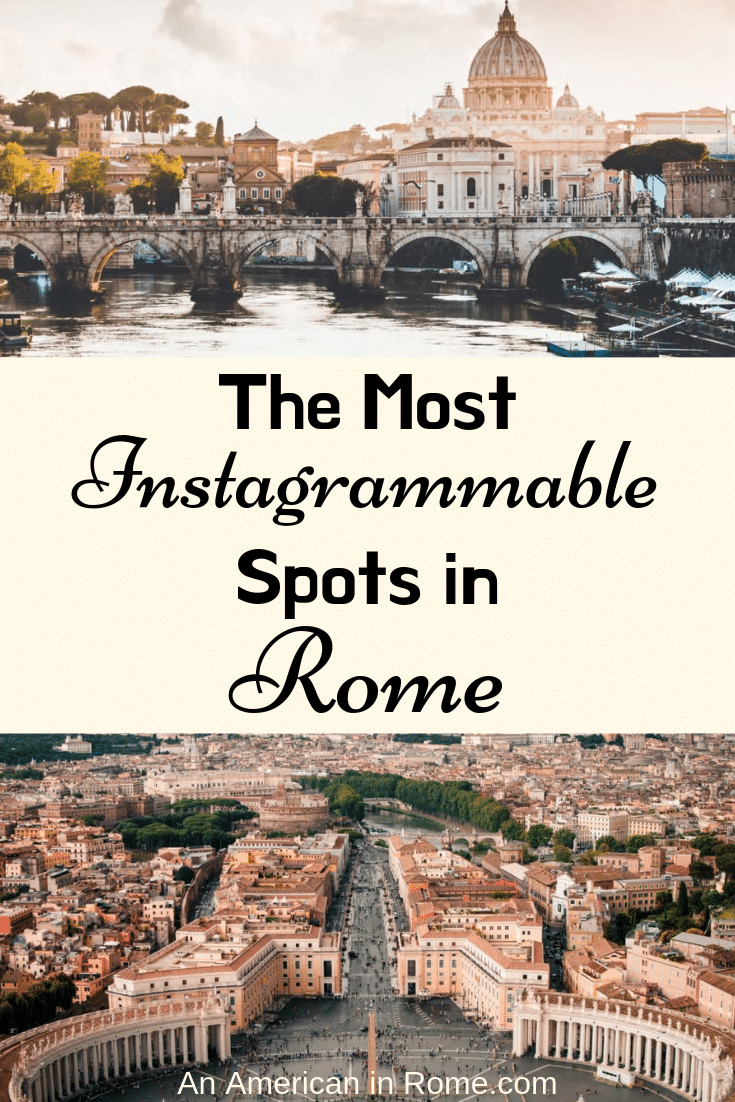 3 thoughts on “The Most Instagrammable Spots in Rome”