One of the most amazing things about living in Rome is that you don’t need to buy a ticket to any of the (admittedly incredible) art museums to see a masterpiece. The case in point might very well be the three Caravaggio paintings (!!) which you can see for free inside the Church of San Luigi dei Francesi near the Pantheon. 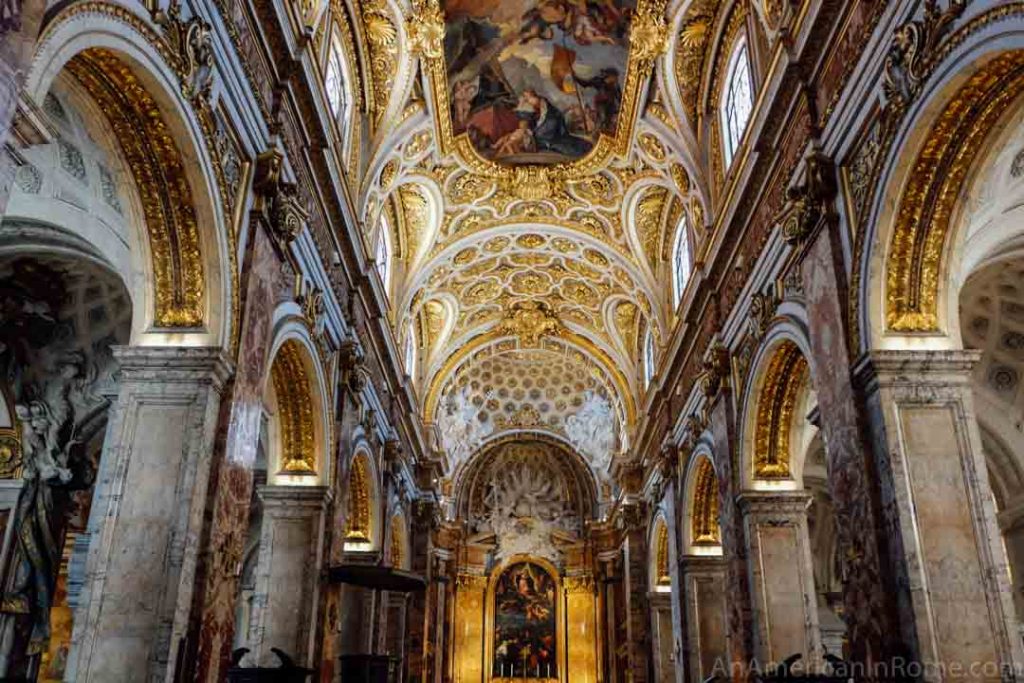 The Church of San Luigi dei Francesci (Church of St. Louis of the French) actually sits right between the Pantheon and Piazza Navona, so you have no excuse not to step inside to soak up all the beauty yourself.

It might seem fairly straightforward from the outside, but the church was designed by Giacomo della Porta and completed in 1589. If you look closely at the statues on the facade, you might see that they are all from French history, and include Charlemagne and Saint Joan of France.

That’s all very fitting because this is the official national church of France in Rome. The church is named for Louis IX, King of France. 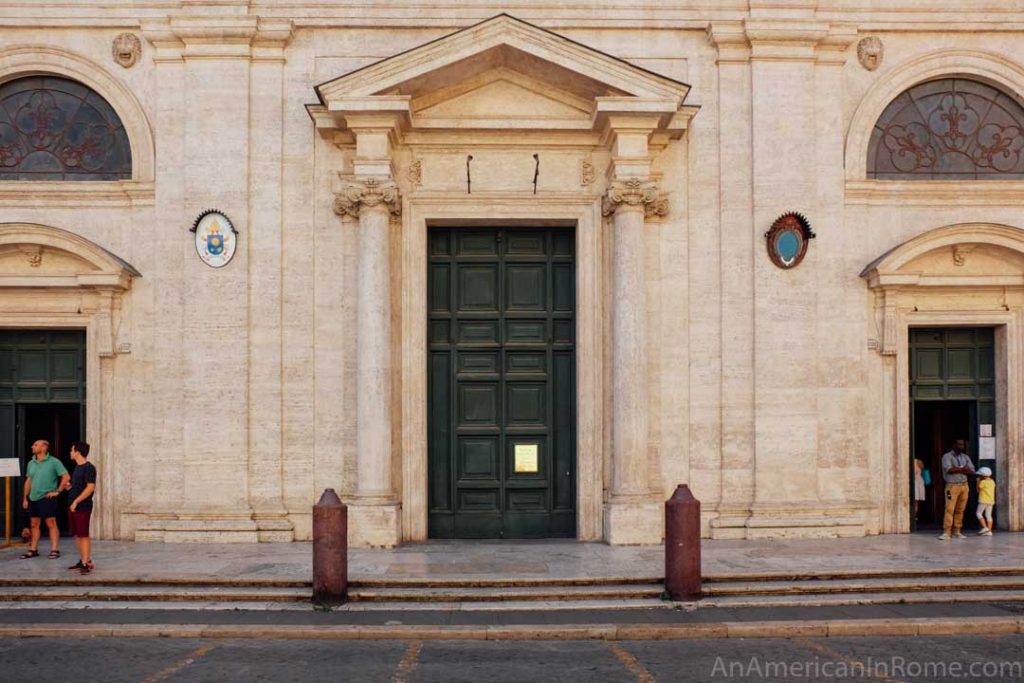 But honestly, no one comes to admire the outside of San Luigi dei Francesi. Everyone comes to see the stunning interior which is home to a trio of Caravaggio masterpieces.

All three Caravaggio paintings are hanging in the Contarelli Chapel in the front left corner of the church. They were painted in the first years of the 1600s and all are centered around the life of St. Matthew. 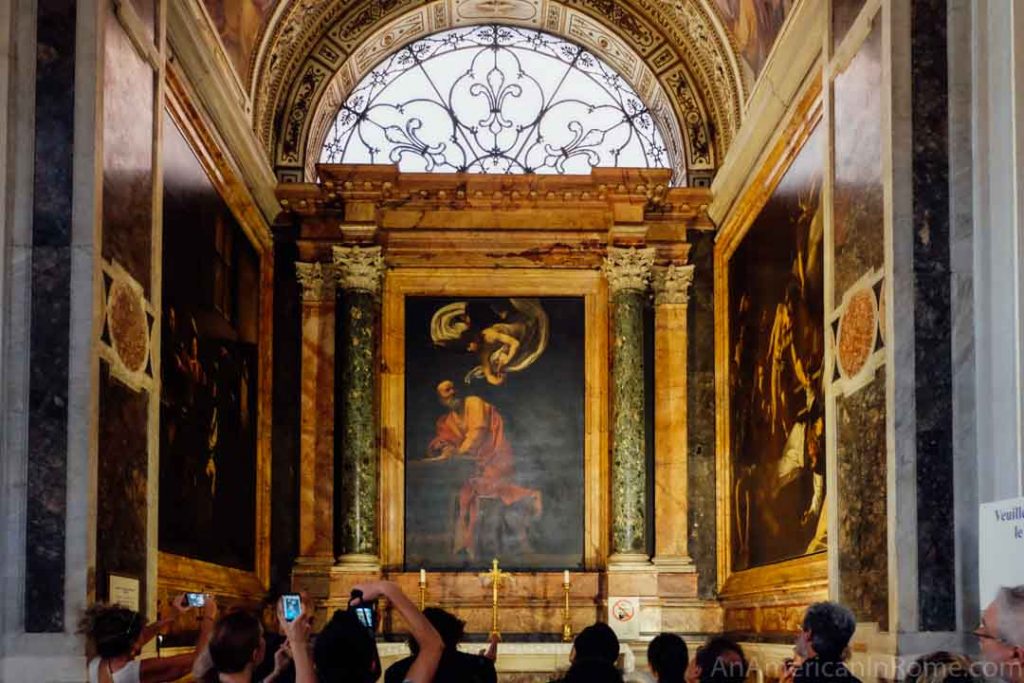 It’s not possible to walk into the small chapel itself, so these Caravaggios are really best seen in person, when you can crane your neck for the right perspective.

The first of the series is The Calling of Saint Matthew (on the left wall): 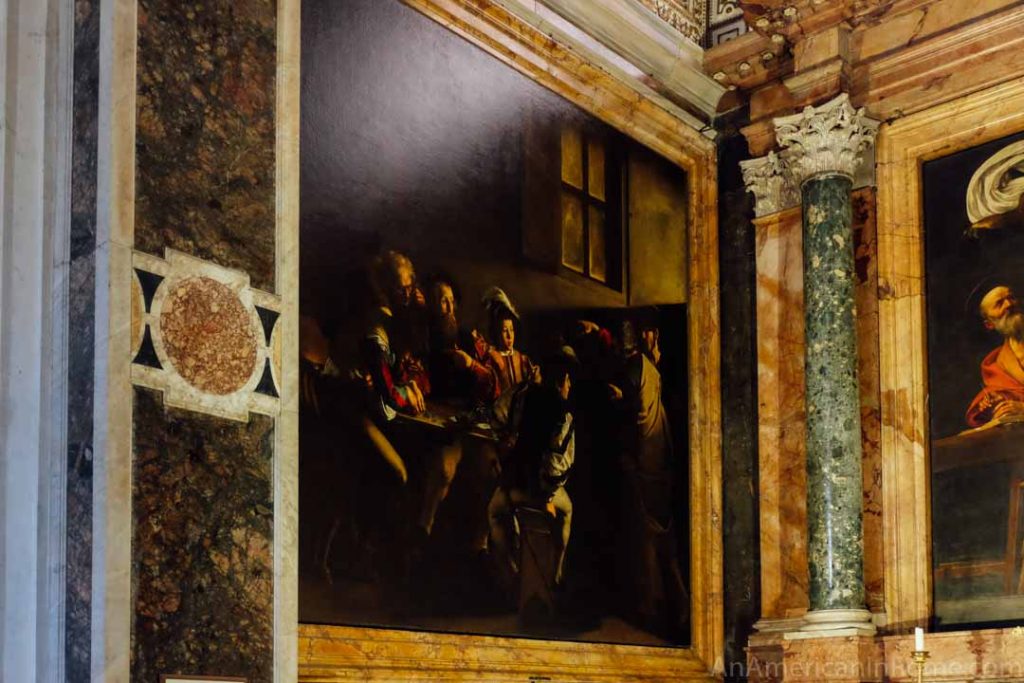 Caravaggio was a master of light and I adore how he gets the effect of sunlight streaming into a darkened room in this particular painting. It represents the moment that Saint Matthew was inspired to follow Jesus Christ, and it does seem to be just a little bit divine.

Next is the Inspiration of Saint Matthew, which hangs front and center:

This Caravaggio painting shows an angel whispering to Saint Matthew. The detail on the cloth painted in this work is absolutely beautiful, as is the effect of illumination that the painter achieved on the two figures.

The painting which we can see here today was actually take two for Caravaggio. He may have been one of the most sought after artists of his time, but the Cardinal who commissioned the paintings of Saint Matthew rejected the first version that Caravaggio created. Unfortunately, this priceless first try was destroyed in World War II, so we can’t see it in person for comparison.

The last Caravaggio painting in the series at San Luigi dei Francesi is The Martyrdom of Saint Matthew (on the right wall of the chapel): 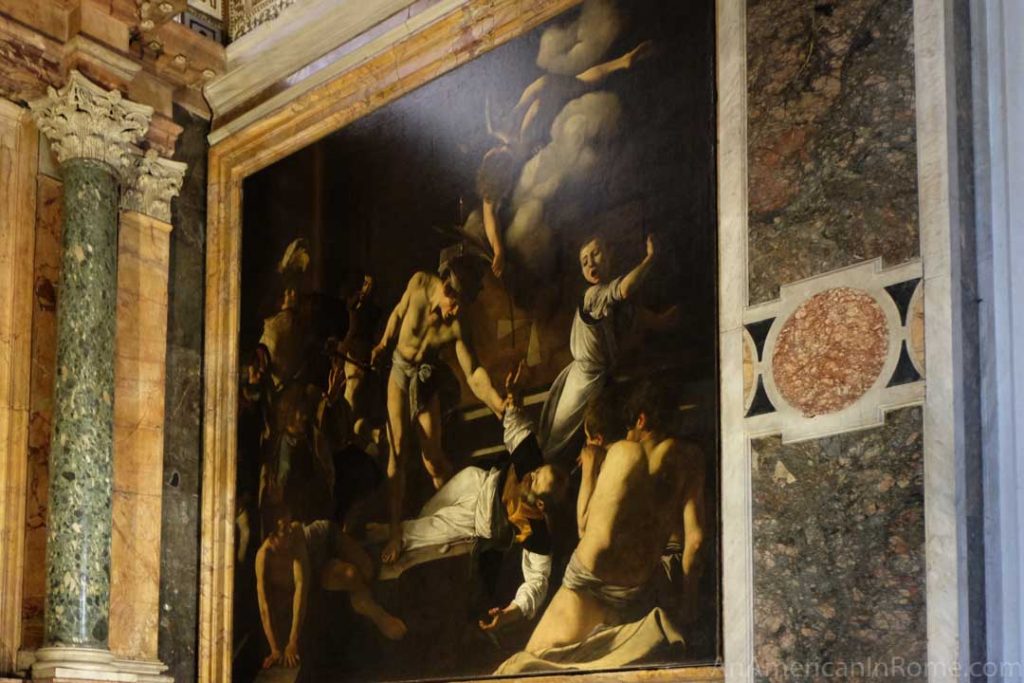 This painting has the most movement and the greatest number of figures. It shows Matthew being murdered while leading a mass at the altar. 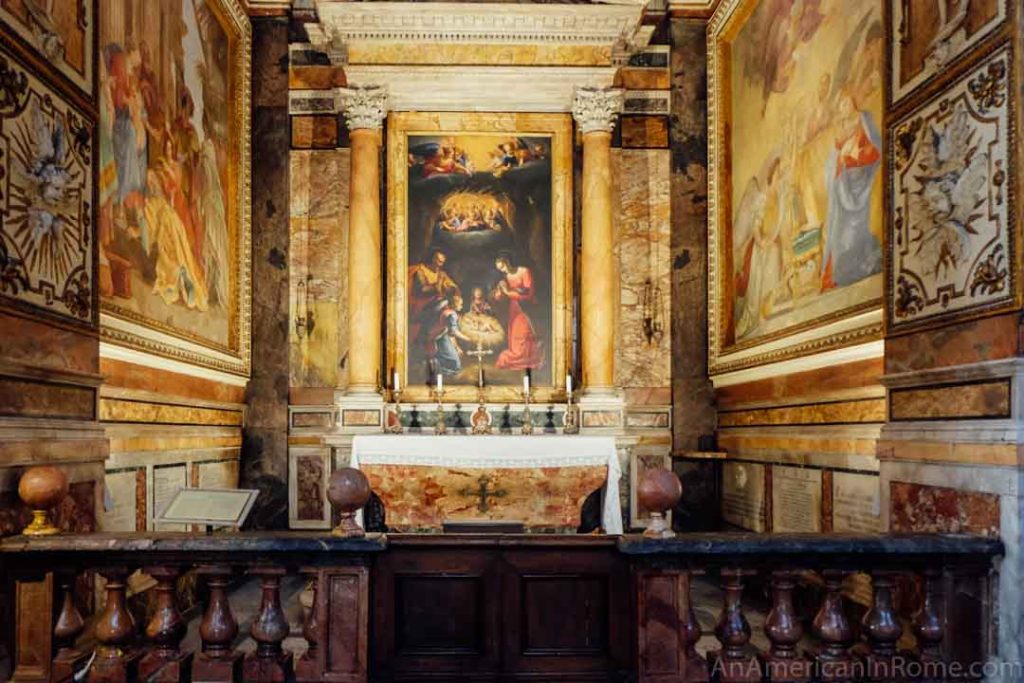 Of course, the Roman church is also full of other beautiful works of art (with fewer crowds in front of them), but all play second fiddle to the three Caravaggio paintings – which you can admire for free, no museum tickets required. 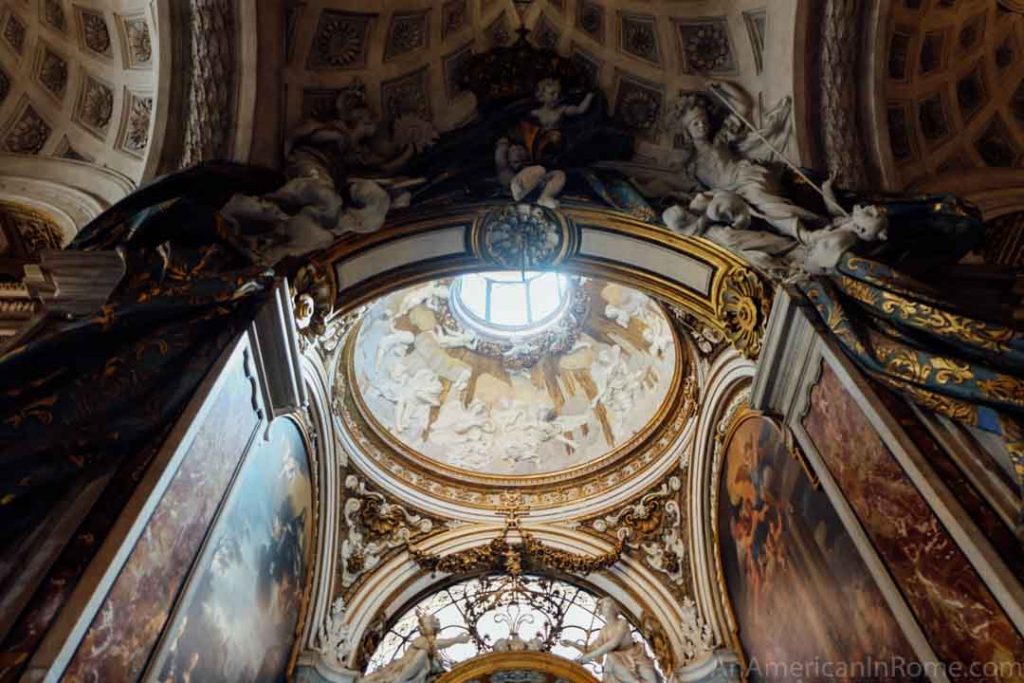 If you would like to see even more of the artist’s work in Rome, be sure to stop to see the Caravaggio in Piazza del Popolo.

Note on visiting San Luigi dei Francesi: If you look closely at the photo from the outside of the church, you may spot a man with his arms crossed standing at the door. He was checking everyone going in and turning away people who were dressed inappropriately.

It was a warm day and I was wearing a dress that grazed my knees and he shook his head at me. He asked in Italian if I had anything to cover my legs with and I said that I did not. He sighed and let me in, but do know that they will enforce shoulders and knees covered here. The church (and all Catholic churches in Rome) has the same dress code as the Vatican.