I might be an American in Rome,  but there is actually an American princess in Rome and she lives at Villa Ludovisi. Sometimes known as Villa Aurora, the palatial dwelling is hidden behind Via Veneto and is the real-life home of HSH Princess Rita Boncompagni Ludovisi. She has the distinct honor of living with the only fresco Caravaggio ever painted. 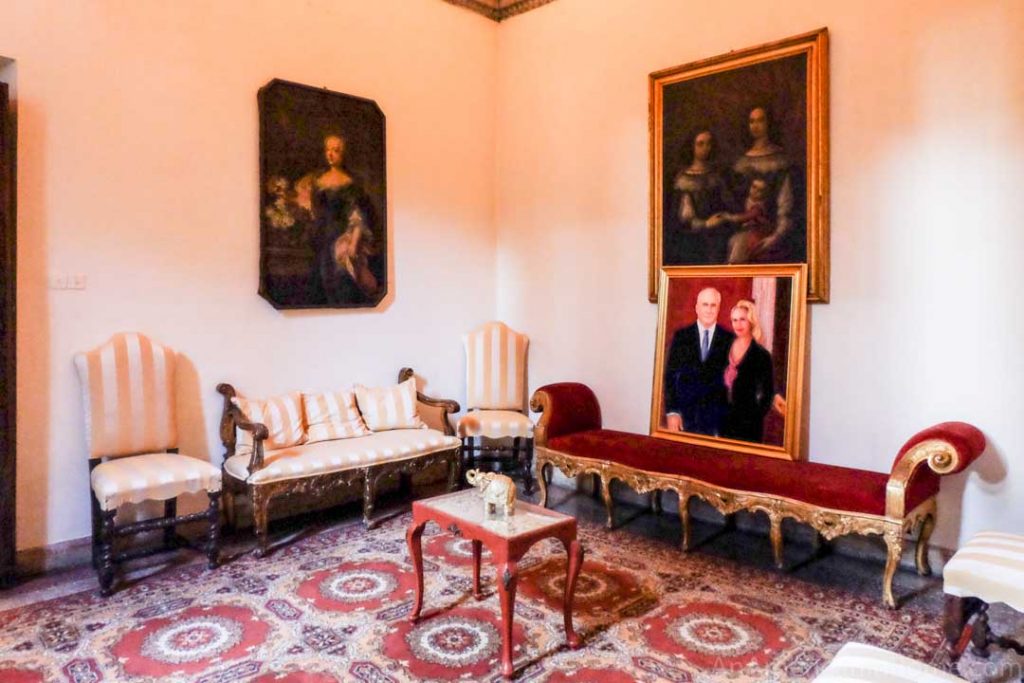 Now, let’s be clear: there is no longer a recognized royal family in Italy. However, the Ludovisis were royalty. The princess is originally from Texas, but she gained her titled when she married HSH Prince Nicolò Boncompagni Ludovisi in 2009.

The Texan was previously known as Rita Jenrette, and was once married to U.S. Representative Jon Jenrette. However, her third husband was the reason she moved to Rome. She met him when she worked in real estate and was showing off one of his Italian properties to a client interested in building a hotel. 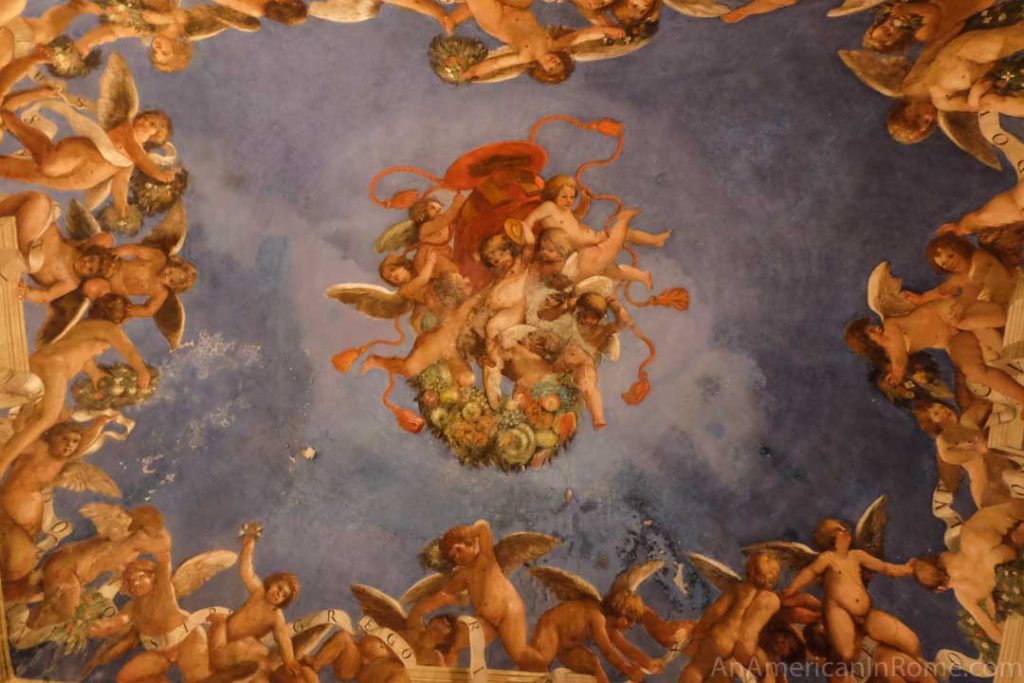 Prince Ludovisi’s title comes from Piombino – a state that his family once ruled until it was abolished by Napoleon. Their holdings have now been reduced to 7 acres of gardens and the lovely Villa Aurora, which is filled with priceless artwork. 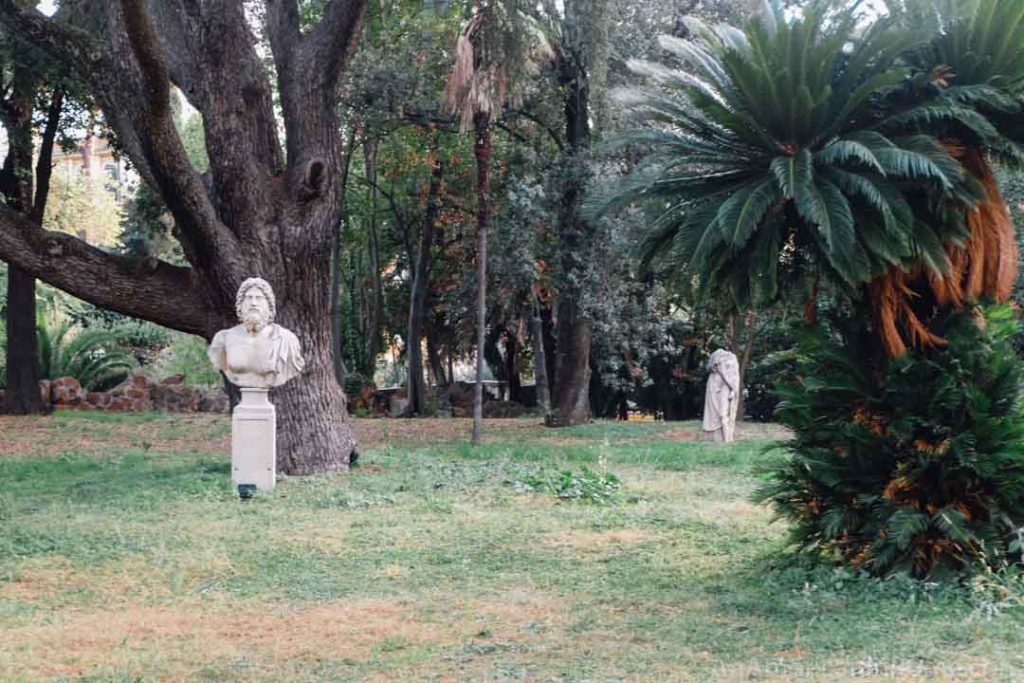 The Ludovisis are related to Pope Gregory XV.  They went on to become nobility thanks to their close Papal connections. Their property once covered most of this side of Rome, near Villa Borghese and the Spanish Steps. But it was sold off and subdivided to create the exclusive neighborhood around Via Veneto. 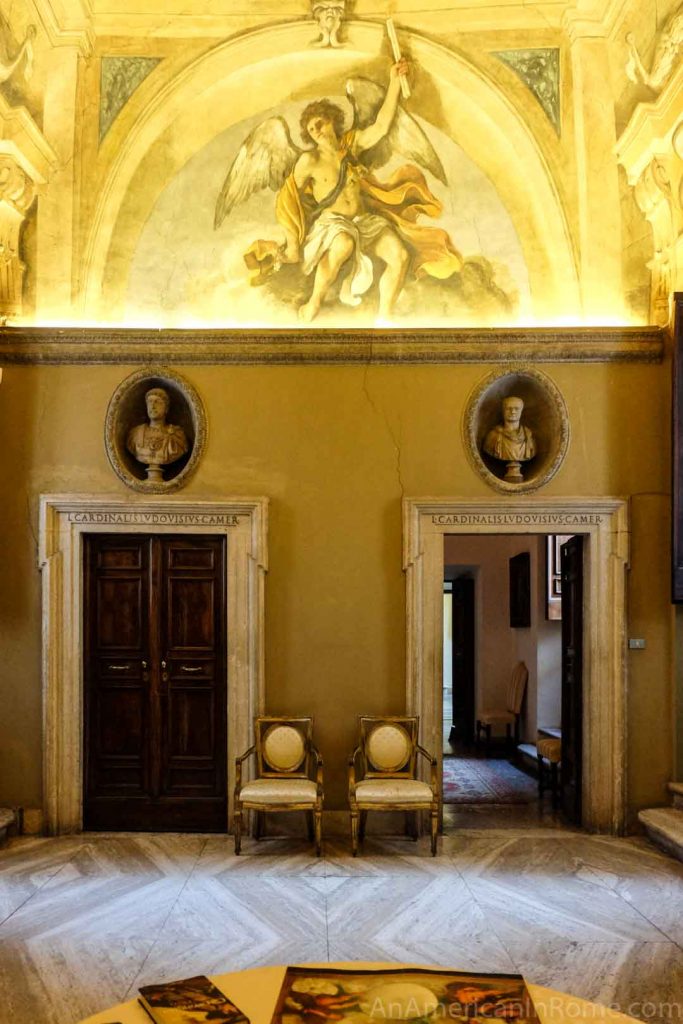 Villa Aurora inside Villa Ludovisi takes its name from a fresco of the same title by Guercino. However, Villa Aurora is best known for having the only Caravaggio fresco in existence. Caravaggio is famous for his moody portraits with incredible lighting but these were all painted on canvas. This image is painting directly onto the ceiling, so it can never be moved outside of Villa Aurora. 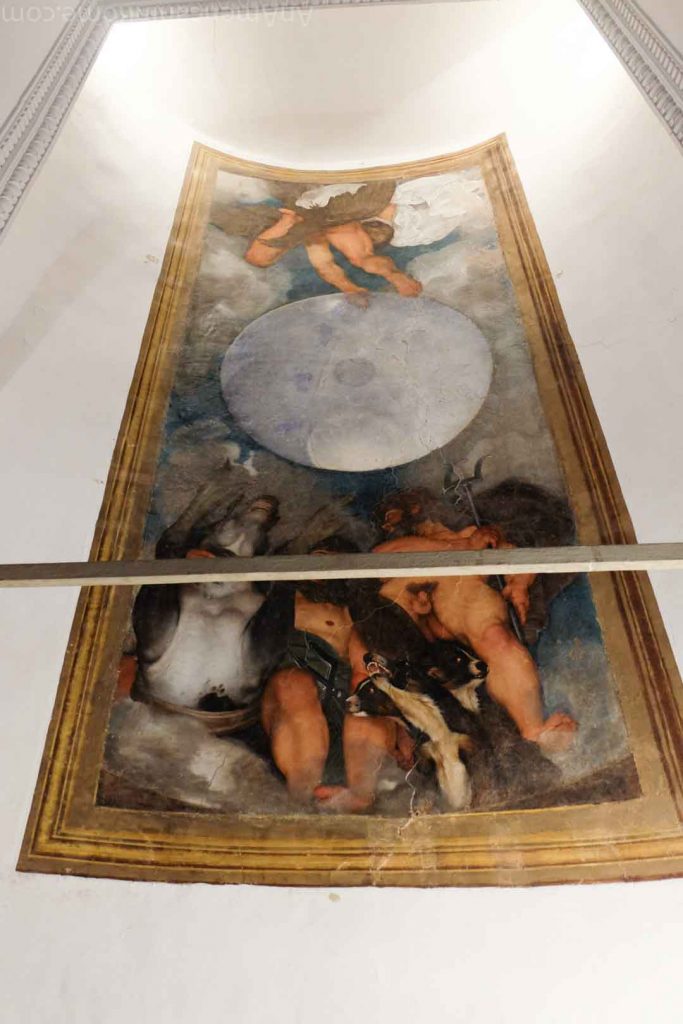 The work was commissioned by Cardinal Francesco Maria Del Monte, who contracted Caravaggio to paint the three gods Jupiter, Pluto and Neptune on the plaster ceiling of his alchemy lab.

While this is Caravaggio’s only fresco, art lovers will be able to tell you that it is not technically a fresco. Fresco is Italian for “fresh” because a true fresco is painted onto fresh plaster that has never been allowed to dry. This, however, was painted by Caravaggio using oil paints, directly onto the dried plaster of the villa’s ceiling.

Every figure in the painting has Caravaggio’s own features and all three are considered to be self-portraits. Except for the dog – but the dog is modeled on Caravaggio’s own canine companion. 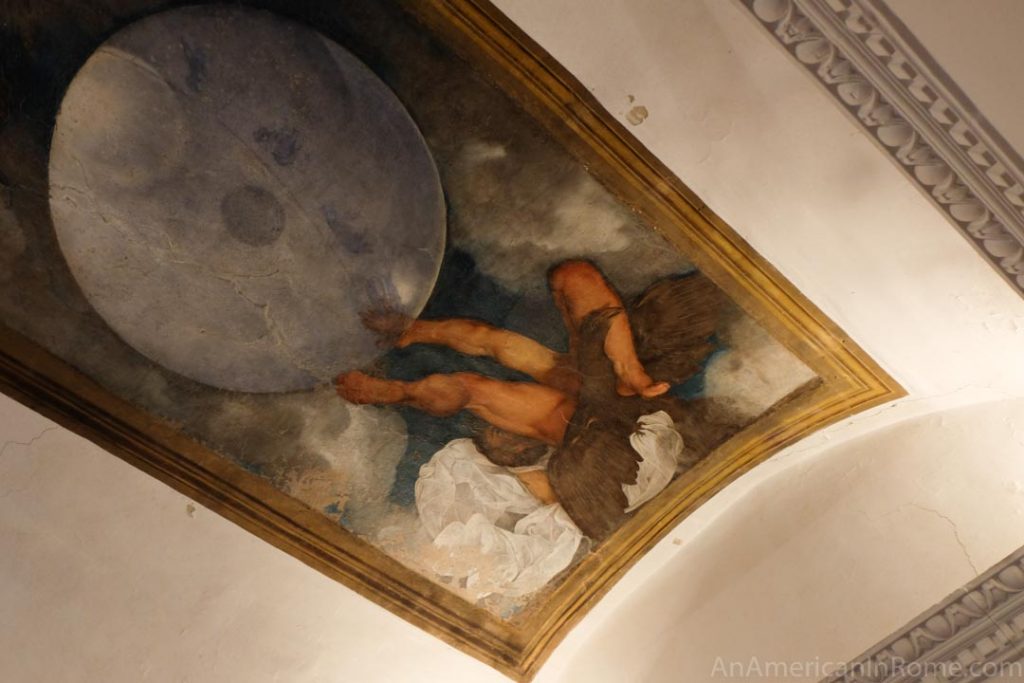 This priceless artwork was not to everyone’s taste. At some point in history, the fresco was whitewashed over. This might have something to do with the full frontal male nudity that Caravaggio included here.

Luckily, it was rediscovered in the 1960s. It is located in a small hallway (or anteroom) and takes up most of the ceiling in the narrow space. The Princess mentioned that she now uses the area when she does yoga. (What an incredible place to work out, no?)

How to Visit Villa Aurora

It is humbling to visit the Ludovisi Villa. There are lots of masterpieces to be seen in Rome, but it is rare that you are invited into someone’s home to see a masterpiece in such an intimate setting. 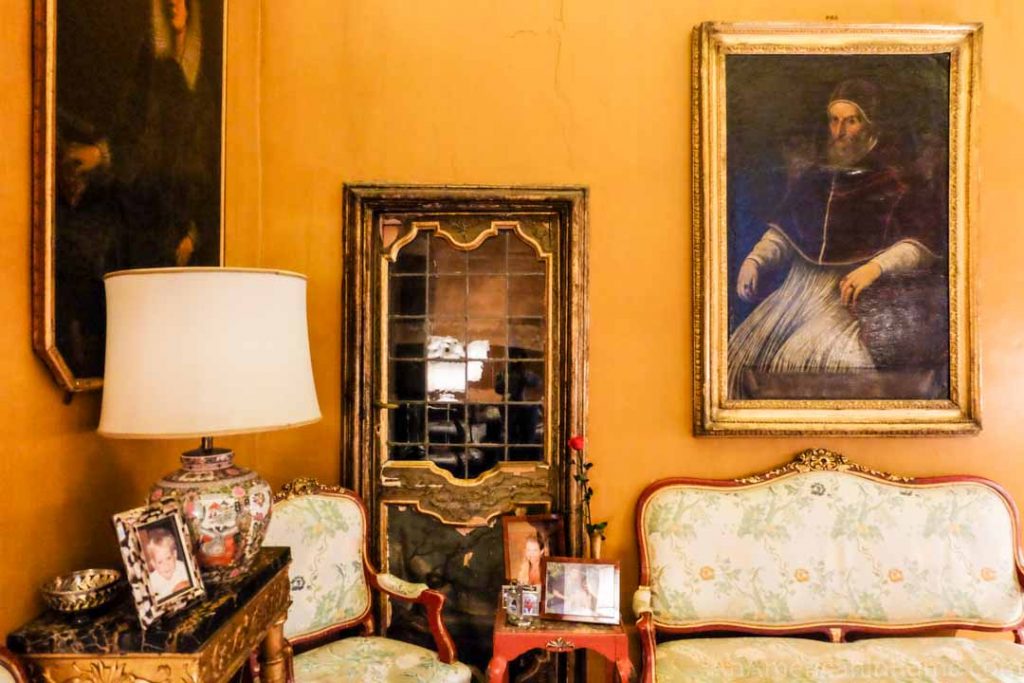 There are works by Guercino and Caravaggio, but also family photos dotting side tables and mixed in with the period furniture.

The villa was first built as hunting lodge in 1570 and now takes up a cool 32,000 square feet on some of the most valuable real estate in Rome. If you visit Villa Aurora, you will be given a tour of some of the front rooms on the ground floor, take a quick peek at the gardens, and then head upstairs to see the Caravaggio fresco and another room that is still being renovated. 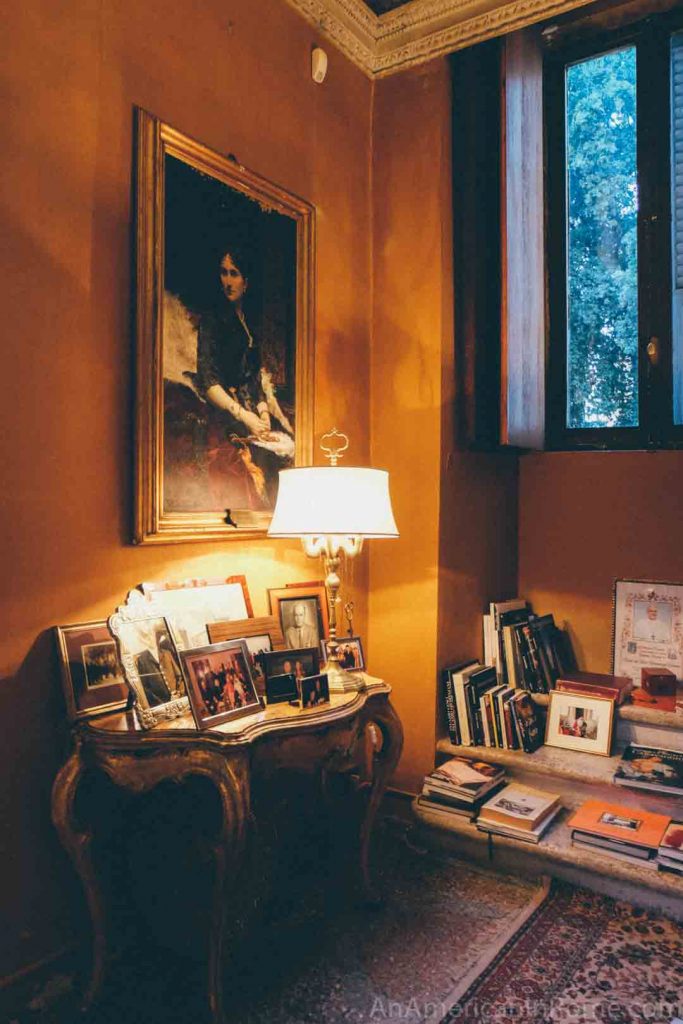 It is only possible to visit Villa Aurora with a pre-arranged private tour that the princess will lead herself. This is because this is still the Ludovisi family’s home.

The cost is €300 for a private tour which lasts about 1.5 hours. For that fee, up to 15 people can visit (€20/person). It is worth it to get a group of like-minded friends together to explore the villa because it is your only chance to ever see a Caravaggio fresco. You can also spring that much for a smaller group, or a truly private tour.

You might be lucky enough to be surprised by the chance to see their archives at the end of the tour. If you don’t get to see the letters from Marie Antoinette (!!) in person, you can browse the Ludovisi digital archives here. 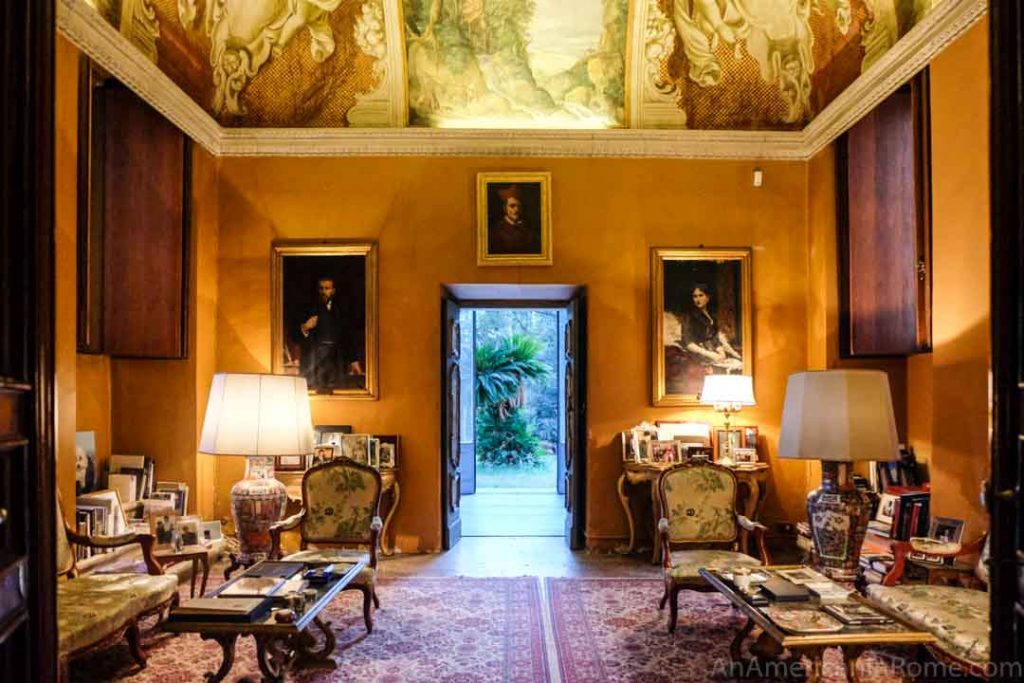 There are other ways to see Caravaggio painting in Rome even if you are not able to arrange a visit to Villa Aurora. One of my favorites hangs in a church in Piazza del Popolo, and there are several famous paintings at Palazzo Barberini. However, it is worth effort to meet the princess and see her one-of-a-kind Caravaggio fresco.

One thought on “Villa Aurora in Rome: A Royal Home with a Caravaggio Fresco”