You can instantly tell that something special is happening as soon as you take your first bite at Imago. The Michelin-starred restaurant atop Hotel Hassler is known for the creative flavors that Chef Francesco Apreda dreams up to serve to guests while they gaze out over the domes and rooftops of Rome.

Apreda was born in Naples, worked first in pastry, then quickly moved up at the Hassler Hotel, before moving to London and then Japan before ultimately returning to Imago as Executive Chef. 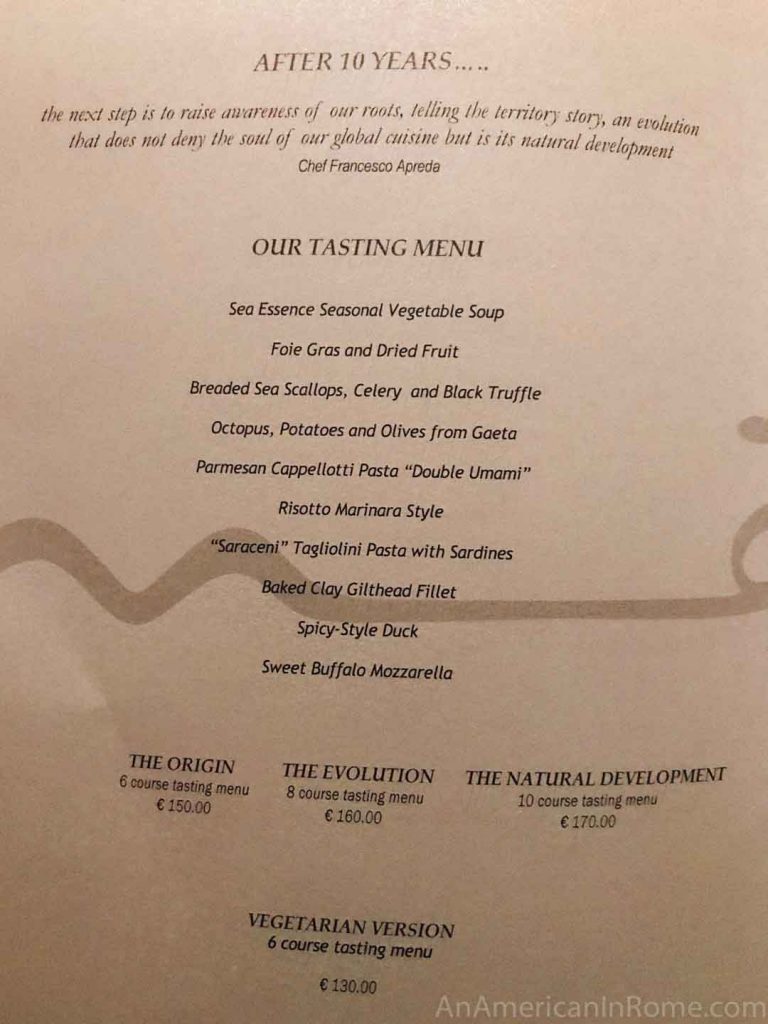 Chef Francesco Apreda brings a bit of all of his experience to the menu that he has created at Imago. The classic tasting menu is all about Italian cuisine, but when the dishes actually arrive in front on you, you get to literally taste the influence that these around-the-world postings have had on the chef’s ability to play seamlessly with flavors and textures.

In addition to the menu itself, Imago is most famous for its view. The sixth-floor restaurant has a panoramic view out over the Spanish Steps and across most of the Eternal City. It was the first ever rooftop restaurant to open in Rome in the 1950s (back when the Dolce Vita crowded wanted to sit at the street level to see and be seen).

The Tasting Menu at Imago 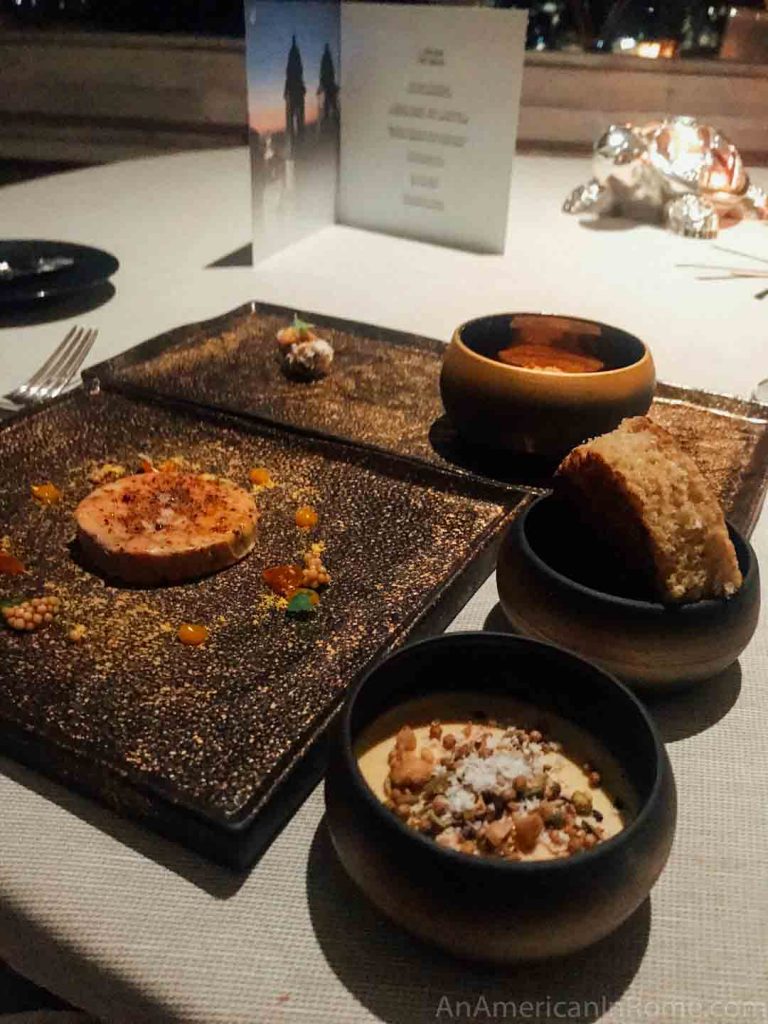 Our meal at Imago began with foie gras four ways. The incredibly rich pate was presented as a medallion served with a touch of dried fruits, and even wrapped up in a tiny cannolo with a surprising hit of wasabi and ginger.

My favorite tasting plate came next: a breaded scallop with truffle somehow perfectly inserted inside.

I could have eaten 10 of these instead of one. 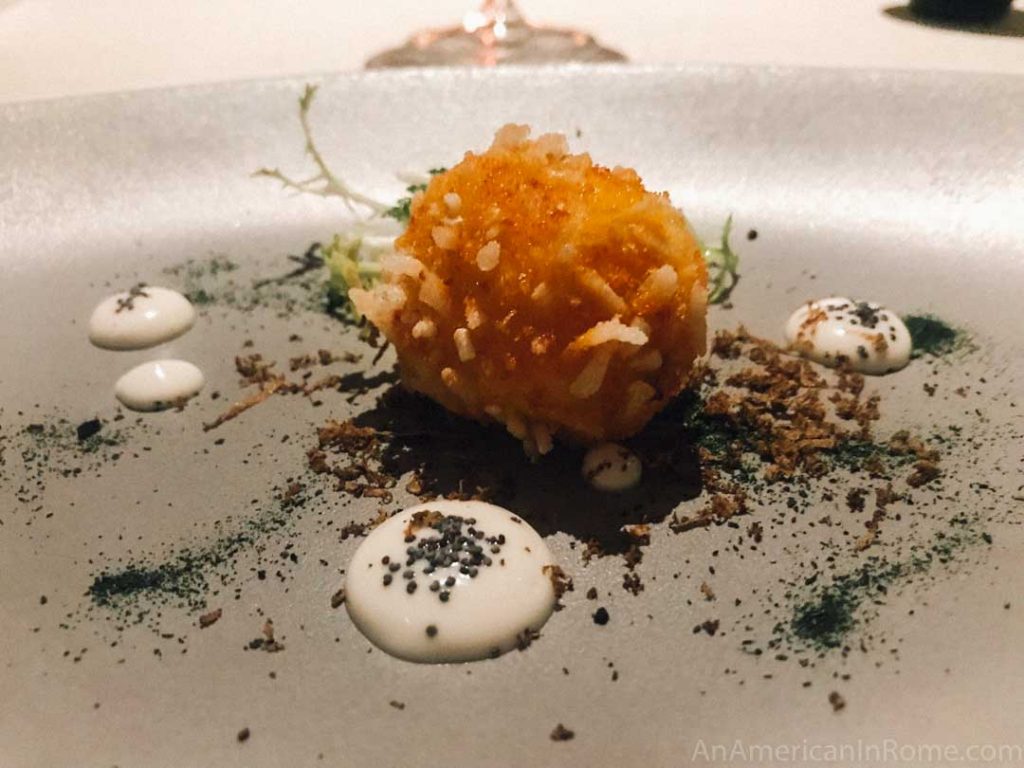 After my beloved truffle scallop came the cappellotti pasta. The mix of flavor inspirations that Chef Apreda is known for drawing from at Imago was best in this dish.

The traditional Italian pasta was stuffed with aged Parmigiano Reggiano, but the broth was based on a Japanese style broth and made with tuna and edamame.

The two strong flavors of fish and cheese were perfectly harmonized and unexpected. 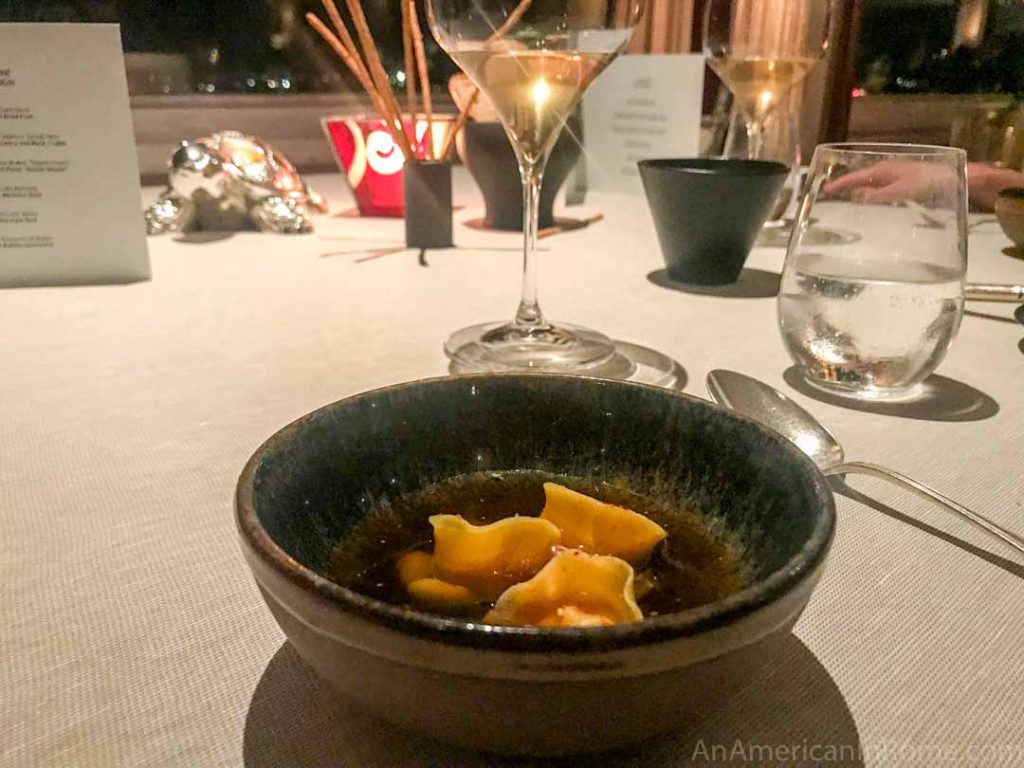 In keeping with the Italian setting and roots, the next dish is a risotto alla marinara and the only thing that I could say over and over is “this tastes like pizza!”

The dried and dusted spices here were so intense it was almost like having a pizza-flavored pringle. Of course, the risotto itself was perfectly prepared. I liked this dish, but I was more intrigued by how Imago achieved the final taste than I was in love with the flavors themselves. 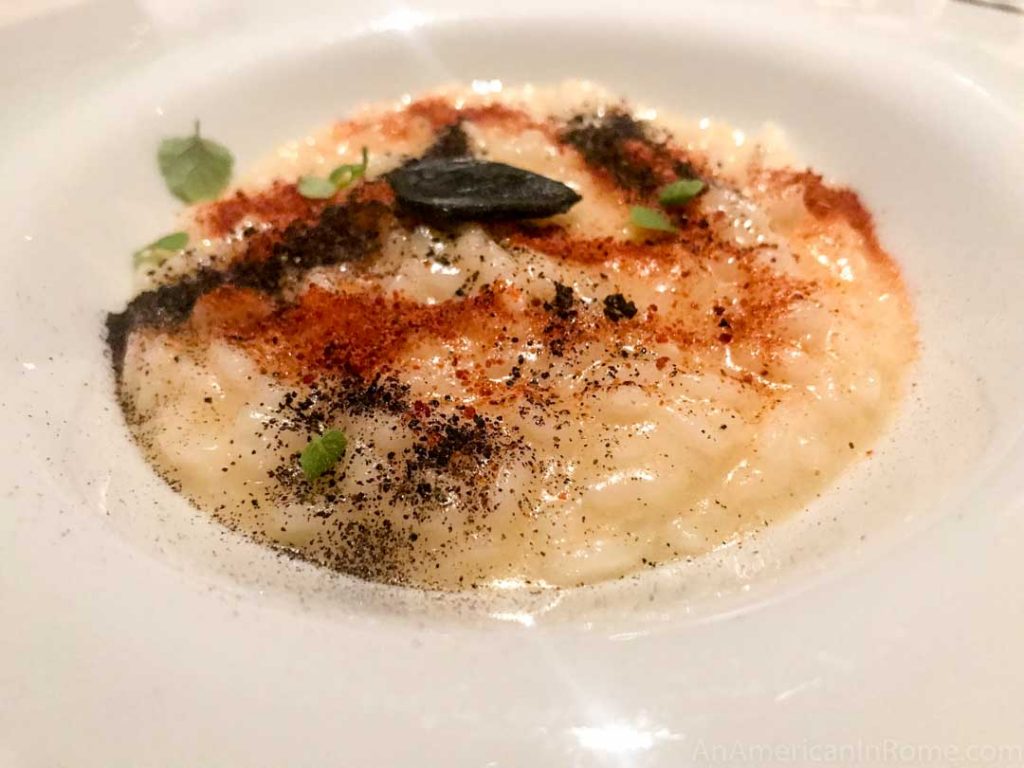 The main course was a tender slice of duck with a tastefully charred seasonal side. This dish seems the most untouched, letting the ingredients speak for themselves. 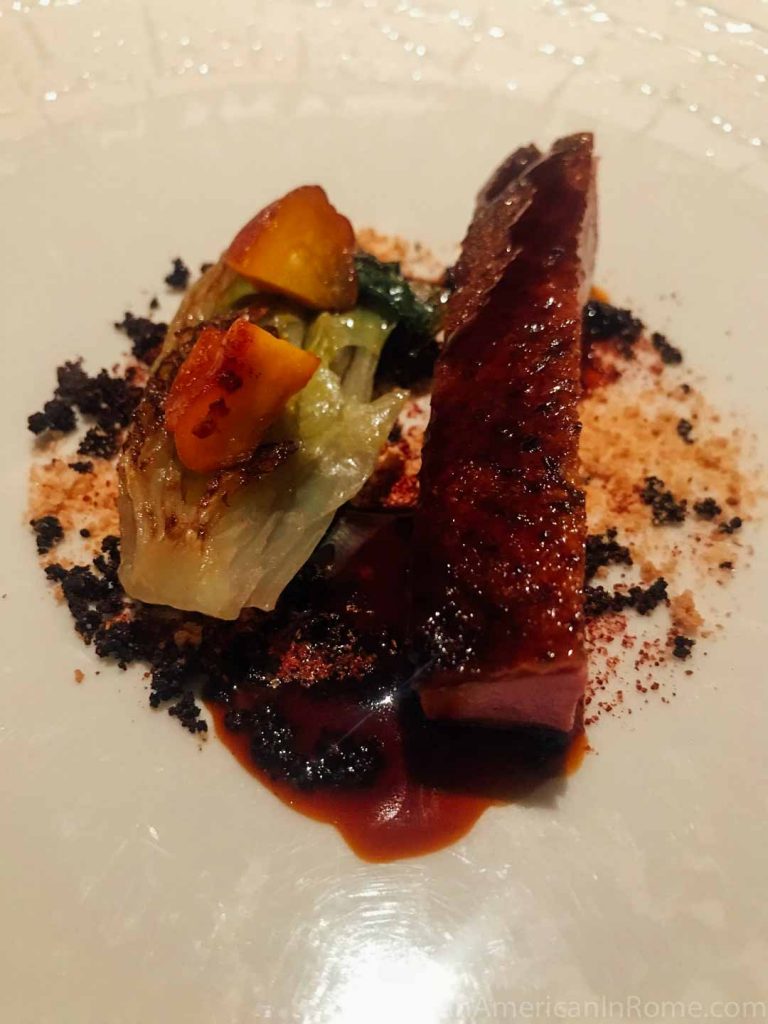 I have heard that some people are disappointed by the desserts at Imago, but I really enjoyed the sweet mozzarella – partly again because of the sheer element of showmanship. How is it so perfectly a ball of mozzarella (and a perfect nod to the Chef’s hometown) – but also so delicately sweet? 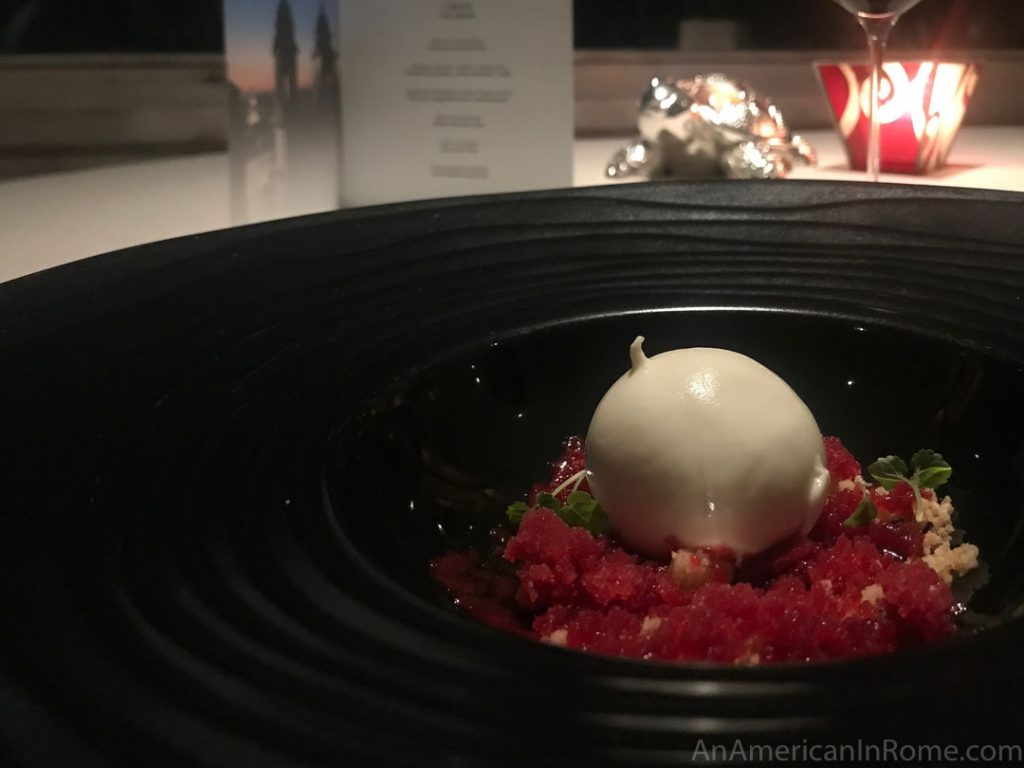 As is the case with many other fine dining experiences in Rome, dinner at Imago wraps up with several sweet bites to linger over.

The final boxes of desserts play up the Japanese influences a bit more, both in terms of presentation and in terms of the flavors incorporated into each. 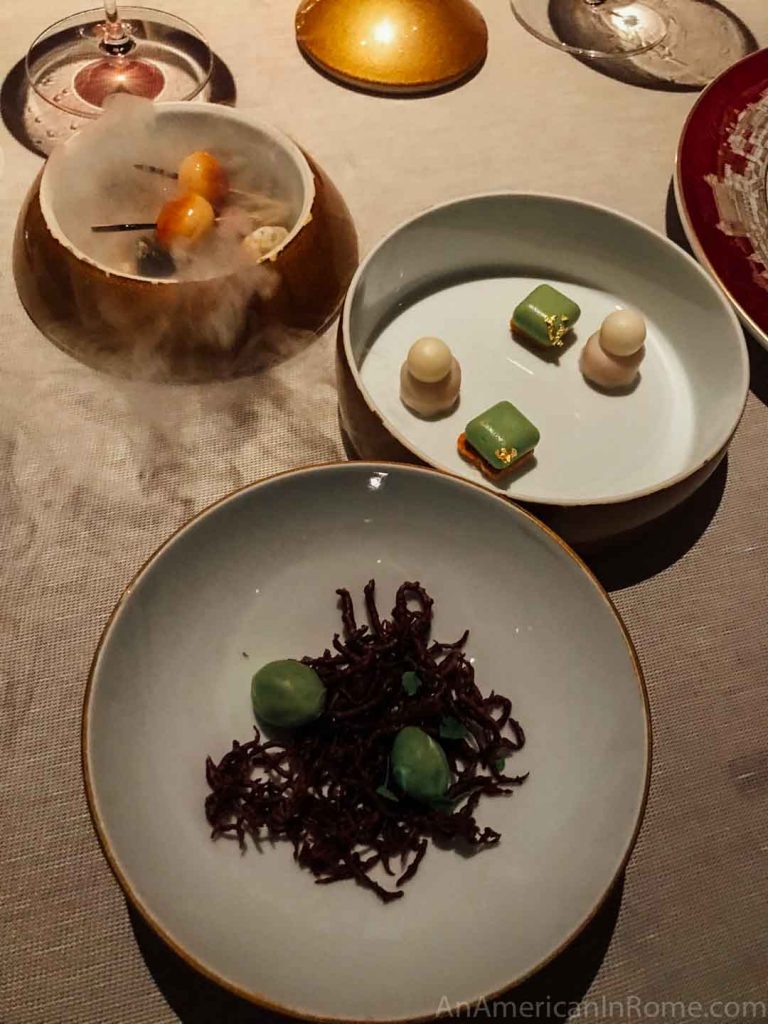 As the gourmet Michelin-starred restaurant at one of Rome’s most famous hotels, dinner at Imago comes at a price. The basic tasting menu above is €150 per person before adding wine. The selection of dishes is a good introduction to Chef Apreda’s obvious talent and ability to play with spices and ingredients from around the world, and meld them with Italian traditions.

That does not mean that you will necessarily fall in love with every dish. However, the other reason that Imago is often worth the splurge for a night out in Rome is the ambiance. The service is wonderful and attentive (though we were left with some unanswered questions about a funny glass of wine).

The tables are also widely spaced out, and each has an impressive view from the windows overlooking the city. The effect is a kind of privacy and intimacy that might help you fall into your own little romantic world.

I was a guest of Imago on behalf of Fodor’s but everything here is my own honest opinion of the dining experience. 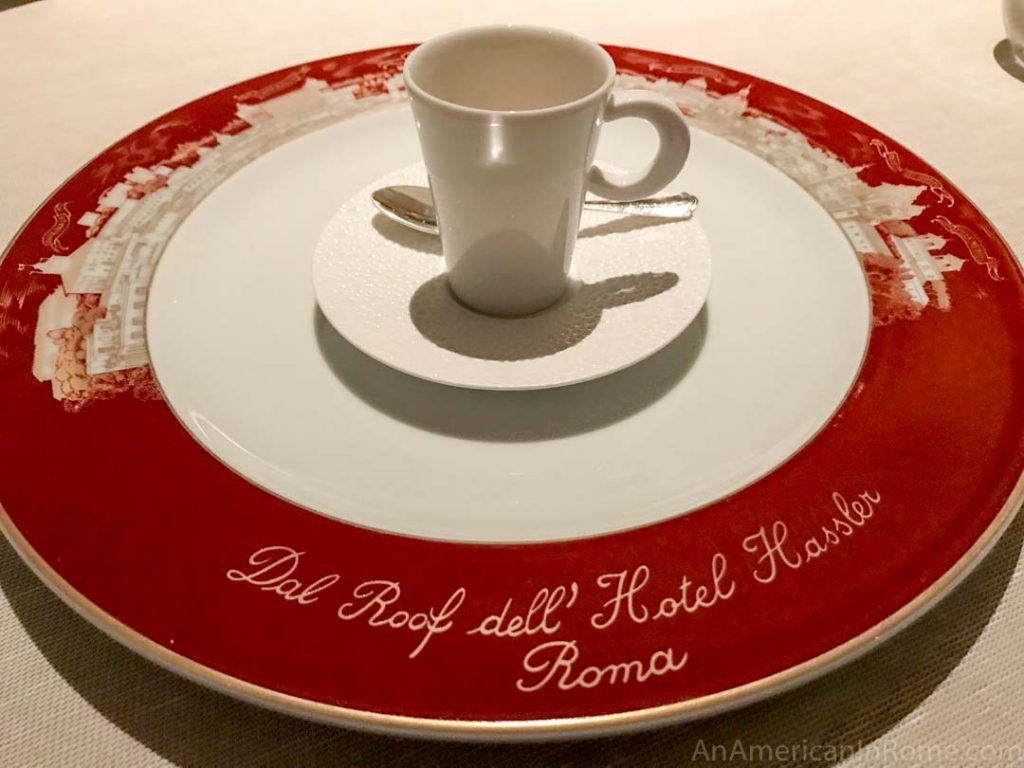 Update 21 February 2019: It has just been announced that Chef Apreda will be leaving Imago. His exact departure is unclear but it is expected to be by May 2019.

Reservations required. Men must wear a jacket to dinner.

2 thoughts on “Imago Restaurant at the Hassler Hotel in Rome”