My plan to get married in a castle did not quite work out.

Obviously, the next best thing is a palace.

Unfortunately, I didn’t get married in a palace either.  Such is life.

However, one of the perks of living in Rome is being able to visit a palace whenever you damn well please.

There are palaces a-plenty. 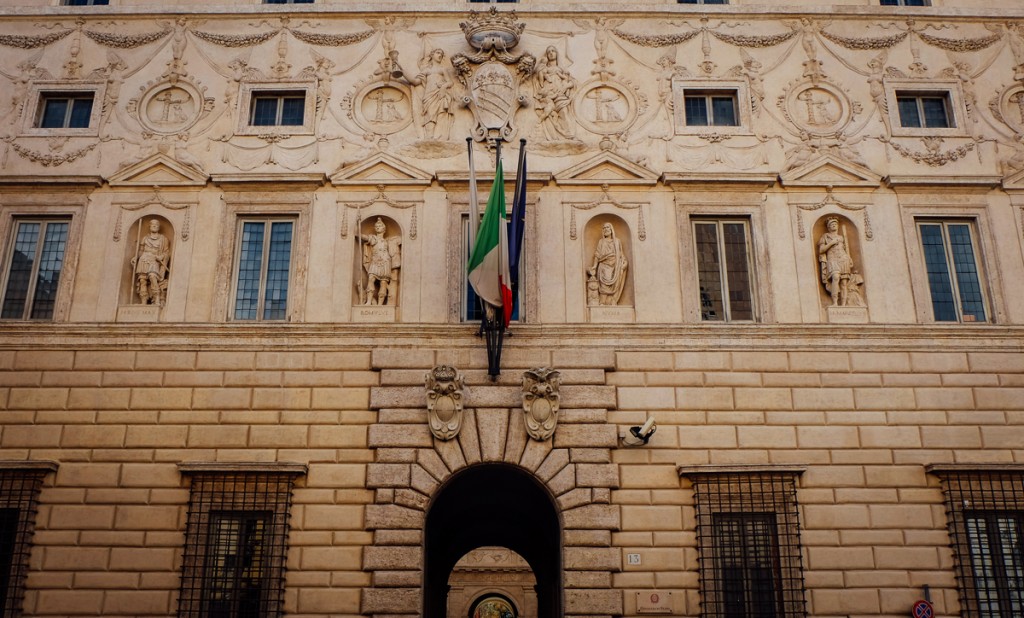 Palazzo Spada is located in heart of the city, a few minutes walk from Campo de’ Fiori.  You may well be able to spot it based on its gorgeous facade as long as you are paying enough attention to look up from the cobblestones.

The lovely stucco decorations continue in the courtyard, which is usually closed by a gate. However you can peak through for a sense of the architecture. 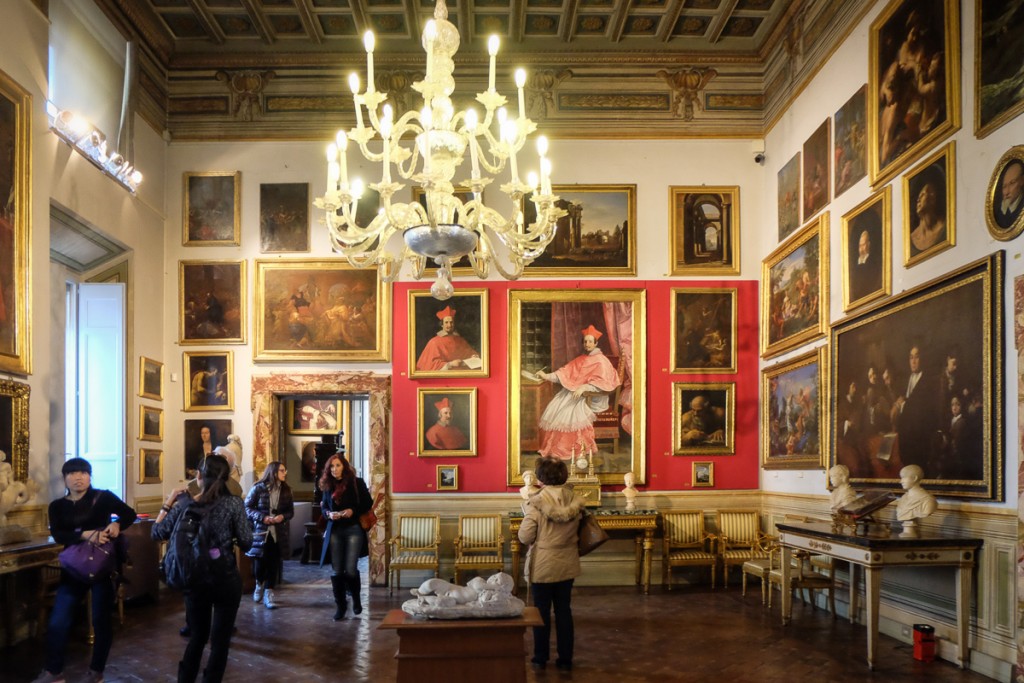 The inside is not terribly shabby either.

After purchasing a €5 ticket (€2.50 if you are an EU citizen under 25), you can climb the stairs to the first floor which houses the Galleria Spada. 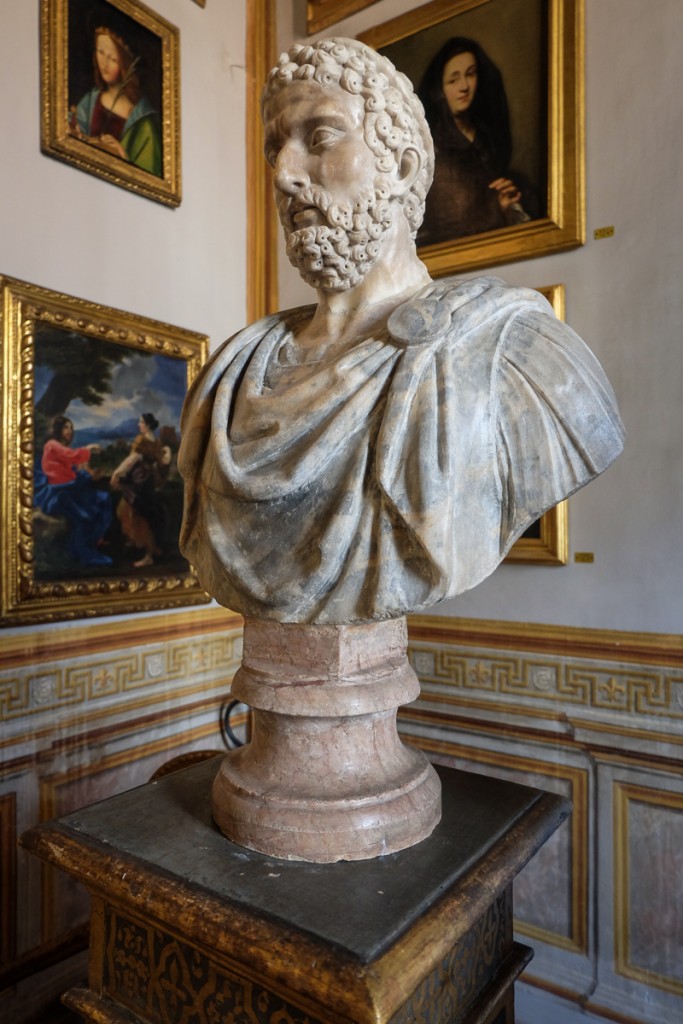 The palazzo and the galleria are named for Cardinal Spada, the man who transformed the palace after he purchased it in 1632. 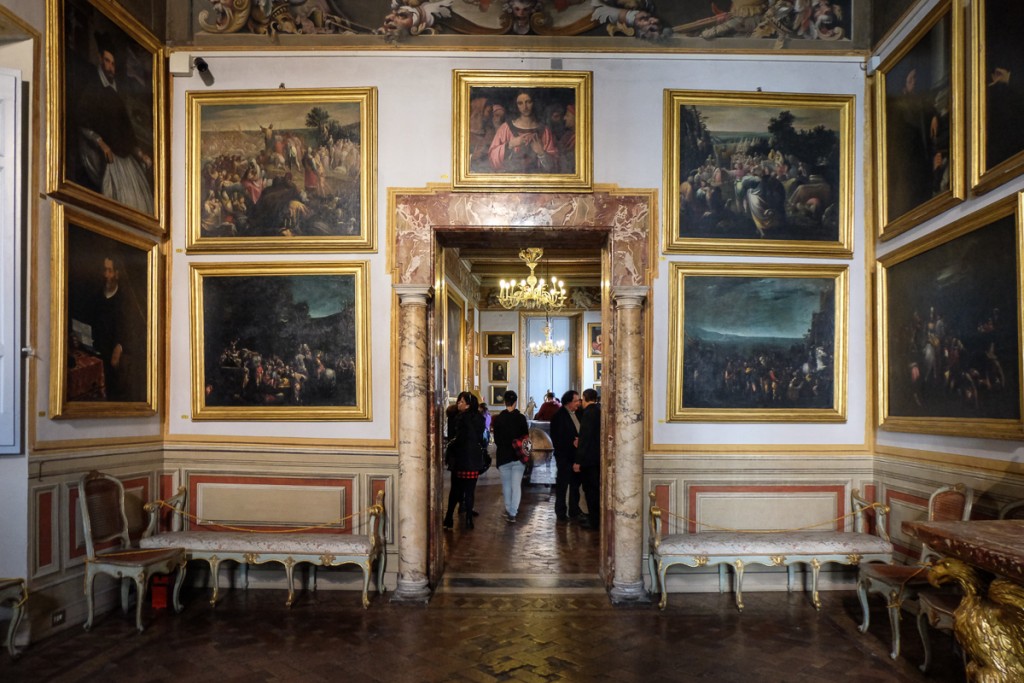 The Church was big business to afford the luxury of such a living space, and Spada did not let that space go to waste. 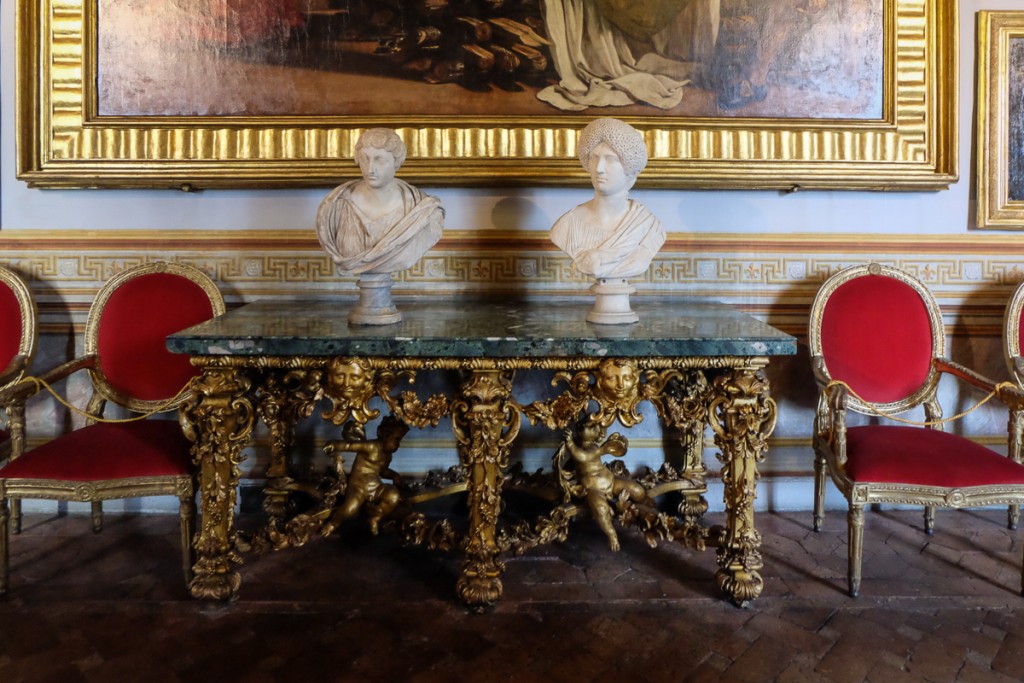 The gallery stretches through four rooms, filled with 16th and 17th century work by the likes of Caravaggio, Reubens and Titian. 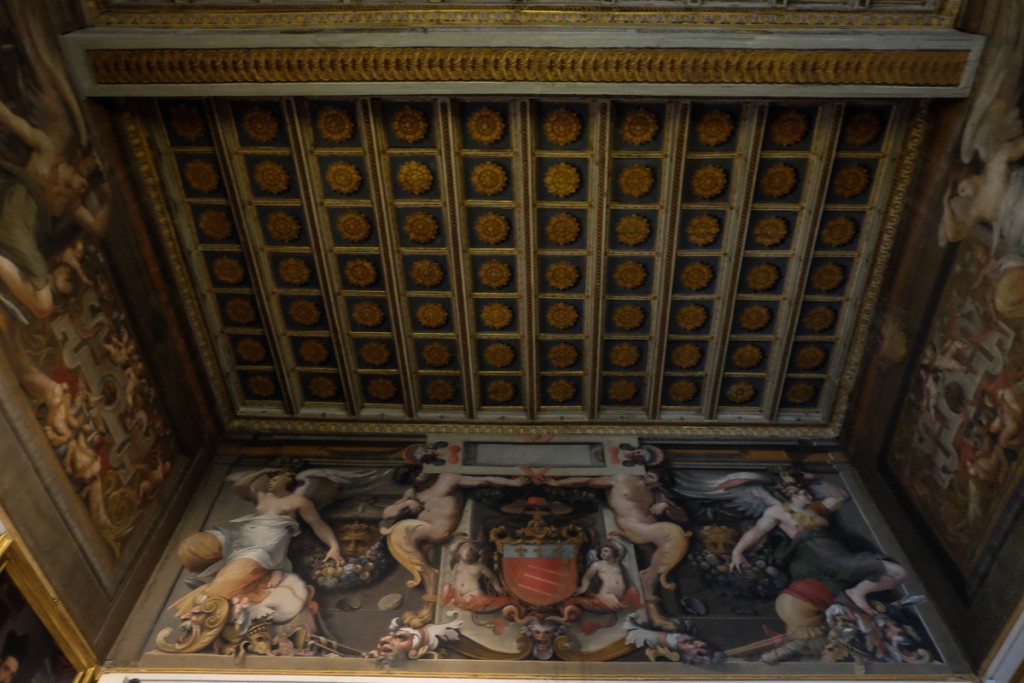 While the art collection is no joke, the real draw is the architecture. I loved spotting details like the ornate carved ceiling-  similar to the ceiling of Palazzo Farnese which is just up the street.

When Cardinal Spada purchased the palazzo, he quickly hired Borromini to redo it for him.

The master architect added a trick – the forced perspective in the internal courtyard.

How long does this corridor look? 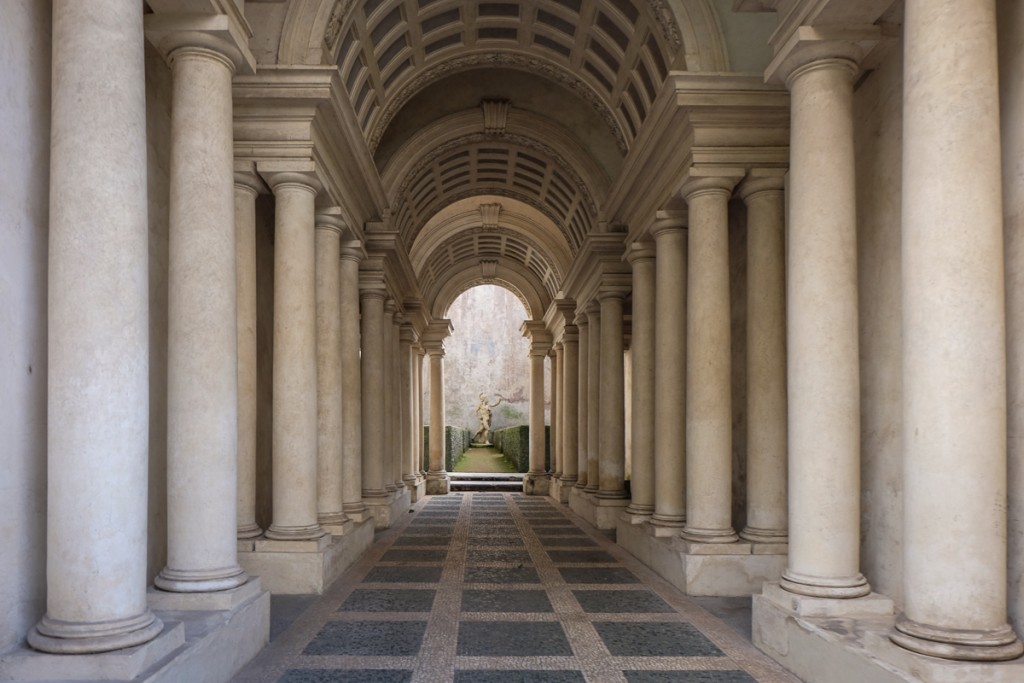 And the statue? How tall do you think it is? 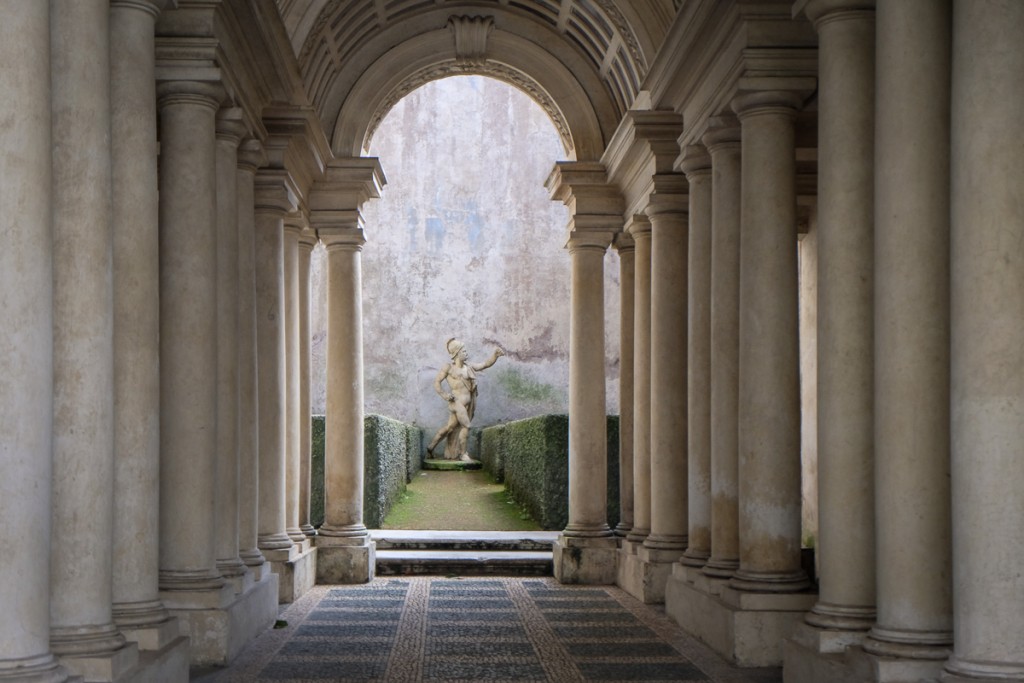 The ceiling at the end of the colonnades is so low that only a child would be able to stand. 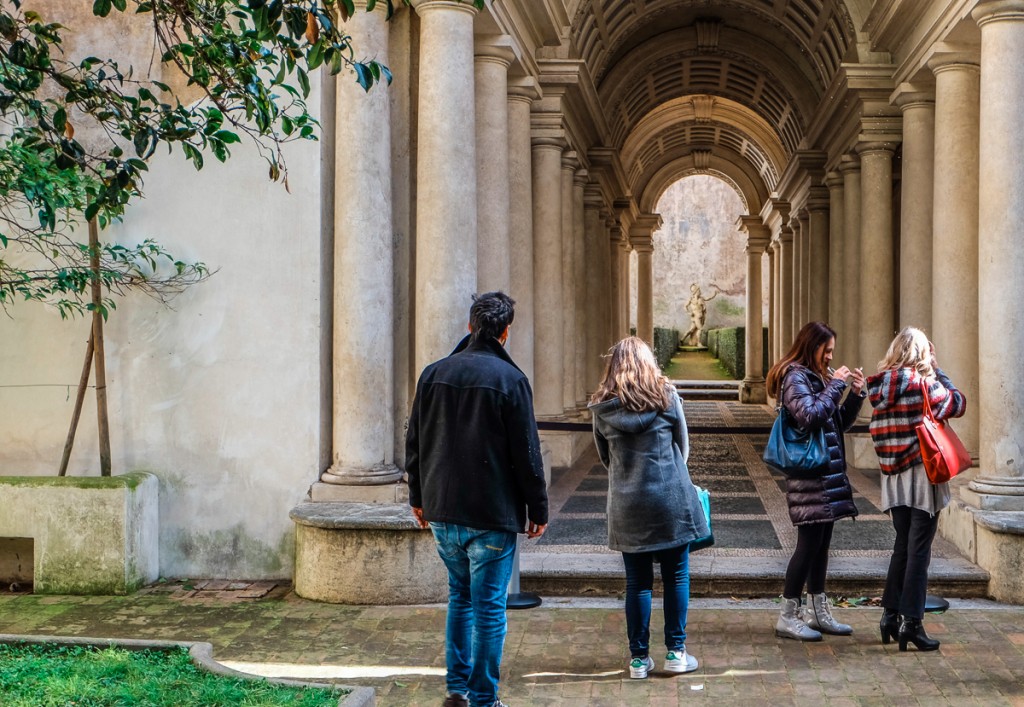 The optical illusion is so unnecessary which it was makes it so fun. Why did Borromini do it? To show off his wit?

The complicated, mathematics of the tunneling archways were the work of a perfectionist.

Unfortunately, that perfectionist Swiss architect was also sometimes described as ‘neurotic.’  In 1667, he stabbed himself in the neck with his own sword.

Borromini died with many of his works unfinished, but visiting The Perspective at Palazzo Spada offers a wonderful glimpse at his genius, and is one of the most under-visited sites in Rome.

It is also free the first Sunday of the month! Which is when I went, naturally.

13 thoughts on “Unexpected Rome: The Perspective at Palazzo Spada”