The US has three Embassies in Rome.

There are ambassadors to Italy, to the Holy See and even to the United Nations.

But it’s the French who really know what’s up, and in 1936 they were smart enough to lease Palazzo Farnese to house their Embassy for 99 years, for 1 Euro a year.

That is by far and away the best deal on the Roman rental market. 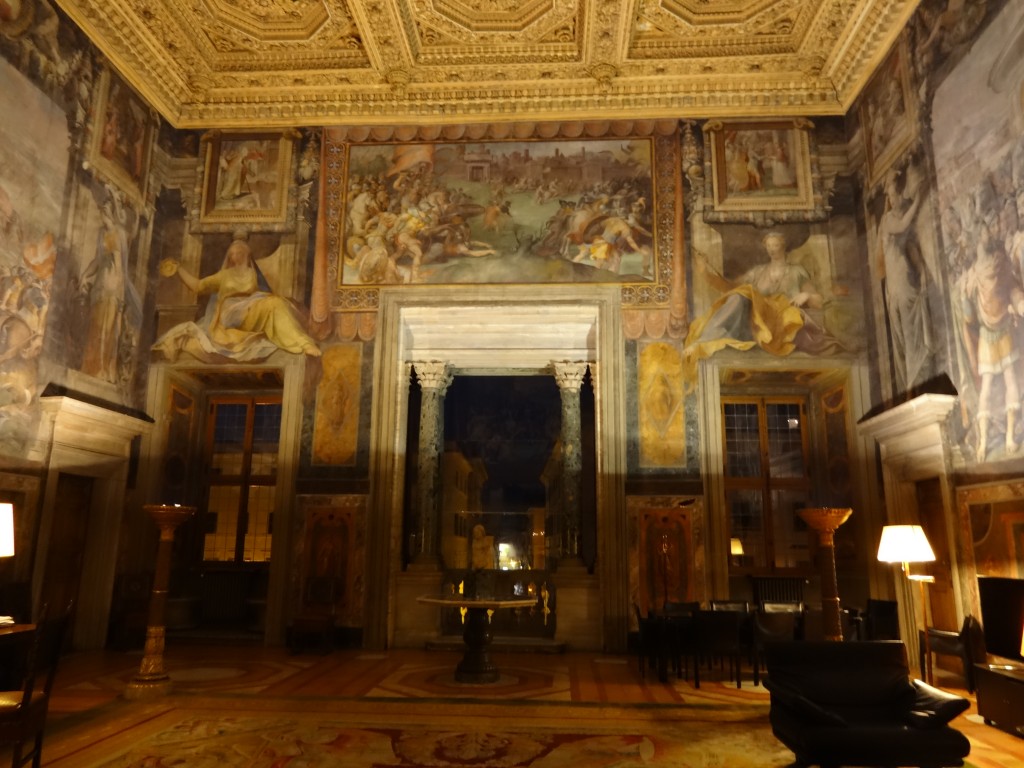 Palazzo Farnese is fit for a Pope, as it should be since it was built by an ambitious Cardinal who became Pope Paul III. 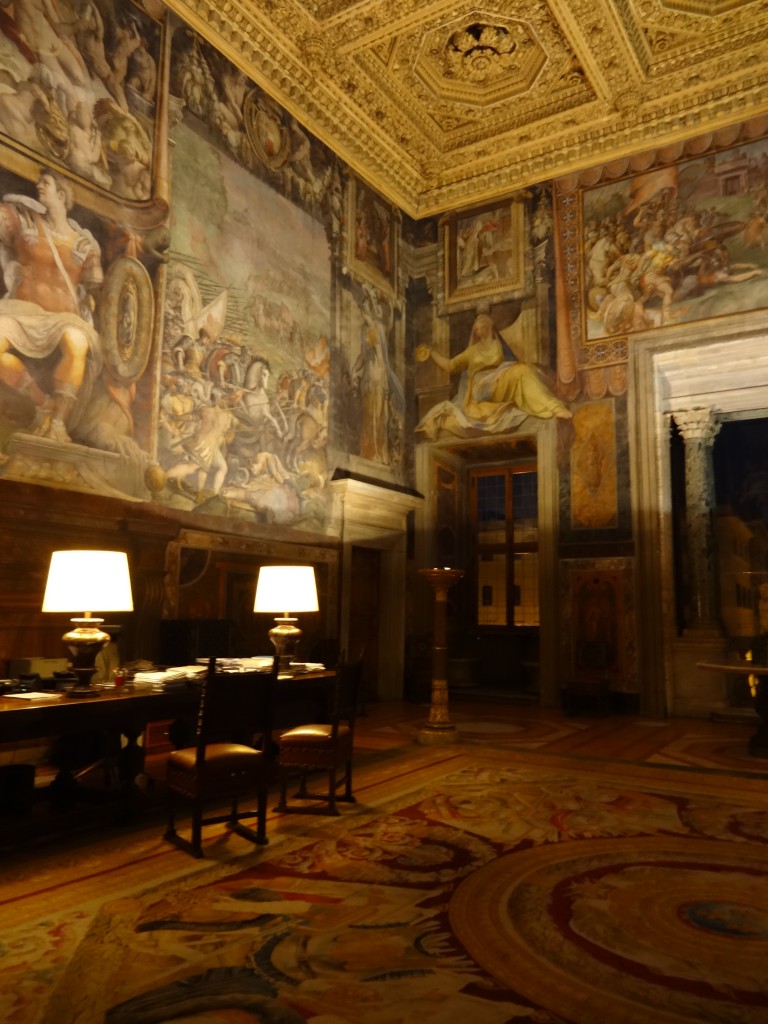 When we visited, I was struck by the intricate carved ceilings.  We were there after normal business hours, but this room is now the office of the French Ambassador.  I cannot imagine getting anything done in room like this. I would just stare at the interior details all day.  Incredible frescoes, gorgeous ceilings and lovely textiles. 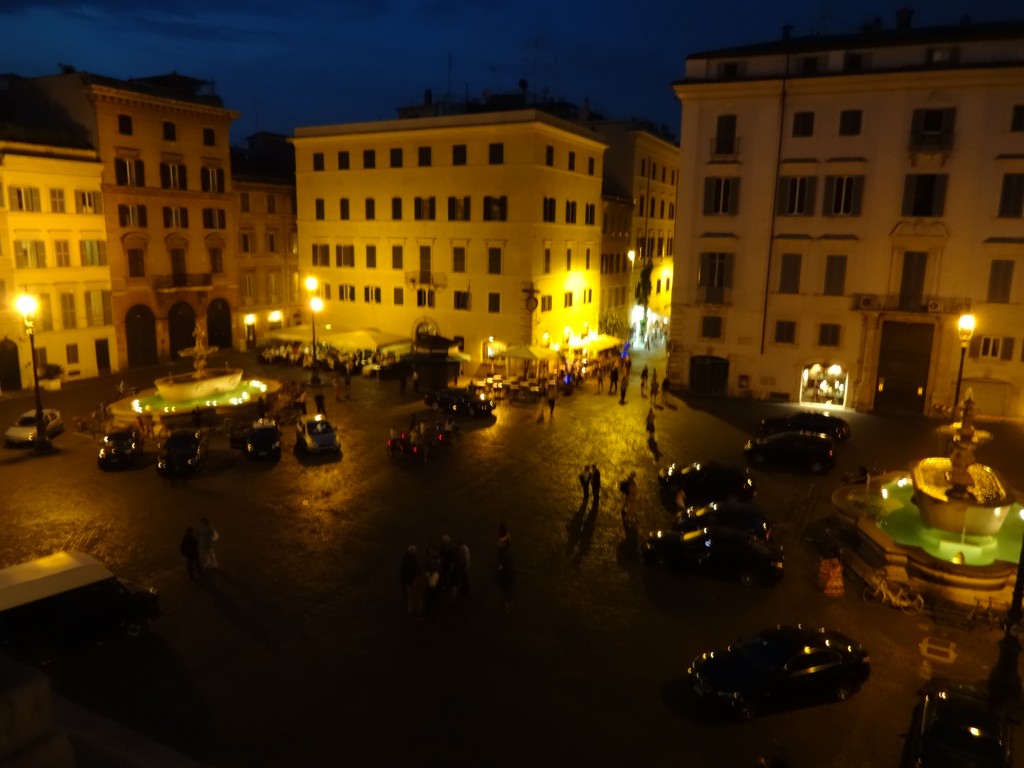 If you ever managed to tire of the interior (I doubt it), you could gaze out over Piazza Farnese.  What a job.  (There might be more to being an ambassador then sitting in beautiful places with beautiful people, but I doubt that). 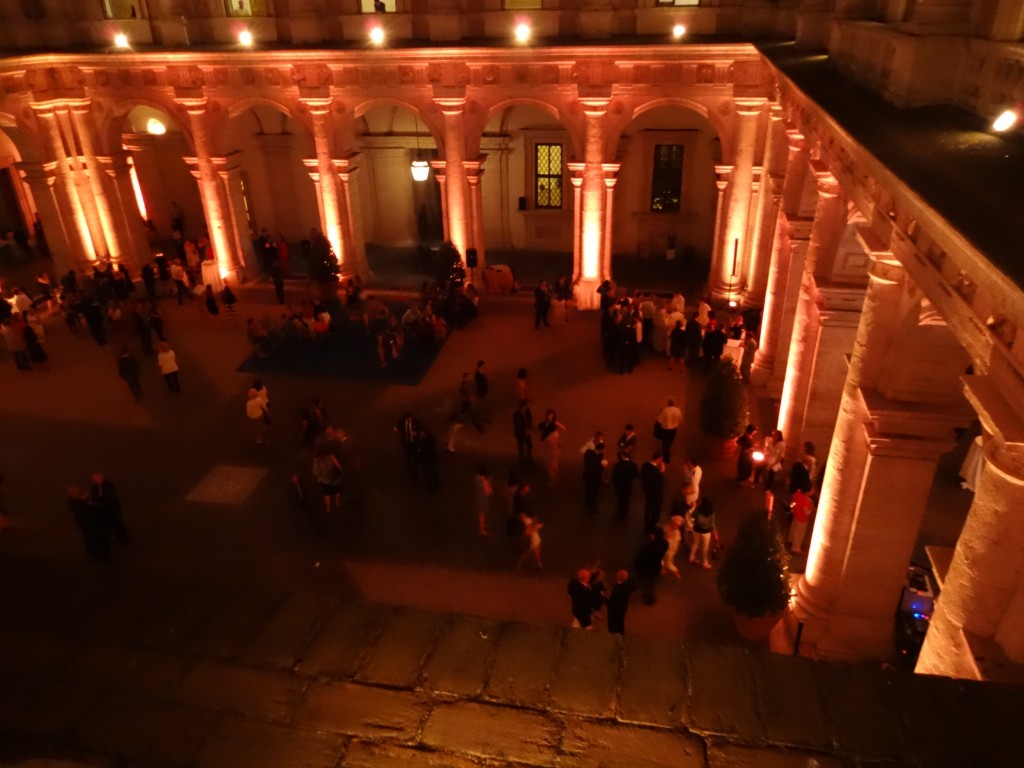 Exploring the palazzo at night is incredible. 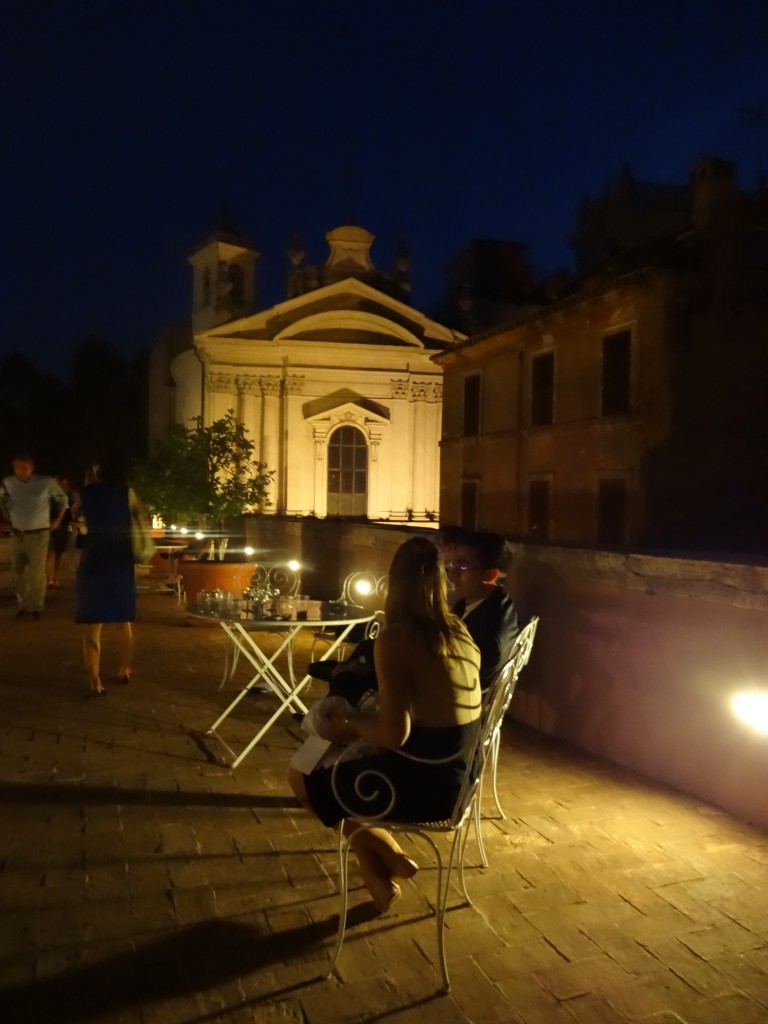 My favorite area was the bridge, which stretches out over Via Giulia. You know the one I’m talking about. 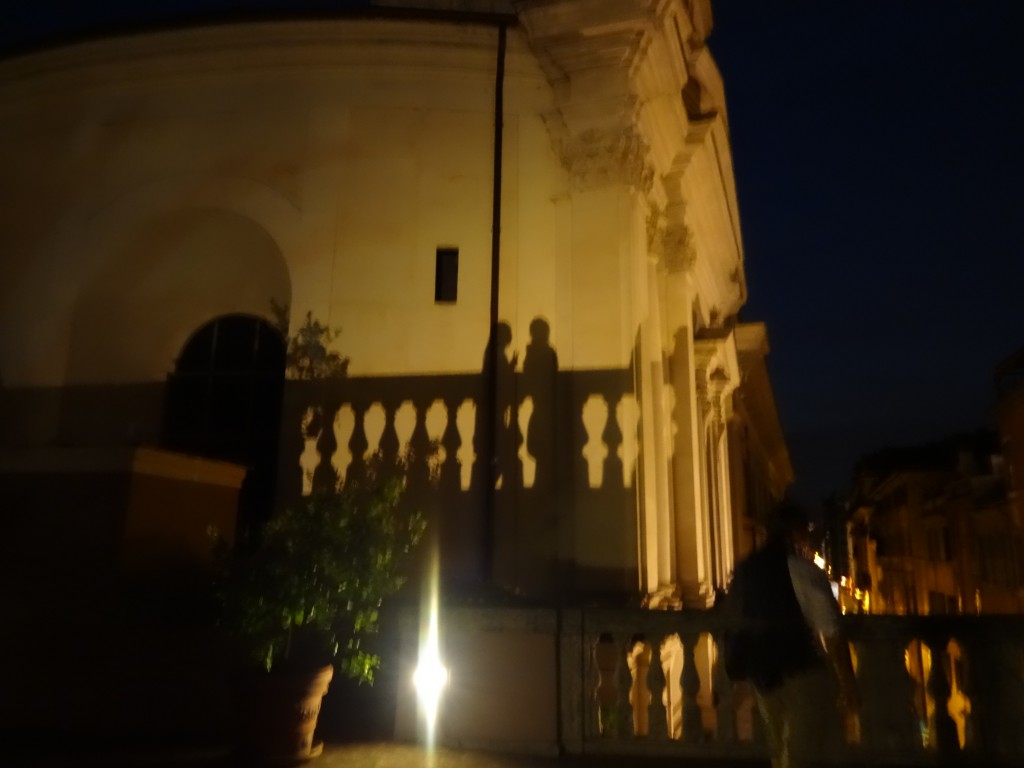 I couldn’t resist a selfie, projected onto the church next door. 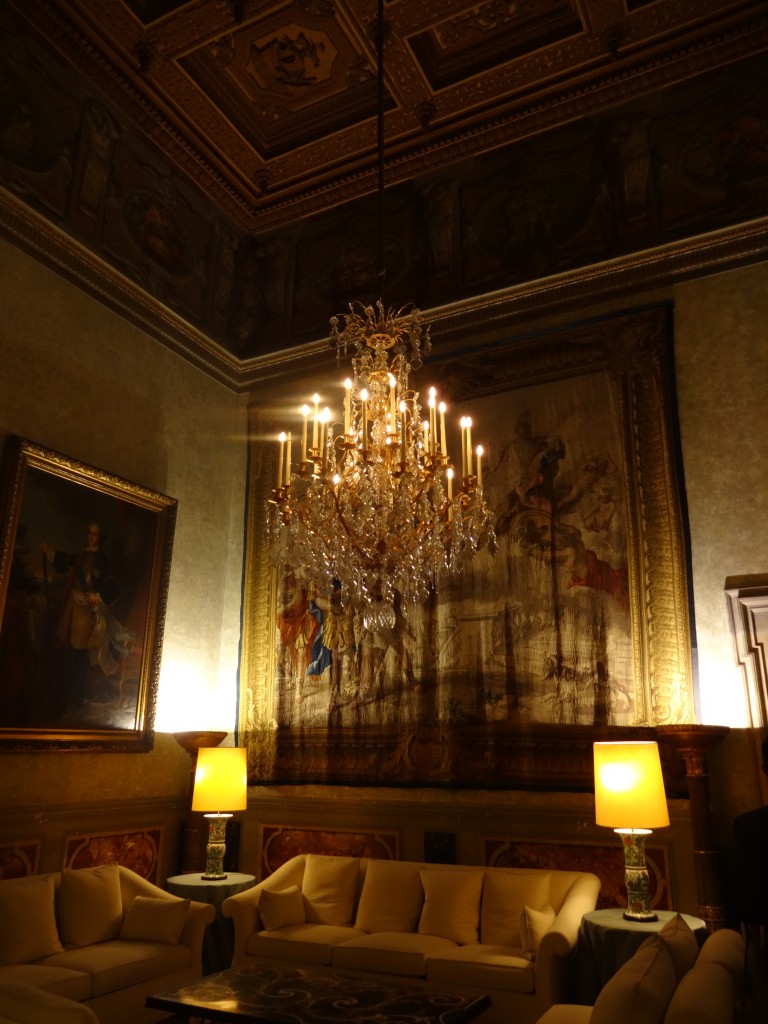 And to visit on the 14th of July, France’s national day? Magical. 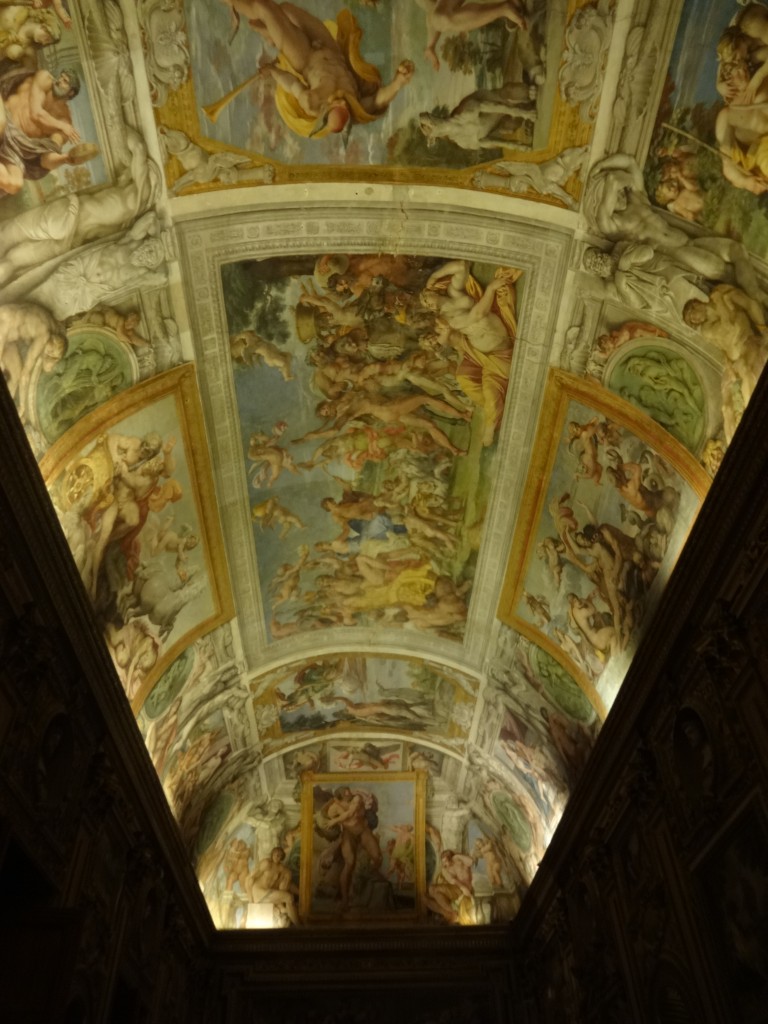 Palazzo Farnese is normally closed to the public, being a working government building and all. If you’d like to visit, there are weekly opening hours but you should be sure to reserve at least a week in advance. Tours are only offered in English on Wednesdays, and can be booked online at www.inventerrome.com. Total cost: 5 euro.

It is an incredible Roman landmark and I felt very lucky indeed to finally see inside.   I felt even luckier to get an invite to Bastille Day celebrations, with free champagne and macaroons.

A million thanks to the generous friends who invited us.

The French really do have it all figured out.

9 thoughts on “Inside Palazzo Farnese in Rome”