October did not go quietly.

The weather was perfect – l’ottobrata romana – an Indian summer. We had perfect blue sky days and took advantage by exploring the city. 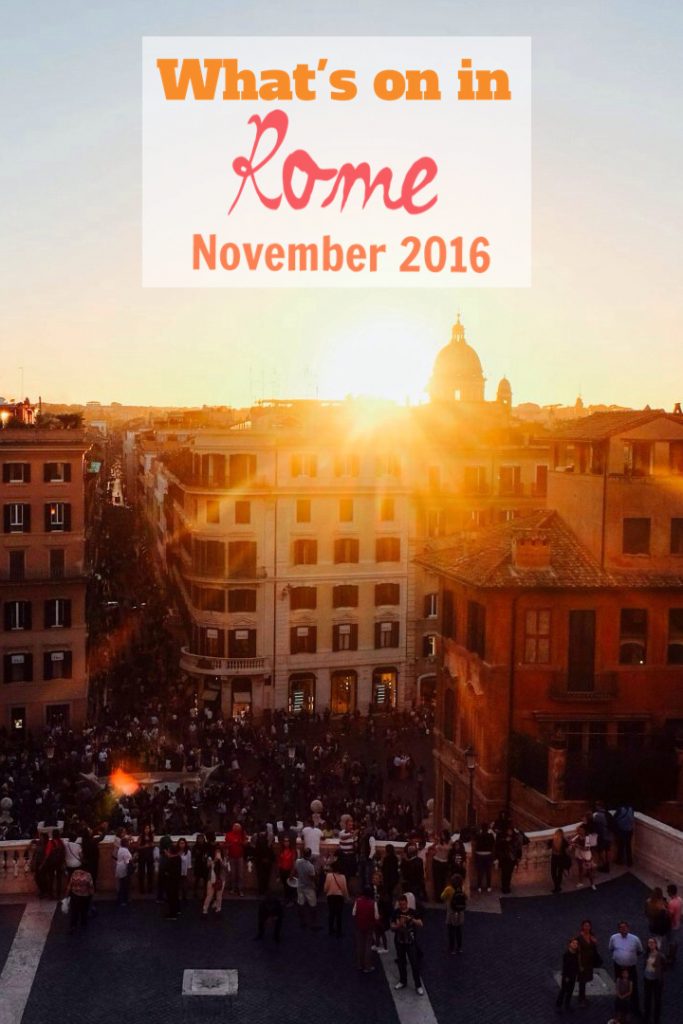 Just when we were all feeling pretty good about ourselves, central Italy was hit by a series of earthquakes. The first two occurred last Wednesday, forcing residents from their homes.

Then on Sunday, I was sitting at my desk at 7:40 am when I heard an unsettling thud.  My California training kicked in and I was on my feat and in a doorframe in a second, watching the light fixture sway back and forth while our kitchen door swung on it hinges. A 6.6 quake, in the same area of central Italy destroyed the cathedral in Norcia, but thankfully there were no deaths.

We are hoping that November will be a quieter month, seismically.

Socially, however, there is plenty to do this November in Rome.

A lantern festival, natural wine tastings, jazz festivals and even a 10k for you activity seekers – here is what is on in Rome in November:

1 November: A national holiday in Rome – All Saint’s Day (Ogni Santi). Expect closures of government buildings and many businesses.

1 November: La corsa dei santi is a 10 km run that will take place in the center of Rome in honor of All Saint’s Day. The run starts at St. Peter’s Square.

4-6 November: Arts in Rome is hosting a three-day sculpture workshop in multiple languages.

6 November: Take advantage of domenica al museo, the first Sunday of the month, when many of Rome’s museums and landmarks are free. These include the Colosseum, Palazzo Spada, Palazzo Barberini, Galleria Borghese (with reservation) and Palazzo Braschi (with Roman ID).

6-23 November: The Roma Jazz Festival returns to the city with nearly three weeks of concerts scheduled at various venues in Rome. For a line up and tickets see the website.

11 November: Ever dreamed of going to school in Rome? The American University of Rome is hosting an open day from 3 – 7 pm to tell you more about their degree programs.

12 November: Expect all talk to turn to rugby as the All Blacks come to play Italy at Stadio Olympic. Tickets are still available.

12-13 November: Participate in an olive harvest and cooking class in nearby Sabina. Come for the day and learn techniques from an expert chef, or treat yourself to an entire weekend at the villa.

, will be hosting an autumn flavors cooking class at Latteria Studio in Trastevere. If you want to try creating Florentine food in Trastevere, booking is essential.

19-20 November: More than 80 natural wine producers will gather at the Westin Excelsior for Vignaoili Naturale a Roma. If you are interested to sample a range of wines, I would suggest going. I have been to a previous edition and was able to try wines from all over Italy. Tickets are €20 for one day or €35 for both days, and should be purchased through the website in advance.

21 November: Emily Jane White will be live at Blackmarket as part of the Unplugged in Monti series this month. Only 50 seats are available so booking is essential.

26 November:  Currently being rescheduled in February.

29 November: Join Shahzia Sikander for a conversation at film screening at the American Academy in Rome. The lecture begins at 6:30 pm and will include a screening of Bending the Barrels, a video series that examines life at the Pakistani Military School of Music in Abbottabad.

Ongoing Exhibits this month in Rome:

This post will be updated as more information about November events in Rome becomes available.