It is dangerously easy to think of Rome as the Colosseum and the Pantheon, with perhaps a trip across the river to visit Vatican City. The truth is that there is so much more to see and experience if you know more about all the different Rome neighborhoods.

I searched high and low for a guide to Rome neighborhoods when I moved here many years ago because I had no idea what to expect from San Lorenzo – my first home in the Eternal City. What I have learned from my time living there and in Testaccio, plus many jaunts around the city, is that each neighborhood in Rome feels like a distinct little village.

Planning to get around to explore as many as possible? I have included the closest metro stop if you want to see each neighborhood and here is the Rome metro guide to help you navigate!

Or, if you prefer to narrow it down, here the top 5 areas to stay in Rome. 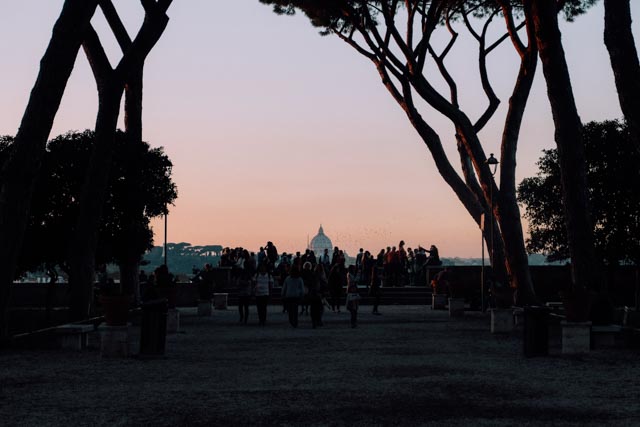 The refined neighborhood of Aventino is home to embassies and elegant homes. Quiet and tree-lined, there is almost nothing in the way of bars or shops on the Aventino hill itself. However, the area does boast both the lovely Orange Garden and seasonal Rose Garden (see the Parks section), and the secret keyhole with views towards Vatican City. Along Viale Aventino, there are contemporary fusion restaurants and trendy bars serving a mostly international crowd of young professionals who work at the nearby United Nations building along Circus Maximus.

Located above Trastevere and bordering Vatican City, Borgo would have been home to the likes of Michelangelo while he worked on the Sistine Chapel. The neighborhood’s border is marked by a medieval wall which runs from the Vatican to Castel Sant’Angelo on the edge of the Tiber. Today, the historic area remains charming but is increasingly overrun by souvenir shops and forgettable eateries. 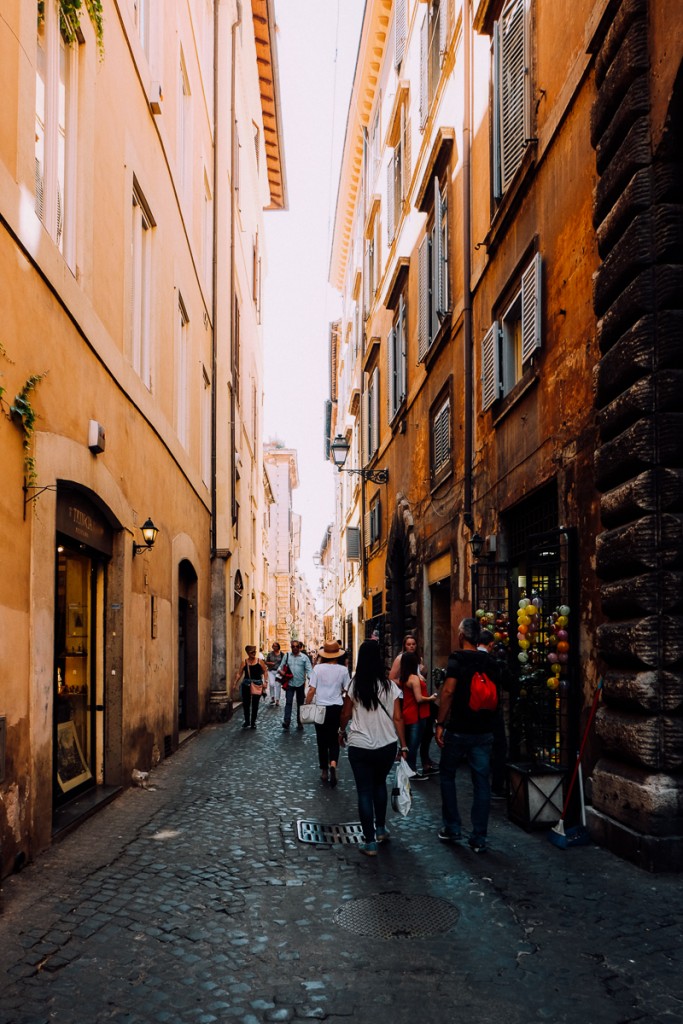 Rome is actually made up of numbered rioni, or administrative areas, which divide the center of the city. However, when it comes to the historic center (or “centro storico” in Italian), most of these smaller areas are simply lumped together. Luckily, the centro is easy to navigate by foot. Stay near the Pantheon and you will find yourself 5 minutes from the Trevi Fountain in one direction and 5 minutes from Campo de’ Fiori in the other. The incredible location makes it a great place to stay during a trip to Rome. It may not be the cheapest option, but it is certainly not a bad one. The one drawback is that you will be so comfortable that you might not make it OUT of the center. This would be a shame since Rome has so many interesting and distinct neighborhoods to explore. Oh, also, no metro stops. Your closest options will be the Colosseum (line B) or the Spanish Steps (line A).

Esquilino is where you will find the largest of Rome’s seven hills. In Ancient Roman times, it was one of the imperial neighborhoods. Slightly more recently, after the unification of Italy in 1861, it was the home of wealthier classes who copied the architectural style of Torino’s royal class and built large public squares ringed with porticoes. Today, the neighborhood is one of the most multicultural in Rome and is the best place in the city to find non-Italian food. Close to the main train terminal (Termini station), Esquilino is undergoing a small renaissance with new cafes and bars moving into previously neglected storefronts. Notable sights include Santa Maria Maggiore – one of Rome’s four major basilicas. 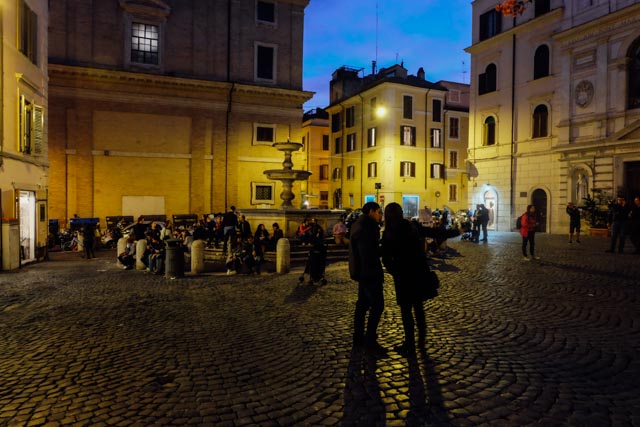 Sandwiched between the Colosseum and Via Nazionale, Monti is picturesque and convenient. The neighborhood boasts great wine bars and boutiques and is walking distance to many of the most important landmarks in Rome. While it is central and well connected to public transportation, it also feels like a little village inside the city. The charming area is distinct and filled with cobblestone streets and ivy creeping up the side of the buildings. The main gather place is in the central square, where young locals meet to start the evening with a BYOB drink. It is a good choice if you are coming to Rome for the first time, though it does tend to lean a little bit hipster.

Built to house workers in the 1920s, Garbatella has some of the most interesting architecture in Rome. At the center of the neighborhood are lotte- small two-level houses built with a communal courtyard. The charming area is unlike the most historic center but still feels weirdly frozen in time. It remains one of Rome’s more traditional neighborhoods and is a stronghold of supporters of the A.S. Roma soccer team. 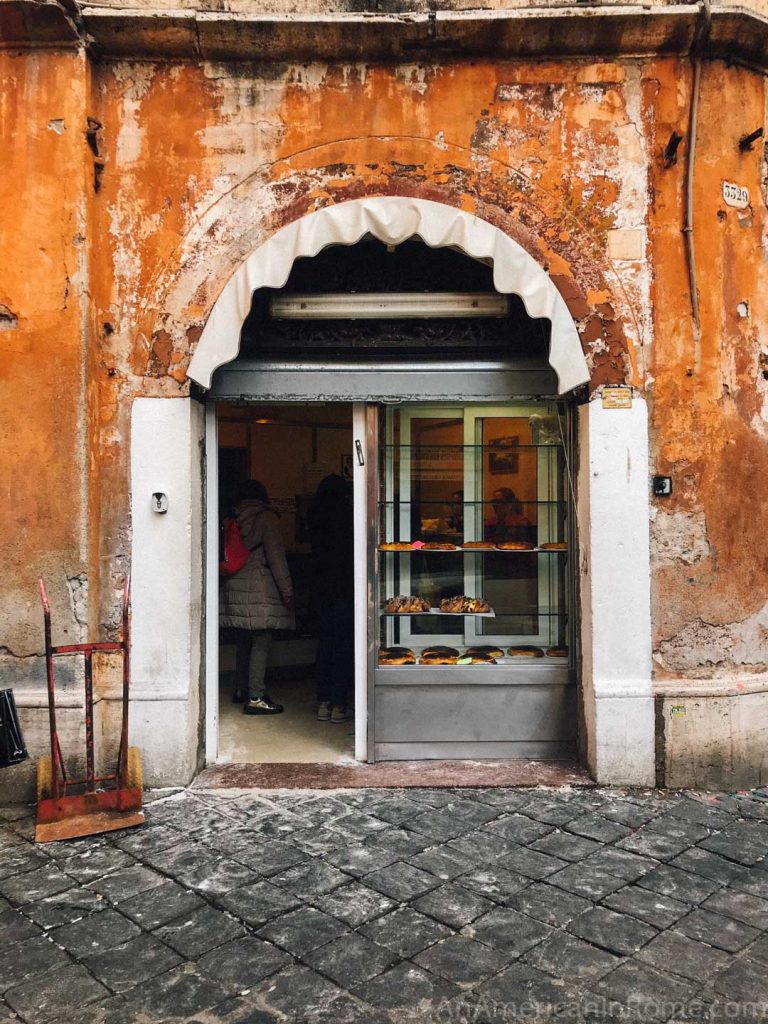 The Roman Ghetto was a Jewish ghetto established in 1555 in the area on the banks of the Tiber near Isola Tiberina. The area was under severe restrictions and controlled by the Pope until 1870. The current neighborhood is full of traditional restaurants which are the best places in the city to try Roman Jewish cuisine. Other major sites in the Ghetto include the ruins of Teatro Marcello and the Portico d’Ottavia, as well as the Synagogue and Jewish Museum.

Metro stop: Nearest metro stop is Colosseo (Line B) but the bus stop Largo Argentina will bring you much closer

Exclusive Parioli is a quiet residential and business district northeast of the historic center. The subdued but fashionable bars and restaurants attract wealthy Romans, but the area’s shining gem is undoubtedly the Villa Borghese park.

Hipster Pigneto was named for the long row of pine trees planted along the wall of the area’s Villa Serventi. The neighborhood was the favorite haunt of film director Pier Paolo Pasolini, who has now gained cult status. Today, Pigneto is an area in flux – still traditionally working-class grappling with a sudden influx of hipsters and the cool cafes and cocktail bars that follow them. The pedestrian area on Via del Pigneto has become a major nightlife destination in the city but every fourth Sunday of the month it still transforms into a large open-air flea market.

Prati offers a taste of traditional, if exclusive, residential Rome. Convenient for Vatican visits or exploring Castel Sant’Angelo, Prati is a quieter side of Rome. It has greenery and wide avenues that are lacking other parts of the city. Metro Line A makes it easy to get into more central Rome, but with great restaurants and an authentic daily market (mercato trionfale), you might be content to stay put and enjoy life as a well-heeled Roman. 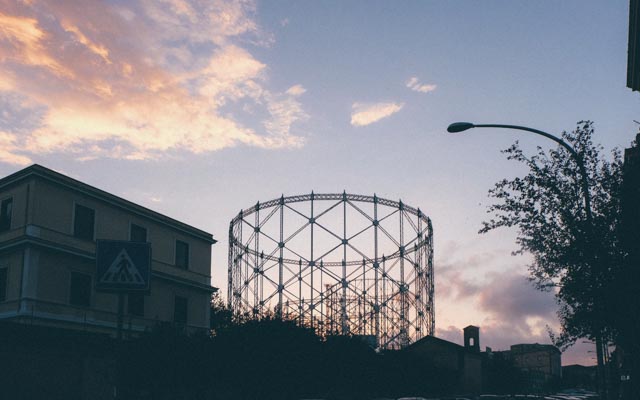 Ostiense is one of the best places near the center to see Rome’s street art scene. The formerly industrial area is slowly modernizing and can now boast craft beer pubs, a cat cafe, and a ramen bar. The landscape of the still changing neighborhood is dominated by the metal gasometro – a structure that once housed the city’s gas. 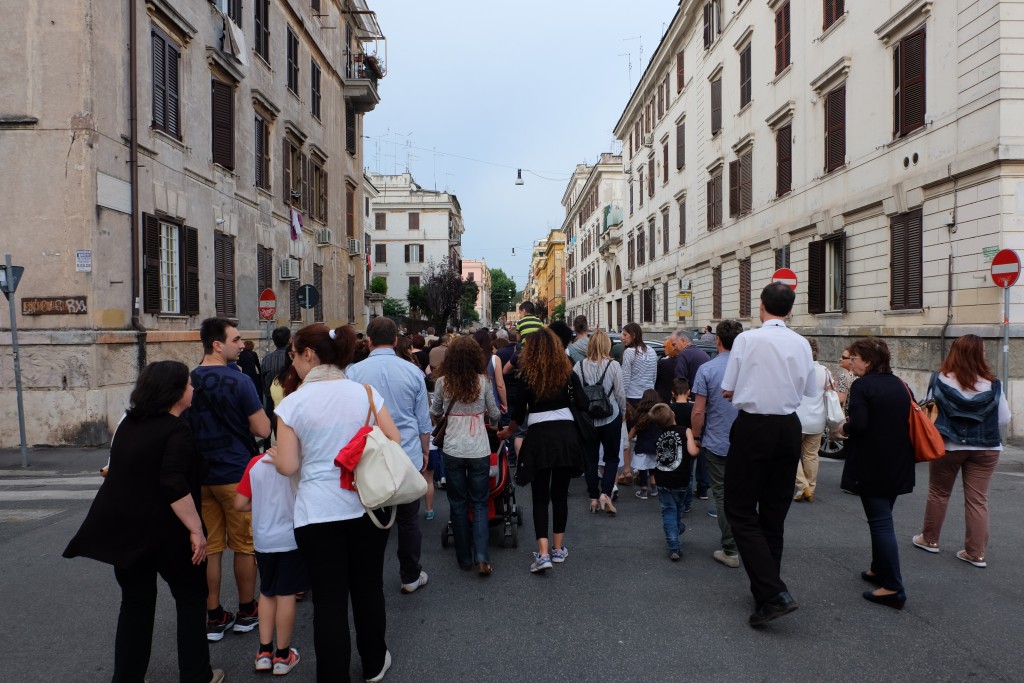 Nestled into a curve in Tiber, across from Trastevere and behind Aventino, Testaccio is a deeply Roman neighborhood. Much of city’s most famous meat dishes hail from Testaccio, which was once home to the largest slaughterhouse in Europe. Now the Ex-Mattatoio (slaughterhouse) has been transformed into a contemporary art museum and architectural school, with an organic market and Michelin-starred restaurant re-claiming other parts of the sprawling complex. Traditionally a working-class area, Testaccio does not have the pretty Renaissance architecture of the historic center. Instead, you will find unique ‘case popolare,’ public housing built around 1900, and a bustling market that draws foodies from around the world. Stay for dinner to sample real Cucina Romana, and cruise by Monte de Cocci – a hill made entirely of broken terracotta pottery from ancient Roman times.

Incredibly charming cobblestone streets await in the Roman neighborhood of Trastevere. Pronounced Tras-teh-veh-rey, the name literally means “on the other side of the Tiber.” Cross the river at Ponte Sisto from the Campo de’ Fiori area to arrive in the heart of the neighborhood.  Trastevere is well a known part of Rome for drinks in the evening, but it is also the perfect place for an afternoon stroll and a quiet coffee.  It is very easy to become turned around on the narrow lanes, but becoming lost in this part of Rome is part of the fun. Good dining options (and picturesque outdoor tables) make this dynamic neighborhood a popular stop. This is one of the best areas to base yourself in, and here is exactly where to stay in Trastevere.

No metro link. Take Bus H from Termini, or walk from the centro storico.

San Giovanni is one of the areas of Rome that still feels untouched by tourism. Sitting just outside the centro storico and a bit beyond the Colosseum, the neighborhood is home to lifelong residents as well as a younger group of students who are drawn in by the relatively affordable prices. This may be changing as the traditional businesses are slowly replaced by trendy restaurants like Sbanco and Santa Palato.  While most of the neighborhood is humble and lacking the grandeur of some other Roman quarters, the area does boast the ornate San Giovanni in Laterano Basilica. 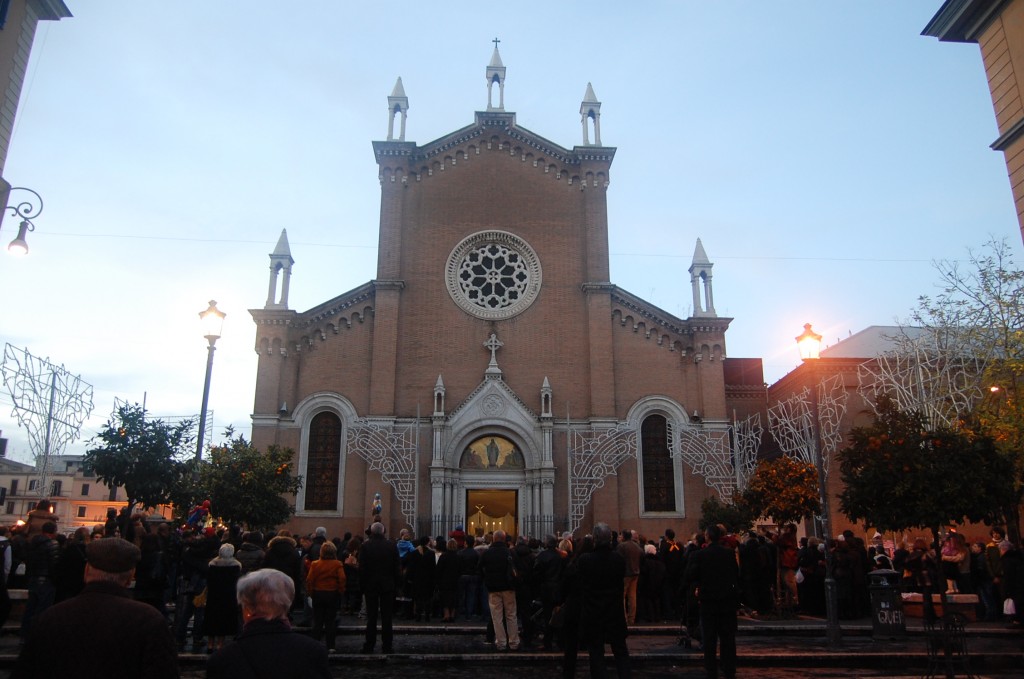 San Lorenzo owes its bohemian vibes to its vicinity to La Sapienza – the largest university in Rome. By day, the quiet area near Termini is full of little old ladies shopping and classic but unremarkable open markets. By night, the crowds streaming in and out of bars and pizza places all congregate raucously in the main piazza. A bit grungy, the neighborhood is undergoing a slow revival but is still a bit rough around the edges.

Metro Stop: Termini (Lines A and B) 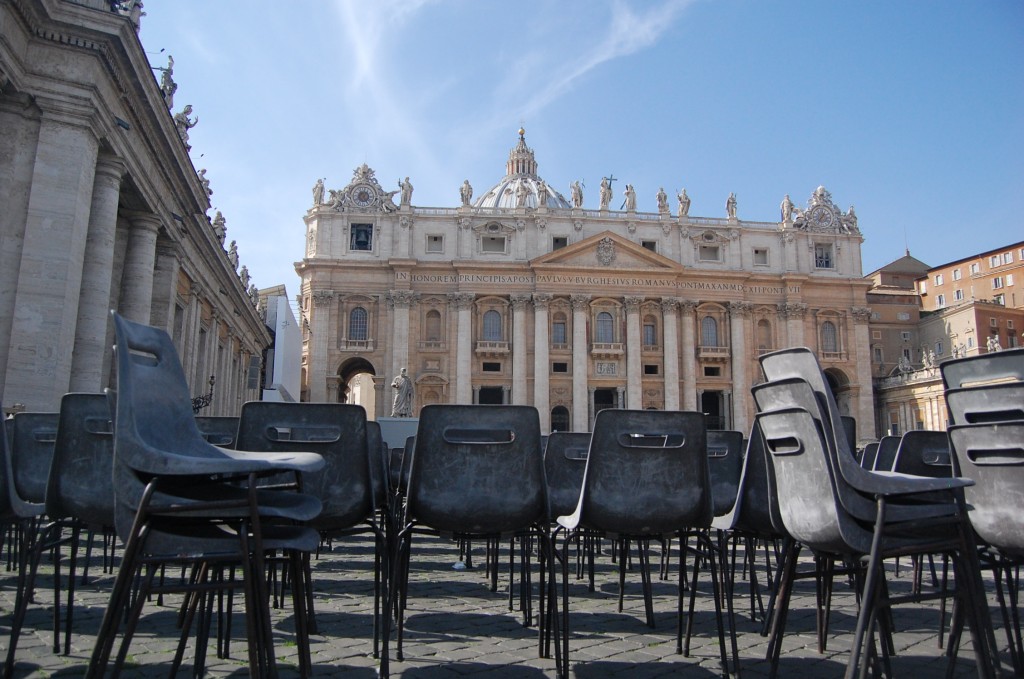 Independent since 1929, Vatican City is not technically a part of Rome (or even Italy). Don’t worry – you don’t need to pack your passport to visit. Most of the small “city” is inaccessible to visitors, but its two major attractions still draw massive crowds. For dining and drinking options, try the two bordering neighborhoods: quaint Borgo or exclusive Prati.

Looking for more? I wrote about what to do in nine enchanting Rome neighborhoods for Eater!

Are there any other Rome neighborhoods that you recommend checking out?