Artichokes may not be the first food that comes to mind when you think of Rome – after all there are mountains of cheesy carbonara and crispy pizza alla romana to work through. However, there are few vegetables more beloved in the Eternal City than the Roman artichoke.

Artichoke season in Rome begins in November when the first of the smaller violet artichokes begin to appear in the market. However, things really kick up in February when the mammole, or Romanesco (globe) artichokes, finally come into season. 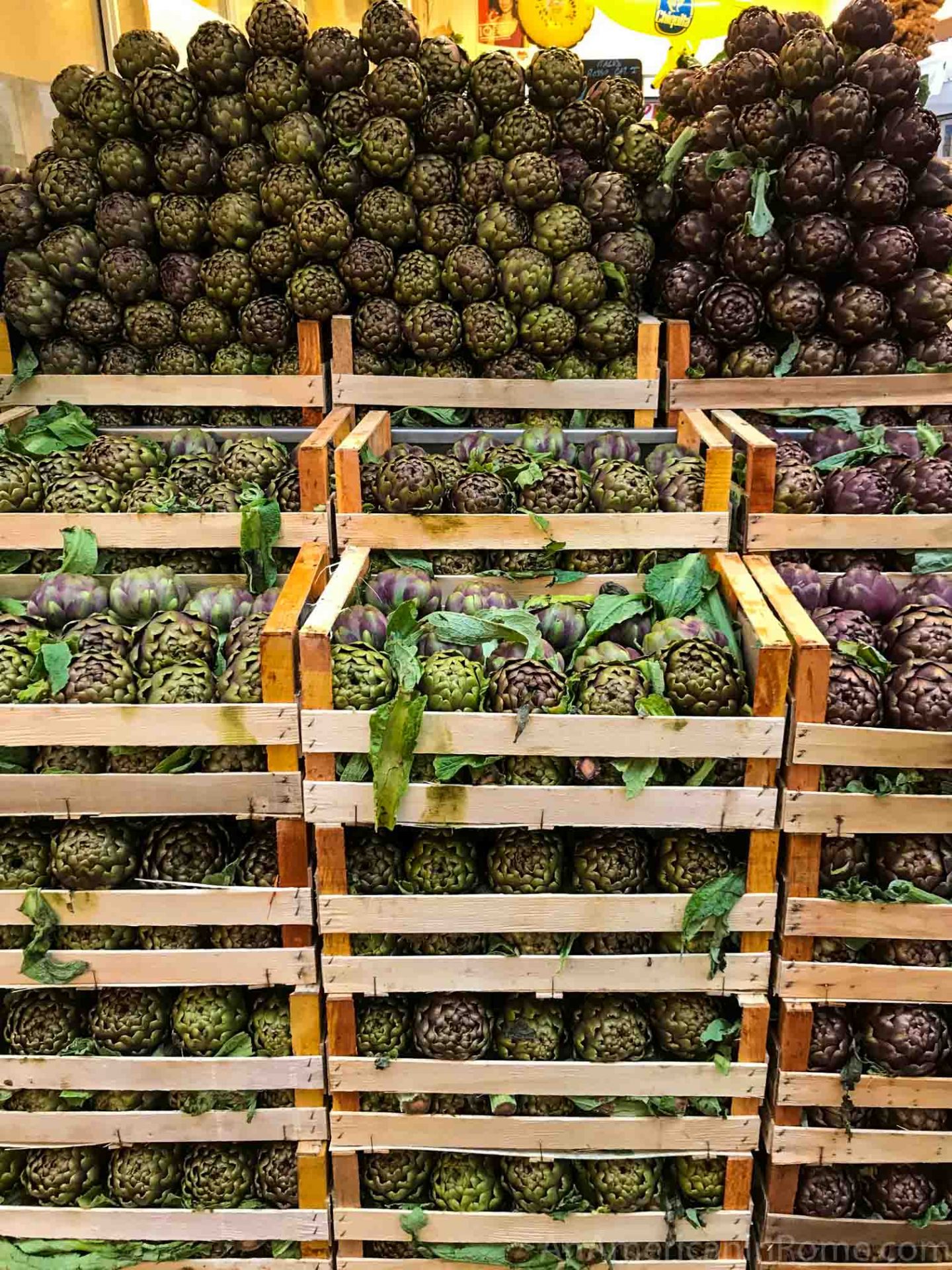 Artichokes are not technically vegetables. Rather, they are the edible flowers of a type of thistle plant. The outer leaves are not really leaves at all but instead are bracts protecting the edible (and very tasty) flower head and heart – though I will call them leaves throughout as this is the most used term. When young and tender this part of the artichoke can also be eaten so long as the tougher edges with small spines have been trimmed.

When you are shopping at markets in Italy, you can usually find artichokes whole as well as pre-trimmed to remove the tougher leaves.

Check the contorni section of the menu for artichokes because they are usually sold as vegetable side dishes rather than starters. However, you can ask that it be brought as an appetizer if you prefer. 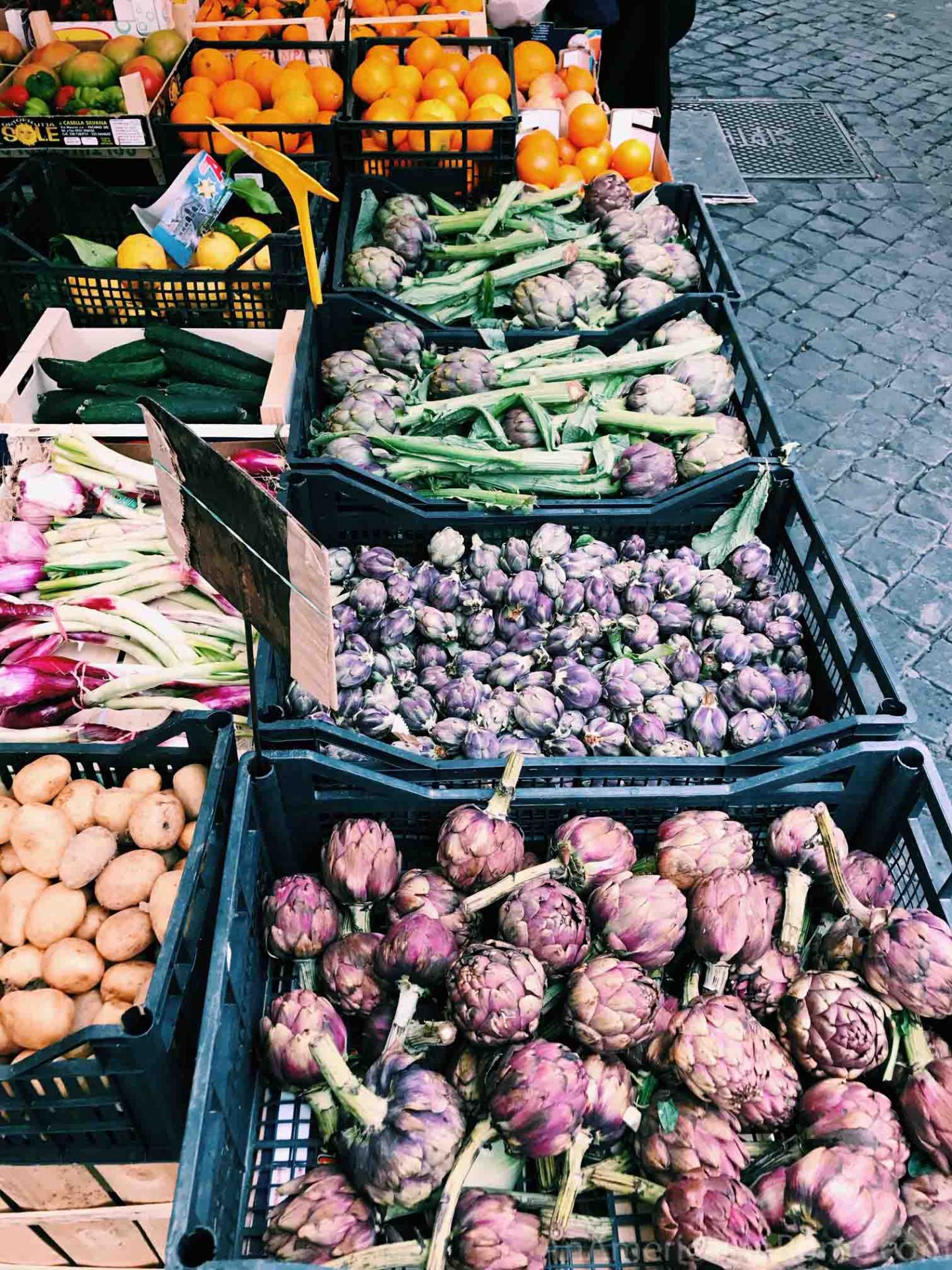 Hungry? Without further ado, here is where to find the best artichokes in Rome.

First, the artichokes need to be trimmed of the tougher outer leaves, leaving behind the more tender leaves in the shape of a rosebud around the heart. The stem is also lightly trimmed with several inches left attached to the artichoke.

It takes a bit of practice to get the hang of trimming Roman artichokes but you can also buy them pretrimmed at most market stalls for a few cents more per piece. If you want to try to do it yourself at home, you need a paring knife, a lemon to rub the artichoke with, then more cut lemon in a bowl of cold water to drop the peeled artichokes into. The lemon helps to prevent the artichokes from oxidizing and turning brown. 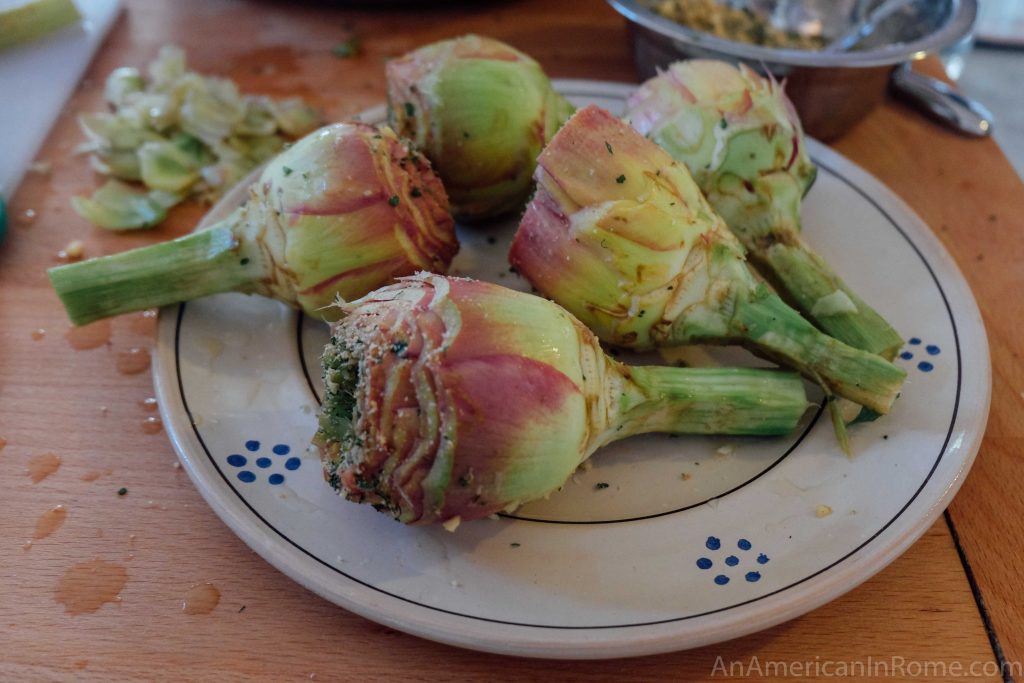 The artichokes are then stuffed with chopped wild mint and garlic and placed into a little over an inch of liquid. This cooking liquid is usually a combination of water, white wine and a bit of olive oil, in a thick bottomed pan.

Roman artichokes are slowly simmered this way, with the stems sticking straight up, for at least an hour.

The carciofi alla romana lose their fresh spring green and violet colors as they cook, turning gray-green and becoming almost velvety. Expect them to be served warm or room temperature. 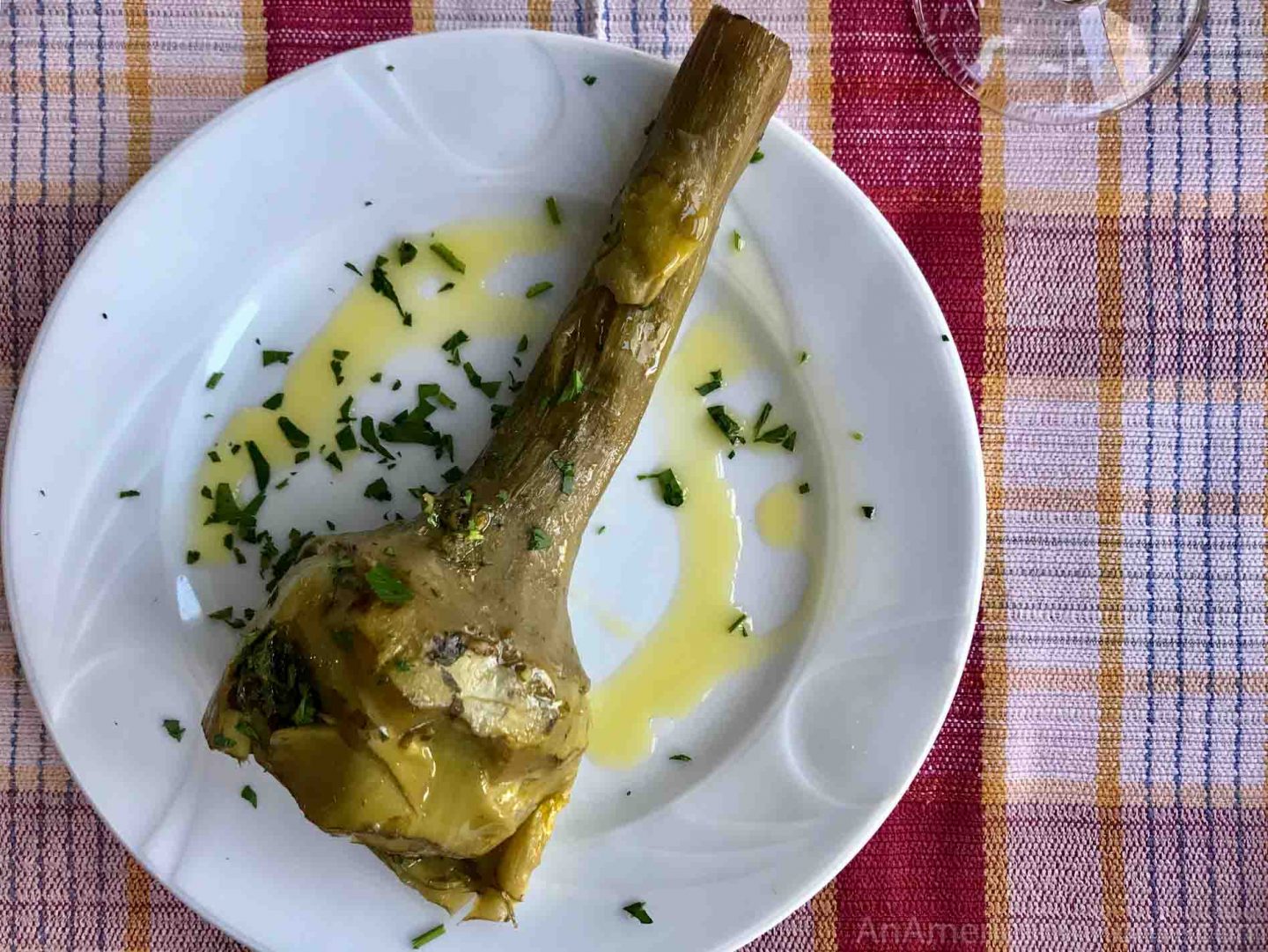 There are many places to eat carciofi alla romana but my two favorites are in Testaccio – a hub for good food in Rome. The first is at Taverna Volpetti, which has turned into a more refined bistro instead of a tavola calda but has not forgotten how to make tasty Roman staples.

At the other end of Testaccio, Lo Scopettaro is a traditional trattoria with a deliciously silken version of carciofi alla romana on the menu during the winter and springtime.

Carciofi alla giudea are fried artichokes which form a part of the culinary legacy that originated in the Jewish Ghetto of Rome and are still a specialty of the many restaurants you will find in this unique Rome neighborhood.

There was an outcry in the community in 2018 when the Chief Rabbinate of Israel declared that carciofi alla giudea were not Kosher – citing the fear that little worms might be inside the vegetables. The Roman Jewish community replied that their perfect artichokes had such tight leaves that no insect could worm its way inside – and carciofi alla giudea remains a beloved dish throughout the city.

These are mammole artichokes which have been trimmed then banged with the blossom down to loosen the tender leaves and coax them to open slightly. The artichokes are then fried once in olive oil and left to rest.

After at least 10 minutes out of the oil, the artichokes are fried for a second time. 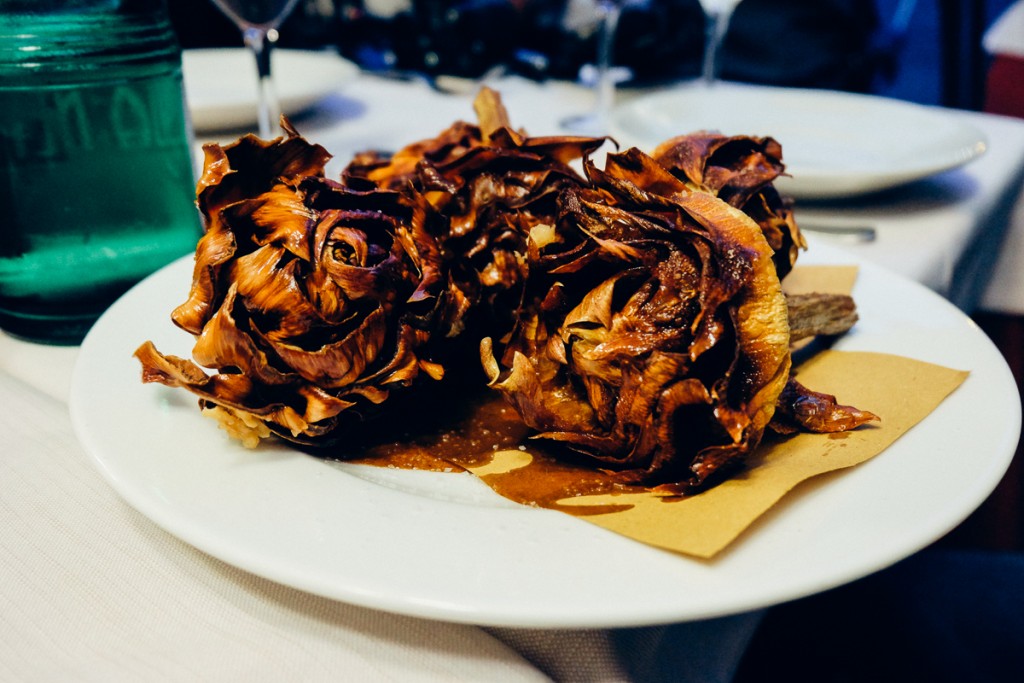 The result of this double-fried artichoke is incredible – the leaves on the outside crisp up to the consistency of chips and can be plucked off and crunched. However, the heart of the artichoke remains as velvety as ever and the resulted contrast in textures is addicting.

The fried artichokes are on the menu at almost every restaurant in Rome’s ex-ghetto and most are very good. Nonna Betta is especially famous for them, but I prefer to eat the just-fried blossoms on an April day while sitting outside next to the Portico d’Ottavia at Da Gigetto. 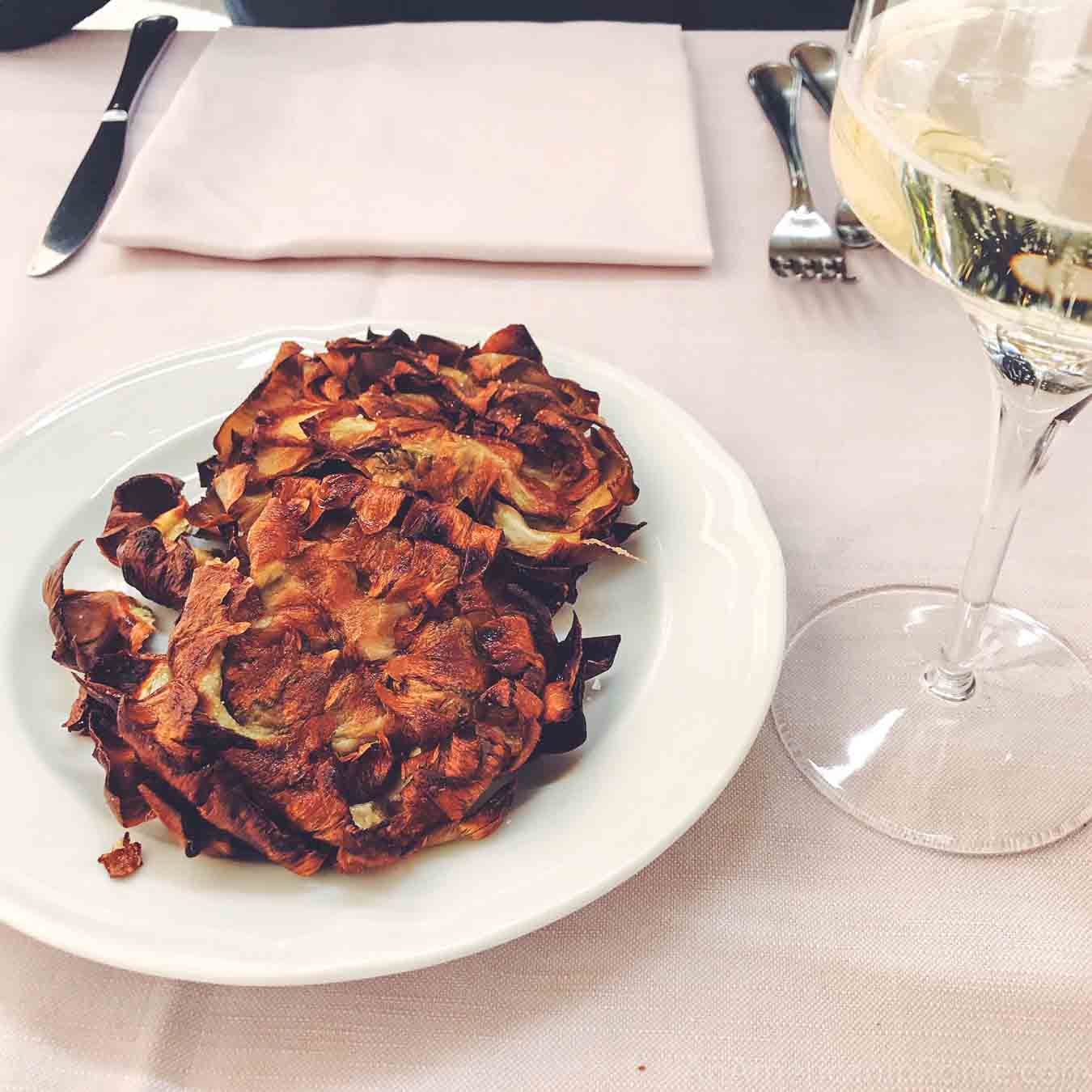 You will literally see towers of artichokes outside of these restaurants from February to May – though I don’t particularly recommend eating them after May. They will still be on the menu but they will be made with imported, out of season artichokes and the result doesn’t really come close.

The Jewish Ghetto is the best place to eat carciofi alla giudea in Rome because of the history of the dish – but one of my favorite versions of this food is actually from the street food stall Food Box at the Testaccio Market. 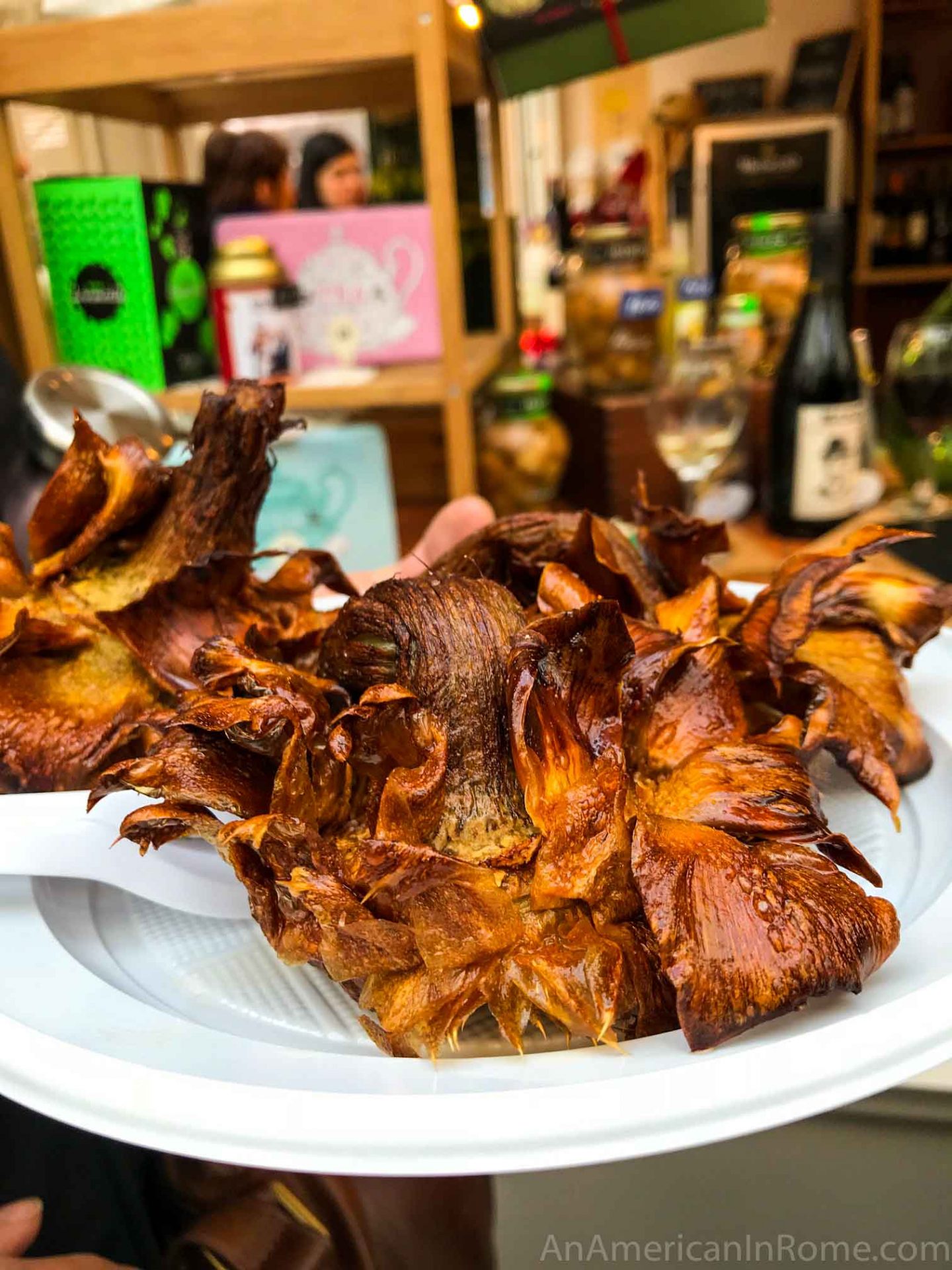 The artichokes are fried once and sit waiting for you to order – then are quickly fried again before being sprinkled with salt and handed over the counter.

This is the way to eat them: as quickly as possible, straight out of the fryer.

Other Ways to Eat Artichokes in Rome

Carciofi alla romana and alla giudea are the two traditional ways to eat artichokes in Rome. That being said, the vegetable is a favorite ingredient during winter and early spring, which means that chefs across the city adapt their own dishes to incorporate it. Once you have tried the Roman and Jewish-Roman versions, here are other ways to sample the seasonal specialty:

One of the artichoke dishes that has Rome foodie hearts aflutter this year is the grilled and marinated artichokes at recently opened Marigold Roma. The artichokes are left in an herb and vinegar marinade for at least 24 hours before being grilled in a hot pan and served atop a bed of creamy stracciatella cheese with torn pieces of toasted sourdough. Da Bucatino also does a grilled artichoke known as carciofi alla piastra – which arrives at the table smashed and still sizzling on a hot plate. 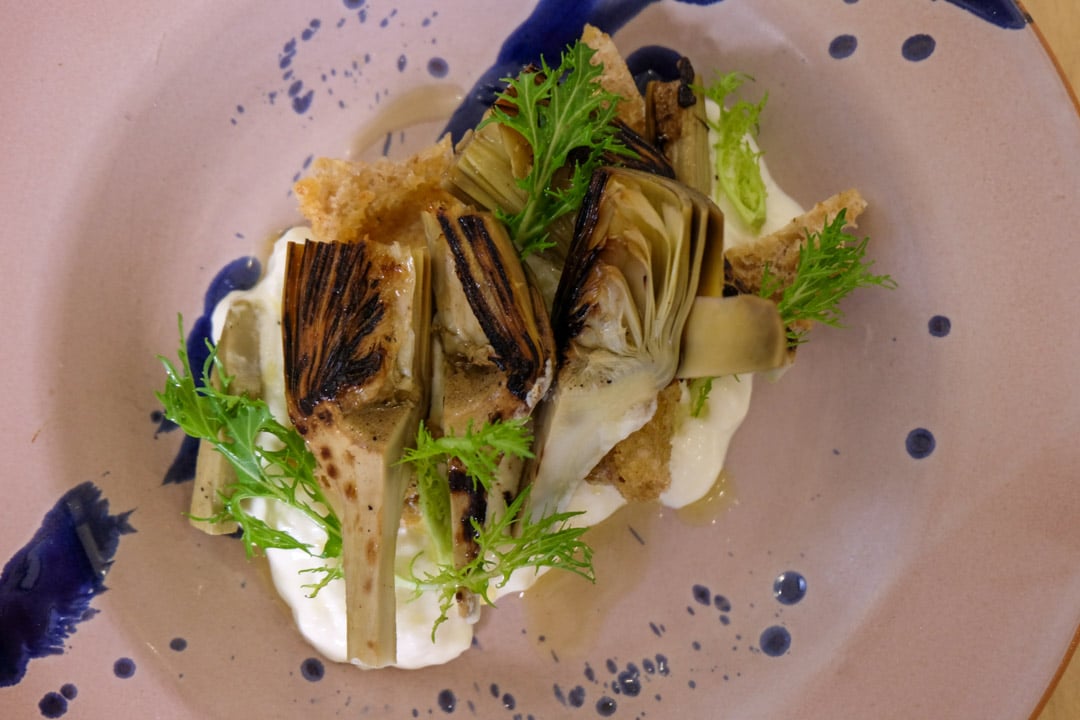 Mordi e Vai in the Testaccio Market is best known for its meaty sandwiches which makes sense considering that the friendly owner, Sergio, spent most of his career as a butcher. This is where to eat slowly simmered beef (allesso) or dig into trippa alla romana (tripe in tomato sauce), all slathered onto fresh bread.  However, Sergio’s main vegetarian sandwich option always ends up being one of my favorites: carciofi alla romana with pecorino cheese. Sergio takes the whole, simmered artichoke and smashes it into the bread by hand, being sure to add some of the liquid that the vegetable was cooked in. Then, the silky carciofi is sprinkled with flakes of aged sheep milk cheese before being handed over to be inhaled immediately.

During artichoke season in Rome, Osteria der Belli often has a plate off the menu that incorporates artichokes so be sure to ask about their daily special. The appetizer is one of my favorites in the city and features thinly sliced raw artichokes with delicate slices of calamari which has been grilled to perfection. Artichokes can be eaten raw this way when they are in peak season and deliciously tender. The combination of calamari and the thistle flower is unexpected and always leaves me wanting more. It is a dish I refuse to share and end up dreaming about for months on end. Caffe Propaganda (one of my favorite places to eat near the Colosseum) also serves an appetizer with artichokes three ways – alla giudea, alla romana, and crudo (raw). Even better? You can book a table online. 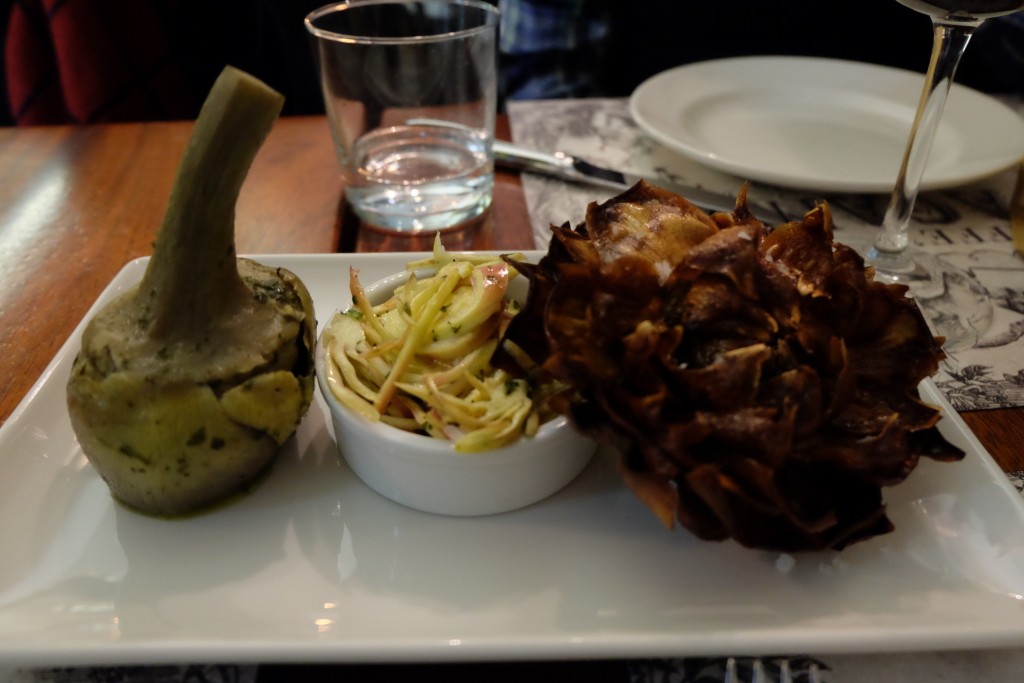 A Roman ingredient like artichoke goes best with a Roman cheese such as pecorino. You can find these two toppings melded together on top of some of the best pizza by the slice in Rome when the vegetable is in season. Most good pizza al taglio shops change the offerings daily but you can keep an eye out for artichokes to make a regular appearance (well, when they are in season) at Pizzarium as well as Casa Manco, both of which are excellent. 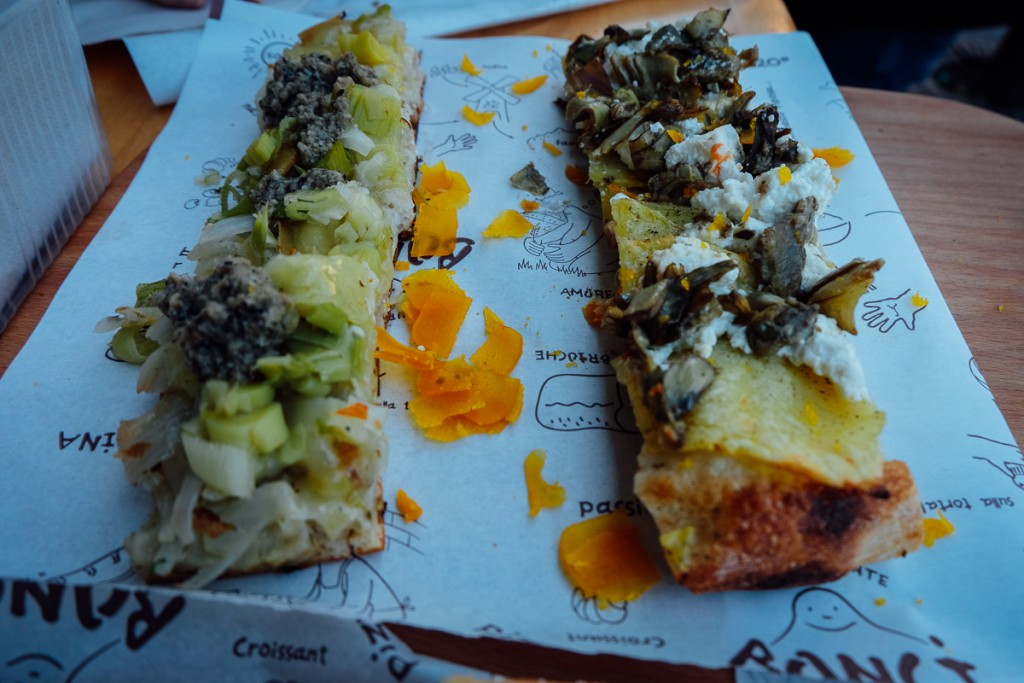 You will start to find fresh pasta shops across the city making ravioli with ricotta and artichokes during the peak season. The artichoke tends to be very subtle in these filled versions of pasta so if you want it to take center stage, go for the artichoke pasta at Al Pompiere. Ask if they have it that day because it tends to be a seasonal special that is not on the written menu. If it’s not your lucky day, the lemon fettuccine is always a good consolation prize. 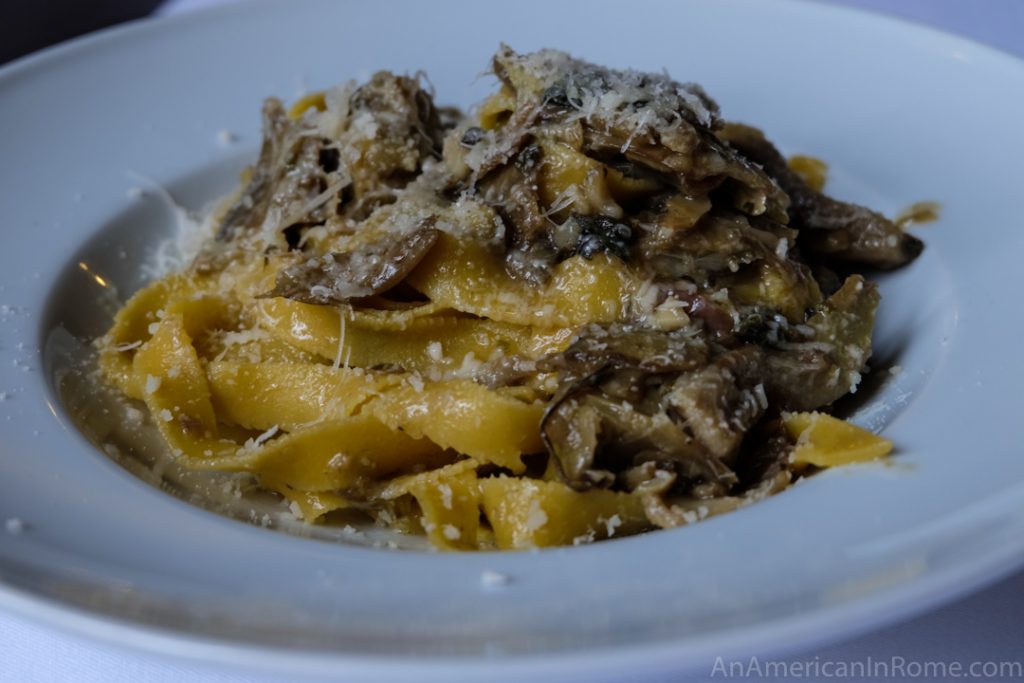 If you are lucky enough to be in Rome in April, you may find a dish called vignarola. This springtime stewed of braised vegetables is usually only available for a few weeks every year because it can only be made for the brief period of time when the last of the seasonal artichokes overlaps with the first of tender peas to arrive in spring. It is a Roman specialty that is available only when the best of these ingredients can be found – so order it if you see it! Tavernaccia da Bruno and Da Cesare both make excellent versions during the short season it is served in Rome.

Are there any other places where you love to eat artichokes in Rome? What dish do they do particularly well? I am always looking for more!

7 thoughts on “Where to Eat Artichokes in Rome”