The Colosseum has been one of Rome’s biggest attractions for nearly 2,000 years. When it first opened in 80 AD, spectators probably munched on street food snacks and enjoyed their daily bread (provided for free by the emperor) while taking in a gladiator match. But two millennia later, the free loaves of bread are gone – so where to eat near the Colosseum?

Thankfully, Rome is not yet Disneyland, so there are no eating options AT the Colosseum. However, between the monument and San Giovanni lies a small neighborhood known as Celio. Surprisingly traditional and quiet given its proximity to the Flavian Amphitheater – this is the best place to eat near the Colosseum.

Monti is another neighborhood option a bit further afield and closer to the Roman Forum. Larger than Celio, Monti has several dining options about a 15-minute walk or one metro stop away from the entrance of the monument. However, all of the restaurants listed below are a mere five minutes from the gorgeous ruined amphitheater.

Where to Eat Near the Colosseum

Pizzeria Li Rioni (sometimes called Li Rioni a SantiQuattro for the street it is found on) is a classic pizzeria a few streets away from the Colosseum. In general, pizza is a great budget dining option in Rome – making Li Rioni one of the best places for a good, cheap meal near the monument. The crispy thin pizza is the real draw here, so try to avoid being tempted by other menu items. The local pizzeria borders on kitsch, with an interior decorated to look like a street in a small Italian village, complete with laundry flapping in the wind. If possible, call ahead to book for dinner in order to request a table outside. 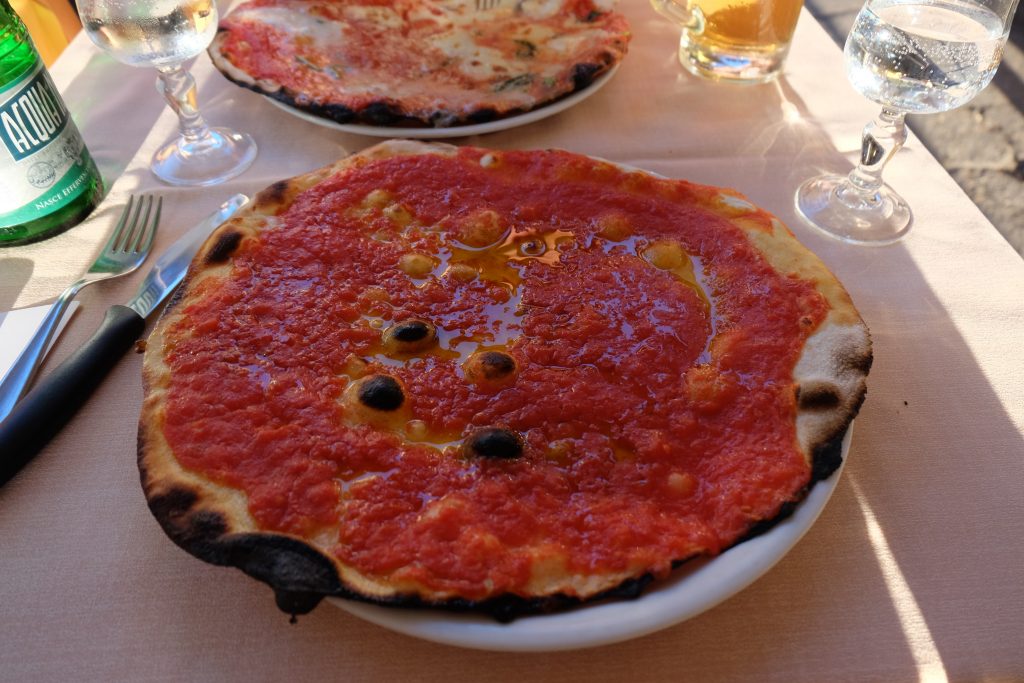 Eating near major monuments does not always have to be an expensive treat. Case in point is Trattoria Luzzi near the Colosseum. The trattoria has been serving typical Roman food a short walk from the Colosseum since 1945. Most of the pastas here average a mere €6-8 a piece, and a liter of house wine will set you back €4.  There is also a pizza menu (starting at €6), but the pizza at Li Rioni is better. At those prices, you can’t expect culinary nirvana and you should steer clear of the frozen seafood second courses – BUT Luzzi is an incredible deal in this day in age in Rome, particularly considering the enviable location. 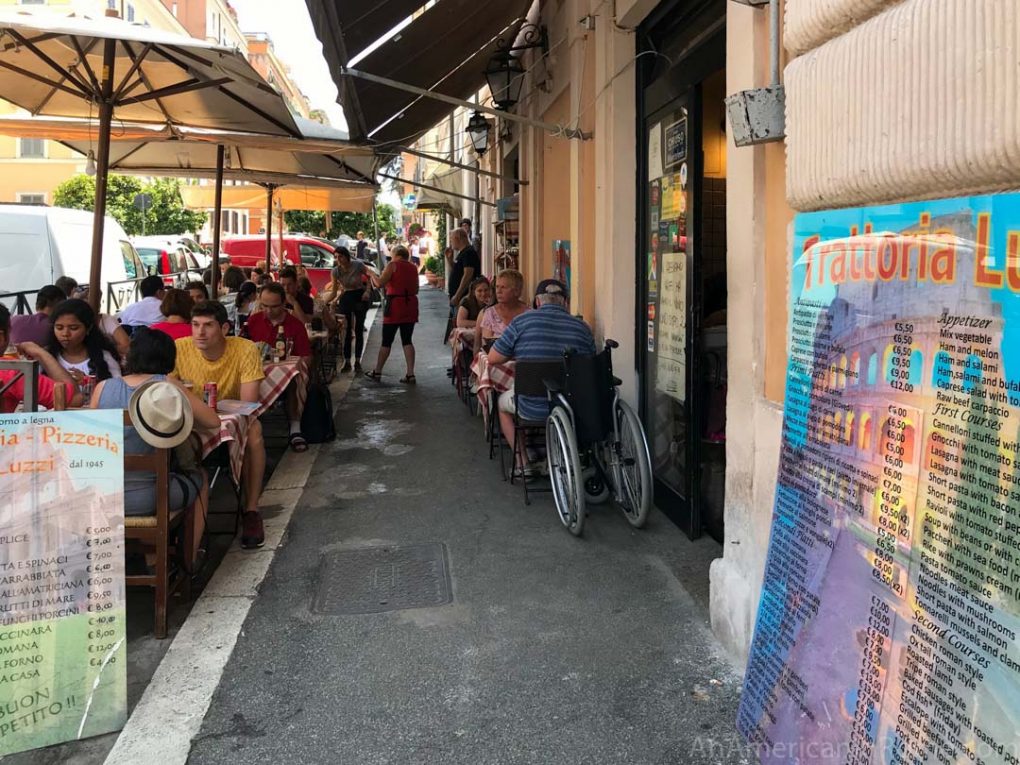 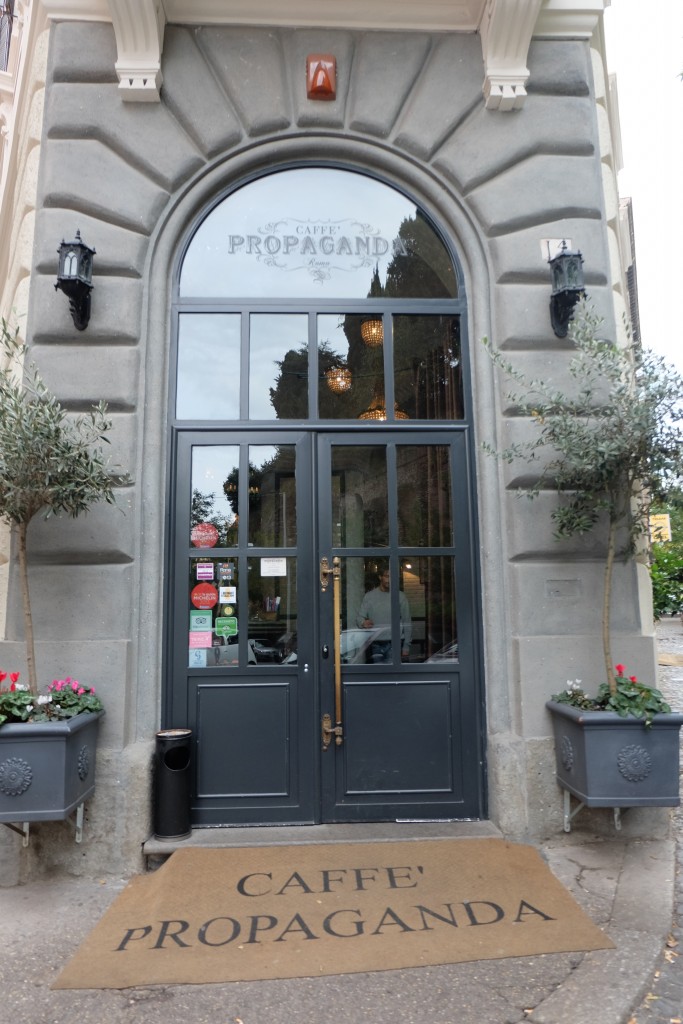 Fine Dining near the Colosseum: 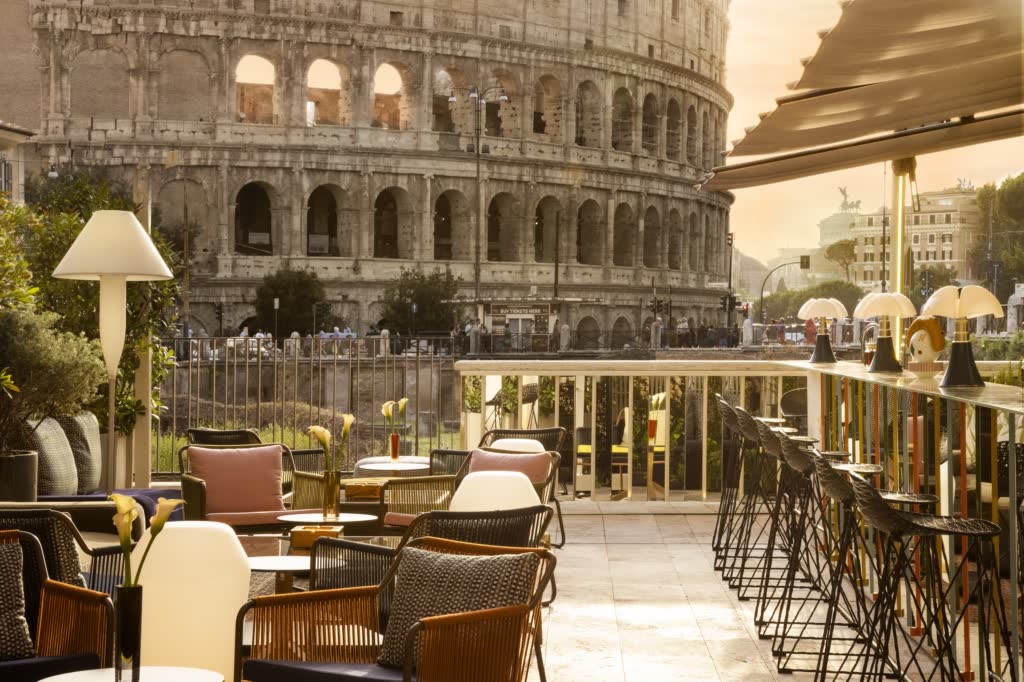 If you want to go all out for cocktails and fancy nibbles, the best place for aperitivo by the Colosseum is the swanky Court bar at the Palazzo Manfredi. The five-star hotel has one of the best views of the monument, and one of the best bartenders in the city.

There is no budget seafood dining worth trying near the Colosseum, but those looking for an exceptional fish-based meal can book a table at Tempio di Iside. Located a brief walk away from the Colosseum, the upscale seafood restaurant has its local fresh fish, lobsters, crabs and shrimp extravagantly displayed on ice at the entrance.  For the freshest and most varied sampling of the menu, start with the ever-changing appetizers, which on any given day might include fish carpaccio, oysters, and/or fried squid. The starter dishes are split between a mix of raw (for which the restaurant is best known) and cooked seafood options. The stand-out first course is one of the restaurant’s specialties: spaghetti ai ricci (pasta with sea urchin).

Located on the jaw-droppingly romantic terrace atop Palazzo Manfredi, Aroma offers fine dining with once-in-a-lifetime views of the Colosseum. The ancient amphitheater dominates the view from the open dining room, with the twinkling lights of the Forum vying for attention as well. Chef Di Iorio’s refined Italian cuisine stands up to the amazing vista and has earned a Michelin star for its local, seasonal approach to fine dining. Feast on handmade pasta with king prawns, Pachino tomato confit and almond pesto, or propose a toast over oil and lemon marinated fish with Mediterranean couscous. And the exact aroma that gives the restaurant its name? It is actually a play on ‘Roma,’ but also a nod to the fact that all the herbs used in every dish are grown directly on the open-air terrace.

Where to Drink Near the Colosseum:

With Motown on the speaker system, low lighting and a great selection of wines, Wine Concept is a gem of a wine bar within a short walk from the Colosseum. There are hundreds of bottles to chose from, as well as a daily selection of wines by the glass that always includes 4-5 labels apiece of sparkling, red and whites. There is also a small menu of nibbles and a daily food special, but the bar is best for drinks rather full meals. 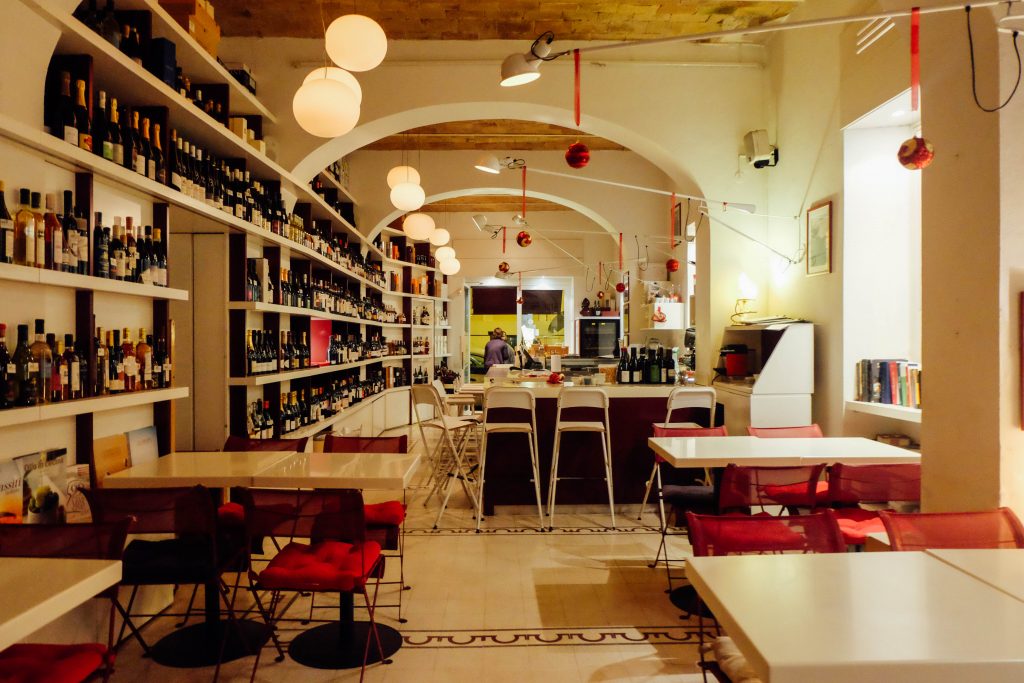 BrewDog is the Roman outpost of a popular Scottish craft beer company and could hardly have hoped for a better location in the Eternal City. The bar sits between the Colosseum and Monti, with an impressive view of the monument from the front door (but sadly not from inside). In addition to tasty brews, the bar serves a light menu of sandwiches, burgers and salads. It is a great place to recover with a pint after sightseeing. 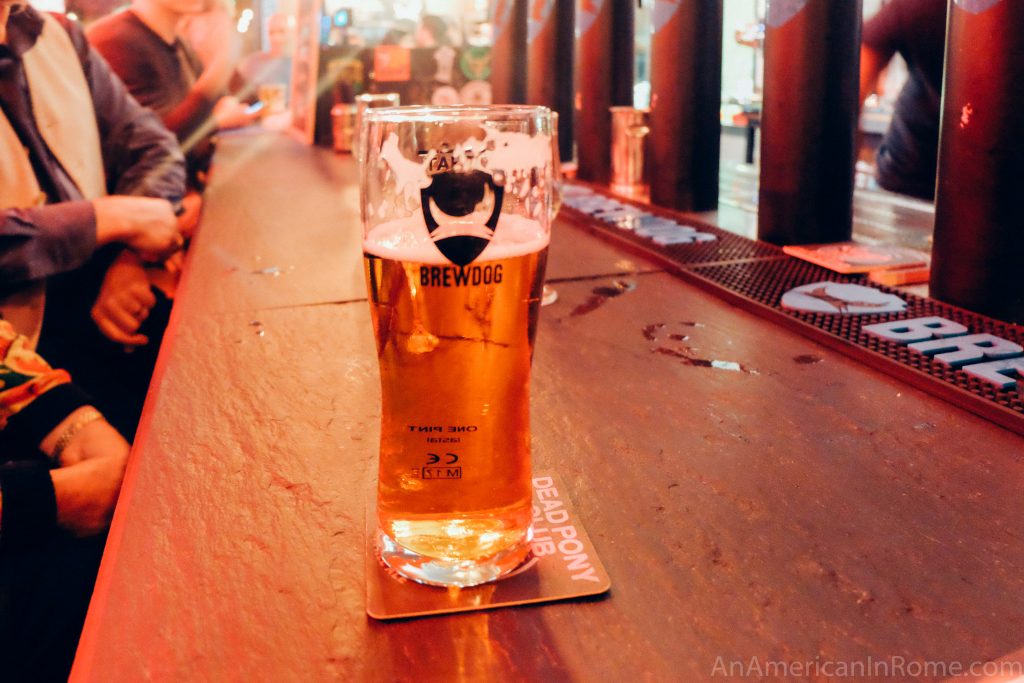 With the exception of Li Rioni, which only opens from 7 pm, all of the restaurants and bars listed above serve both lunch and dinner.

Is there anywhere else where you like to eat near the Colosseum? 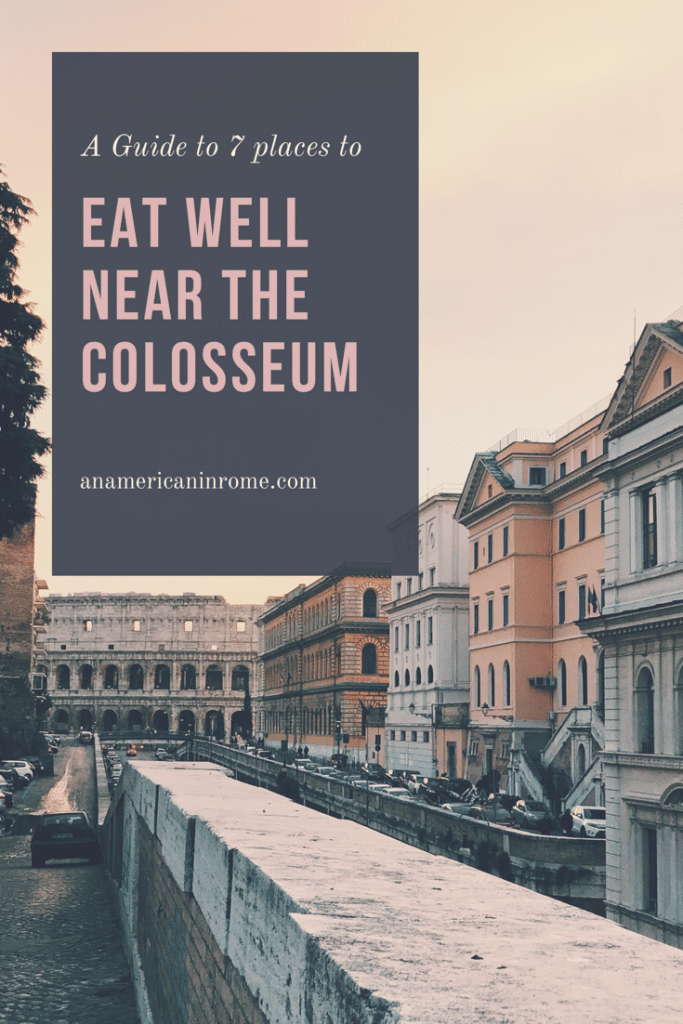 6 thoughts on “Where to Eat Near the Colosseum”