Most people think of Rome and imagine the empty ruins of the Forum or the aerial grandeur of St. Peter’s Basilica, but Rome is also filled with the sounds of screeching trams, car honks, and a never-ending stream of ambulances. If you want to get away from it all, you can retreat to an agriturismo in the Italian countryside. 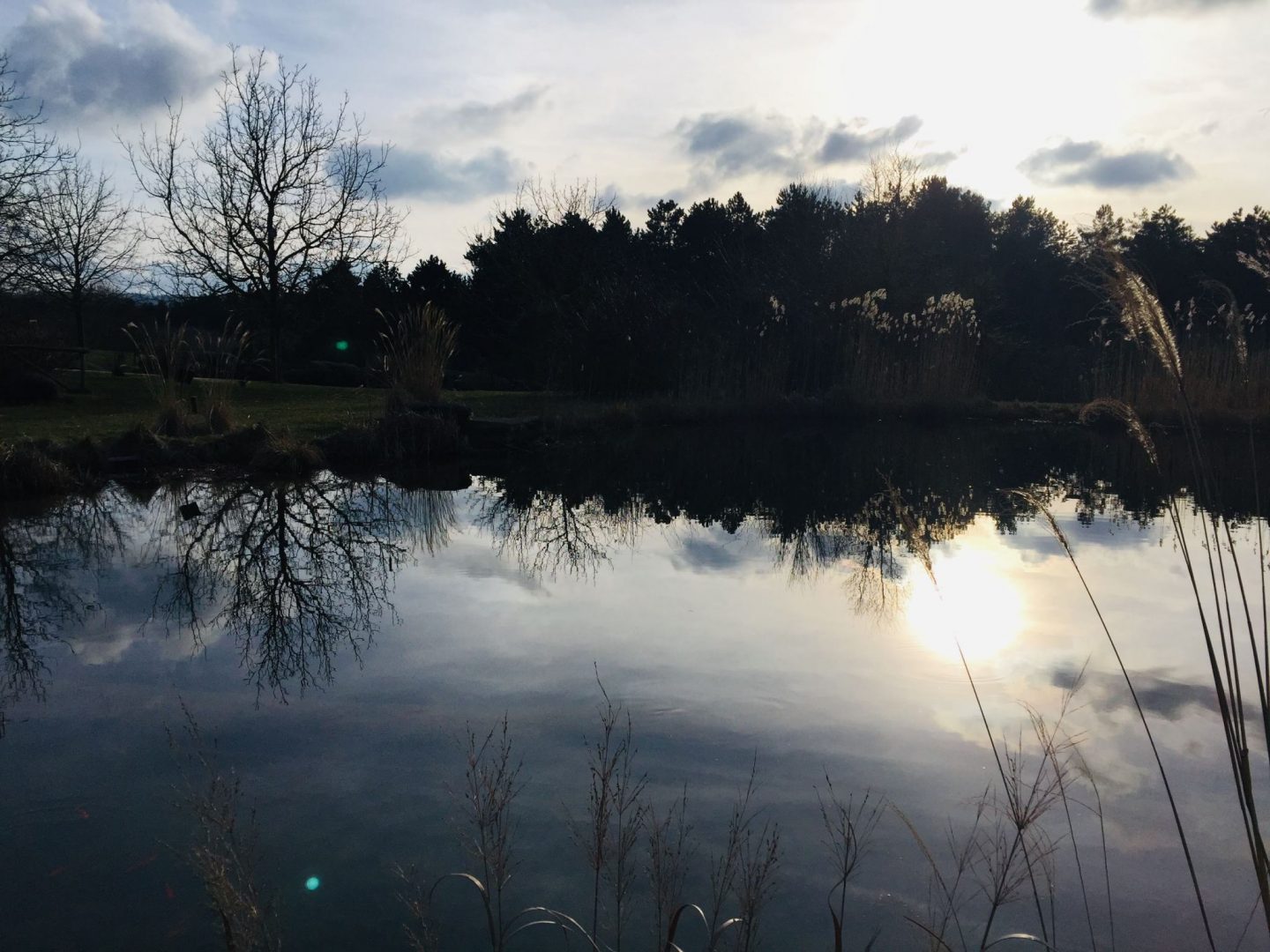 Agriturismi are farms with accommodations for guests, and these countryside vacations started in Italy around 1970 as a way to bring city dwellers into the nearby nature. Every agriturismo is unique, so you might get to help with a harvest, take a cooking class, or watch how cheese is made.

Want to experience one for yourself? Then look no further than the beautiful Parco dei Cimini, an agriturismo near Viterbo, just 50 minutes outside of Rome.

Today we’re having lunch with the chef Claudia Venditi. 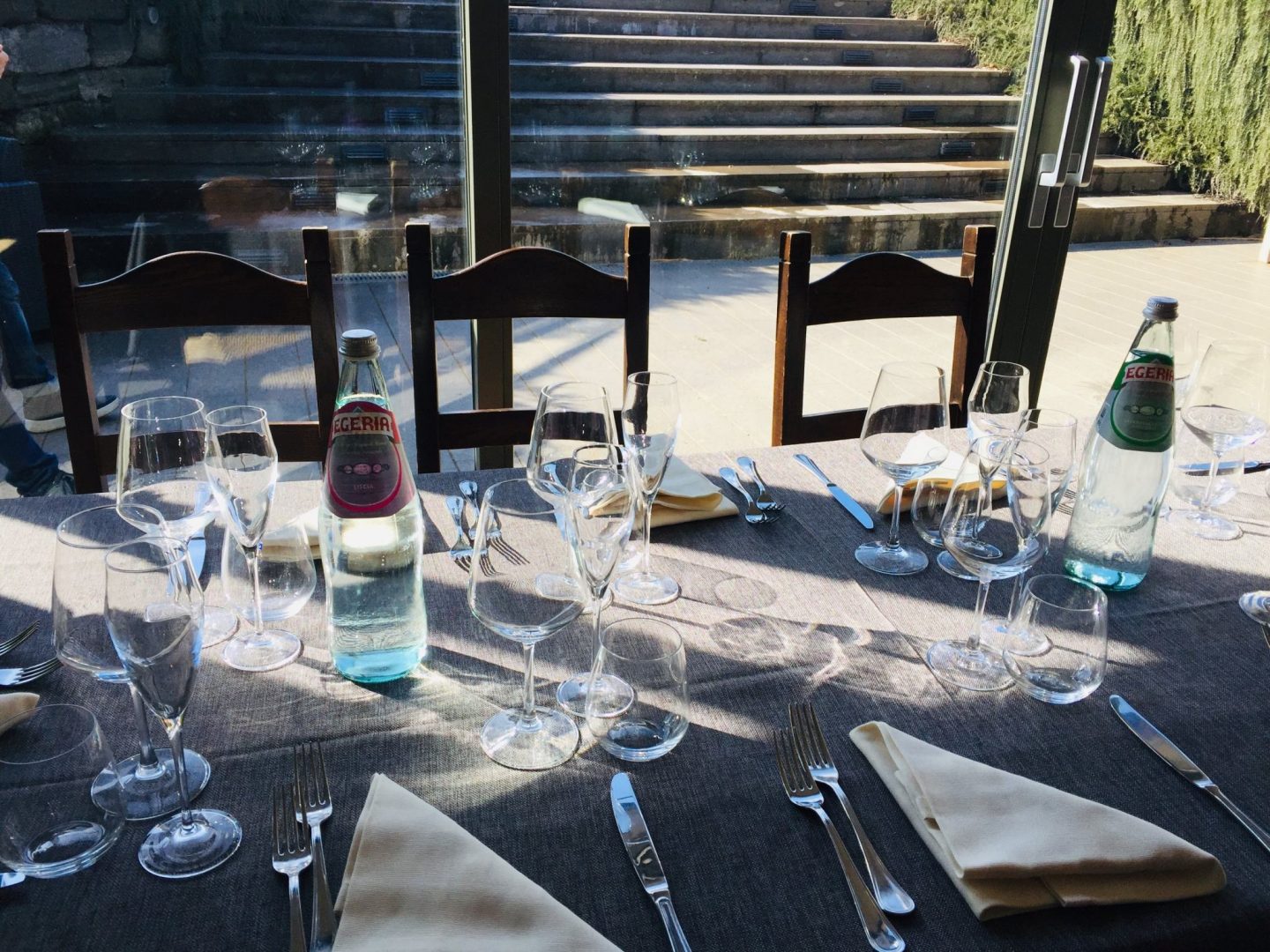 Actually, Claudia is both a professional chef and a classical ballerina. In her introduction, she tells us that she believes cooking and dance are both forms of high art because both are performances for an audience: chefs and dancers alike need to understand pacing and how to leave an impact.

For today, she’s showcasing local products from the Lazio region, like olive oil, sheep cheese, and black truffle. Given her philosophy, no wonder our lunch is so delicious! 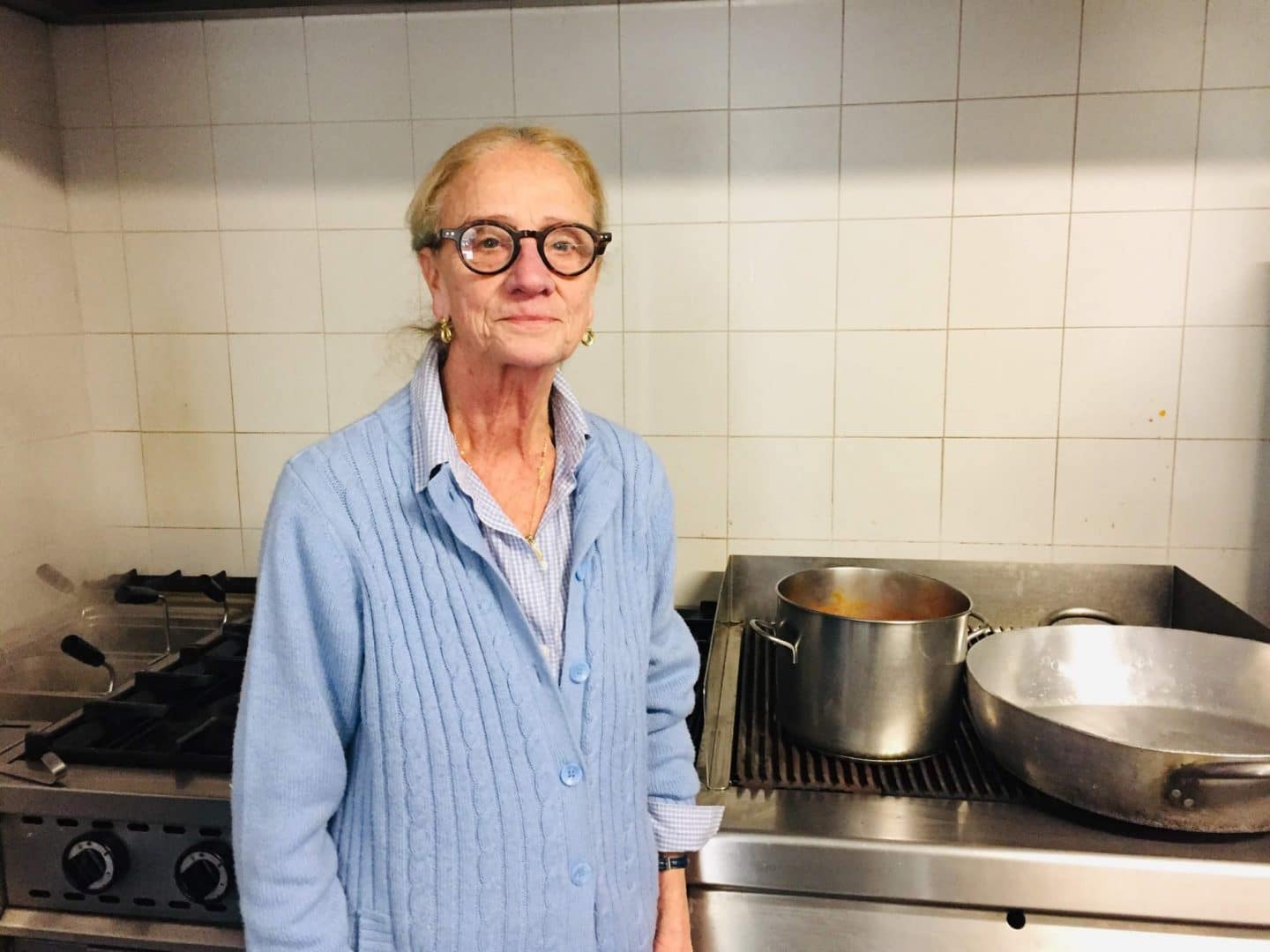 Let’s dig in, course by course.

We begin with bell’helene, a pasta dish created by Claudia. I’m surprised that we didn’t start with an Italian antipasto but the pasta’s flavor was light enough for a first dish. Hey, never say no to starting off with truffles! 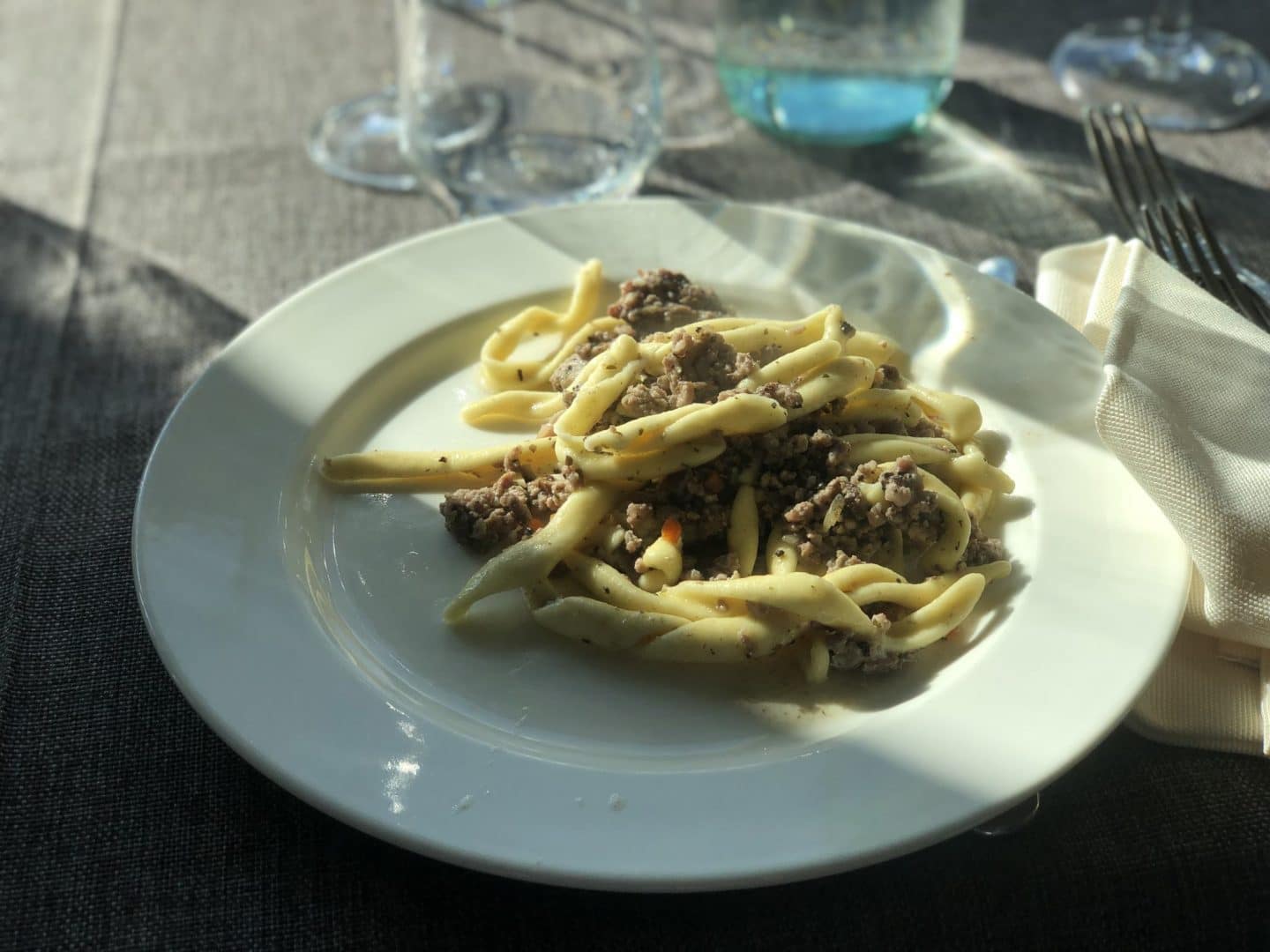 The dish was made with ingredients grown in the Lazio-Umbria region where the agriturismo is located, hence the black truffle instead of white ones from the south. This pasta is called casarecce (which comes from casareccio, meaning homemade), and the dish starts with a typical Italian soffrito: a sauté of aromatics like celery, carrots, and onions. Then beef, veal, and sausage were added, along with truffle sauce and truffle oil. Just before serving, Claudia brought out whole truffles for everyone to see and then shaved a generous amount over the pasta. 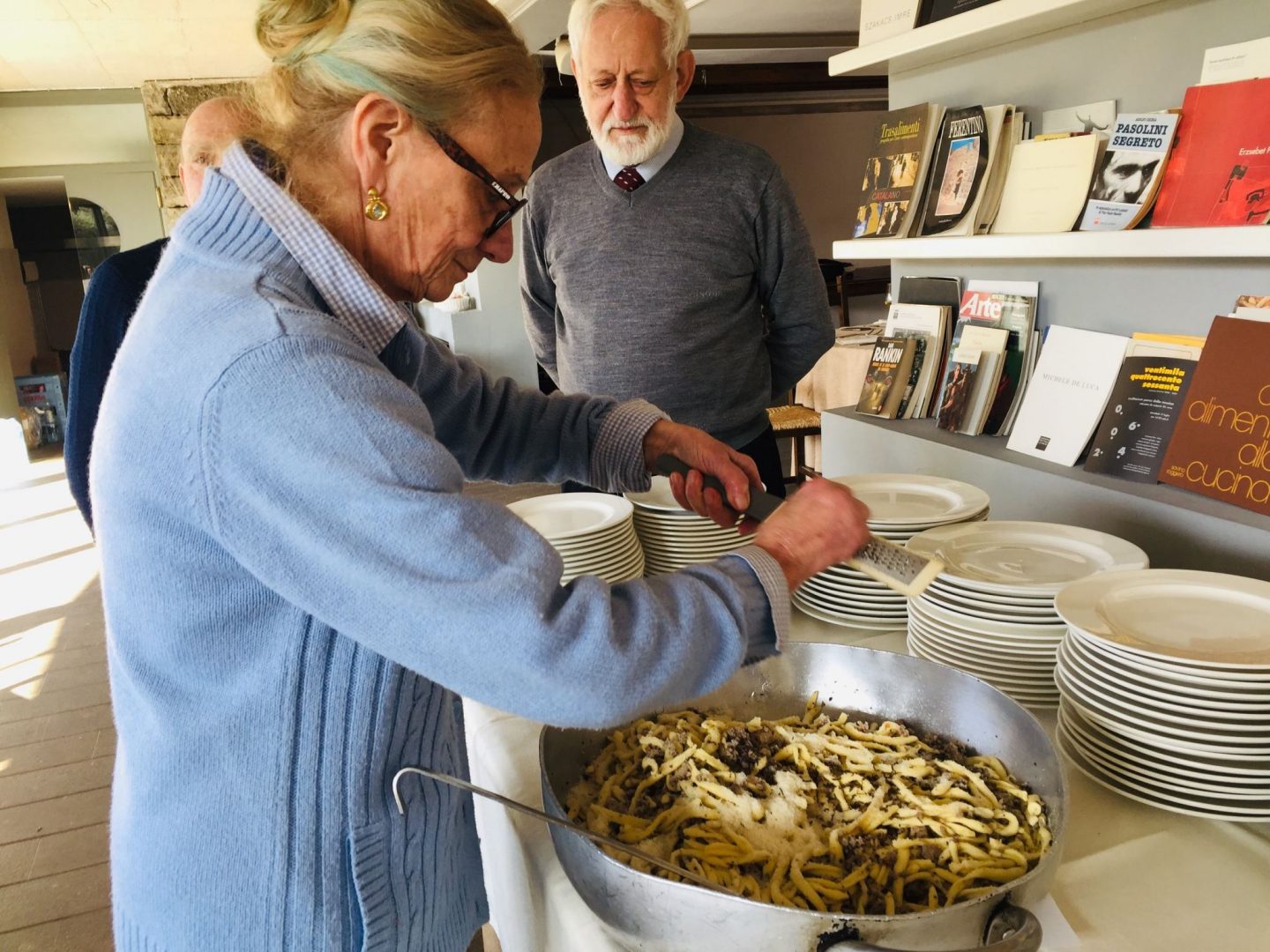 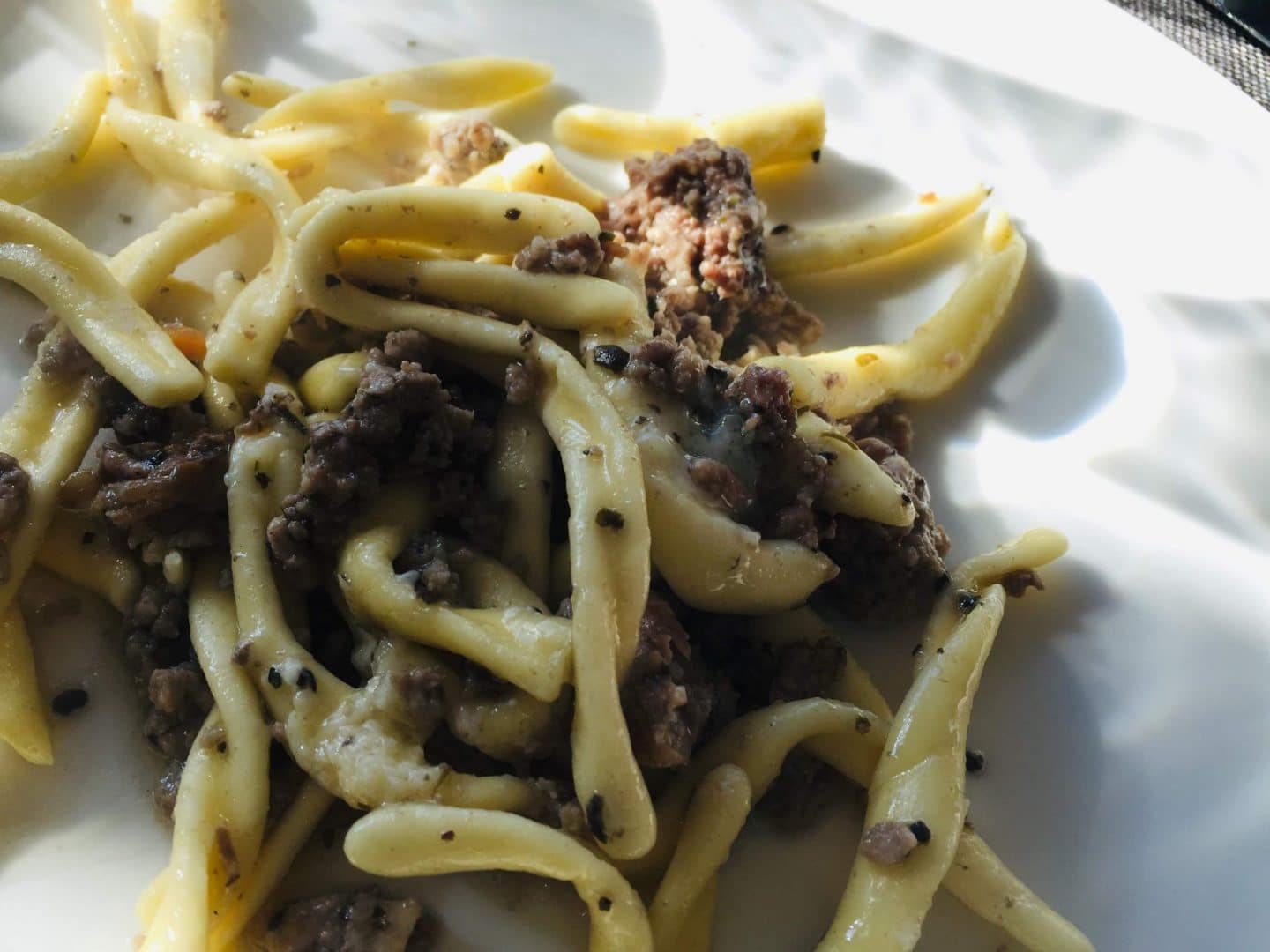 Claudia even shared her secret for creating a creamy sauce: adding a tad of pasta water into the pan! The starch released into the water as the pasta cooks makes everything thicker.

Next up is a standard Roman pasta dish: rigatoni all’amatriciana. Amatriciana is a tomato-based sauce with guanciale (cured pork cheek) and pecorino romano, the local sheep milk cheese you’ll find everywhere in Rome and the surrounding countryside. 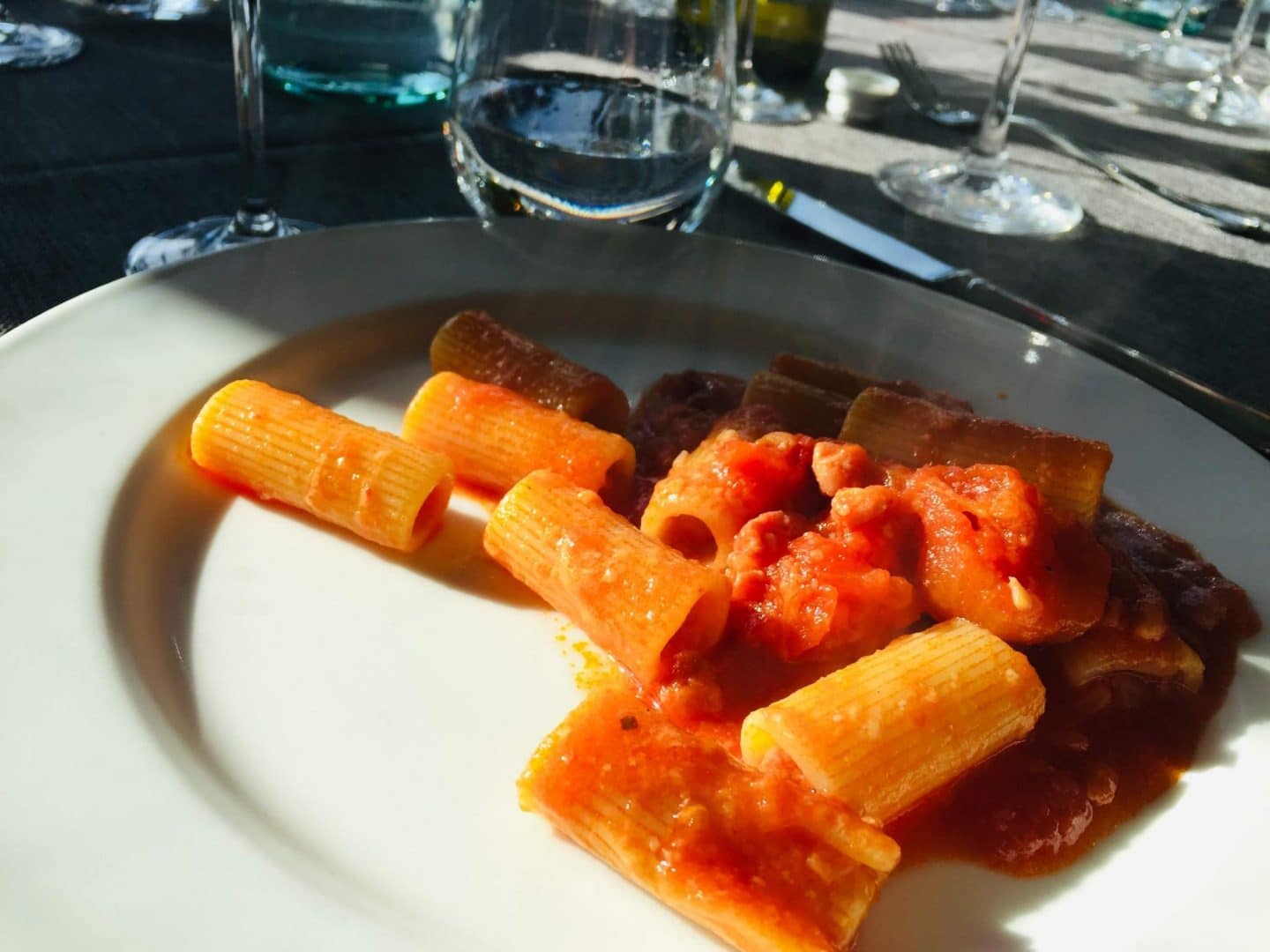 Claudia switched things up by using a 2:1 ratio of guanciale to pancetta (a different kind of bacon made from cured pork belly), and adding white wine plus chili peppers into the mix. The result is a bright red sauce with a full-bodied flavor from the meats, and a slight kick from the red pepperflakes.

Claudia used a straight, rigatoni rigata for the dish because the ridges on the pasta hold the runny sauce well, but you can also find rigatoni in curved and non-ridged forms (known as rigatoni liscia). No matter which you choose, make you sure cook the pasta to just al dente, and not too soft!

Our third course is roasted chicken with potatoes and chicory. Cacciatore means hunter, and ingredients for pollo alla cacciatora can vary widely across regions in Italy. Claudia’s included white wine and vinegar, but other versions may contain tomatoes. What unites these chicken dishes, however, are the fundamental spices of garlic and rosemary.

Before roasting the chicken, Claudia first sautéed the chicken with the aforementioned soffrito. Just before serving, she added a dash of vinegar. The potatoes were al forno (baked), and are delightfully chewy. Imagine potatoes al dente! 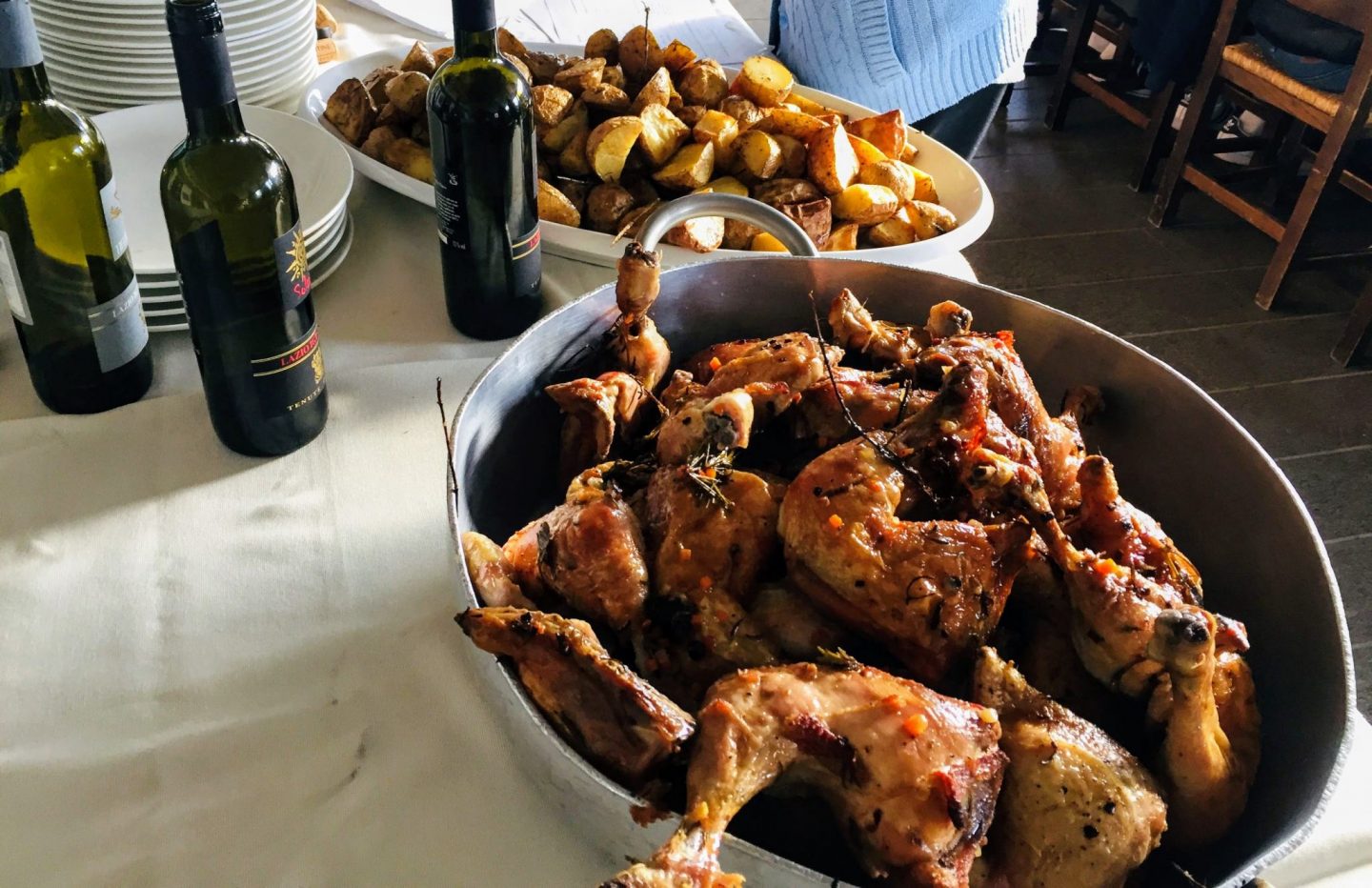 On the side, literally, was the chicory or cicoria.

Side dishes in Italy are placed on the left, so that diners can eat it with the fork in their left hand–unlike Americans, Italians do not put down their knives and switch off with their forks. It is also not common to serve the side dishes on the same plate as the main course. 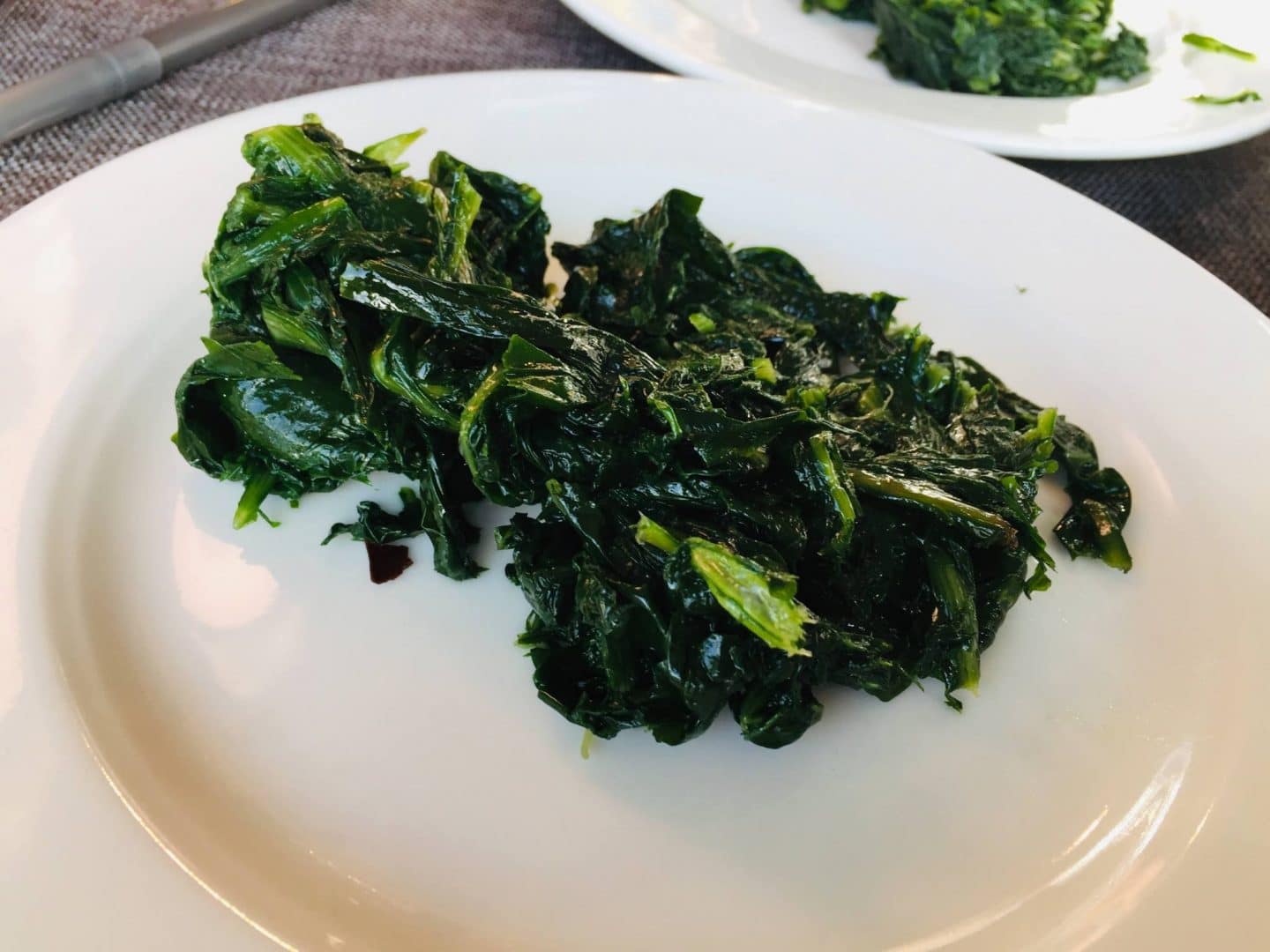 The cicoria was sautéed with garlic, chili, pepper, and olive oil.

Chicory was traditionally a country food because it grew in the wild, but today it is cultivated as well. It’s a bitter green, so this dish was probably the least popular one amongst our group. Personally, I enjoyed the strong flavor of bitterness and garlic.

Finally, because Carnevale is coming up on March 5th, we ended with a massive spread of Carnevale sweets. 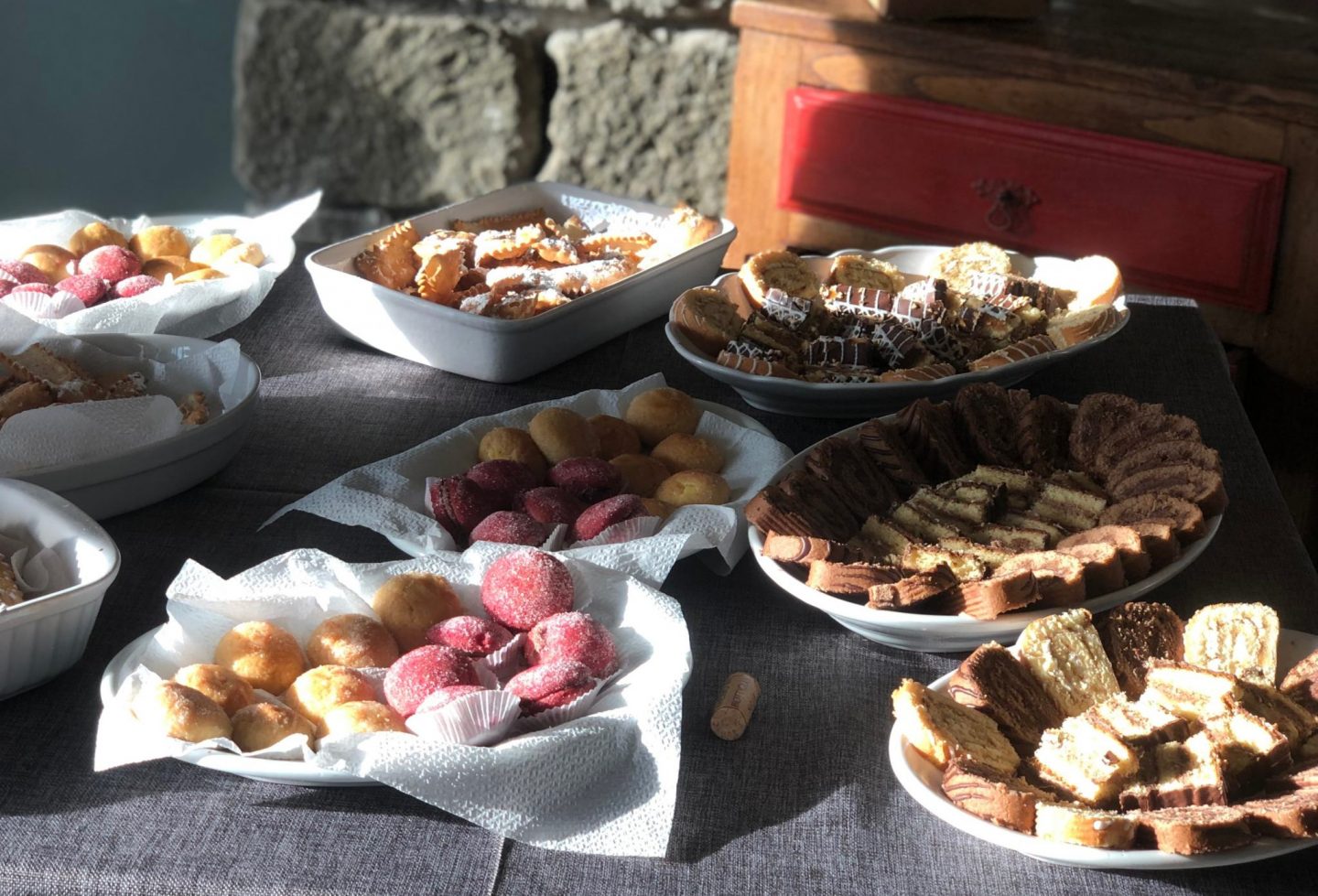 Carnevale is a festival season ending in Mardi Gras, with Lent (traditionally a period of repentance and reflection for Catholics) following immediately after. Therefore, many Carnevale desserts are fried to use up extra oil and lard before the time of self-denial begins.

In Rome around February and March, you can find Carnevale snacks in traditional neighborhood markets, bakeries, and cafes. Would you like a frappe, crispy long sheets of fried dough? 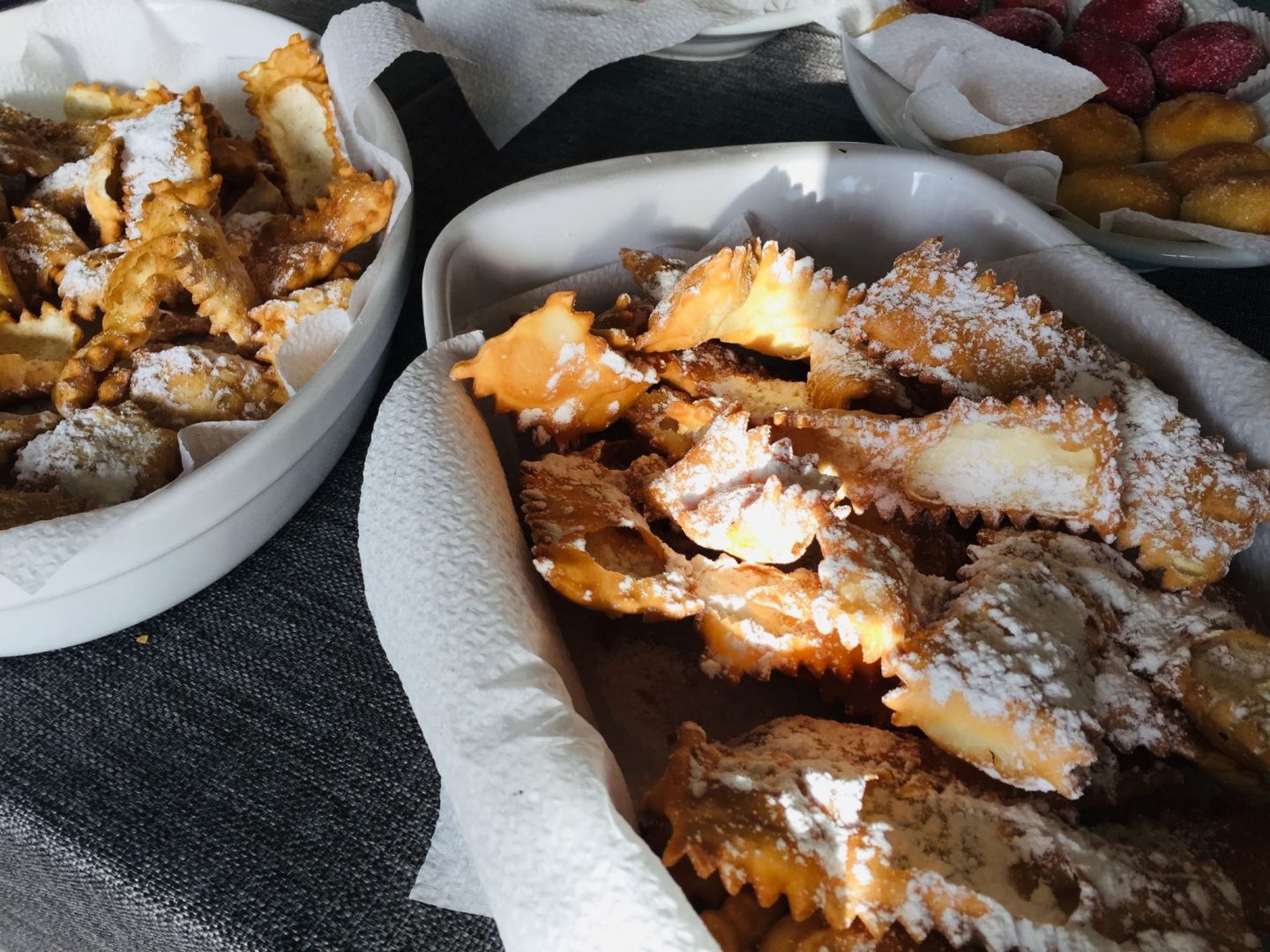 Or maybe you’d prefer a soft, fluffy krapfen made with rum? 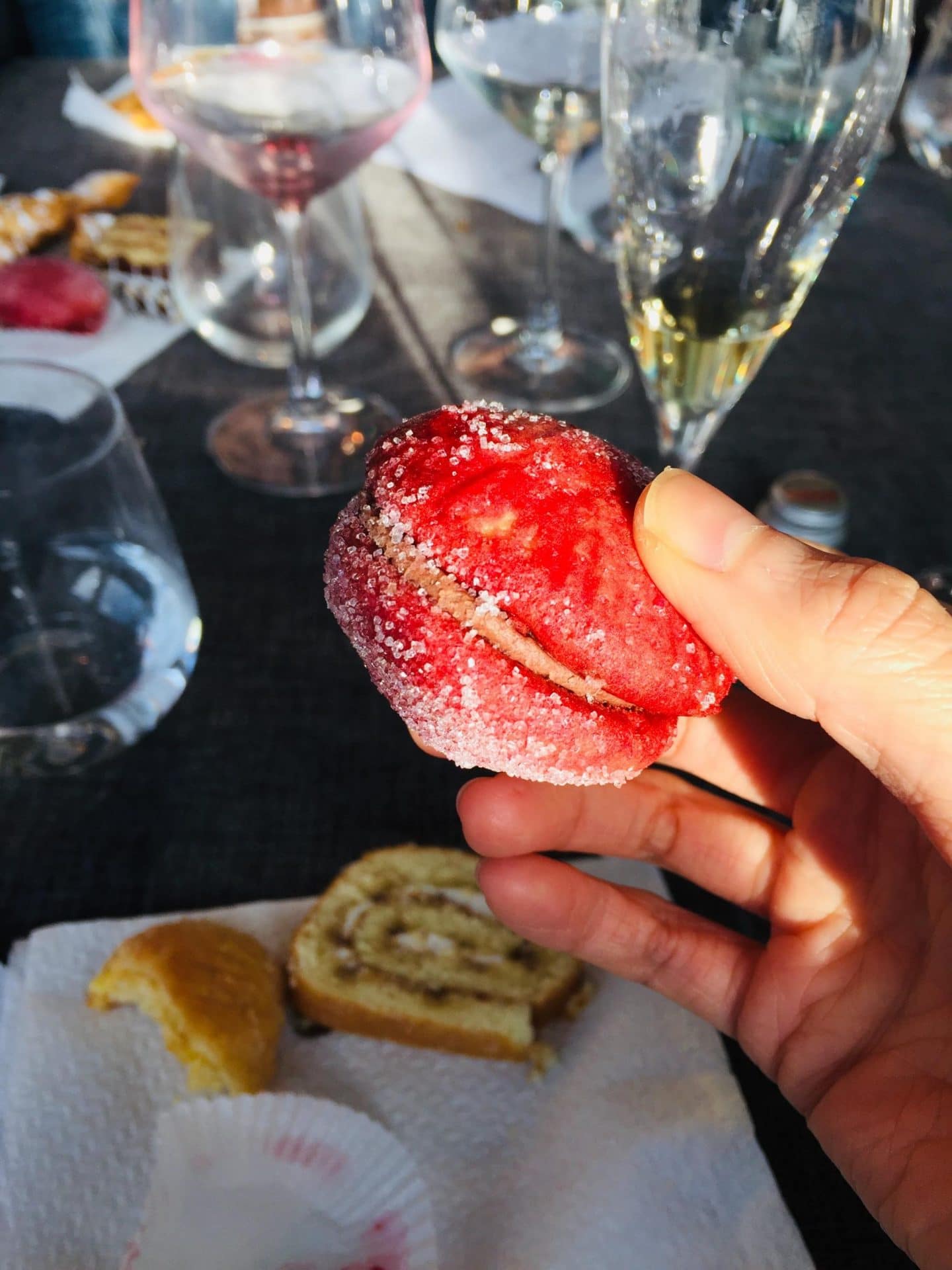 To try Claudia’s cooking for yourself, or visit Parco dei Cimini for a relaxing stay, you can visit their website. They also host special events, and if you’re lucky you might get to see Claudia in a ballet performance!