Mercato Trionfale first opened outside of Vatican City and on the edge of Rome in the late 1800s. This makes it one of the oldest neighborhood markets (mercati rionali) in the city.

As the Prati neighborhood grew, the market moved to Via Andrea Doria in the 1930s. The stalls received permits to set up and sell along the sides of the wide street. 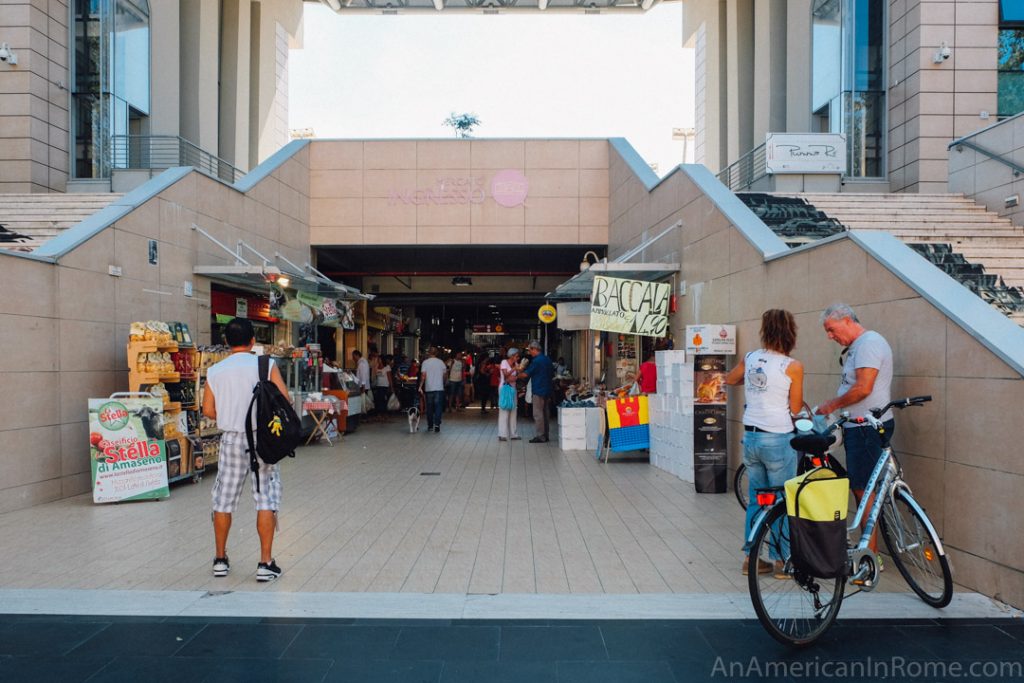 Finally, Mercato Trionfale moved indoors in 2009. Its more than 200 stalls are now housed inside a new concrete and glass building. 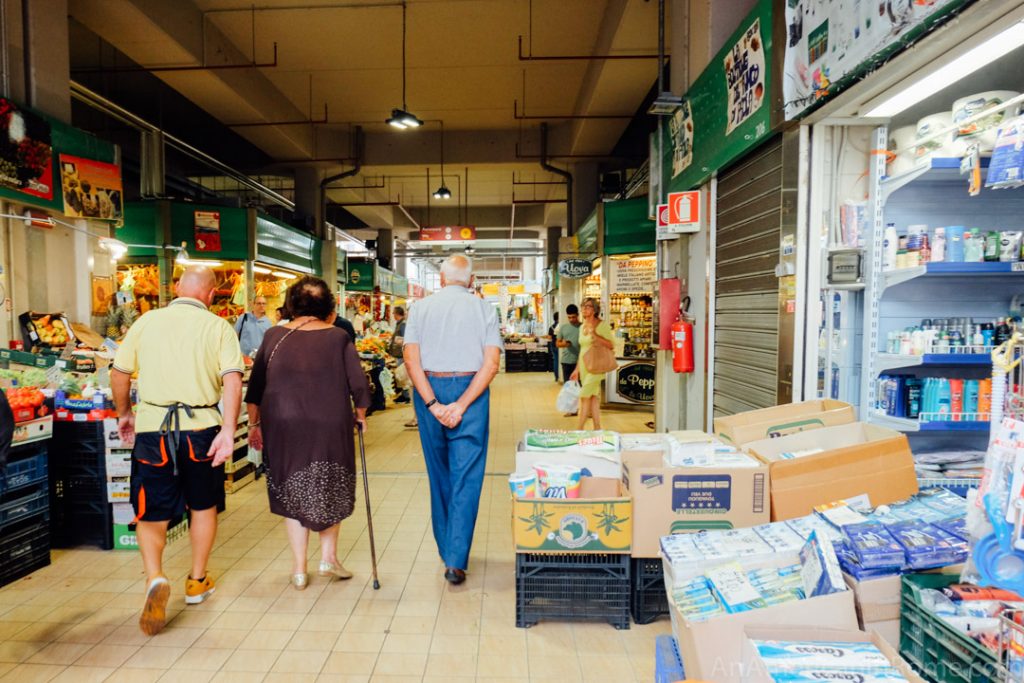 Even though the building is relatively new, it does not feel updated the way that Mercato di Testaccio does. Rather than a full makeover complete with trendy street food stalls, Mercato Trionfale seems to have simply gained a roof and a bit of color-coding.

When you enter the market, you may notice that the stalls are different colors.

Green is for fresh foods, such as fruit and vegetables. However, light green means that the stalls are farmers selling their own homegrown foods rather than re-sellers. 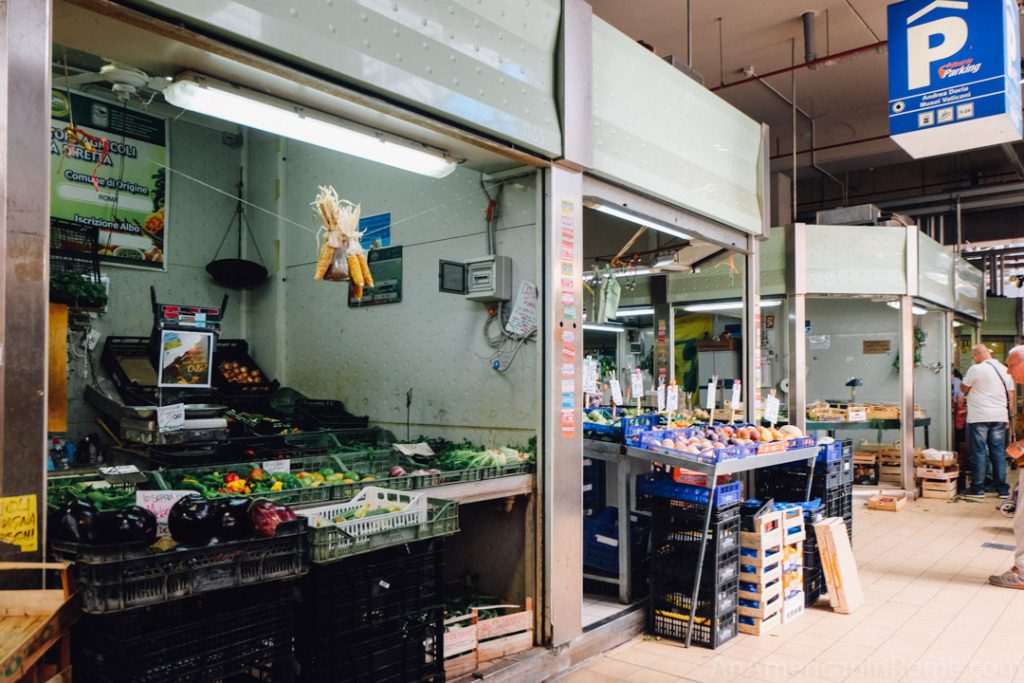 Yellow is reserved for dry goods and household items. Bakers are also yellow. 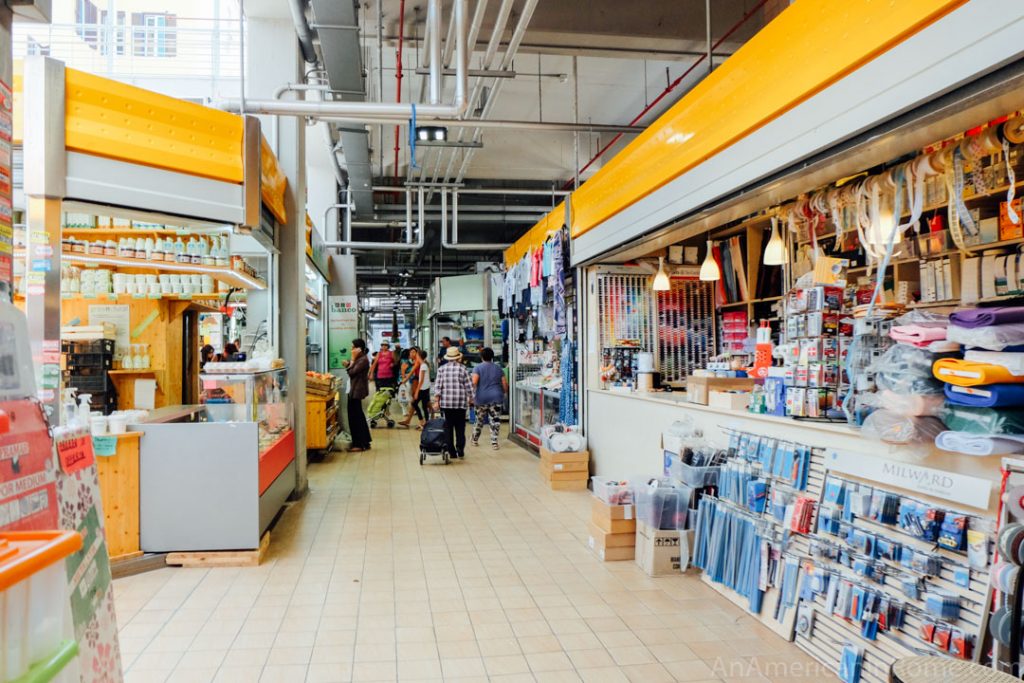 Blue is for fishmongers and red is for butchers. 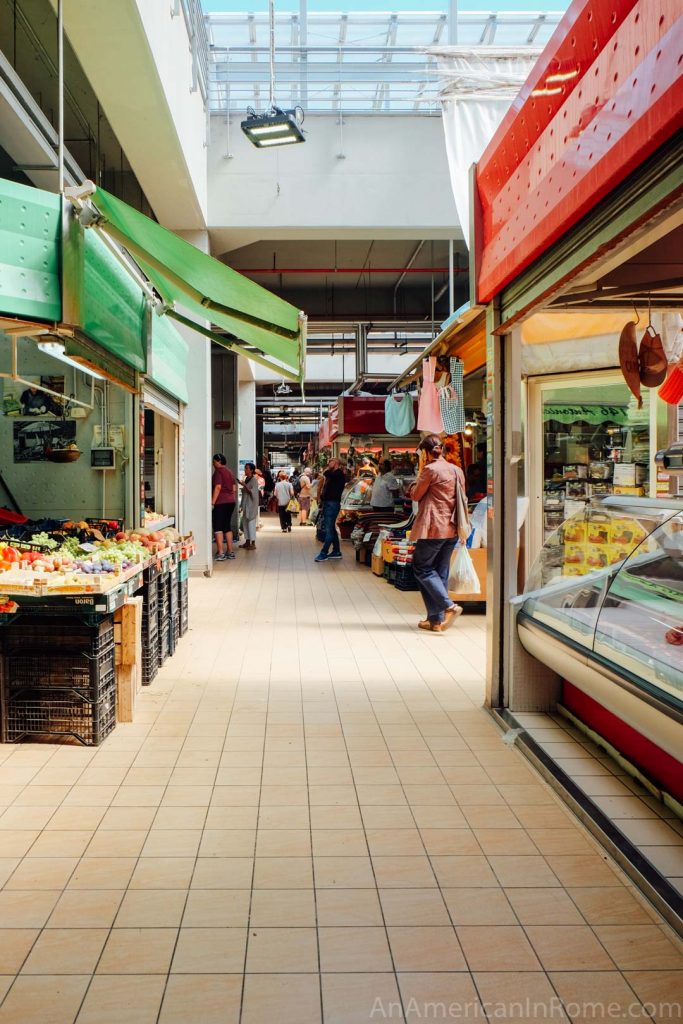 Despite its vicinity to the Vatican, one of the top things to see in Rome, this traditional market caters to locals rather than to visitors.

A majority of the market is given over to food stands and small home goods, but you can truly do just about anything in the crazy mishmash that is Trionfale Market.

There is a stand for shoe repairs, eyeglass fittings, haircuts and more. This is a major hub of activity in the Prati area. 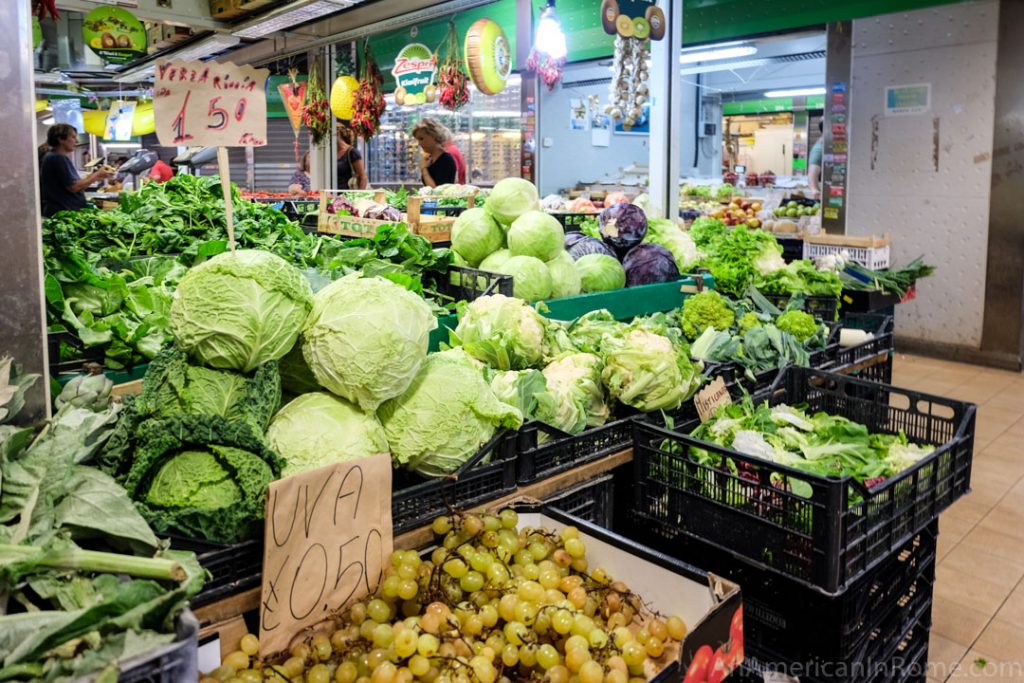 It is also one of the few markets that occasionally stays open late. Most neighborhood markets in Rome are open from about 8 am – 2 pm Monday through Friday, and this is also the case for Mercato Trionfale. However, the market stays open until 7 pm on Tuesdays and Fridays. This makes it a fantastic option for students or workers who have a hard time doing their shopping on weekday mornings.

Whenever I go to Mercato Trionfale, I make sure to stop by Stand 102, which sells excellent porchetta (roast pork) from Arricia. 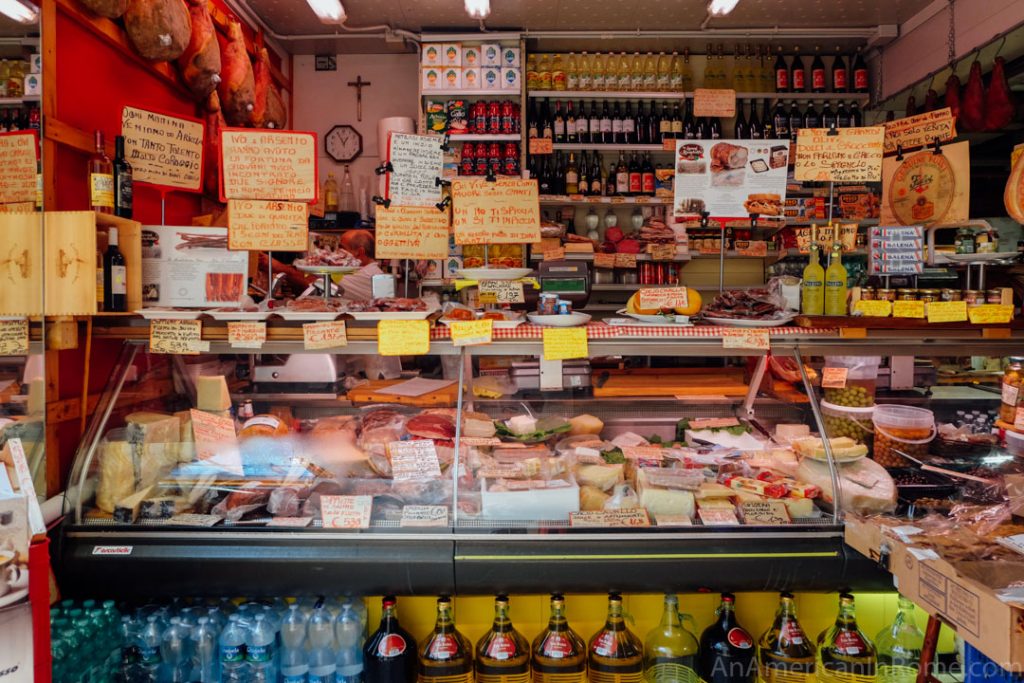 Near the main entrance at Via Andrea Doria 41, you can find da Peppino, a stall which has been selling fresh eggs at the market since 1924. These days they also sell organic honey and jams. 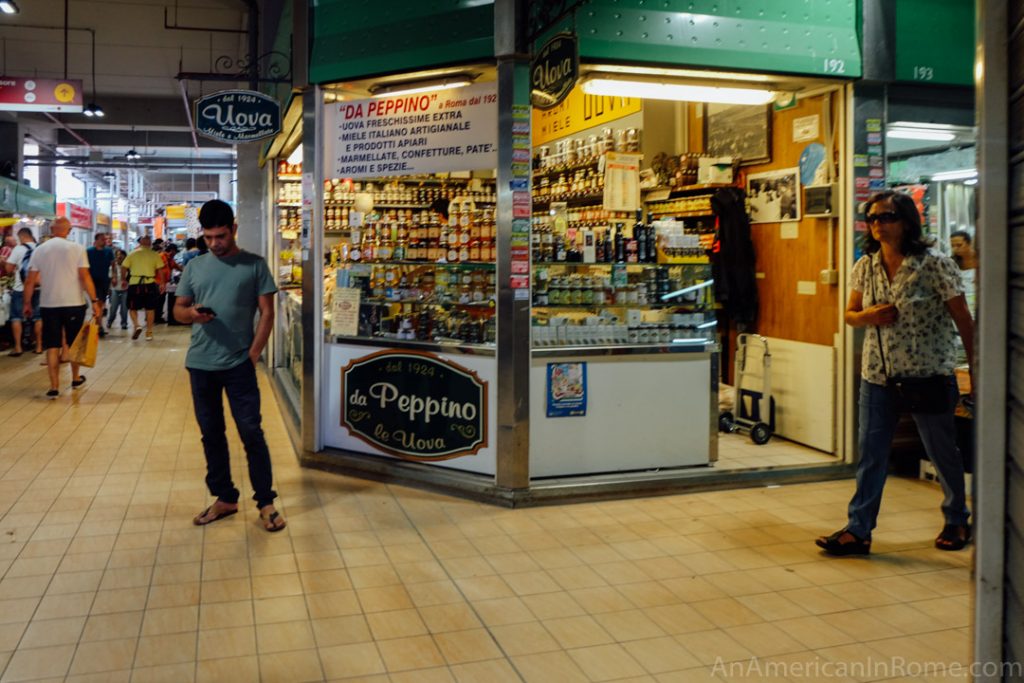 I also make sure to head to the back near the fish stalls for cheese from Riti Formaggi at stand #31.

If I were in the area, I might pop over to either Panificio Bonci or Pizzarium for some bread and/or all the pizza after taking in this unique Roman market.

Via Andrea Doria 41 (with several other entrances)
Rome, Italy (Prati)

Open Monday, Wednesday, Thursday and Saturday from 8 am – 2 pm, and Tuesday and Friday from 8 am – 7 pm (though note that not all stands participate in the hours past 2 pm).