We have friends visiting from California right now, and it seems that every time I suggest something that they just *have* to eat, it’s fried.

Example: “Hey guys! Let’s go get cheesey pasta in a bowl made of fried cheese!”

“Hey guys! Let’s go get the best fried fish in the world! Ever! It’s by this little church“

Actually, the first time I ever had a suppli, I spit it out and then warned my North American colleagues to stay away from them.  Now I get them as an afternoon snack.

Anyways, since moving to Rome, I’ve become much more open to eating fried flowers stuffed with anchioves and whatnot.  But in Naples, I was confronted by an unfamiliar  goodie: fried pasta. 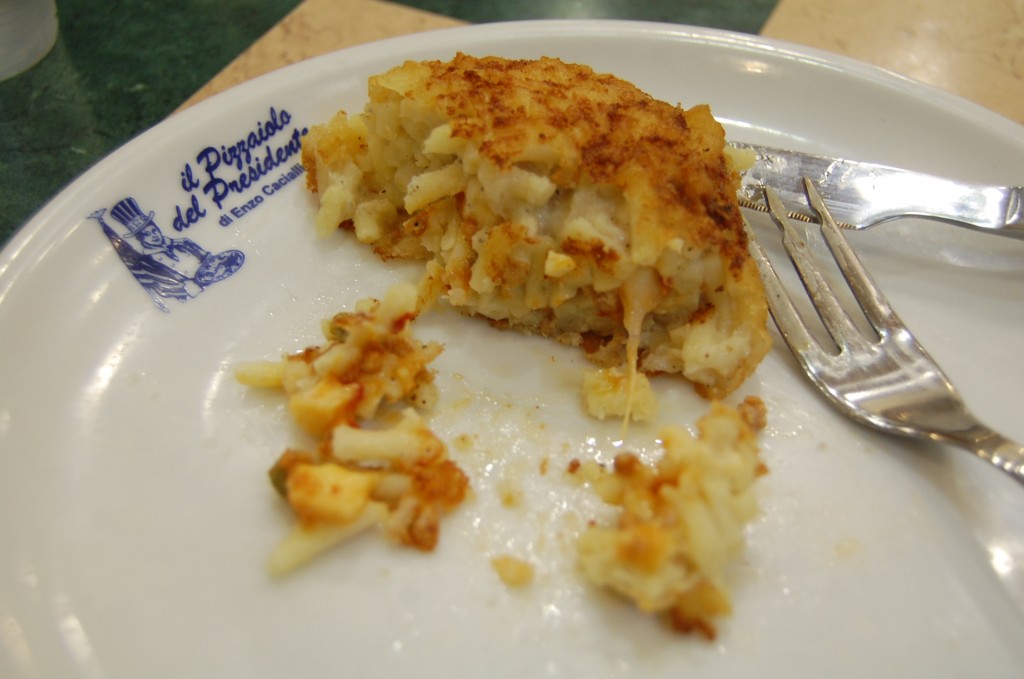 My first experience with pasta fritta was at Il Presidente. (In Italy, it’s common to start off a meal at a pizzaria with a fried appetizer, followed by each person scarfing down their very own full sized pizza).

It was… well, it was fried, so of course it was good.

My across the aisle neighbor on a recent train ride en route for a Naples day trip, explained that pasta fritta was often made to be brought along on picnics.  Thus eliminating the need to cart along bowls and forks, while increasing the deliciousness quotient of the pasta. Science: can’t argue with it.

While Il Presidente was good, I prefer to get my pasta fritta (or frittatine) from a vendor in the fish market.  It’s near the train station, if you’re feeling adventurous.