A new program launched in Rome in August has been enthusiastically embraced by the public. The recycling initiative accepts plastic bottles in exchange for free ATAC public transportation tickets, which are good on the city’s buses and metros.

Commuters can bring their plastic bottles to three metro stations to use specially designated machines to earn credits for free tickets. It takes 30 bottles to equal one ticket, which has a value of €1.50 and is good for 100 minutes once validated on a bus or metro. 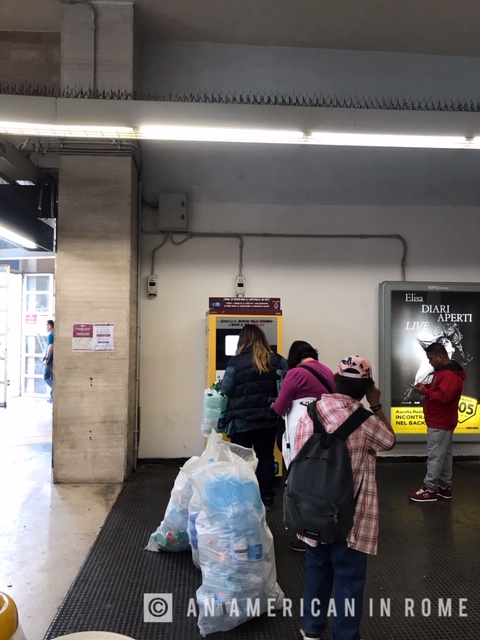 In order to collect credits, the recycling commuters must download one of two apps approved by ATAC: MyCicero or TabNet. The apps track the number of bottles recycled by the user and issue the free tickets once the threshold of 30 bottles is reached. (Side note: I personally use MyCicero to buy bus tickets in Rome because I love that I can validate it all on my phone instead of having to buy a paper ticket ahead of time and find a machine. However, the app is imperfect and crashes about 10% of the time).

The program is still experimental (it was first announced in August) but it has proved so popular that there is often a long line of people waiting to cash in their bottles for free transit.

If you want to test the system out for yourself, gather up your old plastic bottles and head to Piramide (Metro Line B), San Giovanni (Metro Line A / C), or Cipro (Metro Line A).

Rome is the first major European city to offer this kind of recycling program in exchange for public transportation tickets. I am definitely intrigued and would like to see more of it. However, the city is also struggling with waste disposal with the company that handles trash and recycling pickup recently going bankrupt. I would love to hear your thoughts on the sustainability of something like this – and if you think that Rome will be able to roll the initiative out to include more recycling points in additional metro stations in the future.