Most of the time, I have good news to post. Today, it is mix of good news: the EU is celebrating 60 years of existence and commemorating the signing of the Treaty of Rome.

The bad news: there are protests planned in Rome.

European Heads of States, Government officials and other dignitaries will be in Rome for the ceremonies on Saturday March 25th but traffic circulation restrictions will be imposed starting from Friday, March 24th.

The main areas affected are in the center of Rome, primarily Campidoglio, Piazza Venezia and Fori Imperiali. (But walking through Testaccio last night I saw that they had roped off the area around Piramide metro, Via Marmorata and Piazza Testaccio).

But what you should really be aware of are the five demonstrations that have been authorized for March 25thin the below locations:

Here is a map of the demonstration routes from La Repubblica (note that no one will be allowed in the blue zone at the Capitoline hill starting from midnight 24 March): 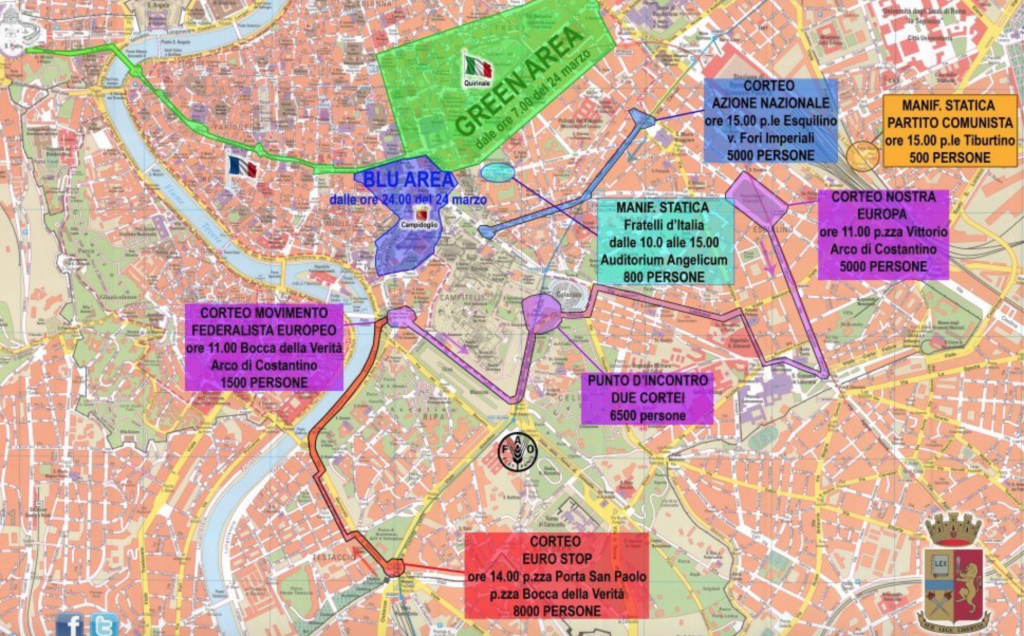 Strict security measures will be in place for the whole city center.  Although the demonstrations are intended to be peaceful, however security officials are also bracing for riots, which have occurred once before since I have been living in Rome.

If you can, it is recommended to avoid these areas, monitor local media and exercise caution.

If you are in area, please note that all backpacks will be searched, and anyone wearing a motorcycle helmet or hat that conceals their face will be stopped.

If you see any unusual events or suspicious behaviour you can report it to the Italian Authorities by calling “112“. English speaking operators are available to respond to calls.