I have a few unwritten rules for this blog:

I am now going to break every single one of those rules. (Feel free to skip to another post, or muddle through this with me at your own risk.)

I am seeing a trend in Rome that I don’t like one bit. €25 hamburgers with cocktail pairings and password-required “social clubs” come to mind.

But as ludicrous as I assume these places will be, I go and I try them because I am a human adult capable of forming my own opinion about the latest hotspots.

Then? I refuse to write about them because after I try them I can personally confirm that they are overhyped and overpriced.

Recently, it has started to feel more and more like Rome is trying some New York attitude on for size, and it doesn’t work for me. After many (too many) years in LA, I have waited in my fair share of lines and sat in a sufficient number of go-to-be-seen it spots.

That is simply not my scene, and moving to Rome felt like balm for my secretly jaded soul.  There was real food made by real people that was heavy on traditional and light on artifice.

But I didn’t move to Rome just to get away from a scene. I moved to Rome because I work in food policy. I also work in human rights.

I have very, very little patience when it comes to elitism with food.

I sometimes eat fancy food, so I know that this puts me toeing a dangerously hypocritical line. But I find food as a status simple to be utterly distasteful. Spending hundreds of dollars/euros/pounds on a meal might be an amazing experience, but I regularly travel to countries where people live on that same amount for a year, and so I cannot reconcile this kind of excess with the work that I do.

In short: I could find it hard to care less about how exclusive your new restaurant/bar/taco truck is if the food or drinks are lackluster.

So of course I have heard about the Jerry Thomas Speakeasy. Everyone has.

Vanity Fair named it one of the world’s best bars (which, side note, is absurd).

I was a little bit curious but too lazy to make a reservation PLUS figure out a password. However, with friends visiting who were also intrigued, it seemed like the moment to go had finally arrived.

So. We went. And we waited in an alley.

Well, first we knocked on the door and a hatted gentleman looked out of his golden peephole and asked for the password.

And if it is possible to audibly roll your eyes? Well, that’s what I did. I rolled my eyes so effing hard and then shuffled off to stand against the alley wall. 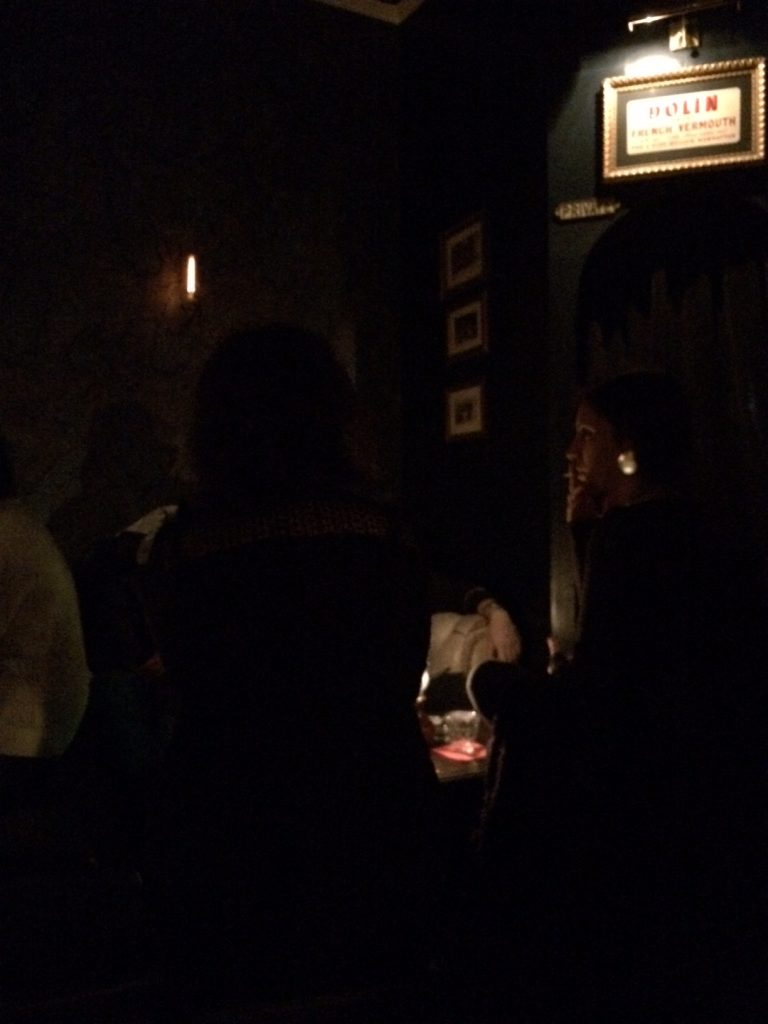 Eventually, we were granted access to the darkest bar I have ever been in.

With no tables yet available, we were escorted to the place where we were to instructed to wait at our place by the bar… and at that point I laughed out loud.

Our “place at the bar” was approximately 6 inches by 12 inches. For 4 people. The water glasses they left barely fit, and four humans most certainly did not fit. 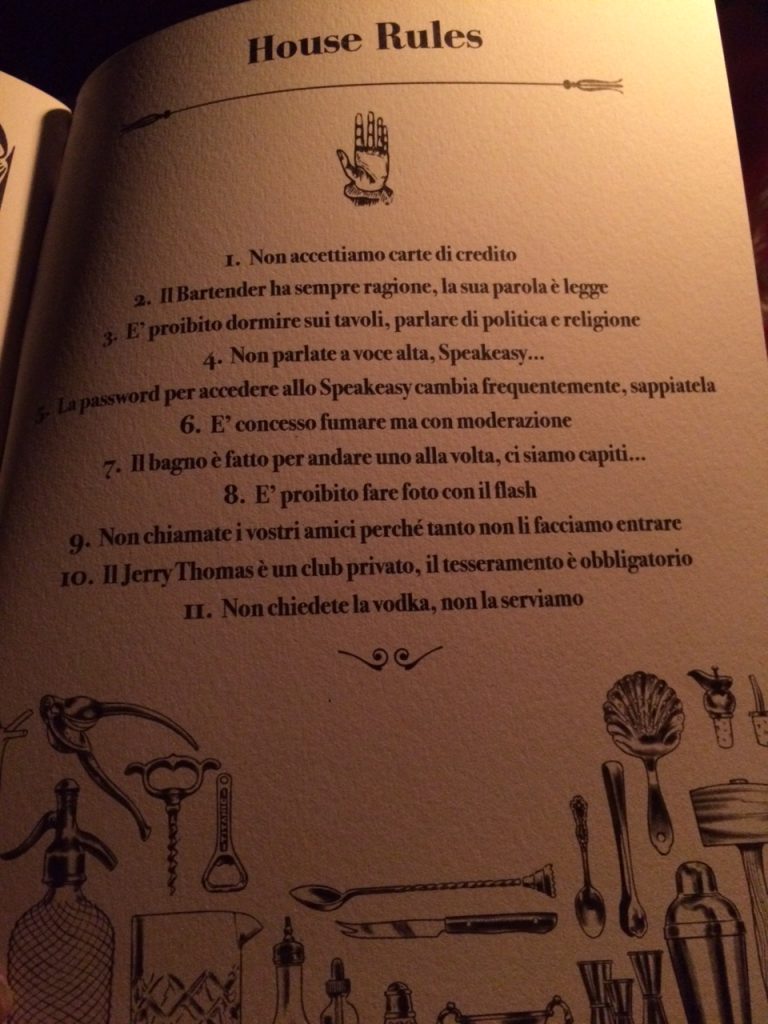 Waiting for the table, I had time to read the house rules.

Let me quickly summarize for you:

Oooooooook. Where do I start? Maybe some of the rules are tongue in cheek, but I found the rest annoying.

Jimmy, who sometimes disdains cocktails, was clearly taking this less seriously than I was.

Because Jerry Thomas is a private “social club” instead of a bar, you have to be a “member.” This requires filling out a membership card and paying €5. When Jimmy handed me his card for safekeeping, I saw that he had filled it out under the name Marlon Brando. Date of birth? 1924.

But it was rule 6 that I hated. Smoking IN the bar. The worst. I left smelling like an ash tray. 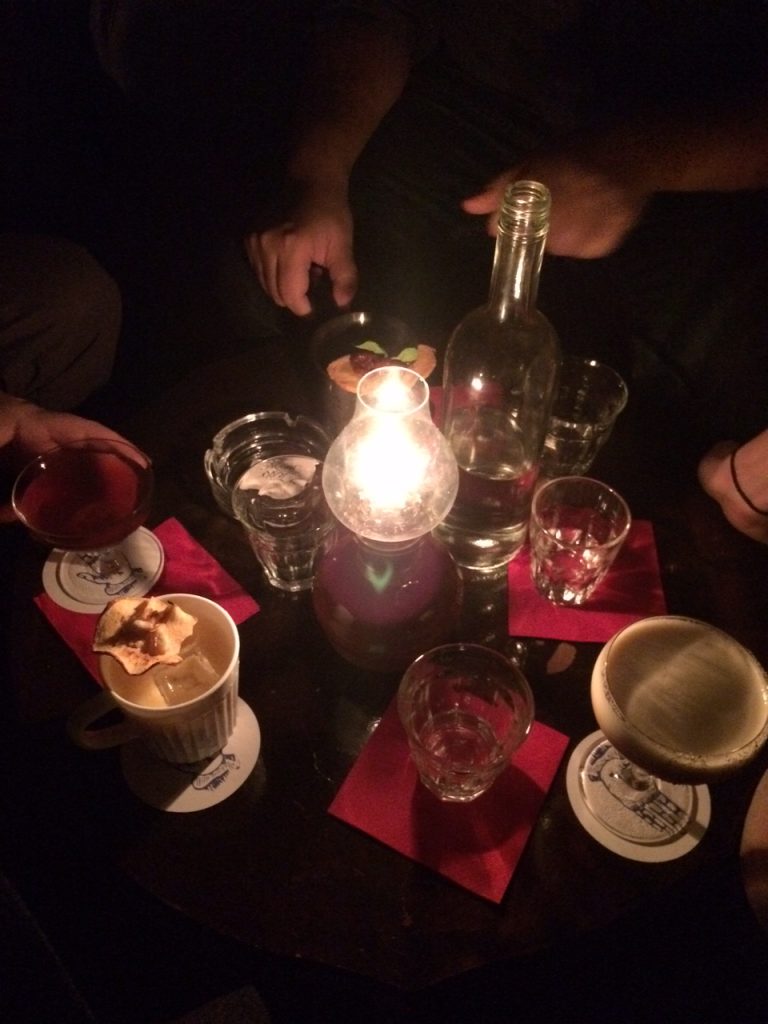 But we did eventually get a table, hemmed in on every side with many many (too) many other drinkers.

And we did eventually get drinks.

Jimmy, the only sane one, went with a classic Manhattan.

I got something called a crumble that was served in a teacup with too much ice. (Ice in tea cups simply does not work. Tea cups were not built for ice. Nor for cocktails).

Our friends ordered something with barbecue sauce (?) and a tomato-based drink that was served in a pot with a bruschetta on top…

Since the alley waiting, I had been thinking the whole thing was truly overhyped, but it was the cocktails that really confirmed that for me.

For the record, this rant has nothing to do with the staff, who were overwhelmed but lovely.

But it has everything to do with the mass hysteria Jerry Thomas has created and thrived on.

You have literally got to be kidding me.

I am sure the project began with the best of intentions. I am positive it was meant to be a temple to mixology – a little hideaway where the bar’s signature spirits could be showcased.

But they have created a monster.

Go to La Punta instead.

2 thoughts on “Jerry Thomas Speakeasy in Rome: A Rant”