It only takes a few minutes of walking through Garbatella to spot how different this quiet area is from the Roman districts slightly closer to the centro storico. Found three metro stops over from the Colosseum, Garbatella is preparing to celebrate its first centennial, making this destination a very young one by Eternal City standards. The unique neighborhood was established in 1920 as part of a planned community to house the workers who flocked to the capital for jobs in the nearby industrial Ostiense area.

What makes Garbatella so intriguing is its distinctive design. This Rome neighborhood was modeled on the garden city suburbs that were popular in England in the early 20thcentury, creating a particularly unique style of architecture and sense of community. But from its humble origins, Garbatella has grown into one of Rome’s culture centers, with art, architecture, gastronomy, and performances waiting to be uncovered.

Here is how to experience the district for yourself with a guide to spending one day in Garbatella.

With ample outdoor tables and plenty of homegrown characters, Bar Foschi has been Garbatella’s favorite coffee bar since the 1950s.  New pastries and biscotti appear with the seasons, including chestnut flour cake in autumn and tartlets topped with tiny wild strawberries in summer. However, the fresh cornetti filled with jam or honey and a strong coffee are the best way to kick start a morning of living like a local in this beloved corner for Rome. Take the pastries and cappuccini outside to enjoy the simple morning meal overlooking the neighborhood’s iconic Palladium theater. 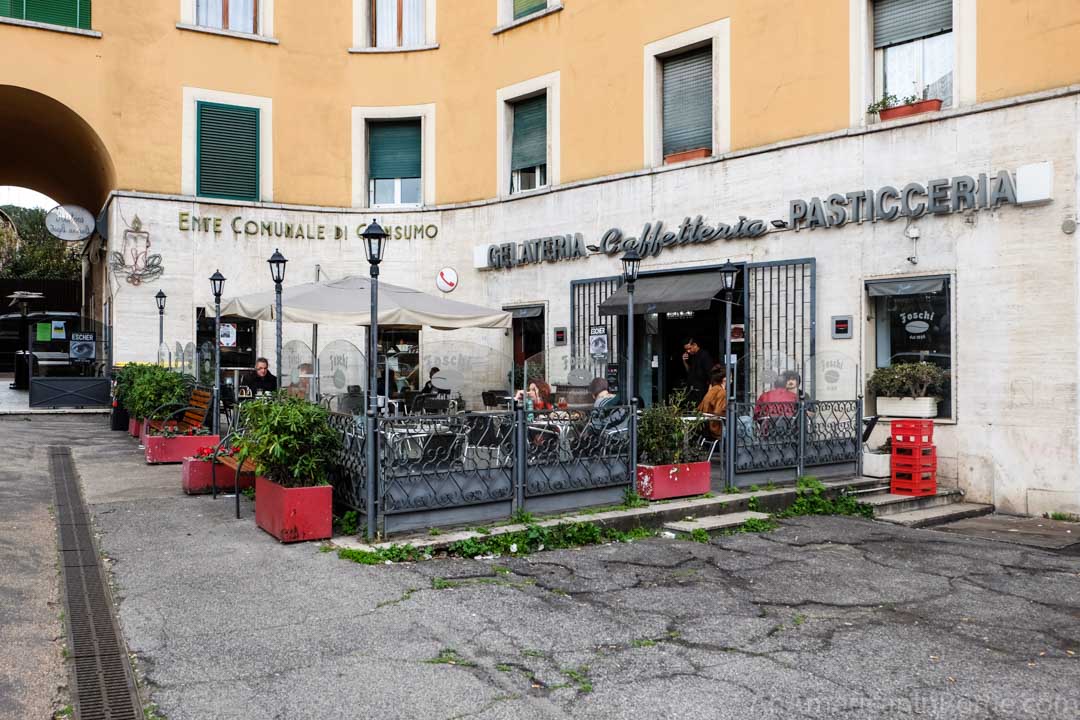 To truly experience Garbatella, you need to start with the lotto. Rather than a gamble, “lotto” in this case refers to the unique style of housing in the neighborhood. Keep an eye out near the entrances to the small clusters of apartments and you will note numbered lotti – property lots. 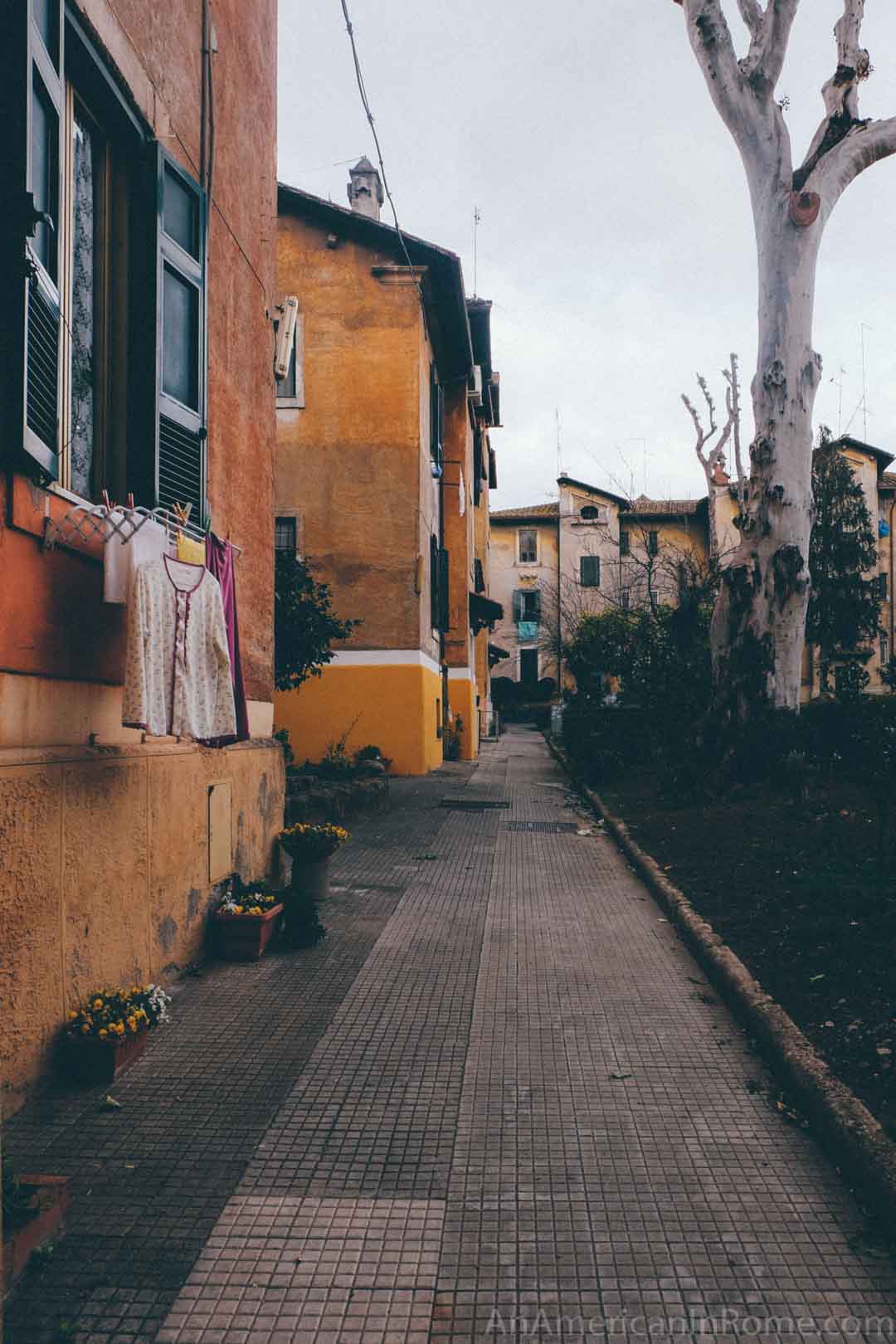 The flats in Garbatella were first constructed as public housing and each small complex was included in a numbered system as part of the organization and administration. The homes have all long since been privatized but the lotti remain.  Each lotto has different architectural elements, but the defining feature is that every set of flats is built around a central courtyard.

Step through the open gates along the narrow lanes in the heart of the neighborhood and be transported back to another era. The internal yards were envisioned by the urban planners of 100 years ago as green spaces that could be used as vegetable gardens and gathering places. Today they are still filled with flowers and lines of laundry drying in the sun. 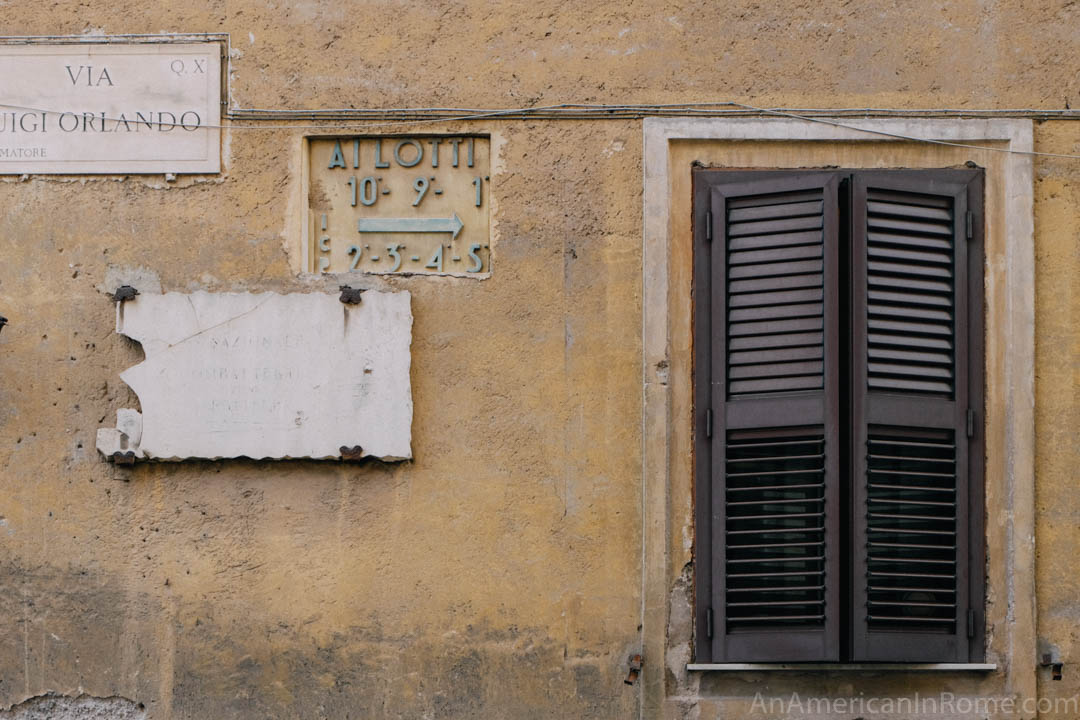 There are 62 lotti in total and exploring the different gardens and courtyards over a meandering morning stroll is the best way to acquaint yourself with the various corners of the neighborhood while gaining a taste of the individuality found in this singularly Roman quartiere.

The hidden lotti of Garbatella are just the first taste of the tranquil spaces in this traditional neighborhood. On sunny Roman days, the best place for lunch in Garbatella is inside a park tucked away behind the two-story homes. Under the shade of umbrella pines, La Casetta Rossa sets tables outside its little red kitchen to serve up hyper-local cuisine. All of the ingredients in the ever-changing menu come from within a few miles of Rome and the laidback setting has made this eatery a cult favorite in the area. 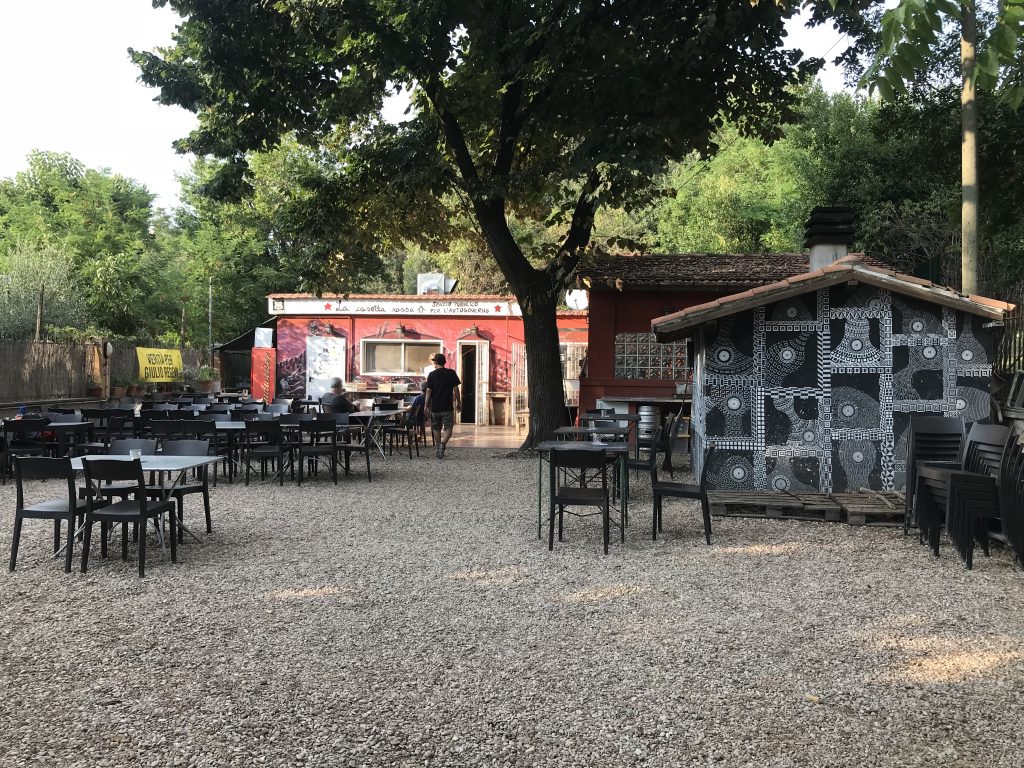 Cross the soaring white-arched Ponte Settimia Spezzichino bridge, named in memory of Rome’s only female survivor of Auschwitz, on the edge of Garbatella. Traversing the Ostiense overpass will bring you to the industrial center where many of the neighborhood’s original residents once worked. 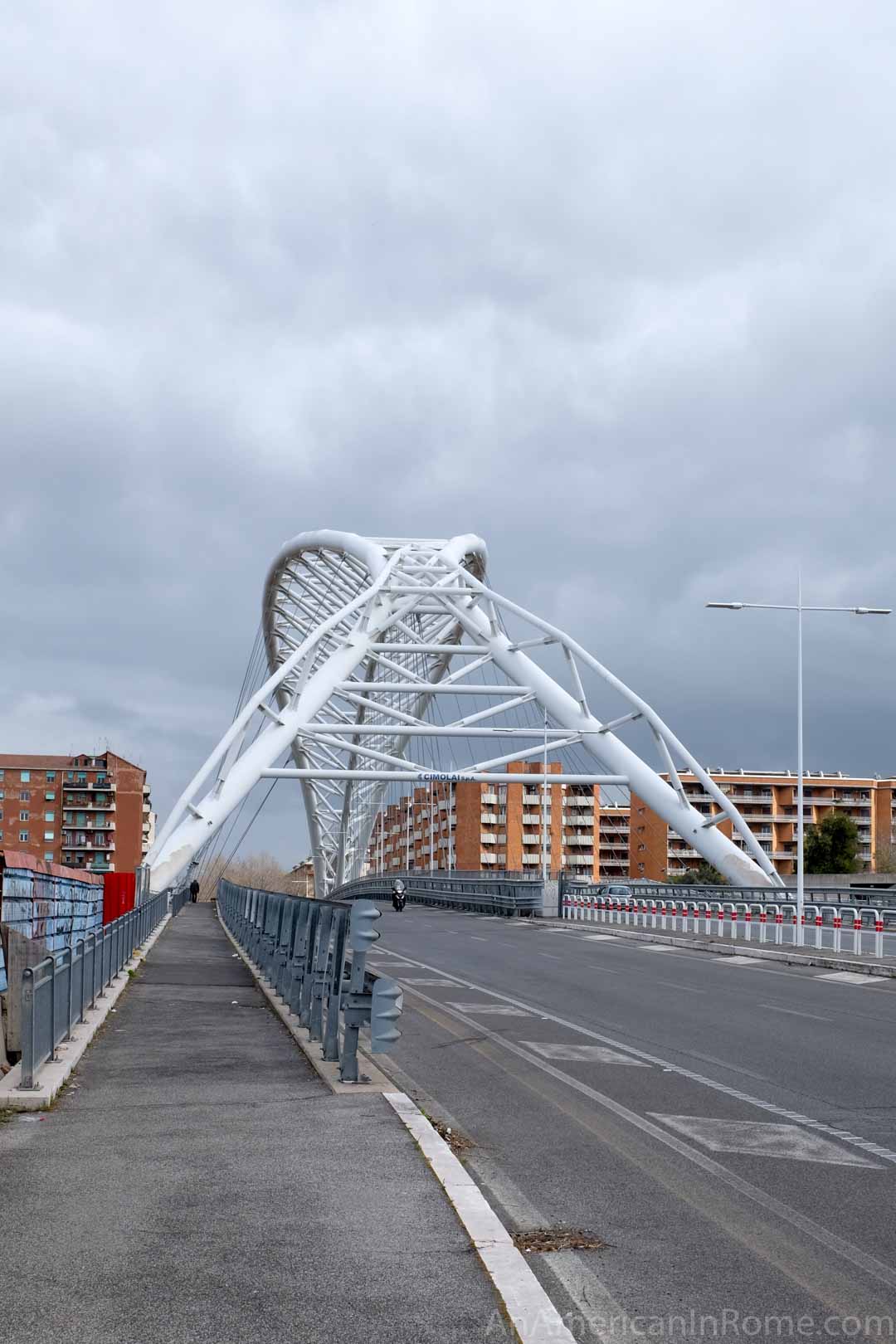 Still undergoing an urban revival, the old factories are being reclaimed for new enterprises. The best example is the stunning museum of Centrale Montemartini. Inside the decommissioned electrical plant, marble statues are displayed next to gears, levers, and engines which once powered the city. The juxtaposition of old and new, art and industry, is captivating.

Moving from Ancient Rome to the 21st century, head back to the center of the neighborhood to take in the contemporary exhibits at 10b Photography. The gallery hosts beautifully curated shows from individuals as well as inspiring exhibits of archival photographs.

With wood-backed chairs and a handwritten chalkboard menu of wines by the glass, Enoteca La Mescita looks the part of a traditional Italian wine bar. A closer look through the labels lining the shelves will reveal that the corner enoteca has an impressive selection of whites, reds, and rosatos from across the country, but puts every emphasis possible on natural wines. Dive into a bottle with a bit of organically-raised salami on the side, and grab one of the few high stools outside for an open-air aperitivo. 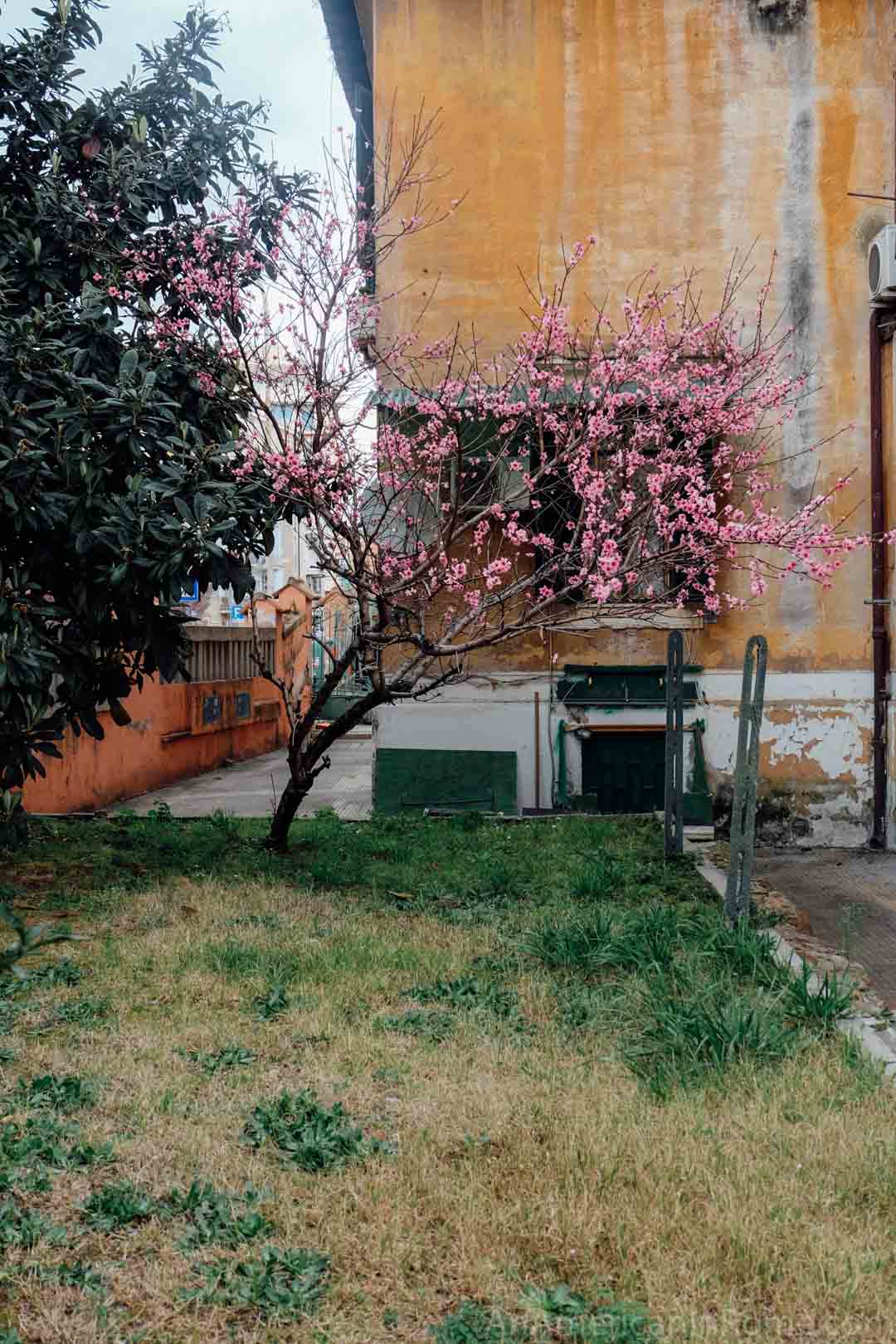 The best dinner spot in the neighborhood lies just around the corner at Al Ristoro Degli Angeli. The historic trattoria has been a Garbatella staple for decades and specializes in Roman classics paired with an excellent wine list of bottles from Lazio. For pasta, the cacio e pepe served in a crispy Parmigiano bowl and the homemade fettucine with aged cheese and toasted sesame are both excellent, but it is hard to resist the “Garbatella-style potatoes” based on the ones the owner ate as a child – with bay leaf, rosemary and onions. 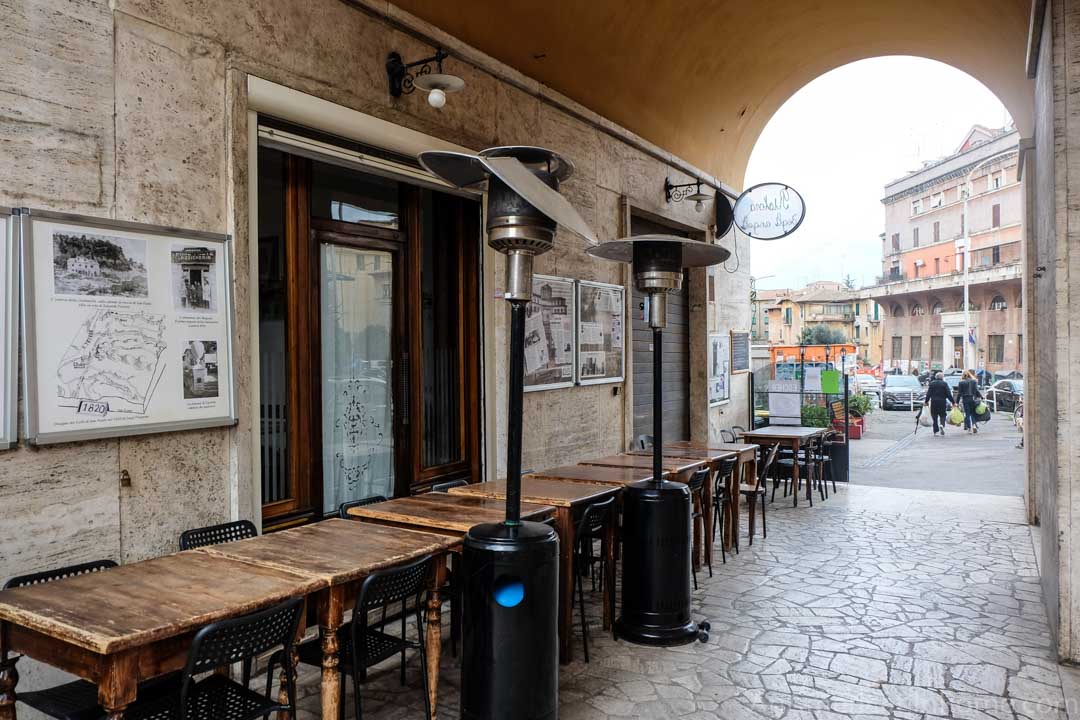 The iconic Teatro Palladium is one of the neighborhood’s most treasured cultural landmarks. It opened as a cinema in the mid-1920s but is now managed by the University of Roma Tre and has a full lineup of dramatic and musical performances. Check the schedule online to plan a night out with seats on the second-level balcony inside the retro theater. 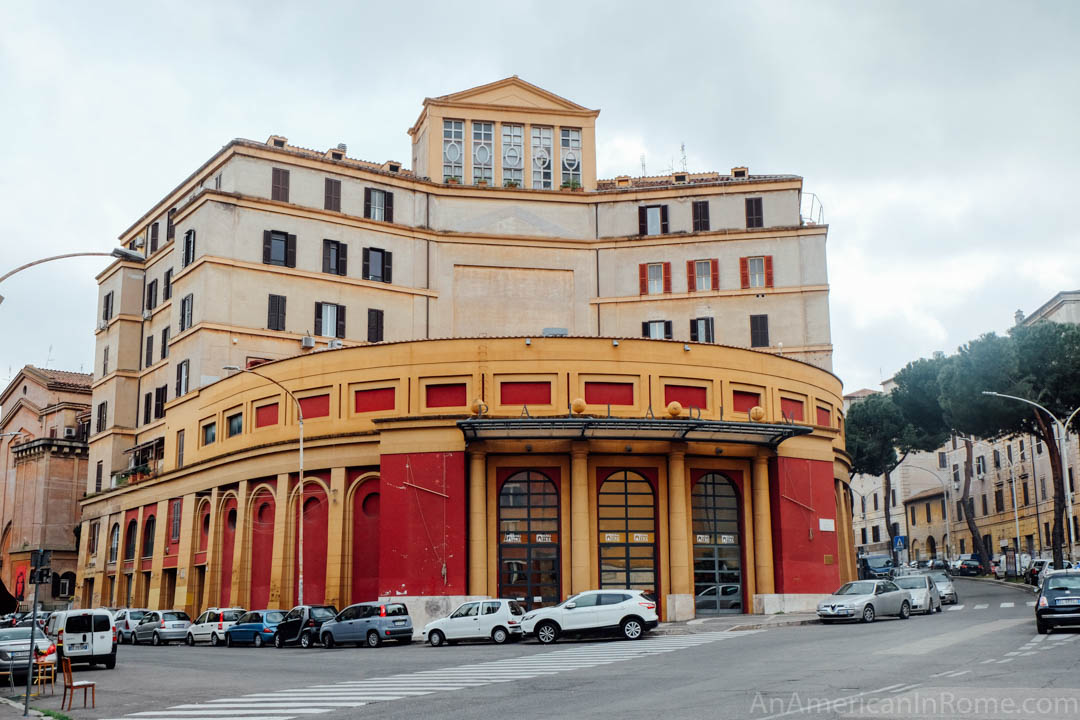 After dinner and a show, wind down the night at Latteria Garbatella. The cocktail spot has a spacious terrace for an outdoor nightcap, or you can snuggle up in the leather lounge chairs flanked by vintage vinyl inside. 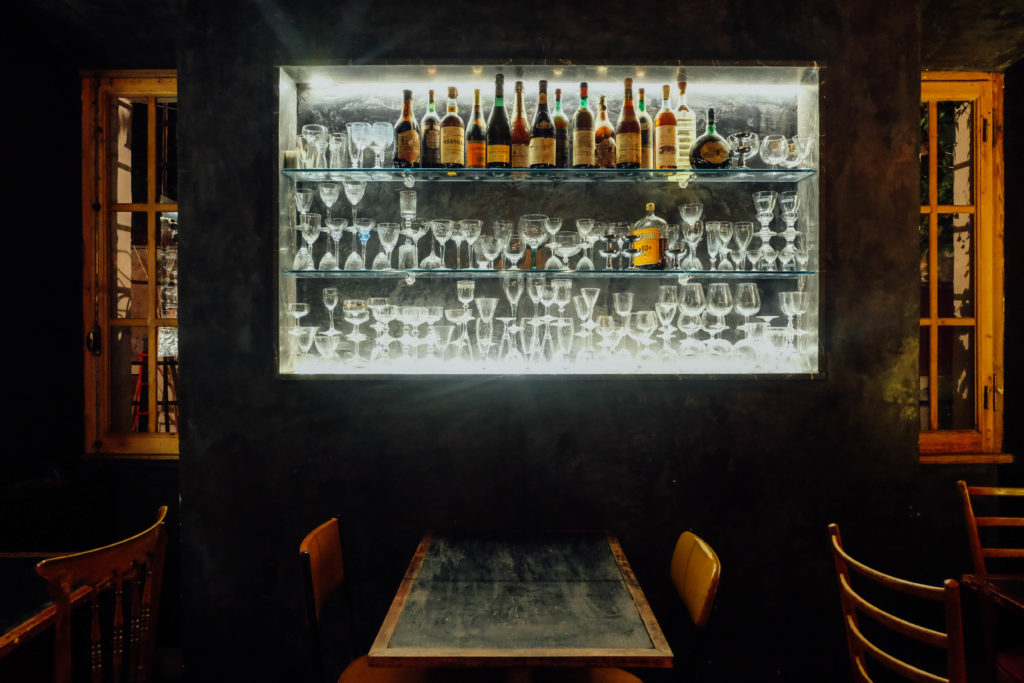 Have you ever visited Garbatella before? What do you love about this corner of Rome?