Did I tell you about that one time my sister came to Rome? My big little sister (so called because while I have several years on her, she has been taller than me since she was 14).

When I asked her what she wanted to do in Italy she came up with:
1. arial yoga
2. hike a volcano

Needless to say, neither of those possibilities had ever really occurred to me, but I set out to try to make it happen. Let me put you out of your misery right now and let you know that only 50% of those things happened. Hanging from the ceiling and stretching was not to be, but we did find ourselves on a volcano- Stromboli. 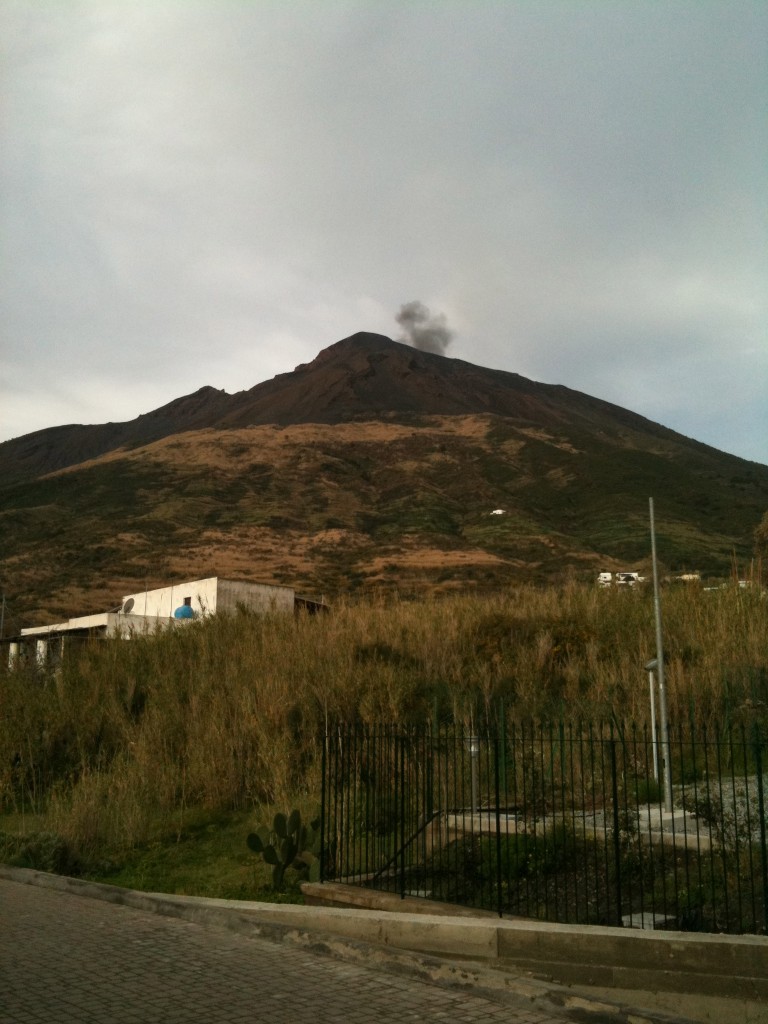 The volcano is an island in and of itself in the Aeolian Island chain off the north of Sicily. It’s possible to get there by taking a ferry from the port of Milazzo (with the closest airport probably being Catania). Should you need to get off the island, say because of a giant tsunami, simply follow the helpful evacuation route signs. 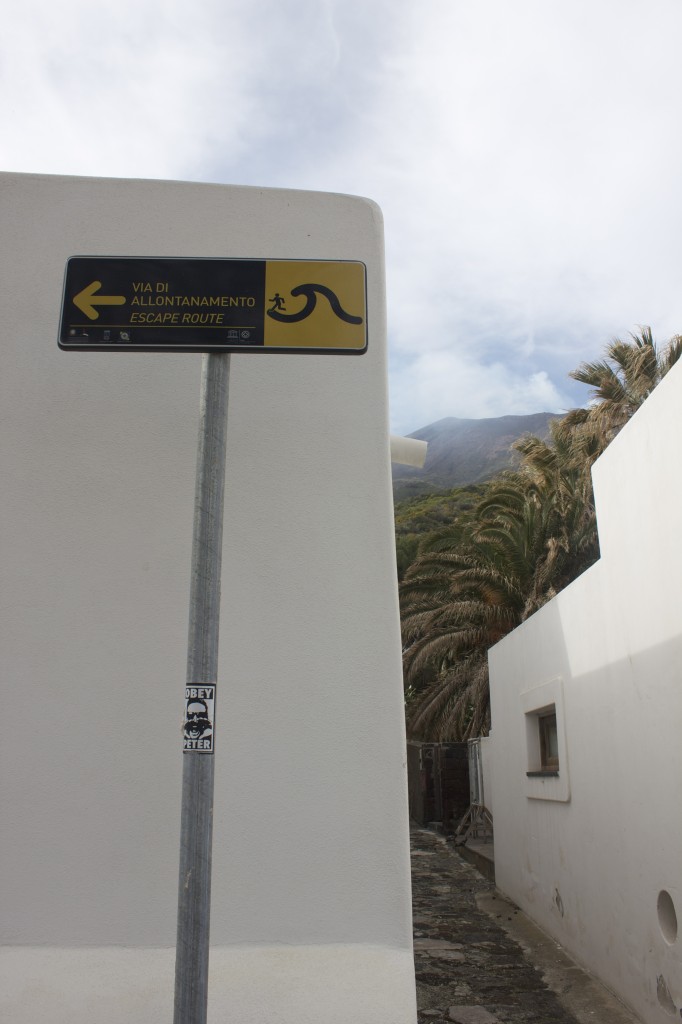 Note that the evacuation route to escape the tsunami will in fact take you closer to the nearly continuously erupting volcano. Such is life and sometimes you just gotta pick your poison. 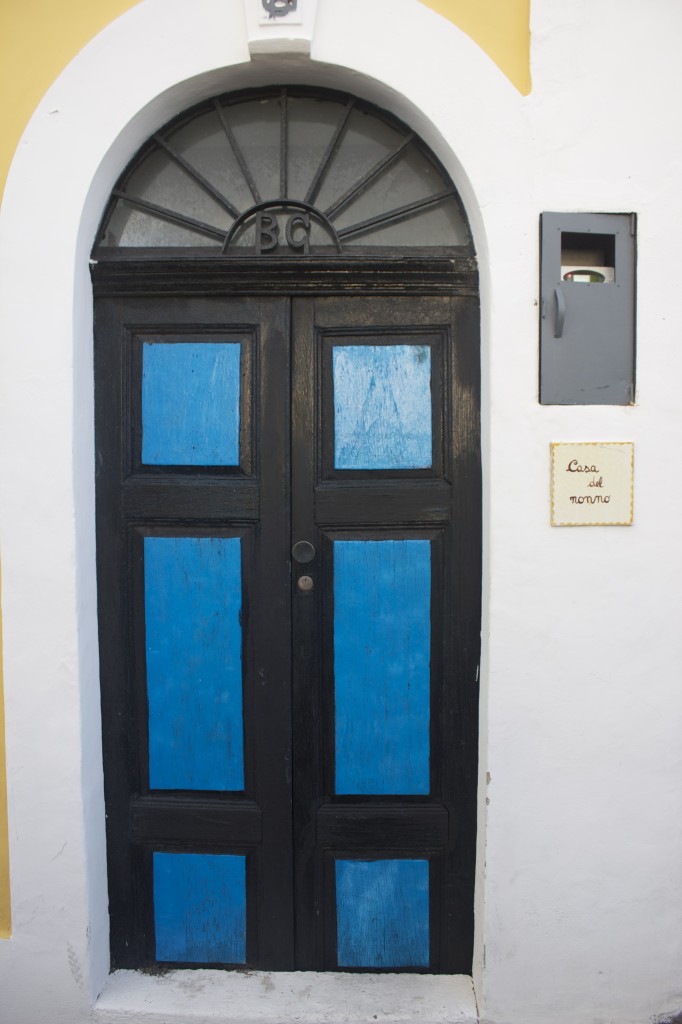 The island has a population ranging from 400 to 800 depending on the season. It has nearly uniform white washed homes and plenty of charm.  To get to the town from the port, head up an incline, any incline… you’ll find it. 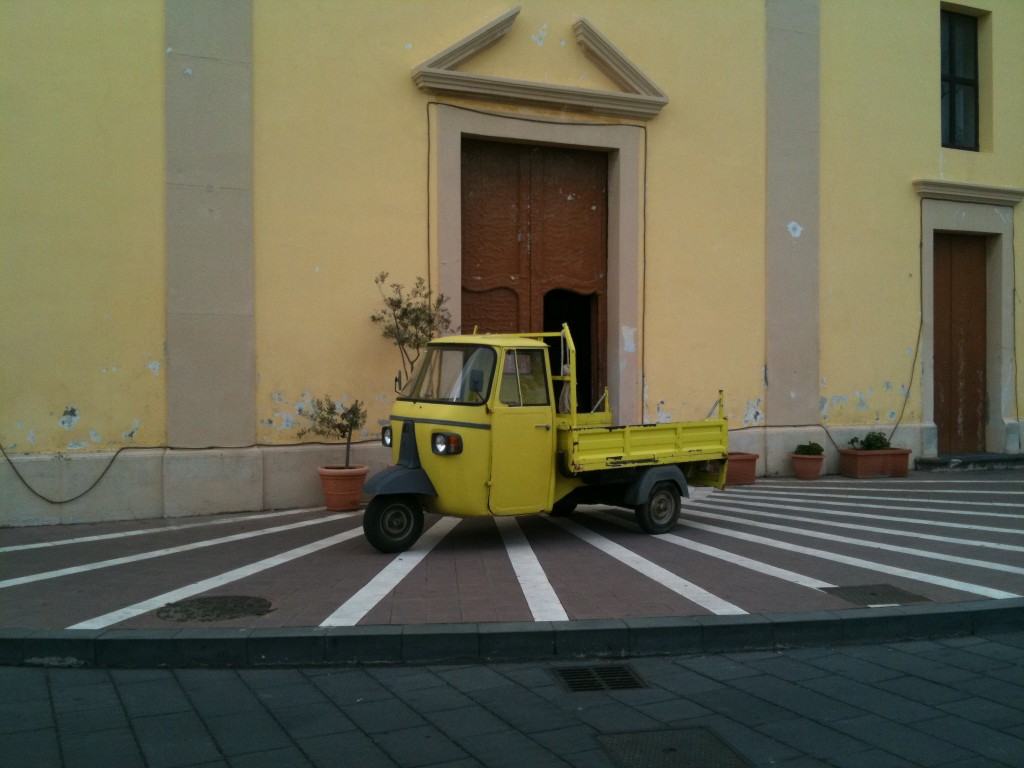 The center of town is the main church, which is surrounded by trekking and rental companies. There are no cars allowed on the island so ape (three-wheeled flatbeds) are omnipresent. 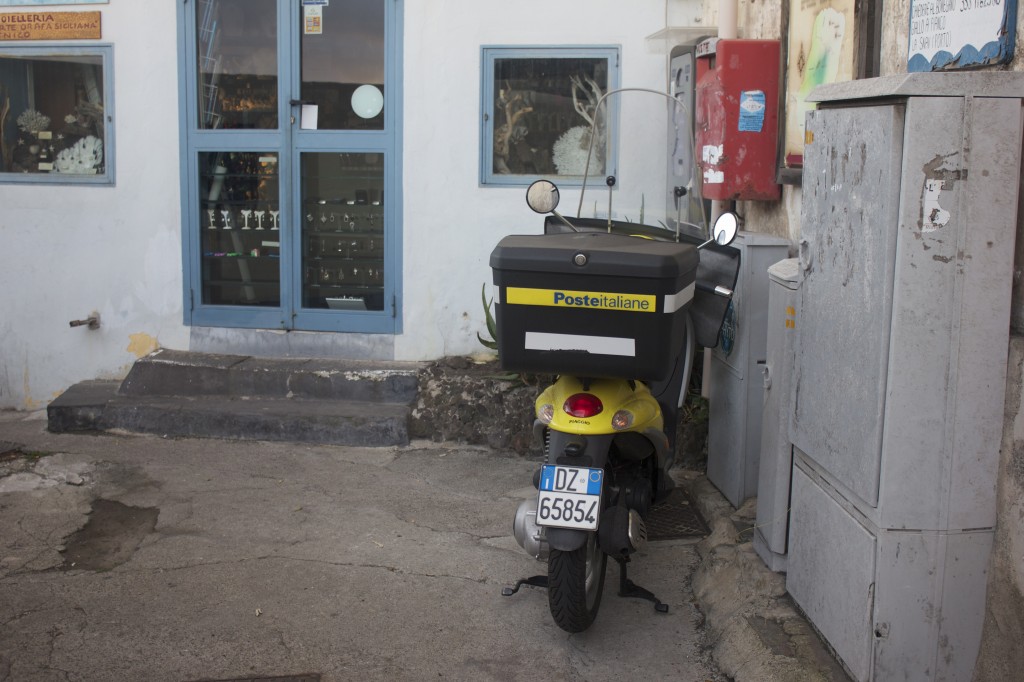 Or instead of the ape, you can choose motorini as your mode of transport. Here’s the mail delivery motorino. Given Poste Italiane’s inability to deliver packages from the US in less than 5 weeks, I am pretty sure that a full switch over to motorini nation-wide could improve efficiency. Or it certainly wouldn’t hurt it. Jaysus. (Ok, I’m done). 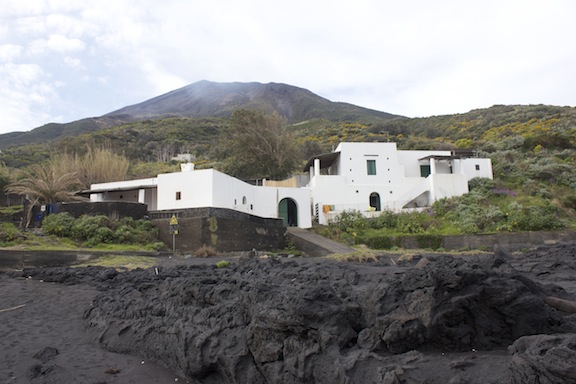 We stuck to walking and explored the inhabitable side of the island on foot in a couple of hours.  The black sand beach provided a good view of the crater and we finally realized that the “thunder” we had been hearing since we arrived was definitely eruptions, timed about 15-20 minutes apart. 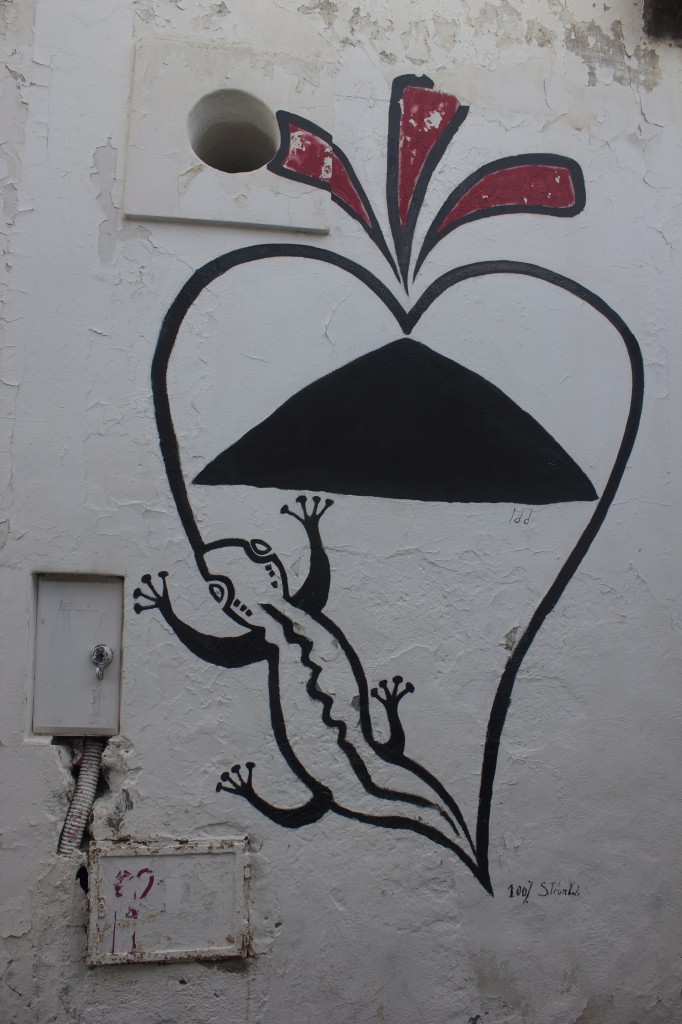 The volcano cannot be ignored and the inhabitants of Stromboli have embraced it.  They say that the volcano symbolizes love and each eruption is a bit of passion. You’ll find heart symbols encompassing the volcano all over the island.

And who doesn’t love love? After a power nap, we were ready to scale the romantic precipice. 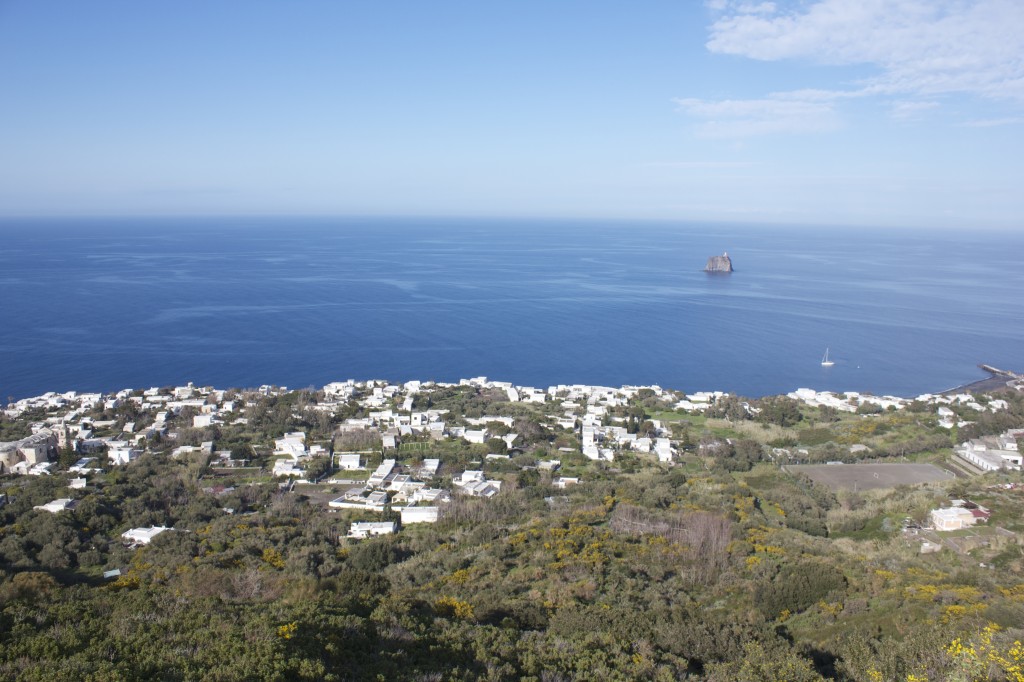 Those warm fuzzies powered us upward where we were treated with a gorgeous view of the village below. That is all of the livable part of Stromboli. The other side is completely barren due to, you know, the ash and LAVA.

In the above photo you can see a rock formation peeking out of the sea. That is Strombolicchio- the old Stromboli volcano that has since died and sunk into the water.

While this was a lovely vantage point, we still had 2.5 hours (!!) of a nearly vertical climb ahead of us. 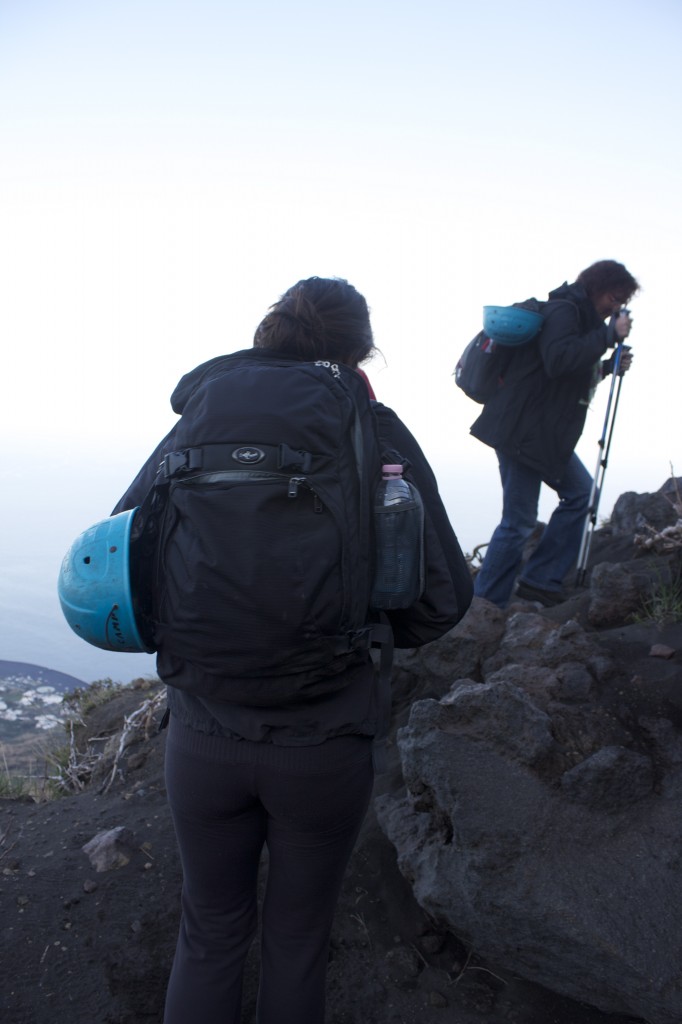 I’m serious. It was straight up. This did not seem romantic any more. 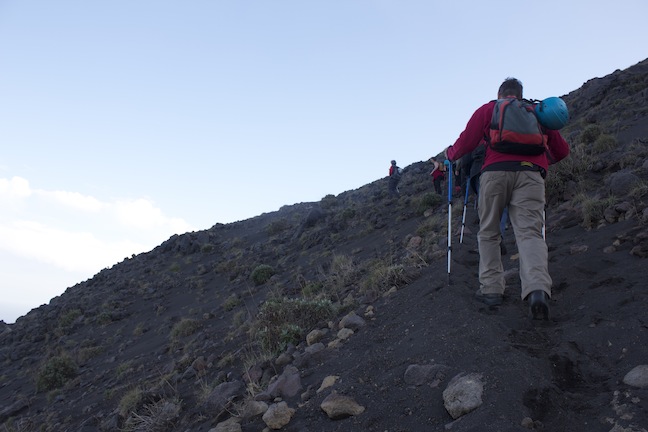 Seriously, most people come to Rome and want to drink wine and eat delicious food. Only my sister would decide to trek for 6 hours up an (extremely) active volcano. 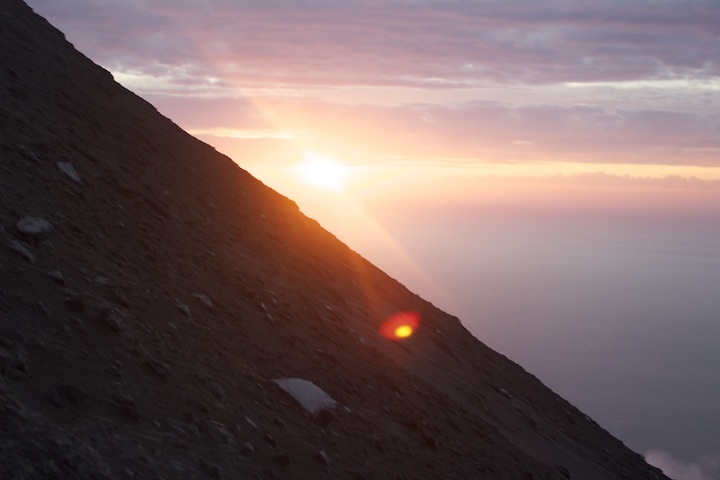 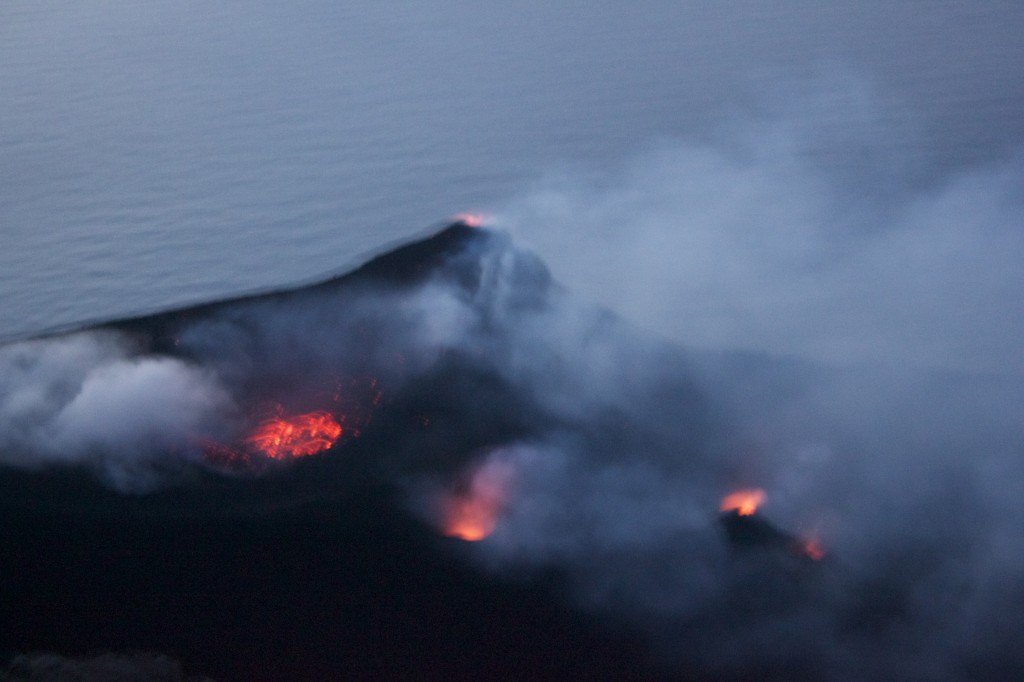 I don’t have any good shots of the eruptions because they were *&#ing unpredictable and sometimes a little too close for comfort.  It was awesome.

But I definitely had that moment, that I often get in Italy when doing something slightly questionable, where I think: This would totally not be allowed in the US.

But safety regulations be damned! We had rented blue helmets! Those must be good for something! Right?!?!

It was worth that excruciating hike to stand on top of the world for a few minutes and experience something truly ancient and powerful.

But then there was a giant explosion right next to us and the guide was like: Yeah, time to go.

The hike down is in pitch blackness but is much easier then the way up. You basically slide down ash for most of it, sinking in with each step. 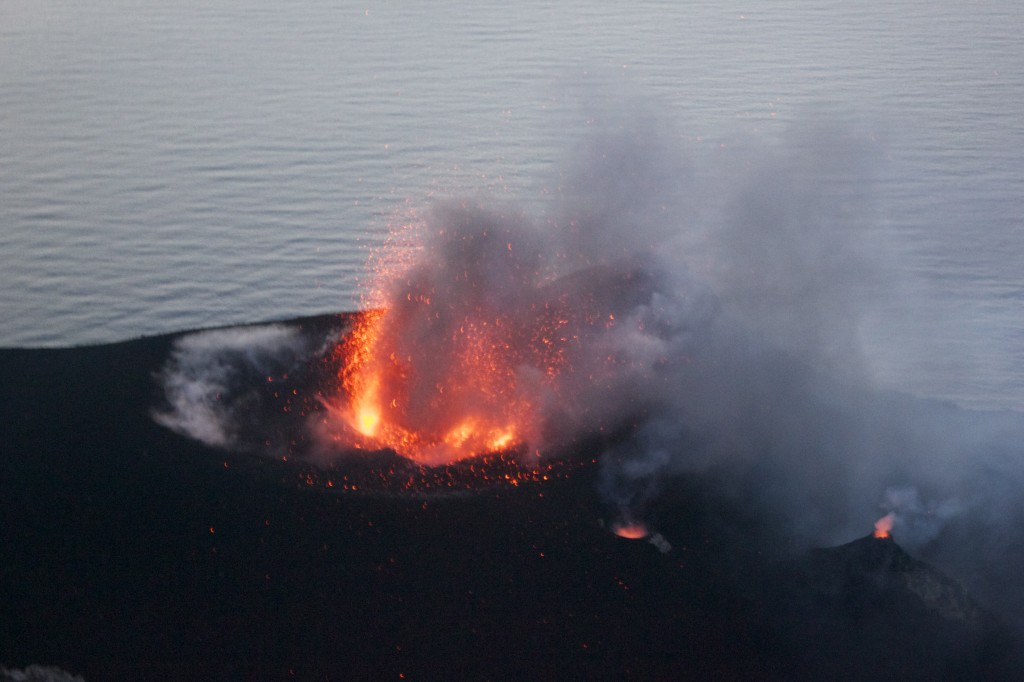