Amatriciana is a quintessential Roman dish. Well, it’s not from Rome, but it is from Lazio (the region Rome is in).  It’s a dish that deserves a post of its own. In short, it’s a tomato sauce with bacon and cheese. Yeah. That just happened.

Anyways, after running around to exchange boyfriend shoes and buy special (read: expensive) cat food for a sick kitty, I was getting home too late to contemplate cooking anything for lunch myself.  Like I said, it’s been a rough week.

So, here’s where you cue a detour into any of the ubiquitous pizza al taglio shops that dot Rome.  Pizza al taglio is pizza sold by weight.  You indicate how much you want via facial expression, hand gestures, and the occasional “più” (more) or “meno” (less).

When I got there at 3 pm on a Saturday, there were huge sheets of different flavors, except for this lone saucy looking little piece: 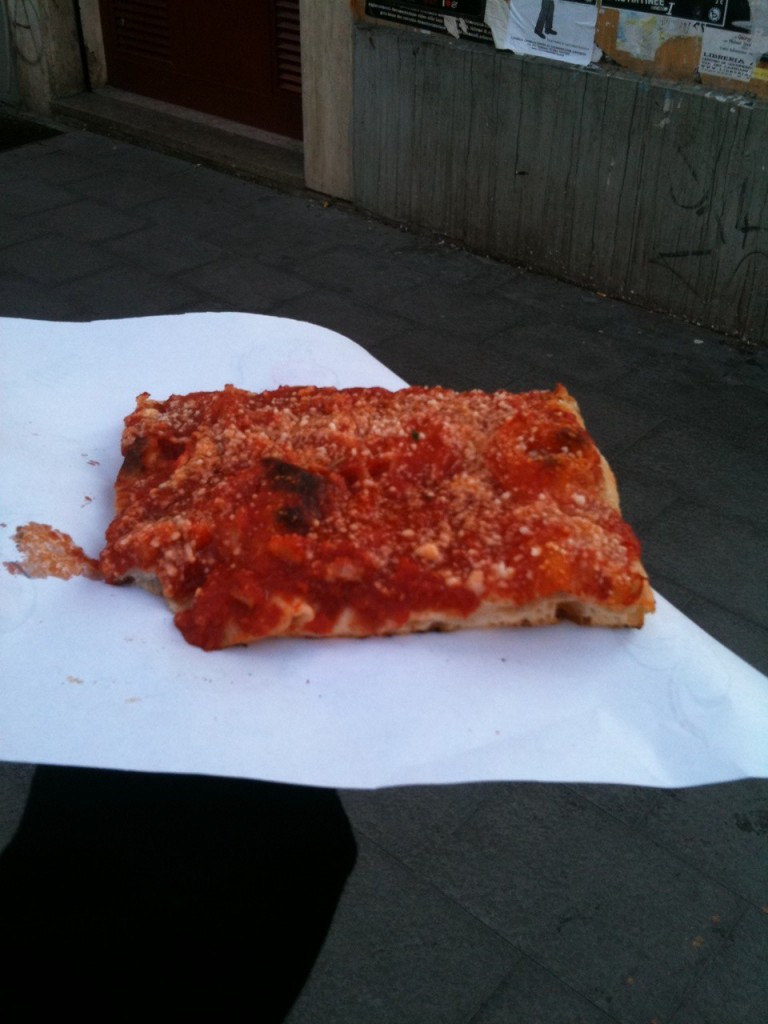 This is where my brain did a couple of cartwheels trying to process bacon sauce + pizza.  I’ve tried cacio e pepe pizza before, which is also based on a Roman pasta dish, but I had never heard of amatriciana pizza!

I bought all that was left. Salty, salty goodness.

This is from Super Pizza at Via dei Volsci, 67, which is nothing special but consistently acceptable and highly unlikely to have amatriciana pizza on a regular basis. (Sorry).

Correction: They do have Amatriciana quite often- lucky you! Thanks to Dario, for correcting my blatantly wrong generalization, and suggesting the cacio e pepe supplì.