Italy is so full of natural wonders that it is hard to know where to begin. Even after more than a decade of living in Rome, I feel like I am barely beginning to scratch the surface of things to see. However, the white, undulating Scala dei Turchi has been at the top of my must-visit list ever since I first saw a picture of the rocky beach formation several years ago.

The chance to visit the Scala dei Turchi finally came when we were in Agrigento. After an early morning visit to the Valley of the Temples, we drove towards Realmonte and Porto Empedocle to see the Sicilian seaside attraction for ourselves. 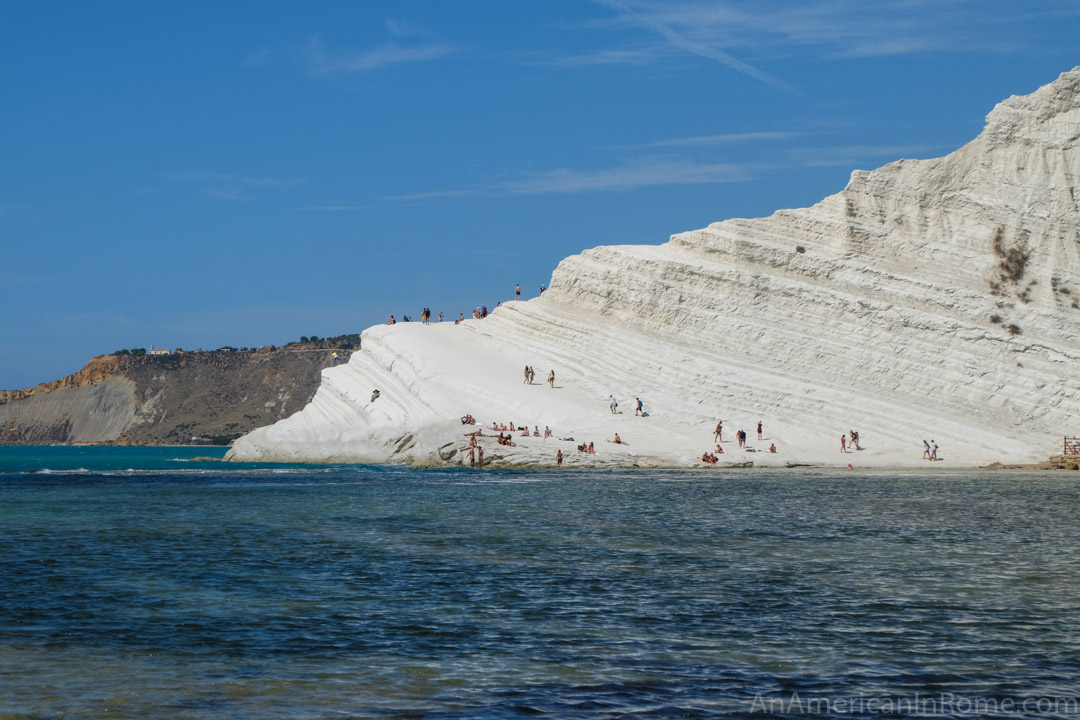 The Scala dei Turchi would mean something along the lines of the Turkish staircase in English. The name comes from an old rumor that the rock formation provided a natural harbor for invading Arab forces centuries ago. (If you don’t know about the history of Arab influence in Sicily, I highly recommend the book Sicily: A short history from the Ancient Greeks to Casa Nostra by John Julius Norwich). 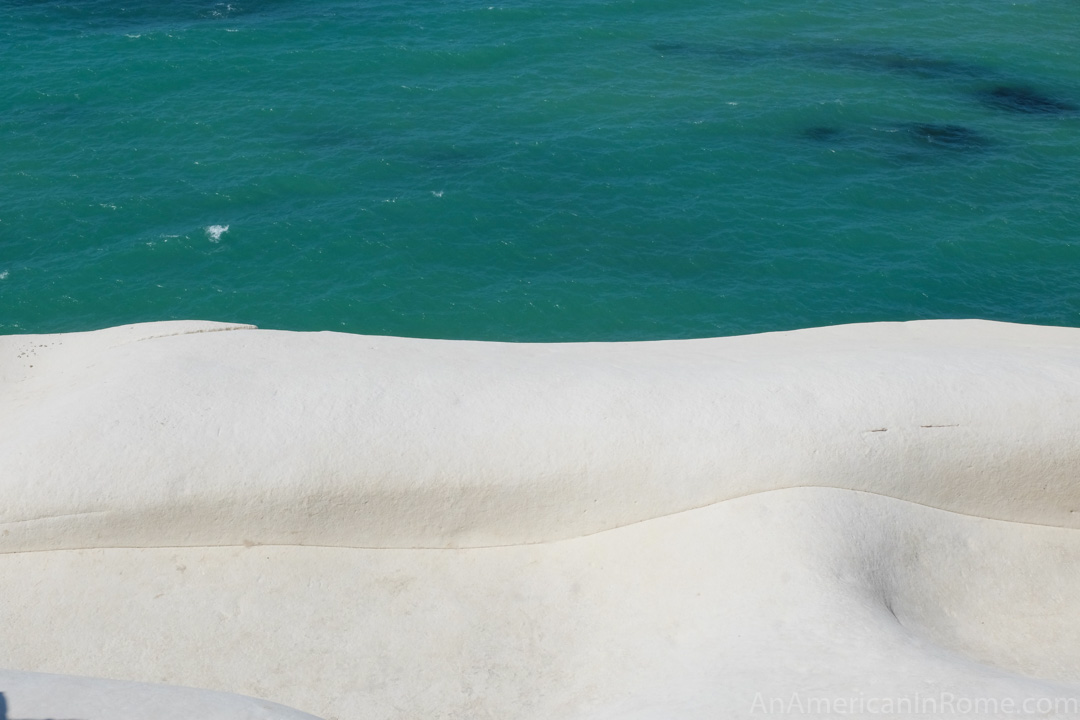 However, the name is secondary because the “stairs” themselves are absolutely beautiful. The Sicilian sun turns the limestone and marl into a blindingly white landmark. The stone, which has been weathered away by wind and surf into naturally occurring layers and shelves, is made to look even starker by the impossible blueness of the sea.

The combination of white rock and turquoise water is mesmerizing. 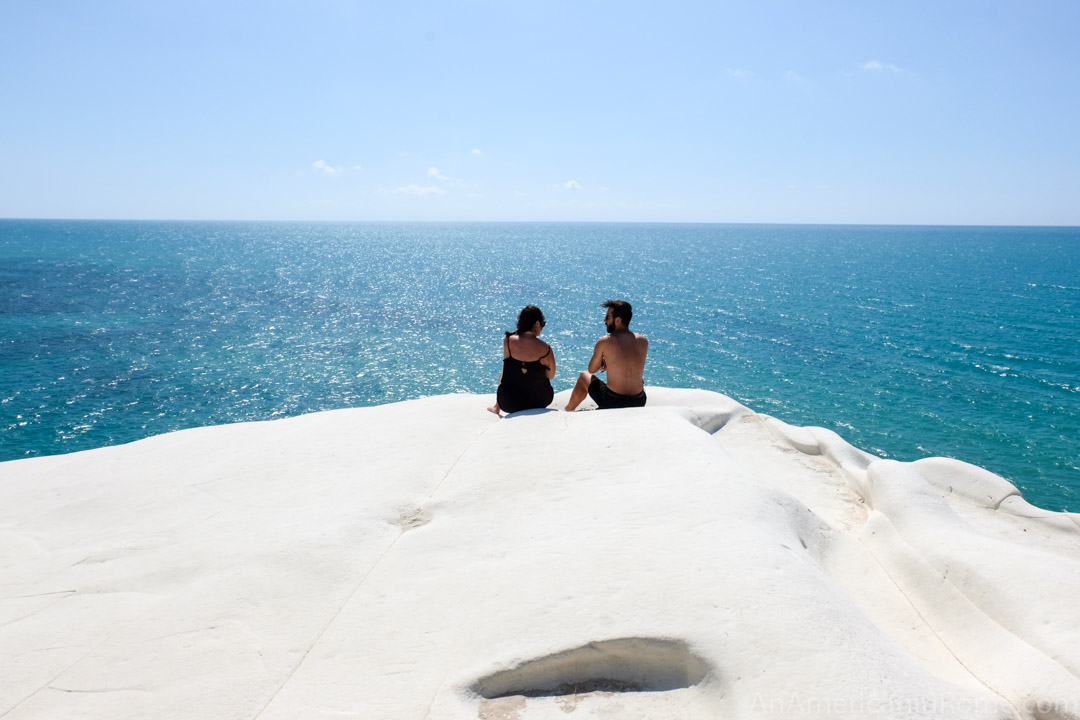 The Scala dei Turchi is a popular place for sunbathing because it is completely free to set up here for the day. Due to the color of the rock and the sea breeze, it stays relatively cool. However, you should be mindful of the sun because there is no shade to be found.

You probably want to be wearing shoes while you climb the rocks as well. There is a steep but easy to navigate natural ramp that leads up to a wide ledge. Most people stop along the way to lay out their towels. However, those who are more daring climb the smaller ledges for more private spots in the sun.

An advantage of staying lower down on the Scala dei Turchi is the ability to quickly and safely jump into the water. Just be mindful of slipping when the rocks get wet. 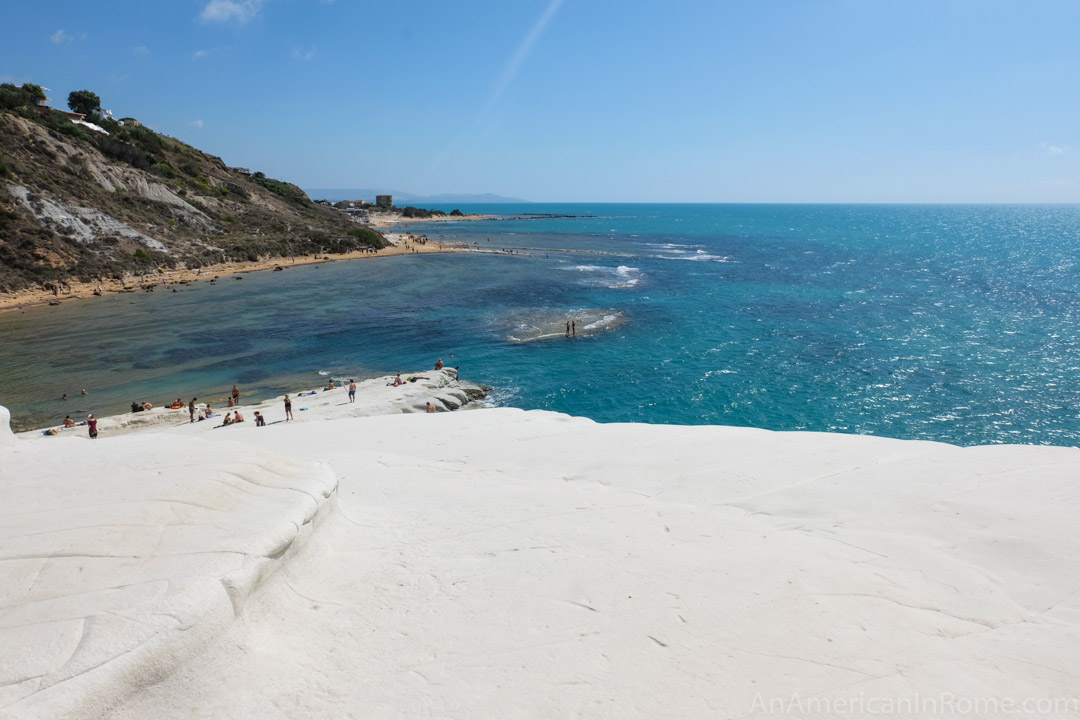 Services are all private but there are at least two beach clubs within a 10-minute walk where you can buy food and drink, rent a seat with an umbrella for the day, and use the toilets.

Going down was a bit scarier than going up, but it was all worth it for the views. 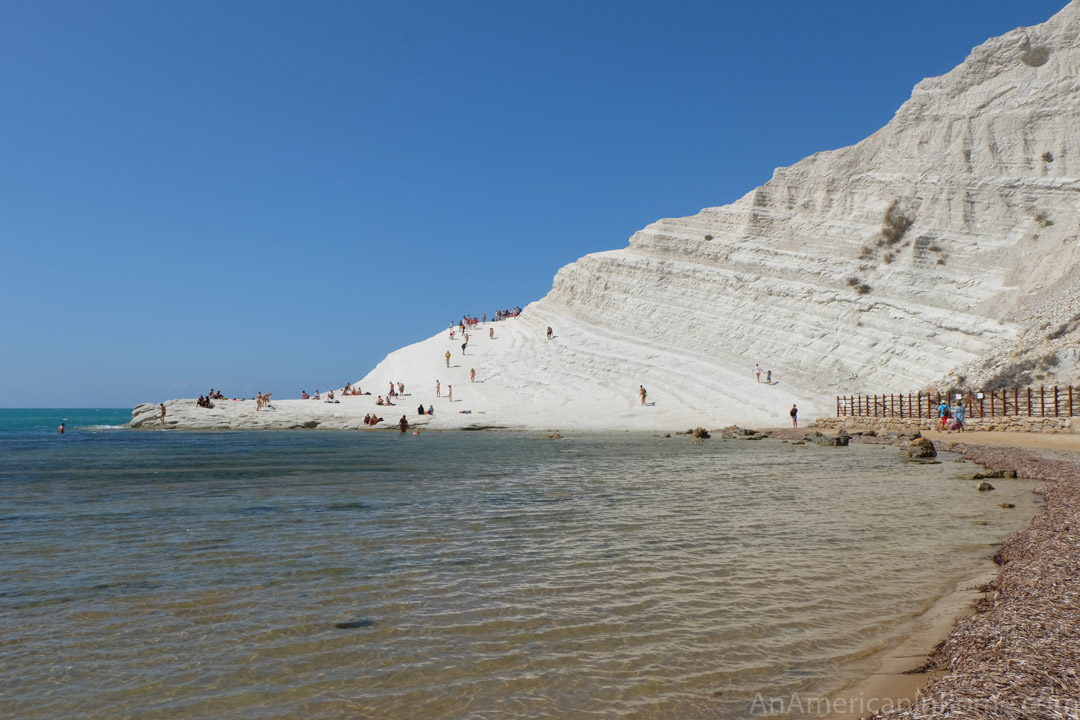 Getting to the Scala dei Turchi

The easiest way to reach the Scala dei Turchi is by car. There are some seasonal summer buses from nearby towns, but tracking down the schedules and routes can be complicated. Driving here was fairly straightforward, taking the SS 115 and then switching to local road 68, and following the signs.

Once you approach the beach where the Scala dei Turchi is located, you will see several private parking lots. These cost around €10 for the day and are gated and monitored. From there, carefully cross the busy road and chose any of the signposted paths down to the sand.

The descent is quite steep and the paths are maintained by private coffee bars and beach clubs to varying standards. For that reason, you want to have reliable shoes to get down to the beach. (In other words, I would not have been comfortable in mere flip flops given the steep grade and proximity to cliff edges). 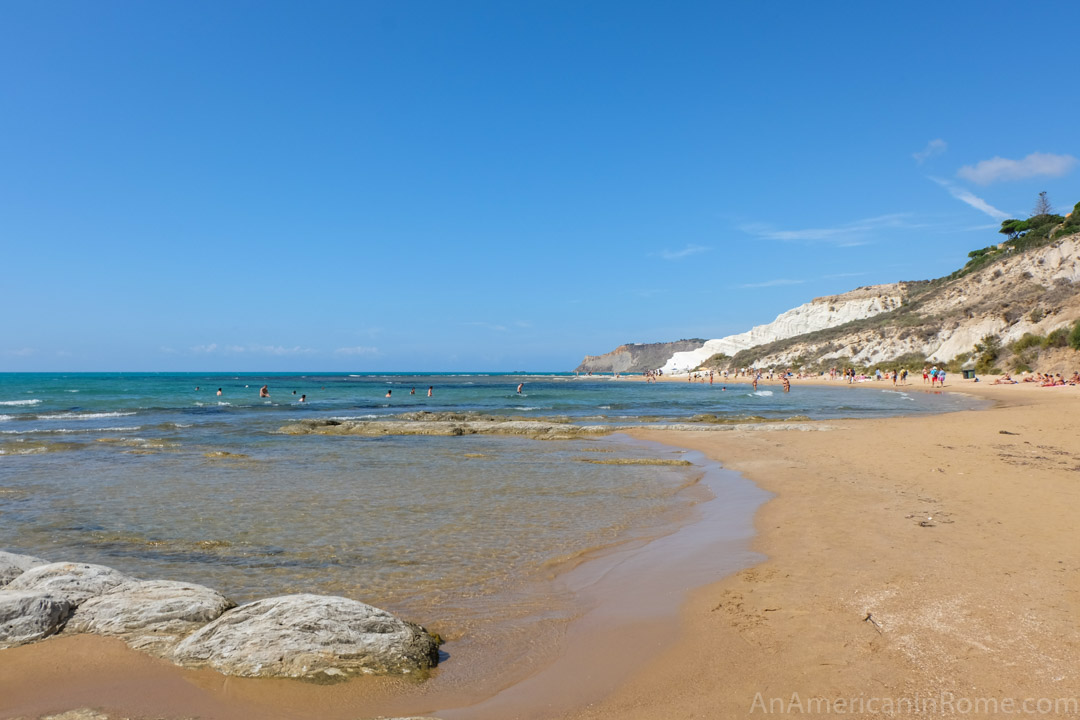 Once you arrive on the sand, look to the right and you will be able to see the white rock of the natural staircase. This took us about 10 minutes to reach while walking along the beach. 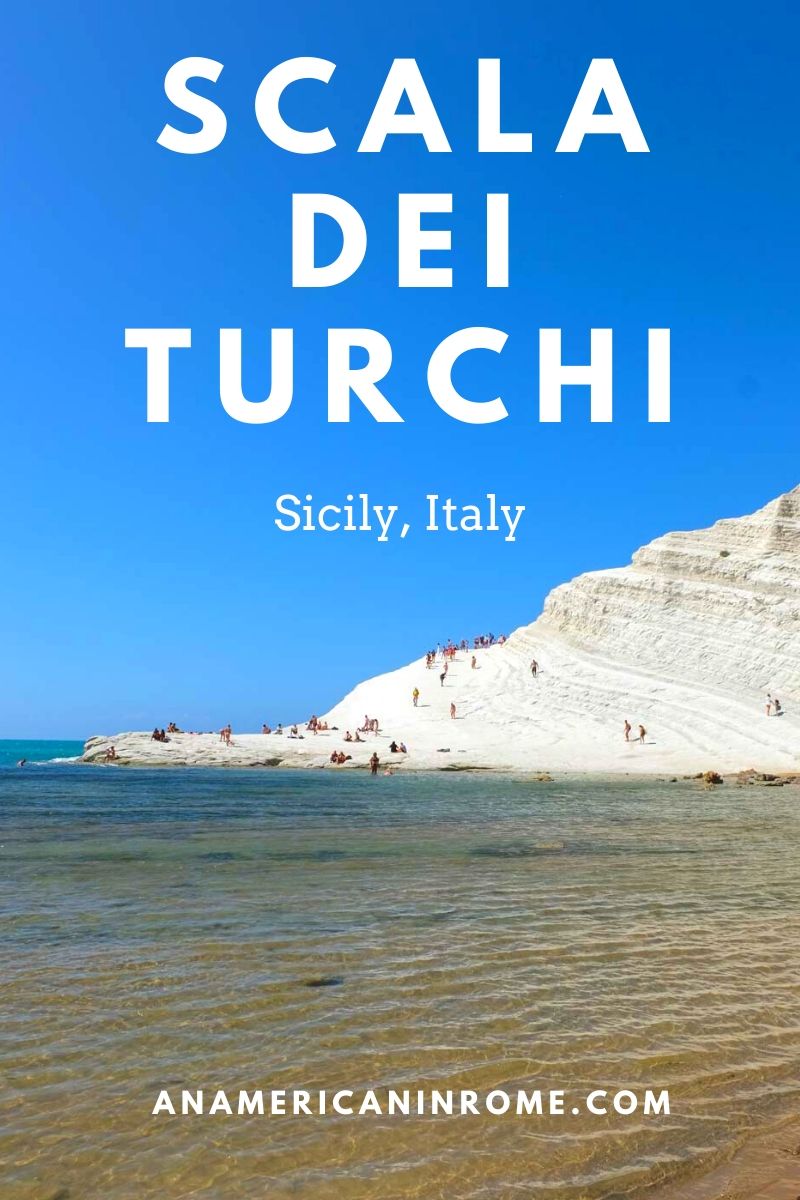 One thought on “The Scala dei Turchi in Sicily”