There is really so much to do in Rome that I sometimes have trouble prioritizing even though I live here. However, I knew that it was ridiculous that I had never been to the top of the Palatine Hill. The Palatine Hill is above the Roman Forum and you can visit with the same ticket you use to enter the Colosseum and the Forum. It offers sweeping views of the ruins and the modern city, and it really is a must see. 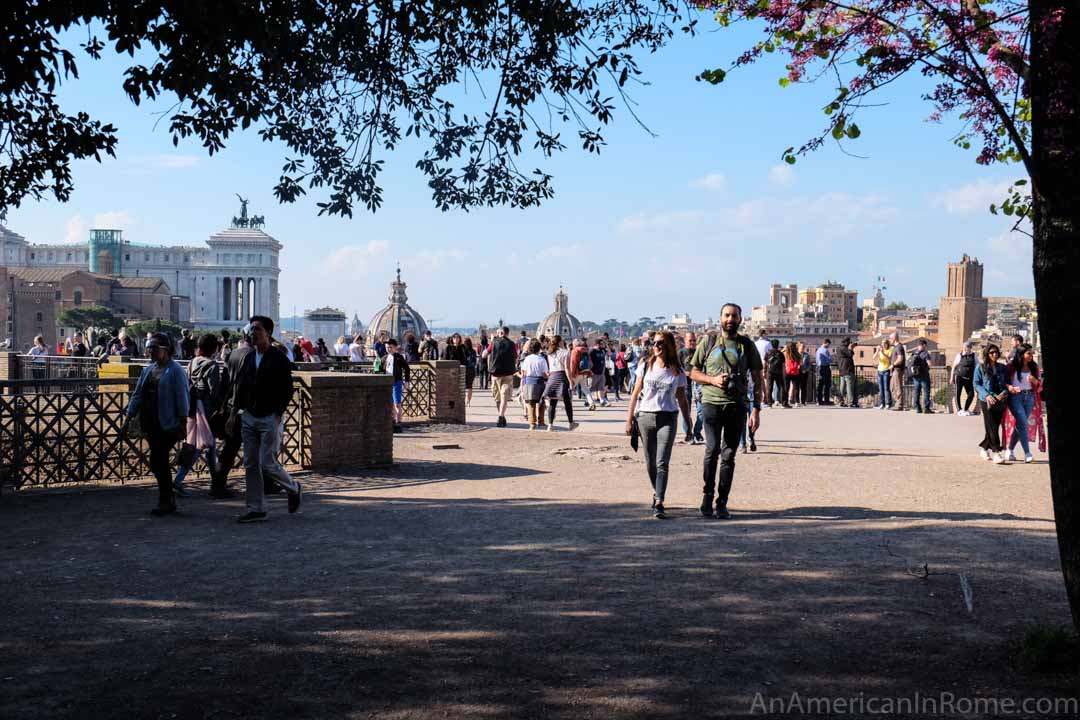 Rome is the city of seven hills but Palatine Hill is the hill. It sits at the center, geographically speaking, but it is also the hill upon which Rome was founded. So we can only celebrate Rome’s birthday, because the she-wolf found Romulus and Remus here – abandoned in a cave known as the Lupercal. 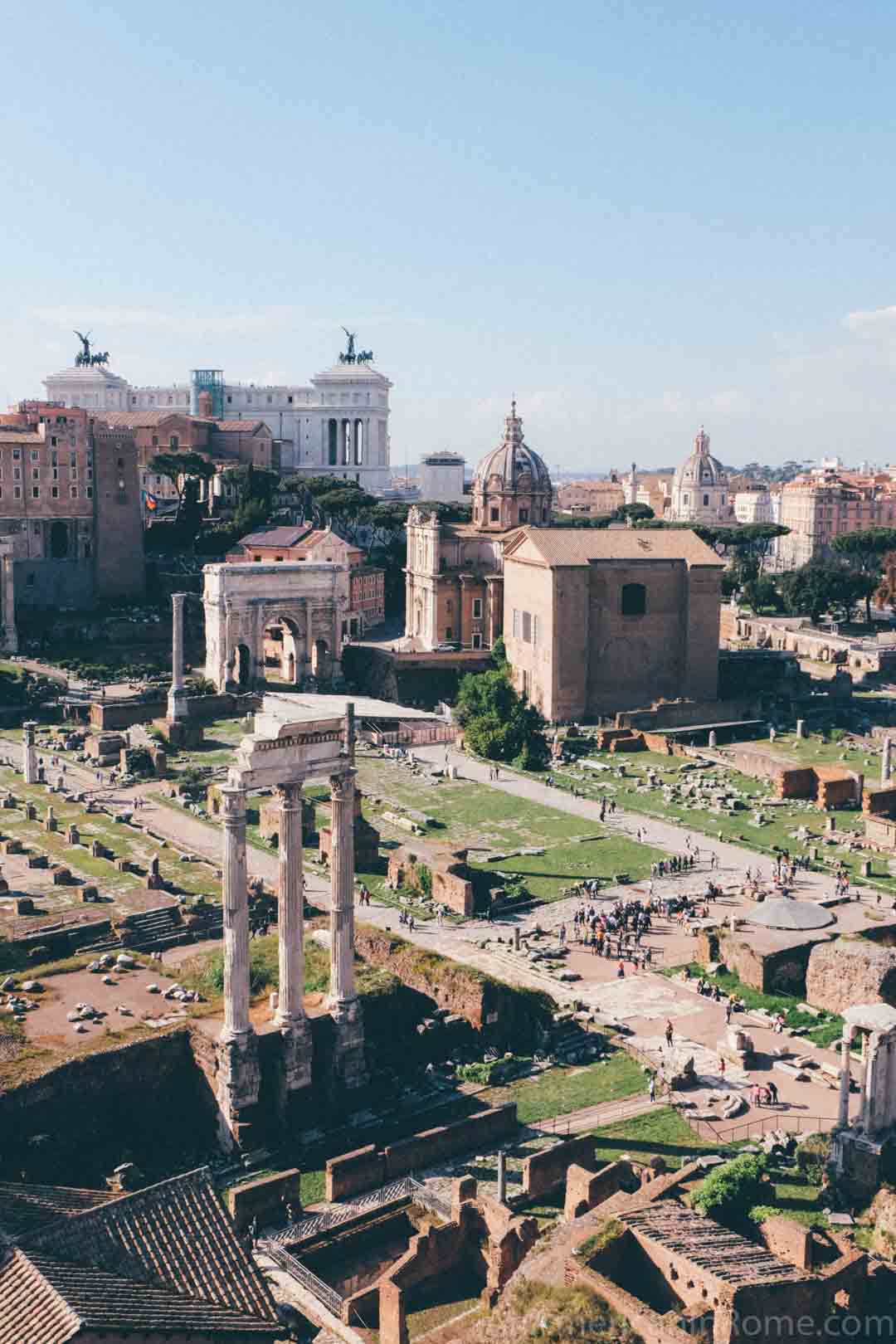 The hill overlooks the Roman Forum to one side and Circo Massimo (Circus Maximus) to the other.

The ruins that you see now atop the hill are mainly a part of the Palace of Domitian, which was itself built atop Nero’s Palace.

In fact, we get the word “palace” from the same Latin word which gave the Palatine Hill its name.

This hill was where the emperor’s liked to build their palaces during the Imperial period and it is still pretty easy to see why once you climb to the terrace. The views are spectacular. 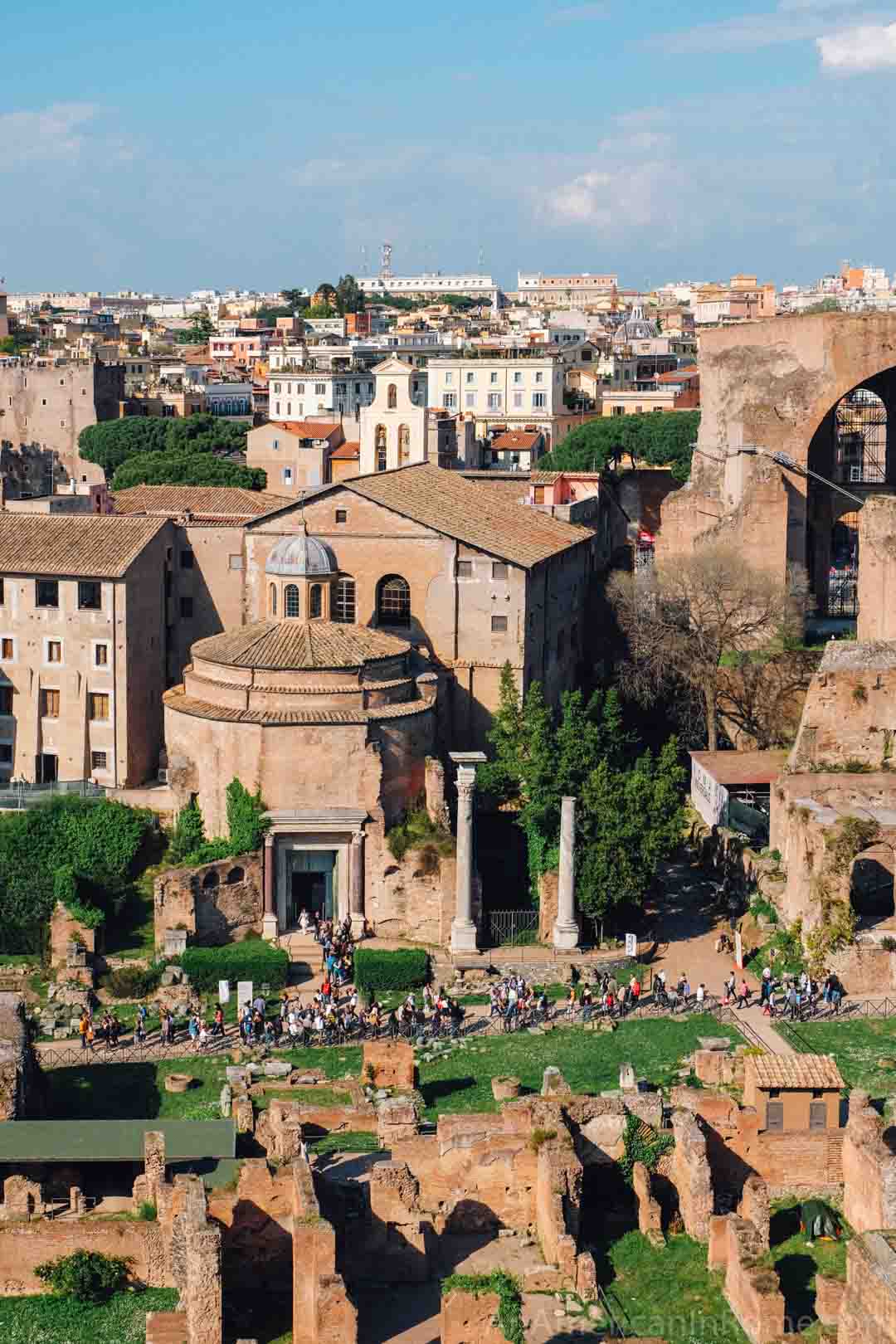 You can reach the Palatine Hill either from the Forum or from its own dedicated entrance on Via di San Gregorio (which is usually a good place to go in if you don’t already have a ticket because the line is often shorter).

The walk up is fairly leisurely but there is certainly an incline, but as you move up away from the Forum the setting becomes quieter. In fact, before you arrive at the popular terrace, most of the Palatine Hill feels like a secluded park. 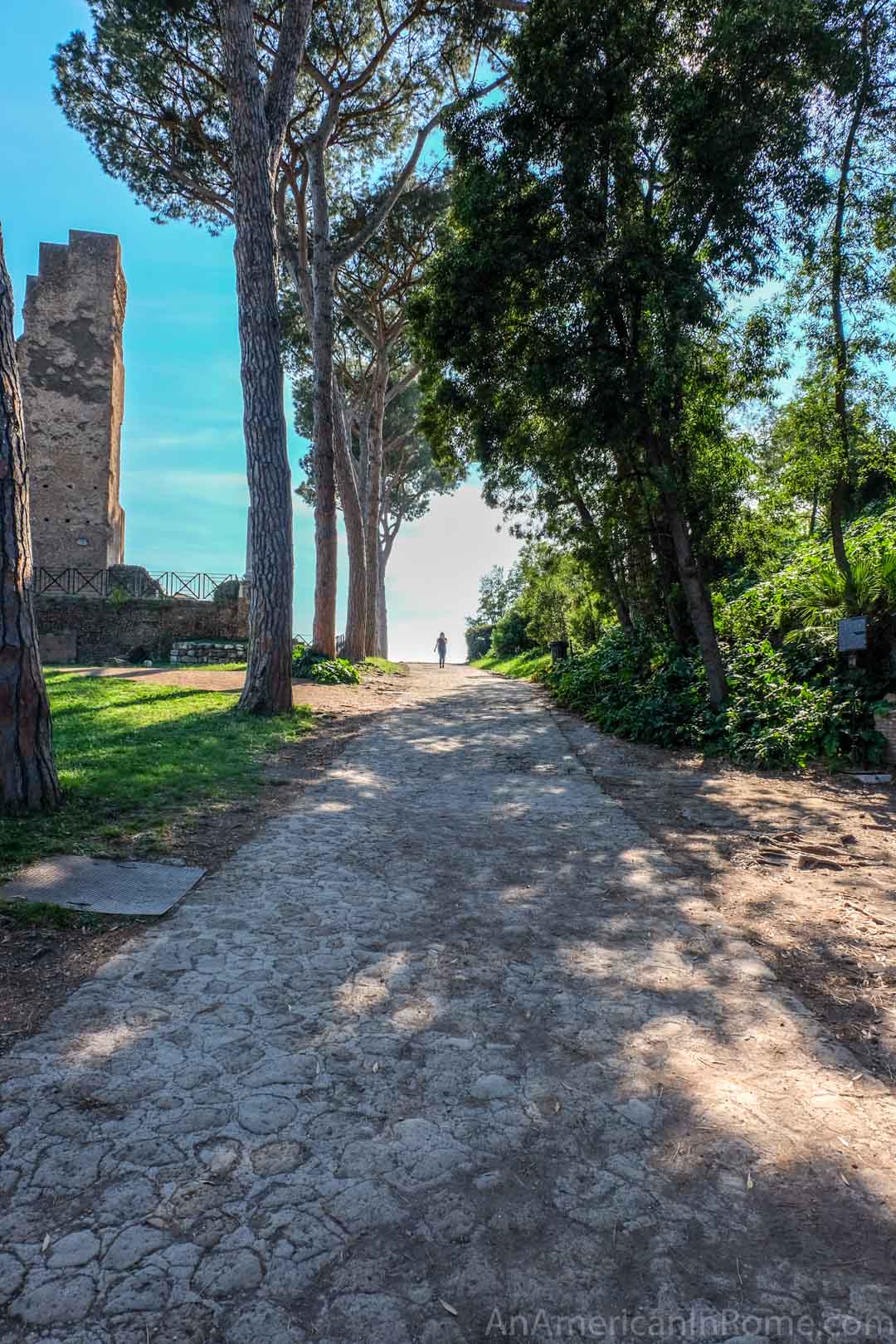 You can visit on your own if you are mainly after the view – it is easy to find your way to the top once you are in the Forum. However, if you are interested in learning more about the history of the Palatine Hill, you can also take a tour which specifically includes it as a stop. Most tours will walk through the Roman Forum, but not all climb up the hill. 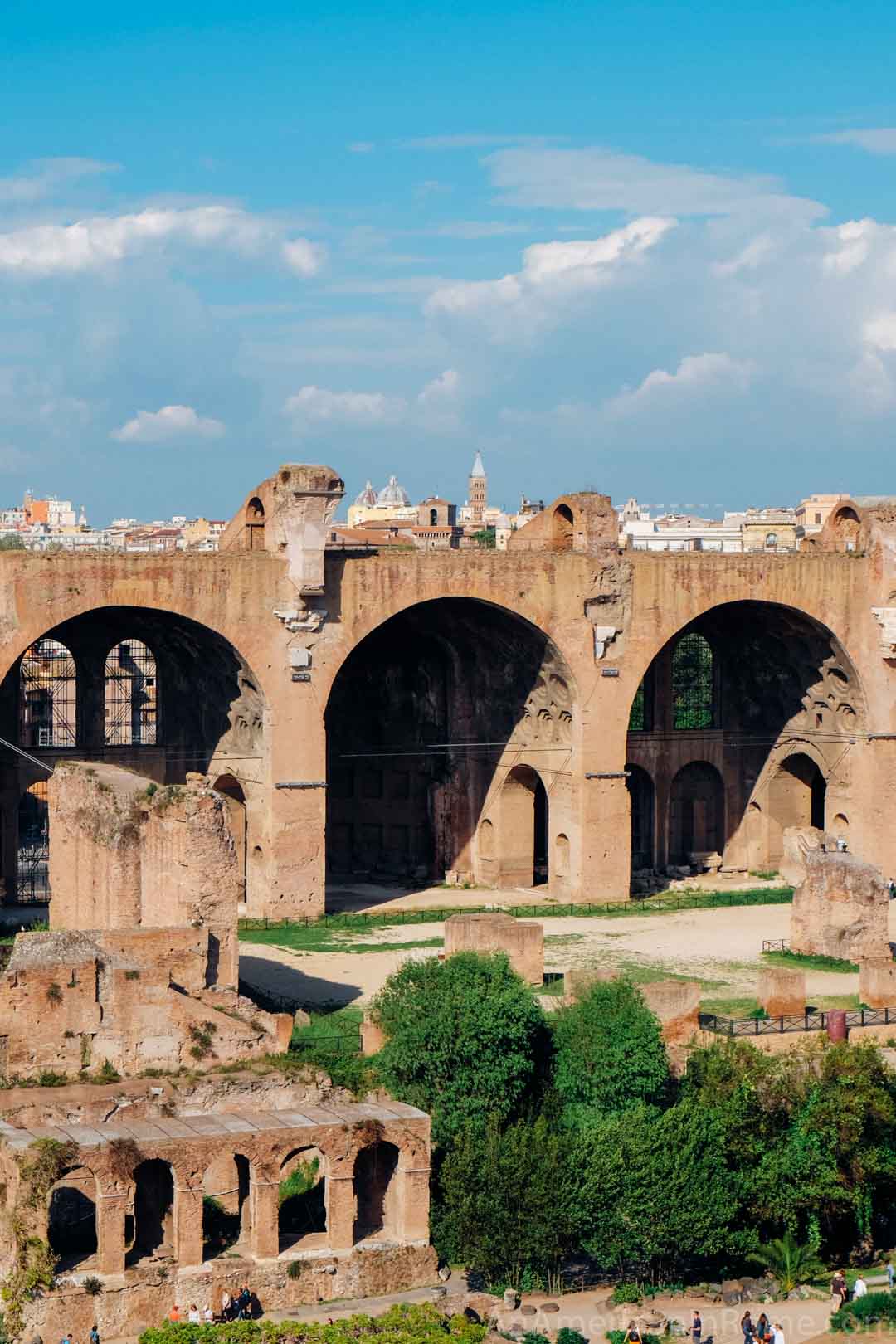 But to really see everything on the Palatine Hill, you need to purchase the recently released S.U.P.E.R. Ticket. The SUPER ticket works for the Colosseum, Forum and Palatine, but also grants you special access to some of the more important archaeological sites hidden away within these major attractions.

For the Palatine Hill, the SUPER ticket allows you to visit the House of Augustus and the House of Livia.  The remains of these houses – which belonged to the emperor Augustus and his wife Livia – have some of the best preserved ancient Roman frescoes in the entire city. They are a bit of a hidden gem and offer a unique glimpse into the past which you can’t find at the more popular Colosseum next door.

In any case, don’t make the mistake I did by leaving the Palatine Hill off your Rome To Do List. It is truly a beautiful part of the most ancient area of the city. 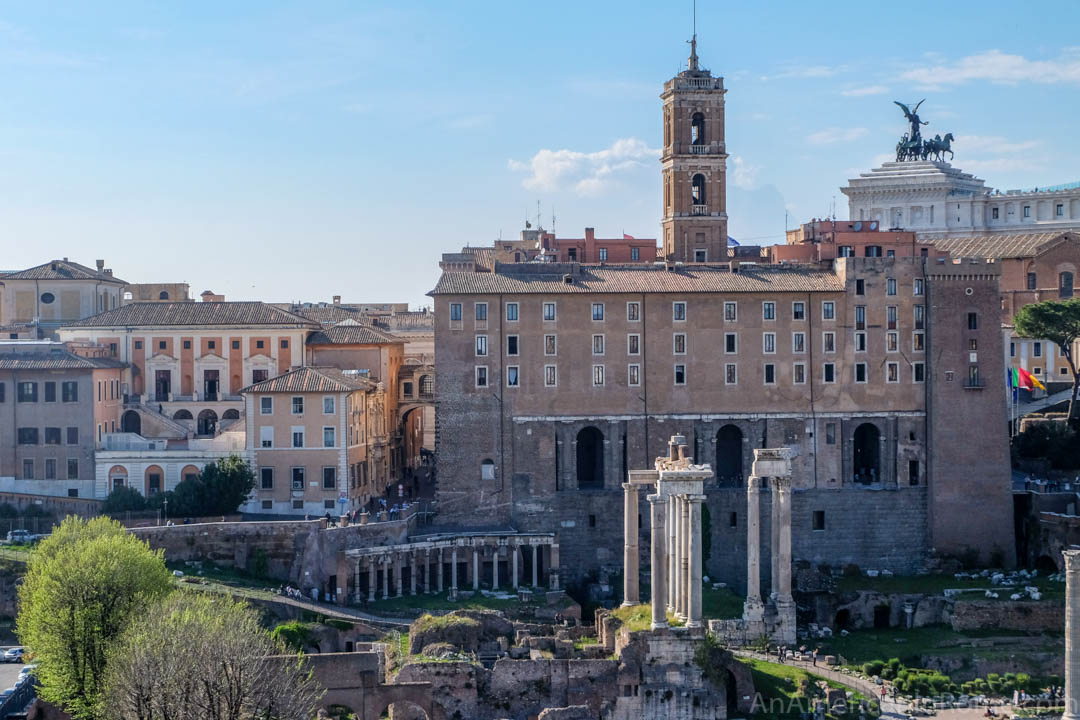 Note: This post may include affiliate links for services which I personally recommend. Should you choose to book through these links, I may receive a commission.

6 thoughts on “Visiting the Palatine Hill in Rome”