On the train back to Rome, we were covered in orange juice.

It had soaked our jeans and it was in our shoes.

We were still processing what exactly had just happened.

We survived our first Carnevale d’Ivrea. 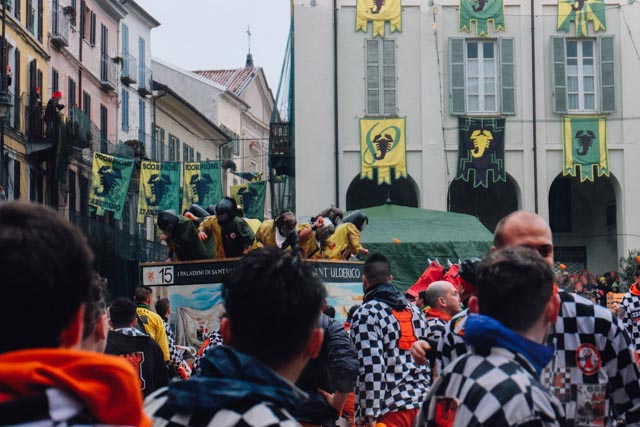 The plan came into being rather quickly and it started with a link. Five crazy Italian festivals nobody should miss.

“Oh, sure. This will just be the Palio in Siena and Florentine football,” I thought.

I clicked it anyways, and smugly realized that I was right. Calcio storico and horse racing were there, but so was the orange battle of Ivrea.

A huge food fight, where the entire town battles it out with citrus. 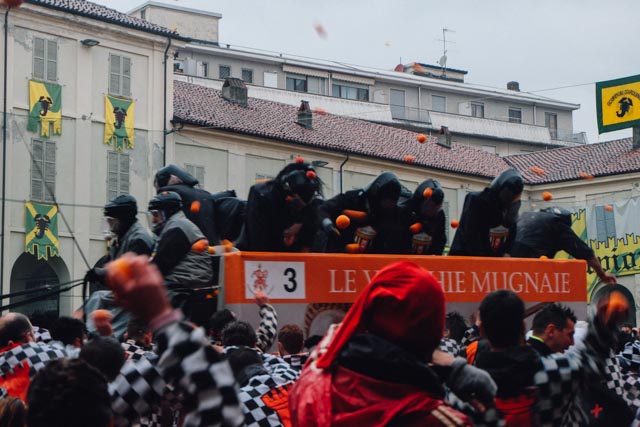 How have I never heard of this??!

Some googling later, realized that the 2016 edition was taking place in 6 days time. 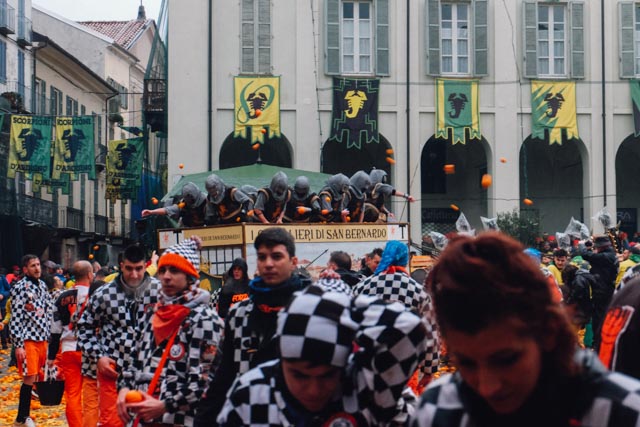 We arrived in Ivrea at 10:30 am, via a packed regional train from Torino.

It was cold and raining.  I eyed the unflattering red stocking caps warily, hoping they would provide at least a bit of warmth, before reluctantly handing over my €5 to buy one.

The hats are worn to signify you are a bystander, so please do not hurl oranges at me with too much force, thankyouverymuch.

These Phrygian Hats are also a symbol of freedom, and signify your full support of the event, so knuckle down and get one. 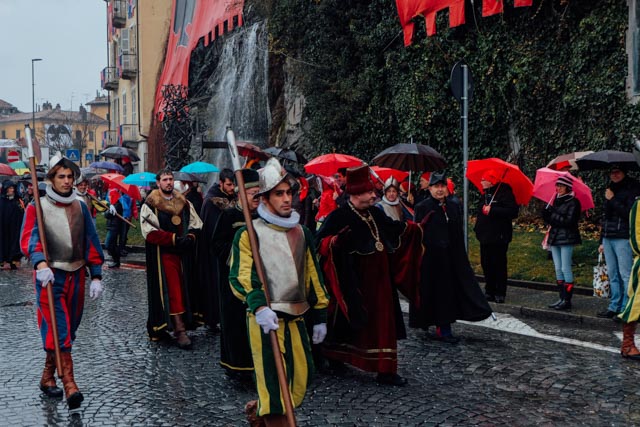 In spite of the rain, a parade was starting as we arrived.

Unfortunately, the drizzling weather took away a bit from the costumed, carnevale fun. 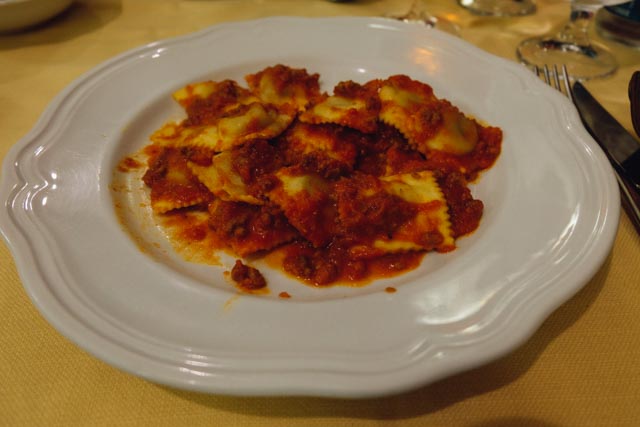 As the parade made its way to the main piazza, we thought of lunch.

We warmed up and composed ourselves for battle with delicious agnolotti at La Lucciola. 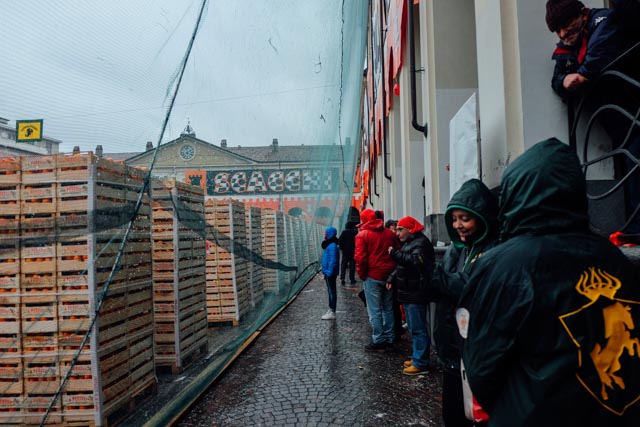 The restaurant cleared quickly as everyone headed back into the streets to prep for the main event.

By the time we finished our meal, the mood had shifted and it was clear that the battle was about to begin.

Getting a bit nervous, I stationed myself behind green nets that had been strung up in many locations to protect the buildings and the spectators alike. 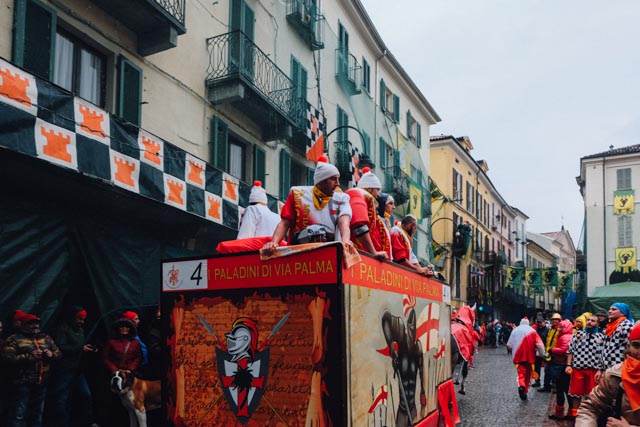 The first teams began to roll through town to take their positions. 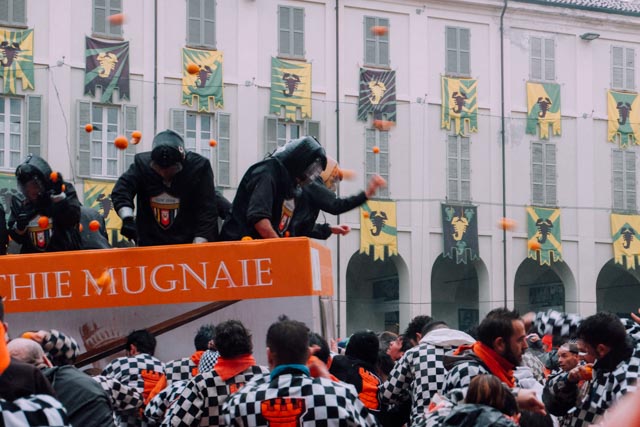 And then all hell broke loose. 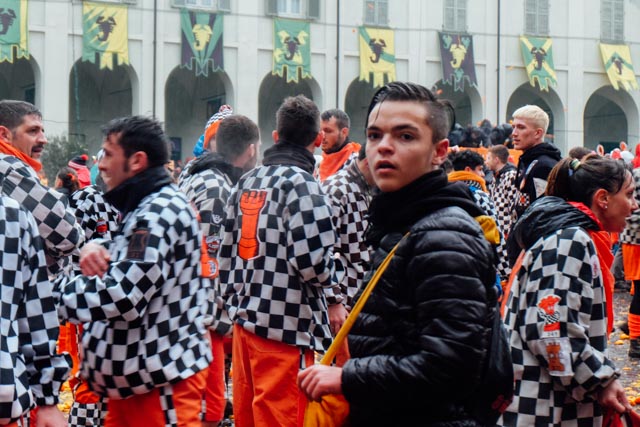 There were only a few minutes between each ‘attacking’ team to catch your breath.

I gave up the relative safety of the netting, hoping for the best. 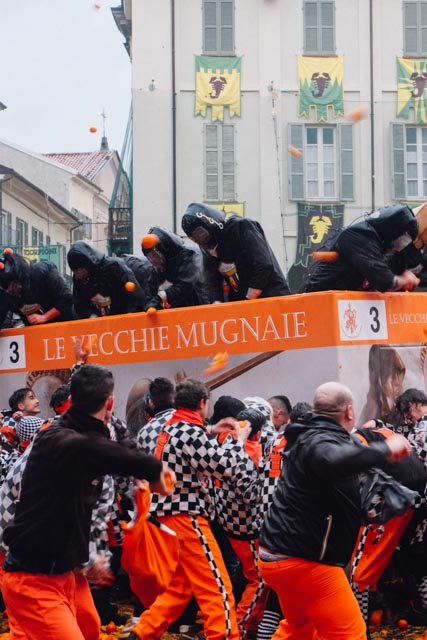 The attacking team arrives in a horse drawn cart, with masks on.

The team defending the piazza from the ground swarms quickly. 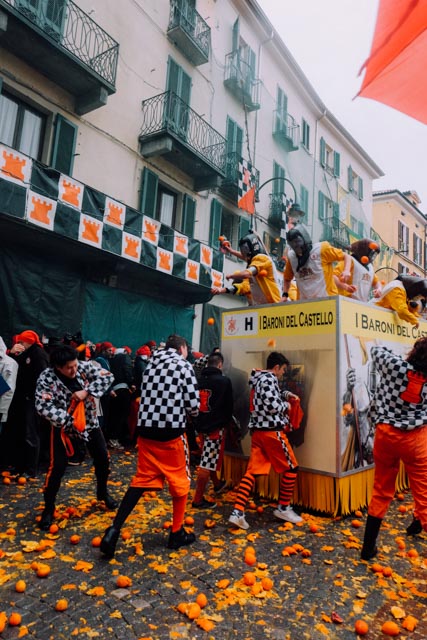 A key strategy seems to be for the ground players to get as close to the cart as possible, under the shield of friendly fire from other team members, to try to hit the attacking team at close range.

That means putting yourself in close range too. 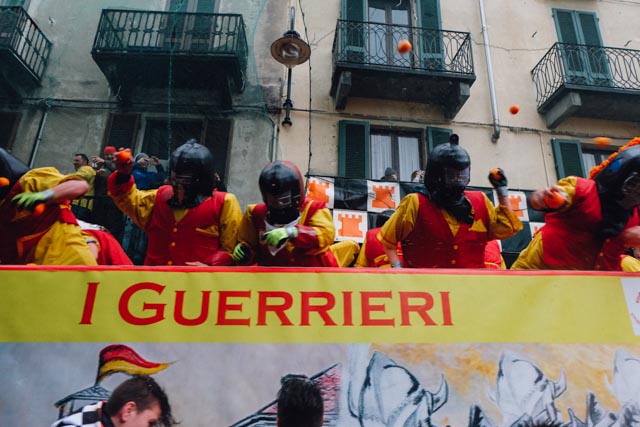 Many of the participants wear padding, to avoid serious injury of speeding oranges hurled on a cold day. 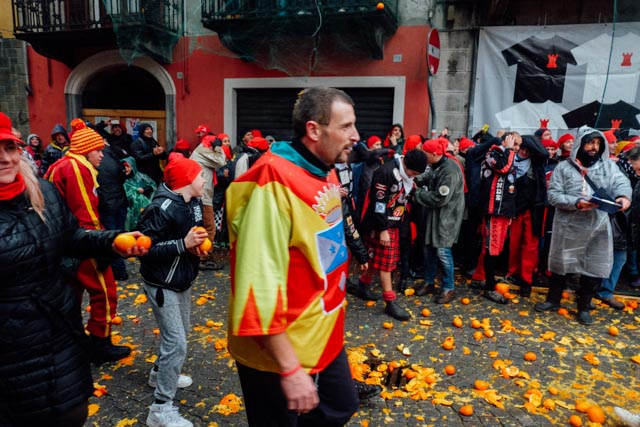 Others? Well. They take the opposite approach: 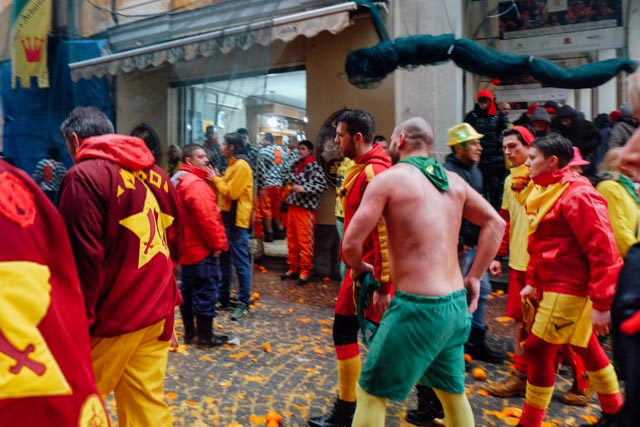 How did such a dangerous tradition take root? 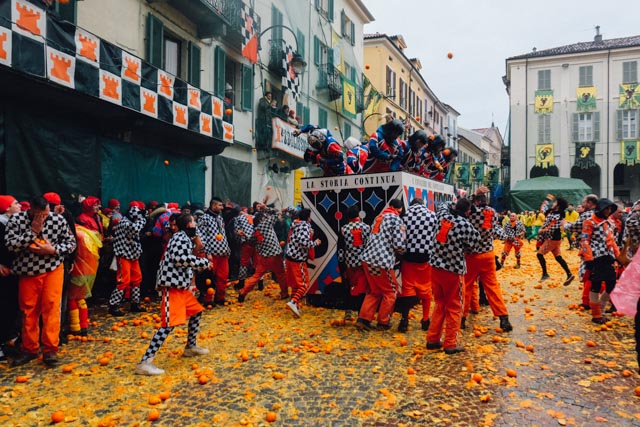 Legend has it that this battaglia delle arance all began thanks to the daughter of a miller who lived in medieval Ivrea.

With the citizens of Ivrea starving at the hand’s of the local baron, Violetta had had enough. No way was she going to allow him the “right of the first night” (when medieval lords were given the right to sleep with a bride before her new husband).

The miller’s daughter went up the castle, and beheaded the evil baron. 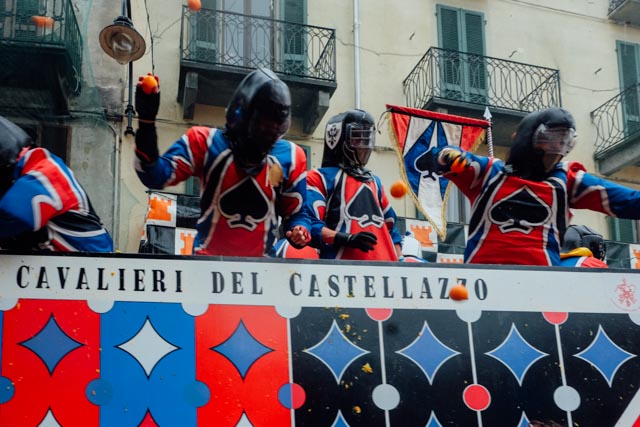 With the baron dead, she called on the oppressed people of the town to revolt.

They tore down the castle that night and it was never rebuilt.

The Orange Battle is a recreation of that revolt. 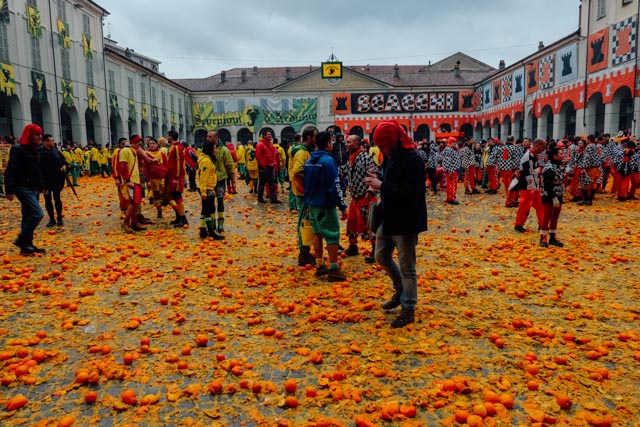 However, oranges have only been thrown since the 1950s.  Before then it was beans and candied almonds.

The citrus came in when some local girls, wanting to catch the eye of a particular suitor, started lobbing the odd oranges at the boys to get their attention. 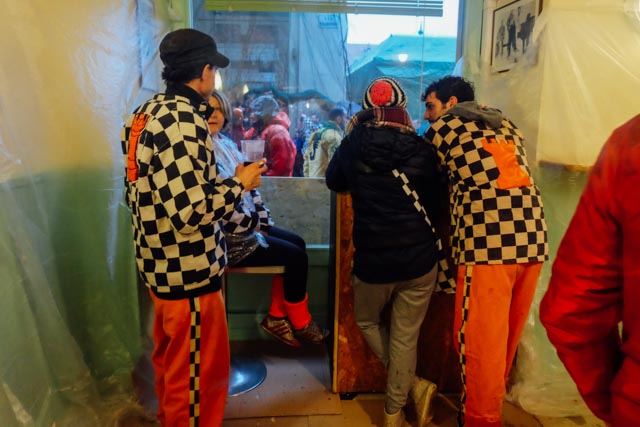 Many of the businesses are smartly closed up behind shutters. The ones that do stay open line their floors with cardboard and cover the walls in plastic sheeting to minimize the juice spray.

They serve mulled wine to keep the battlers going. 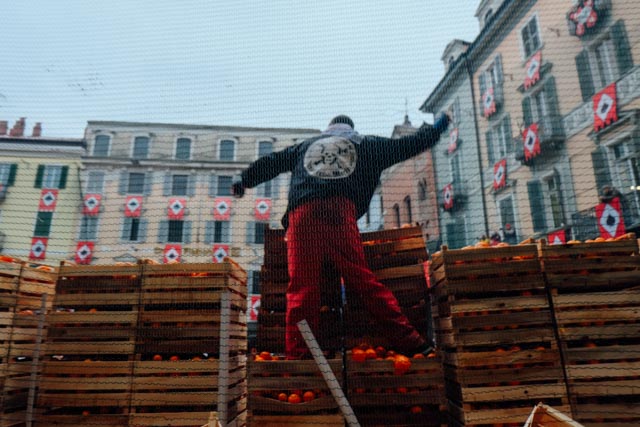 And there are plenty of fighters.

There are over 4000 throwers on foot belonging to nine teams. Additionally, there are 50 horse-drawn carts filled with 10-12 throwers each. 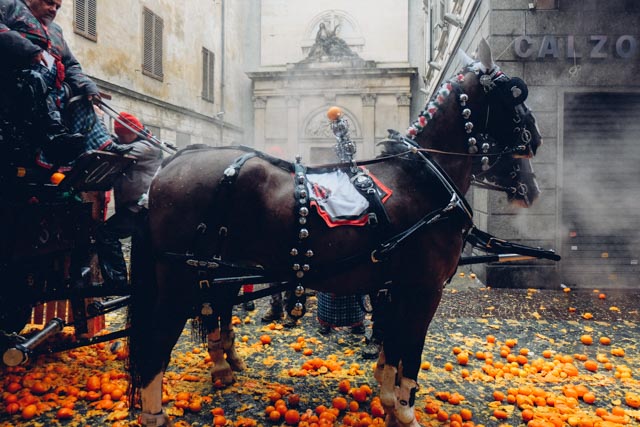 Actually, I did feel a little bad for those horses. 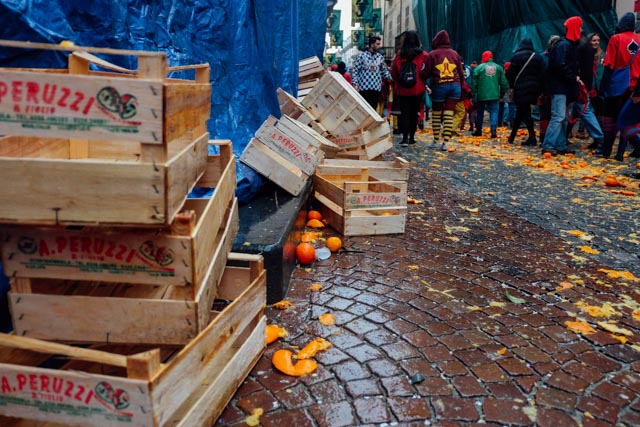 Crates of oranges line the streets. 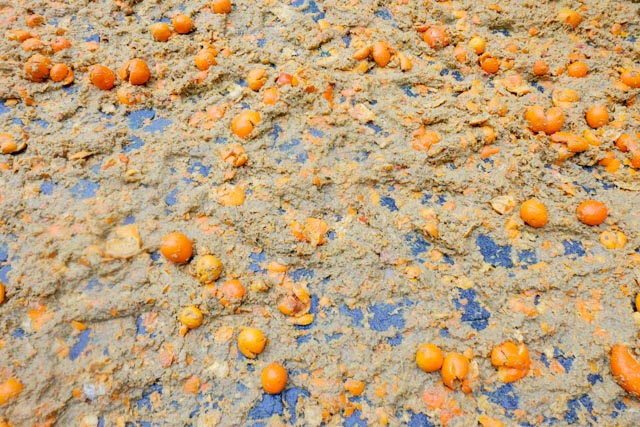 And 1000’s of tons of Calabrian oranges later carpet the streets. 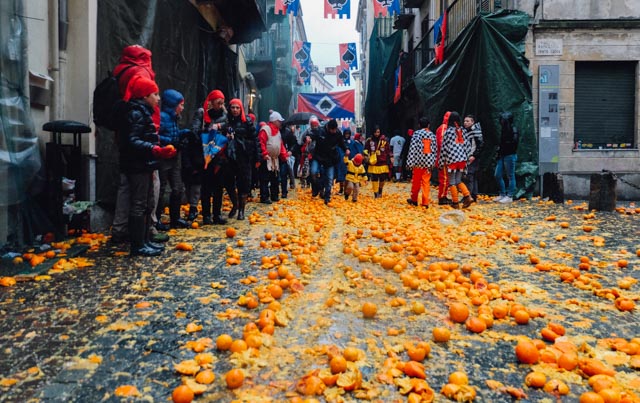 It was truly a sight to be seen. 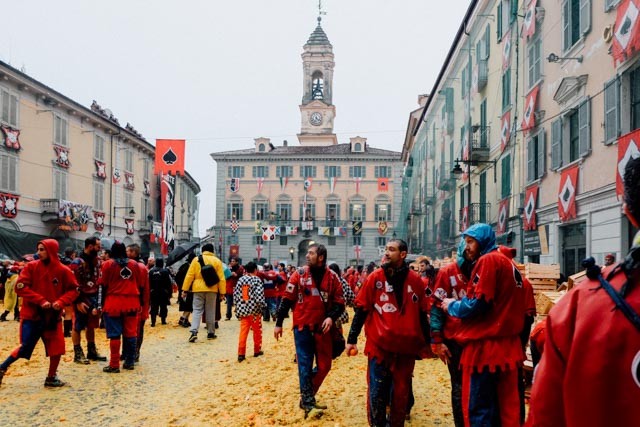 Only 70 people were hurt in the battle this year. We were happy to escape with no more than a juicy drenching.

If you want to watch the Orange Battle in Ivrea yourself, here are some tips to keep in mind:

11 thoughts on “Watching the Battle of the Oranges in Ivrea, Italy”