Every December, it takes me a few days to get used to all of the BUON NATALE Christmas signs.  They catch my eye because ‘natale’ (Christmas) looks so similar to my own name. I like to pretend that everyone is posting those holiday signs to tell me I am doing a solid job with life – Great one, Natalie! 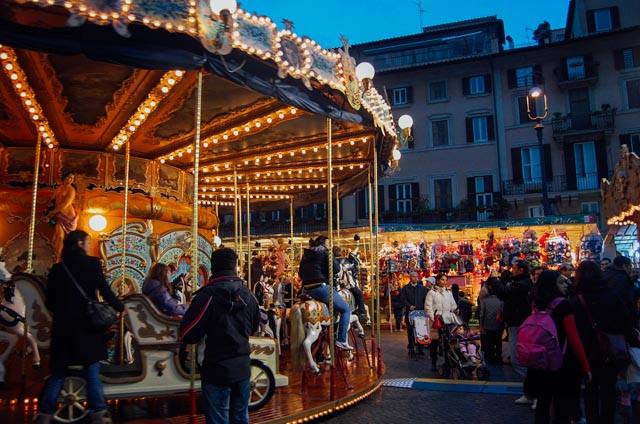 Anyways, December is packed with festive events, especially as Pope Francis has declared 2016 to be a Holy Year.  This jubilee comes 10 years ahead of schedule and will bring many more religious visitors to Rome. It all kicks off on 8 December, but there are tons of other ways to celebrate the holidays in Rome.  As more information on New Years Eve becomes available, I will update this post.

4 December: Not an event to look forward to, but certainly one to plan for – on Friday December 4th, Rome’s transportation company ATAC has called a strike. The strike will impact buses, trams the metro and some local trains from 8:30-12:30. More information at ATAC’s website.

6 December: Potential opening of the Christmas Fair in Piazza Navona. Why potential? Because the fair has been mired in controversy regarding the vendors (and the fact that all the vendors are from the same family!).  The fair is scheduled to run from 6 December 2015 to 6 January 2016.

5-8 December: If the Piazza Navona scene is not your jam, head to the Mercato Monti for the Monti Vintage Market to snag some truly unique Christmas gifts (or stock up on things off your own wish list).  The market runs from 10 am to 8 pm, with extended days during the holiday season.  Find the vendors at Via Leonina 46 on 5-8 December, 12-13 December, and then 19-22 December for those of you who really like to to cut the Christmas shopping close.

5-8 December: If you are totally over shopping and just want to celebrate the holidays with a lotta food and some craft beer, the Food Truck Fest runs from 11 am to 11 pm  Città dell’altra Economia.  Everything from hamburgers to tortelli di zucca will be available from a range of food trucks.

8 December: A public holiday in Italy when many businesses will be closed in observance of the Feast of the Immaculate Conception. This year, December 8th is also the start of the Jubilee year declared by Pope Francis, which will begin with the opening of the Holy Door of St. Peter’s Basilica starting at 9:30 am.  The Jubilee runs through 20 November 2016, and more information can be found at the Vatican’s website dedicated to the Holy Year of Mercy.

13 December: From 11 am to 11 pm, you can drop in on the Natalino Christmas Market at Lanificio159.  Not only can you find handmade goodies, there is also space to release your own creative spirit and get in on the crafting.

18 December: Lighting of the Christmas tree in St. Peter’s Square at 4:30 pm.

31 December: Stave off the holiday kilo creep with a 10K run around Rome on the morning of New Years Eve.  The race has both competitive and non-competitive spots for just a €15 entry fee. We Run Rome 2015 will take you past the Baths of Caracalla and loop through the city all the way to Piazza del Popolo.

Toulouse-Lautrec: Opening on 4 December, 2015, a collection of works created by the French artist between 1891 and 1900 will be on loan from the Museum of Fine Arts in Budapest.  The show is being held at the Museo dell’Ara Pacis, in the nuovo spazio espositivo Ara Pacis.  Tickets are €11 for the exhibit alone, or €17 for the exhibit plus entrance to the Ara Pacis. On through 8 May 2016.