Last year for my birthday, I was given a surprise party, booked a ticket to California, and then scampered off to Ischia.

This year for my birthday, I had a delicious pajama brunch party, booked a ticket to Budapest, and then scampered off the Procida.

Procida and Ischia are Capri’s less famous (and less crowded) sister islands in the bay of Naples. 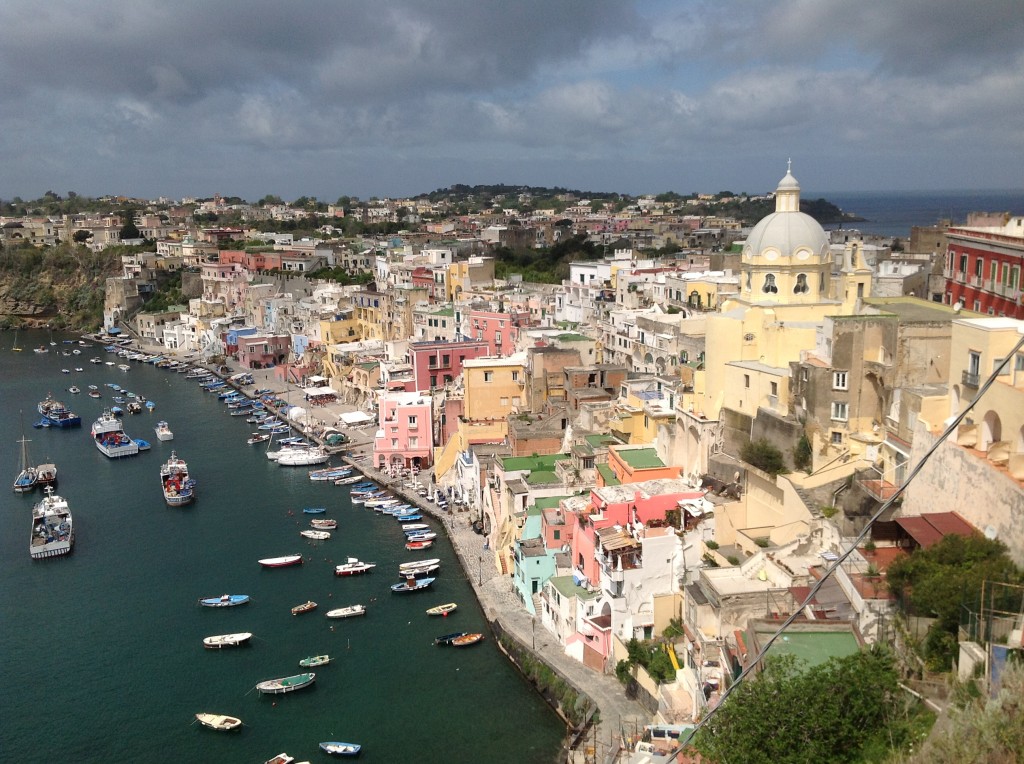 I also managed to work, “Did you know that this is where they filmed Il Postino??” into the conversation about 10 times in 48 hours.

I watched Il Postino in 11th-grade Spanish class (yeah, I know, but the Spanish link is there, trust me). I couldn’t believe the place was real and I was there. 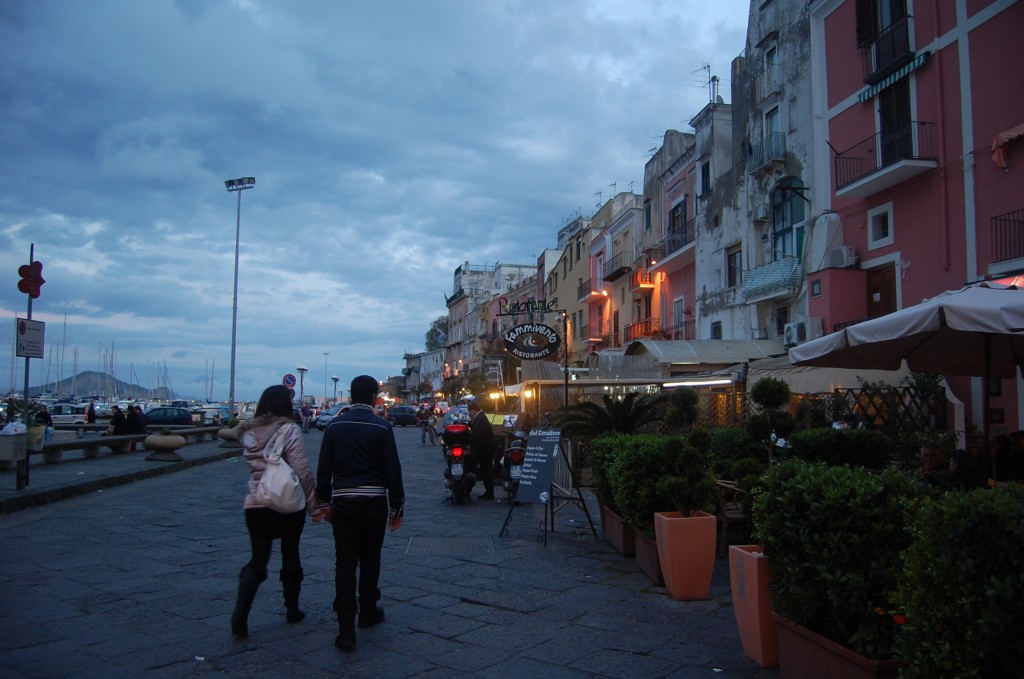 I also managed to mention several times that The Talented Mr. Ripley was also filmed on Procida.  This was admitted to conversation fewer times because I find that movie pretty creepy. 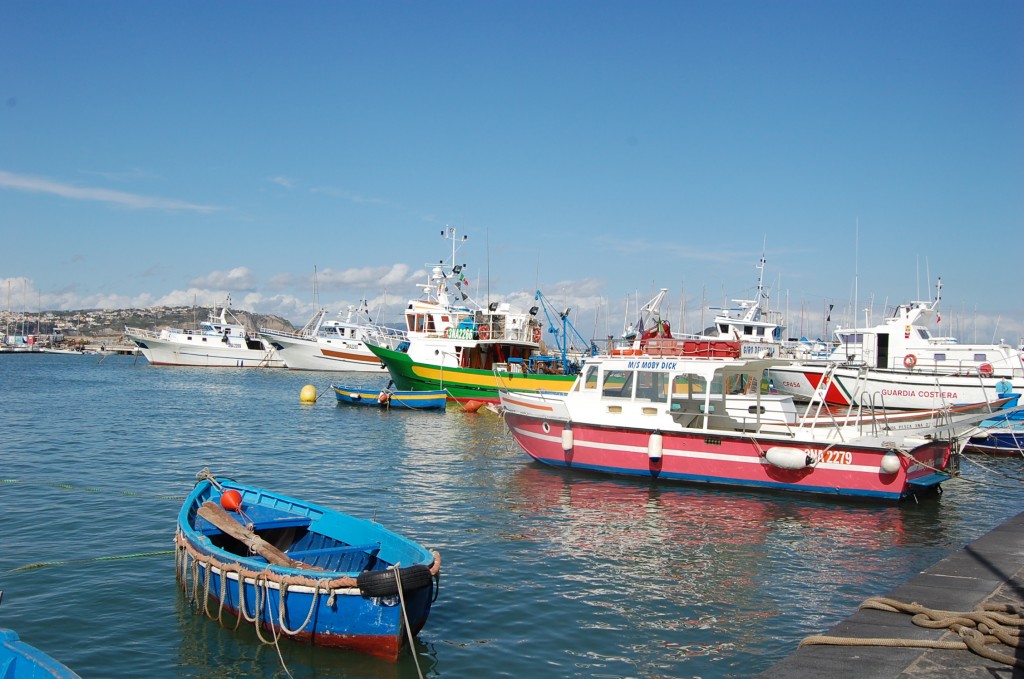 Camera-ready Procida is easy to get to from Naples.  Just hop on a 35-minute ferry (for about 15 euro, depending on the time/company) 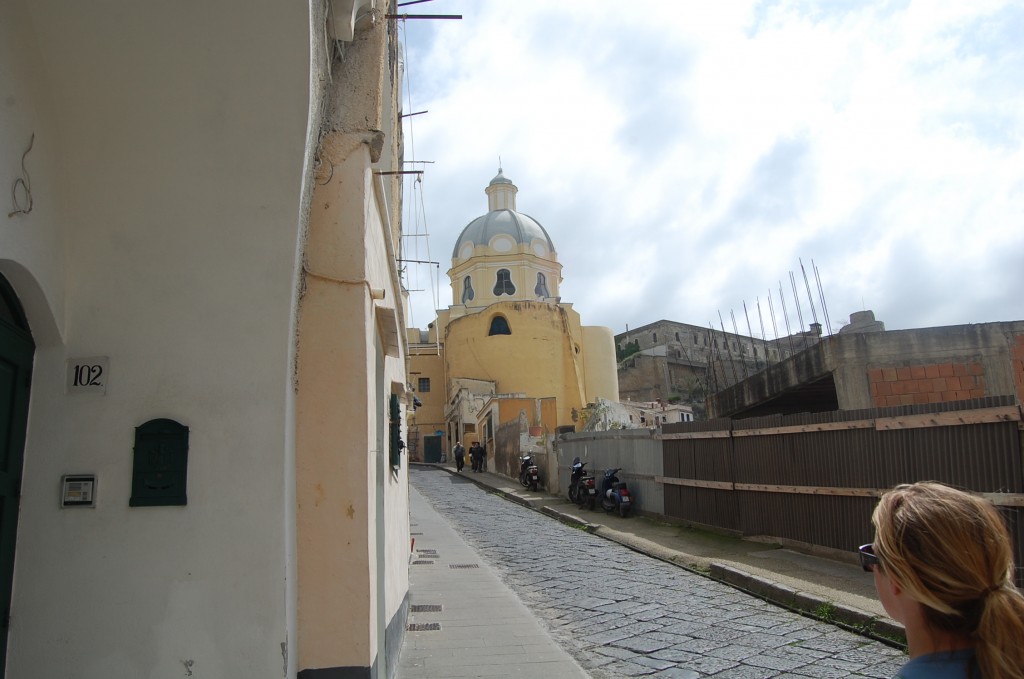 The streets are narrow and winding. Sidewalks can be hard to come by but that’s fine because life on the island is pretty slow.  Rather than getting mowed down by scooters as you would in Naples or Rome, you’re likely to see friends cruising side-by-side to have a chat. 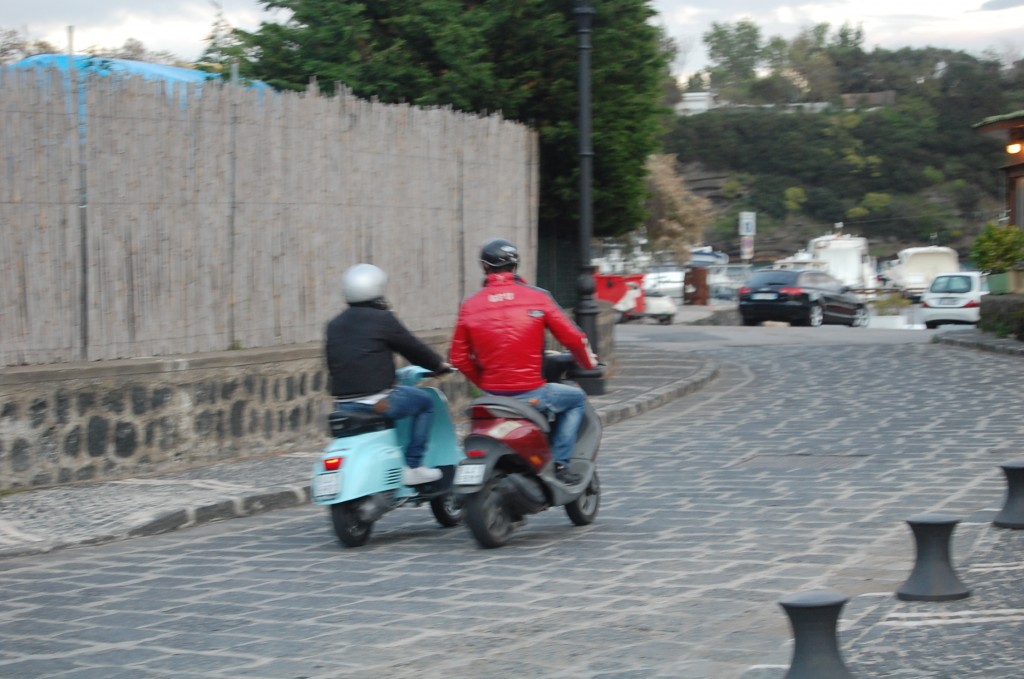 You don’t need a car to get around here.  You can walk around the entire perimeter of the island in less than 4 hours.  When I spotted this part of the island from a beach on the other side, it was only a 20-minute walk to get there. 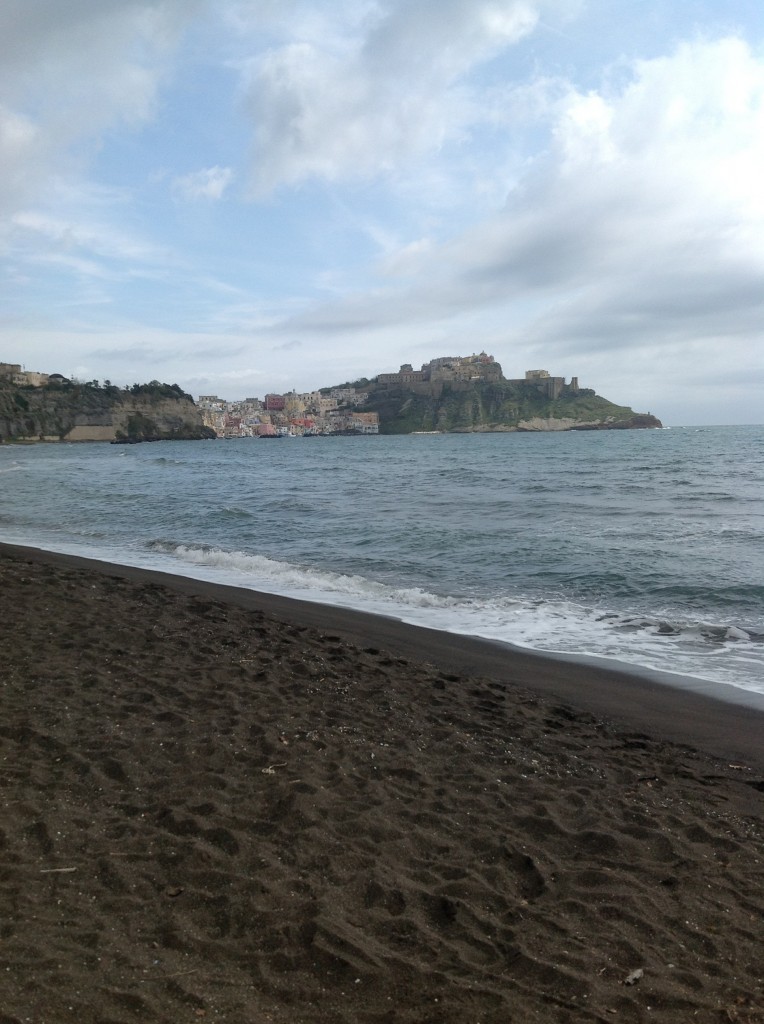 Procida can’t be done in a day from Rome.  It’s too much to get to Naples and then get the ferry.  Besides, it’s worth some more of your time.  We did it in a weekend, leaving Rome at a godforsaken hour (5:45 am Saturday) and returning by 10 pm on Sunday. 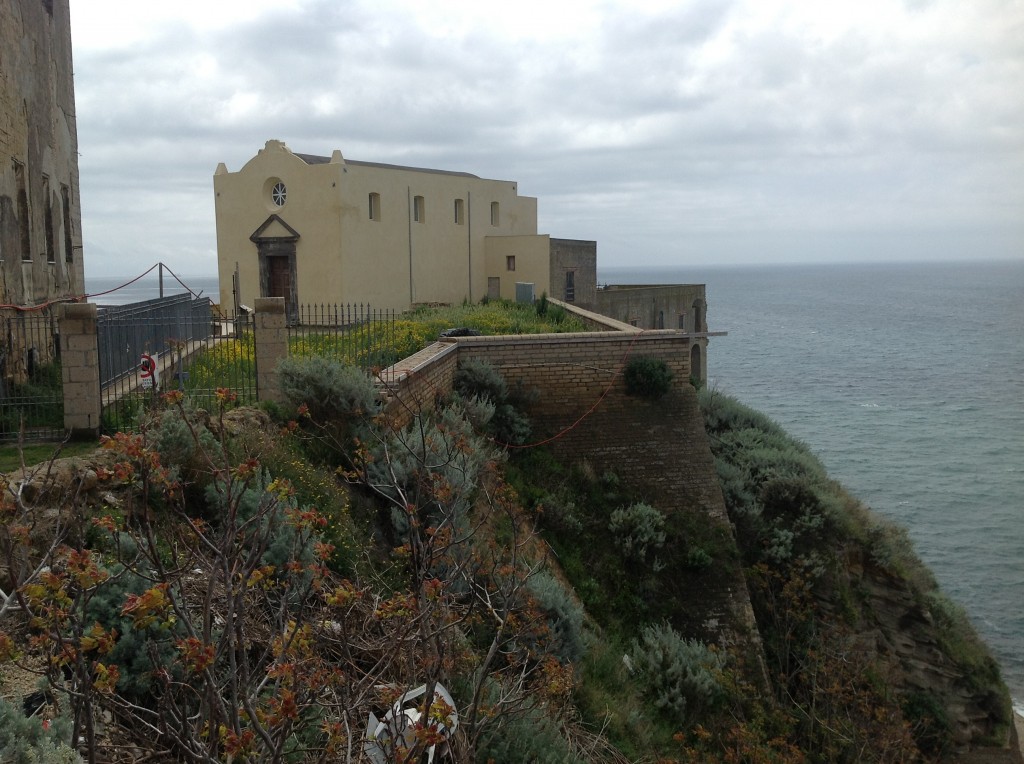 Where to Stay on Procida

With the exception of a few hotels, mainly near the main port, most of the accommodation options on this small island are family-run B&Bs or seasonal apartment rentals. The true question about where to stay on Procida has more to do with if you want to stay in the picturesque Corricella or prefer to opt to stay near the main port (which will be your arrival and departure point on the island). 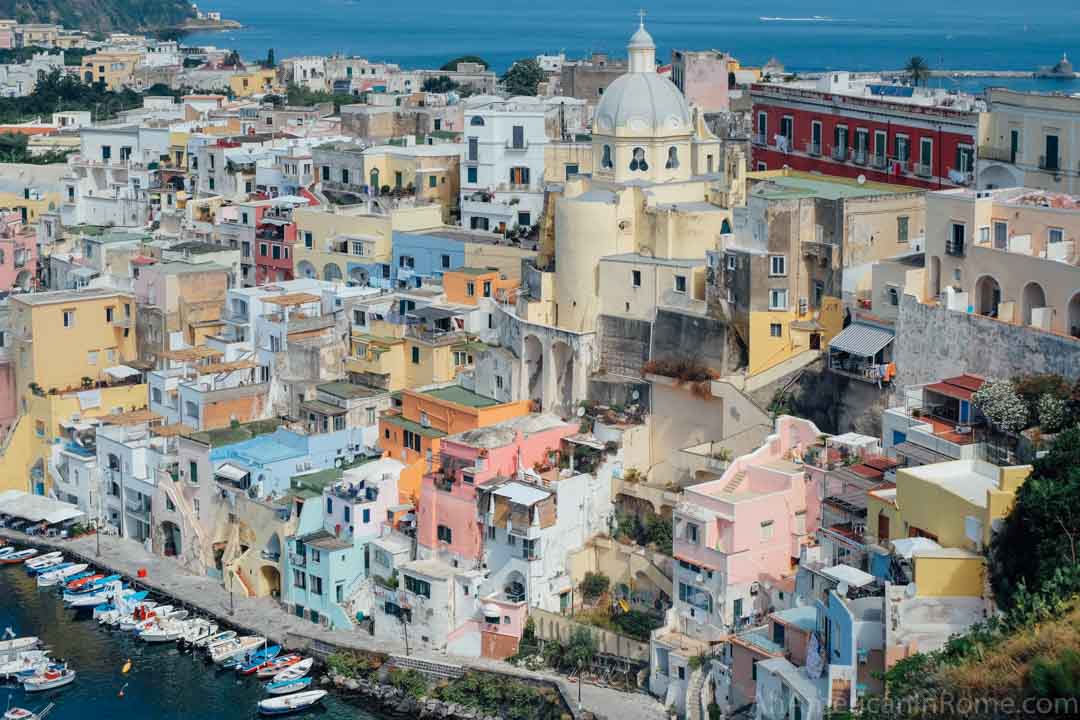 What to Do Nearby

Procida is an island so it is fairly self-contained. However, if you have a boat or are willing to hire one, then there are lots of things that you can do in the area.

Vivara is a tiny islet alongside Procida which has been protected and turned into a nature reserve. It is connected to the main island by a permanent bridge.

You can also catch the ferry or hire a private charter to visit neighboring Ischia. The nearby island is known for its thermal hot springs, a lasting sign of the volcanic activity that created all of the islands in the Bay of Naples.

If you are tired of beach views and lounging, you can indulge in history at the sunken ancient Roman ruins of nearby Baia.

9 thoughts on “A Weekend Retreat to Procida”