In the heart of Rome’s Vittoria district, which lies just beyond Prati, there is a small restaurant tucked in the alleyway. Outside its glass doors are two blackboards with menu items that are hard to find anywhere else in the Eternal City: Taiwanese potstickers, grilled pork buns, guabao (pork belly burgers). 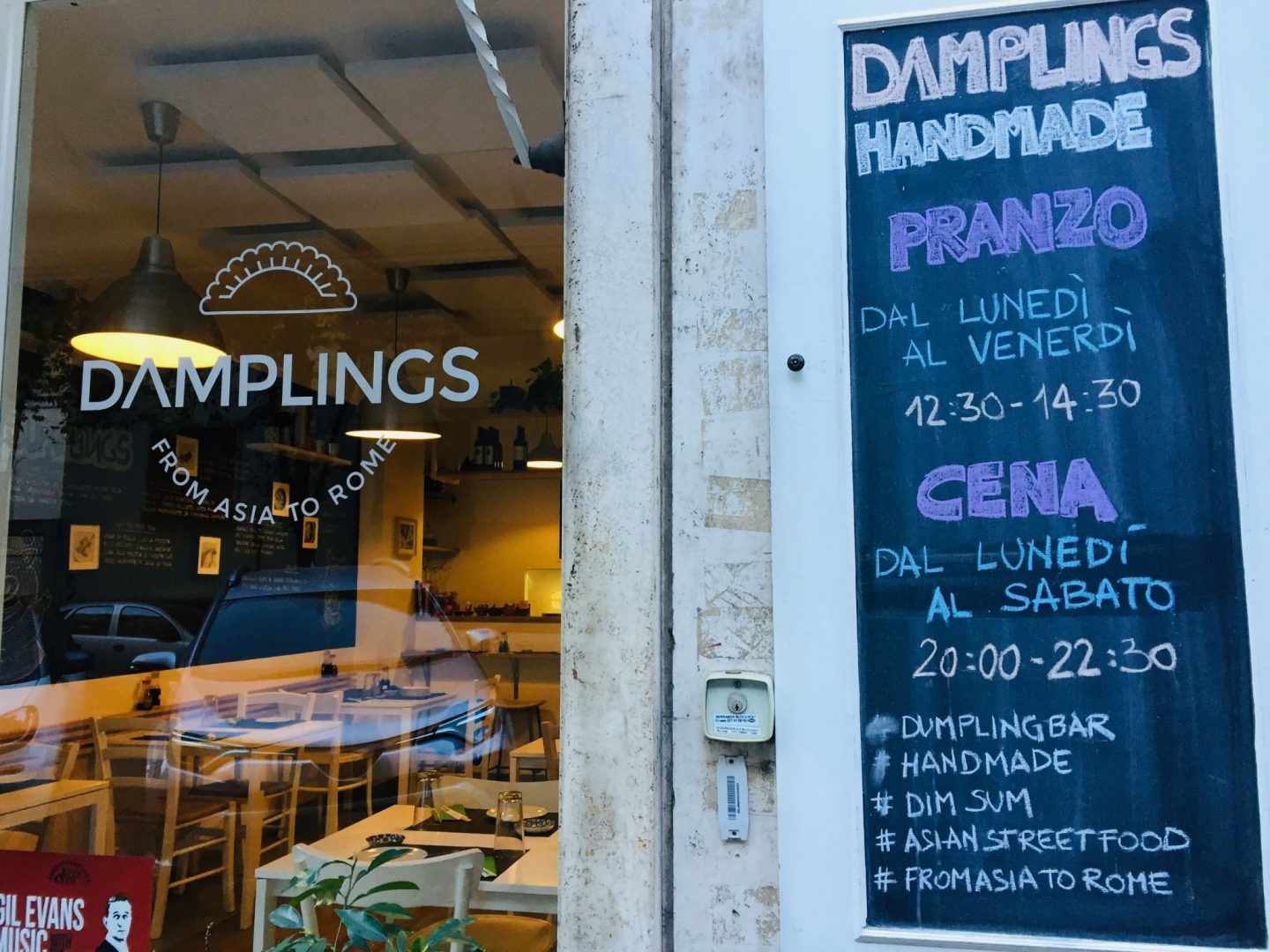 I found Damplings online, during one of my desperate Googling sessions to find good Taiwanese food in this foreign city. I’d only been studying abroad in Rome for three weeks, but was already tired of the ubiquitous pastas and pizzas, not to mention the extraordinary racism. I’ve had people yell “Cinese!” at me as I walk down the sidewalk, and seen one waiter tell my friend, “You’re terrible, you’re Japanese.”  Though these encounters so far have not been physically dangerous, it’s surprising how they can occur in the most mundane environments.

Seeking non-Italian flavors and an affirmation of my Taiwanese, I planned my trip to Damplings eagerly, transferred two busses from my student apartment, and an hour later found myself staring at Dampling’s short menu. When my server brought me potstickers and I saw that they were open-ended like the kind I would find at street stalls Taiwan, I could have cried tears of joy. 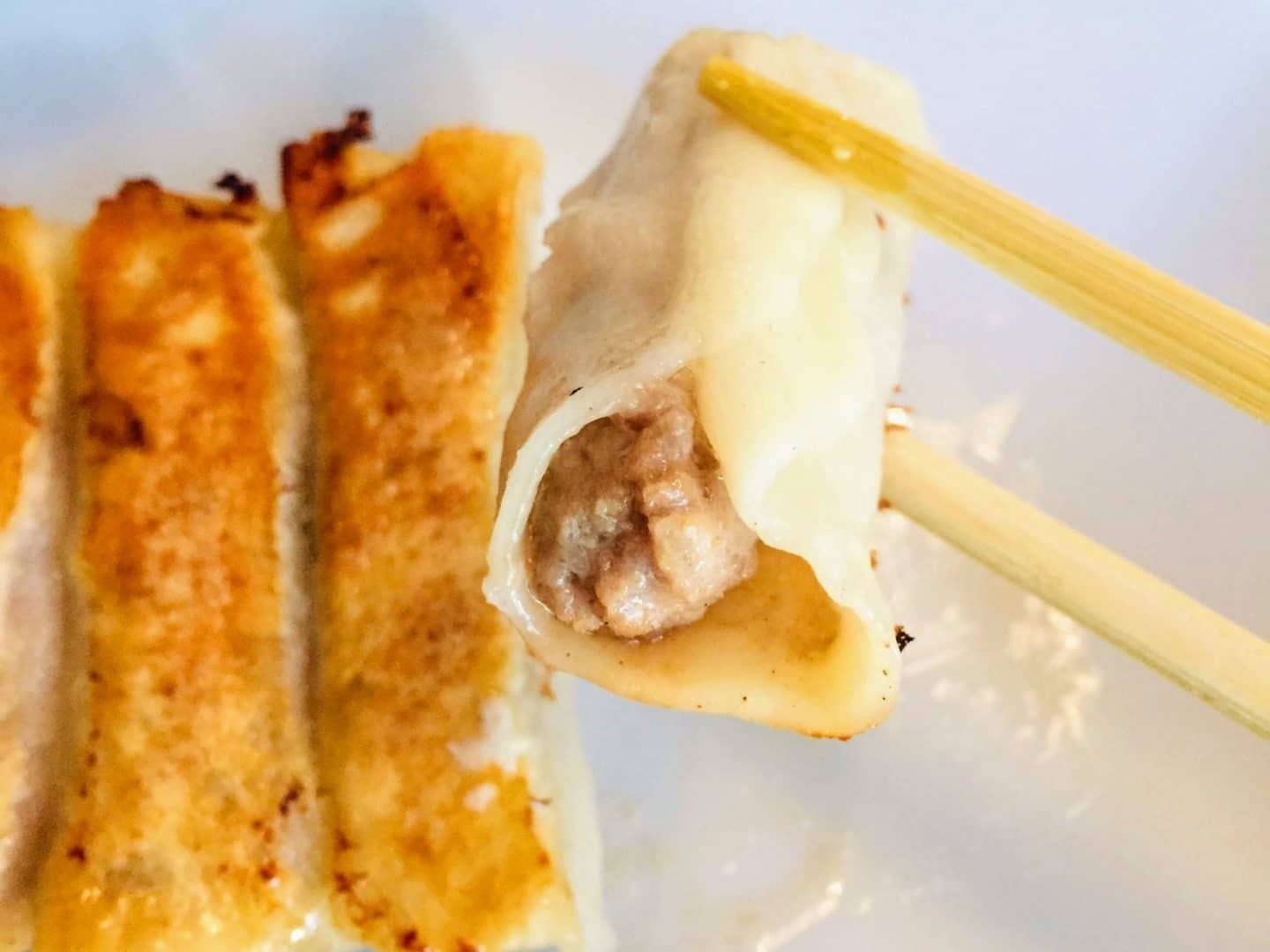 To understand how difficult it is to introduce non-traditional foods in Italy, consider this: dried pasta was introduced to Sicily first by the Arabs around 9th century AD. Yet when the Normans took over around 1090 AD, the public turned against Muslims, destroyed mosques, and attempted to erase Arabian influence on the local cuisine. The enduring myth today is that Marco Polo was the one who brought spaghetti to Italy from China. Almost 1000 years later, this fake origin story, crediting a native Venetian, is still more accepted.

In modern Rome, with the exception of the multiethnic Esquilino neighborhood, most restaurants still serve standard dishes from around Italy. I was curious about how Damplings manages to thrive in a culture that’s famously closed off to foreigners, so I reached out to the team to learn more.

On a Friday afternoon, a couple hours before dinner service, I returned to Damplings and sat down with founding partner Leonardo Teng and his girlfriend, Tanya Kholod, to learn more about Dampling’s story. He offers me water, then asked, “Like Taiwan, room temp? Not from the fridge?” Laughing, I say yes.

Damplings opened in late 2017, but Leo had the idea for it years before. He was born in Rome, to Taiwanese parents who worked in the classical music industry. As a result, he accompanied his parents quite often on trips between Italy and Taiwan, bringing Italian and European artists to Taipei for concerts. Trips to Taiwan should rightly involve street food, and Leo keenly observed which dishes were more acceptable for Italian palates. Soon, he began to dream of bringing these flavors to Rome.

The timing was just right. Rome opened to ethnic foods very late compared to other European metropolises (both London and Berlin have had thriving Chinatowns for years); only 30 years ago did a handful of Chinese restaurants spring up around the city. But like early stages of Chinese cuisine in America, these places were perceived as cheap, low-quality fare for takeout.

Near the end of 2015, there was an explosion of Japanese sushi restaurants in Rome. These restaurants usually have an all-you-can eat senza limiti option, letting Italians try a sample of foods from Asia in an upscale setting.

Seeing how Romans were becoming more adventurous epicureans, Leo saw a chance to create something new: an Asian restaurant serving high-quality street food, with a standard of service on par with European restaurants. He pitched the idea to Tommaso Vitali, who was a marketing director at a multinational telecom company. Tommaso agreed with Leo’s initial assessment, and believed that the Damplings concept was innovative, franchiseable, and marketable. Leo trusted Tommaso’s extensive business experience, and together they began to assemble the team. 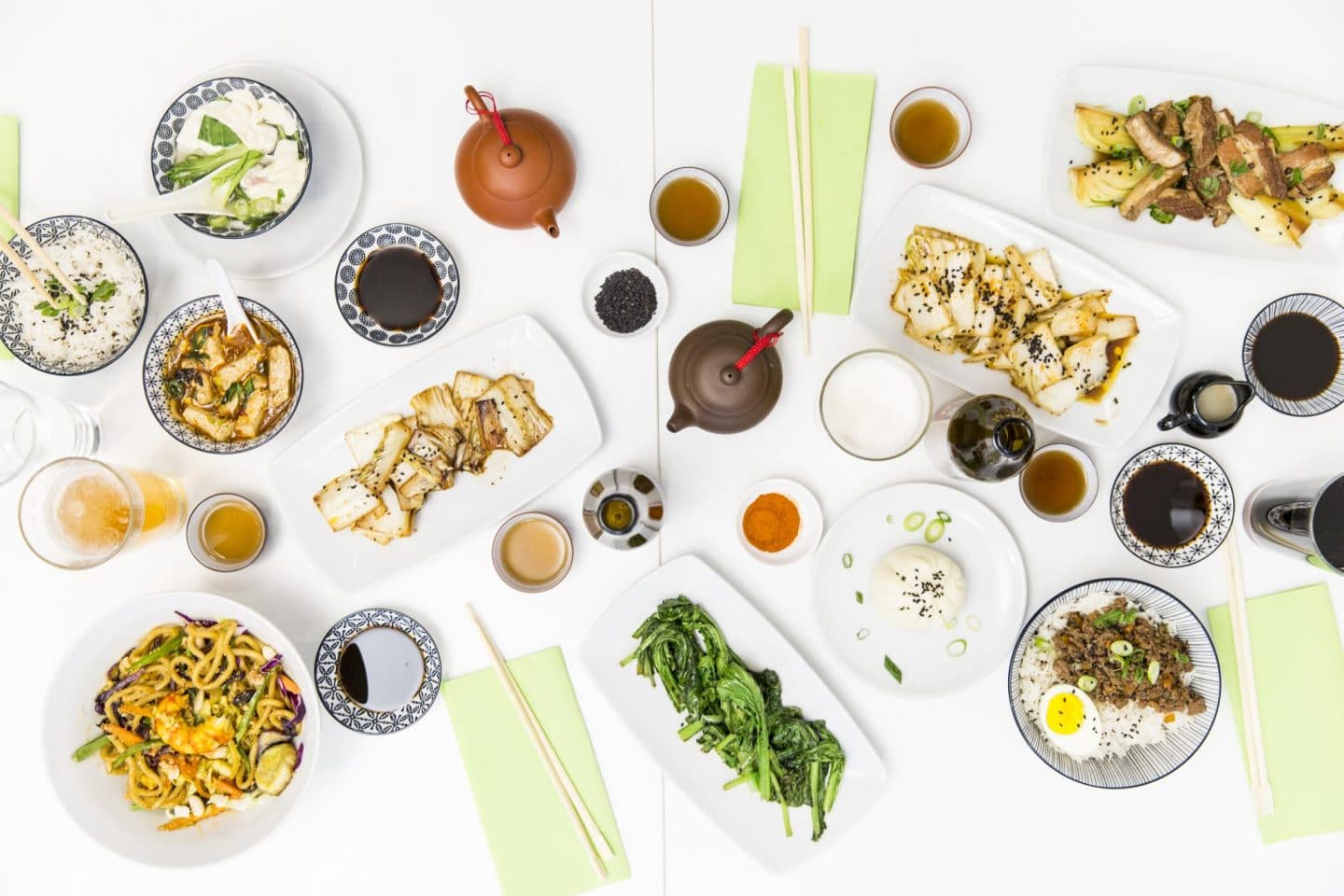 Fun aside: In Italian, Damplings is pronounced dumplings. Had it been spelled with a “u”, it would be doomplings. Also, the logo for Damplings has an upside down V, for the phonetic transcription of dumplings in dictionaries. 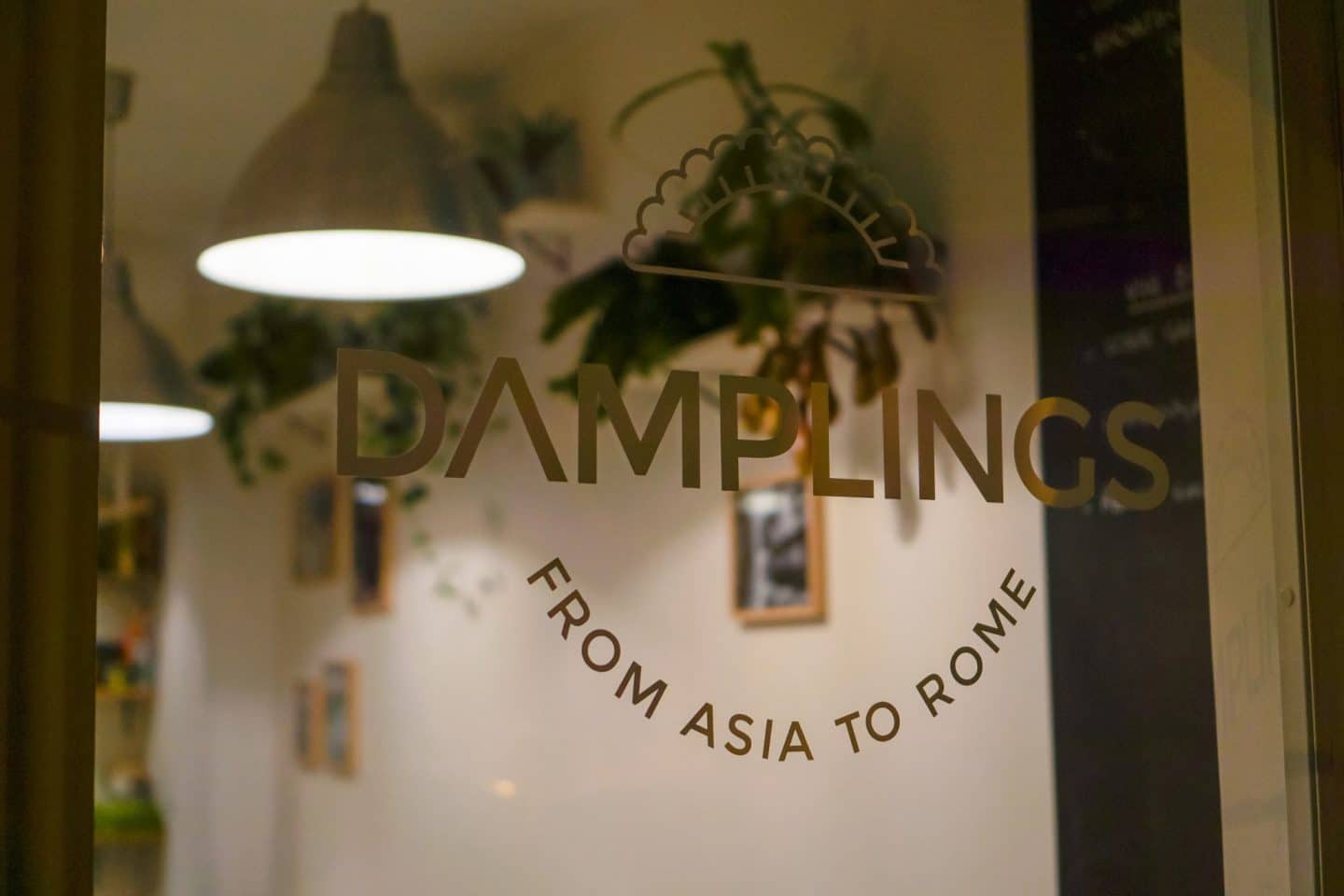 Damplings has 4 partners: Leo, Tommaso, Mauro Scali, and Davide de Giovanni. There’s also a chef, Alessandro Magrone, plus two sous chefs. As part of their training, Leo and the team learned from 3 different culinary schools in Taipei, picking up various tips from street food stands along the way. They found a mentor in Chef Chiung Hiung Sung, the former head chef at Grand Hyatt. Chef Sung stresses the importance of natural ingredients and doesn’t use MSGs, and Damplings adopted that philosophy as well.

When Tommaso suggested offering guabao (pork belly burger) in addition to guotie (potstickers) on the menu because guabao was becoming more trendy throughout Europe, Leo began to look for a recipe. After many tries, Leo tasted Chef Sung’s version and immediately “loved it.” Guabao made it onto the menu.

The extensive training in Asia allowed the Italian chefs to reproduce the recipes in Rome, even if the characteristics of flour and water are different. Humidity levels are different, too, but one bite of the delicate wrapper tells me that the chefs have learned how to apply their Taiwanese training to local ingredients.

I ask Leo if he identifies as Taiwanese-Italian, and he half-jokes that he’s “from the world.” Tanya agrees, describing him as a global citizen. Leo grew up in Rome, but has also lived in Taipei, Boston, Miami (where he was a day trader), London, and Milan. He’s attended American schools all his life. “My main culture is Roman, not Italian,” he says, acknowledging the misnomer that is Italian culture–regional differences run deep in this country.

Leo’s parents were involved with the Taiwanese embassy in Rome and also had a wide circle of Italian friends, so he was never isolated in one social sphere. “My parents were more tied to the small Taiwanese-Italian community because they moved here around 40 years ago, but sometimes I attend embassy events too. Somewhere on my phone I have a picture of me shaking hands with MaYingJiu [former president of Taiwan],” he says, gesturing. He doesn’t identify strongly as Taiwanese, but attributes his strong family values to his Taiwanese heritage.

I want to ask more, but stop when he remarks that we seem to be talking more about him than about Damplings.

I had been curious about about how opening a distinctly Asian restaurant has influenced his sense of self, because one of Dampling’s key to success is their savvy, tightly controlled branding. From the start, the team crafted social media posts to break Italian stereotypes about oily and cheap Chinese food. Their tagline, “From Asia to Rome” doesn’t name China explicitly, and the restaurant’s interior feels more Western than Eastern. The aesthetic decor, including a beautiful wood bar that I love, was personally built by Leo and Davide. There’s one Chinese calligraphy scroll, but it hangs in the back, next to the bathroom. Physically and aesthetically, Damplings is a far cry from the typical Chinese restaurants found in the south of Rome.

It’s surprising, then, that their menu is so–for lack of a better word–Asian. Here is the first place in Rome where I saw potstickers listed as guotie, rather than Ravioli cinese. The menu is full of phonetic spellings of Chinese street food: guotie and guabao (pork belly burger) from Taiwan, shenjianbao (grilled dumplings) from Shanghai, shui jiao (boiled dumplings) from Beijing. After each title, there are Italian and English descriptions. 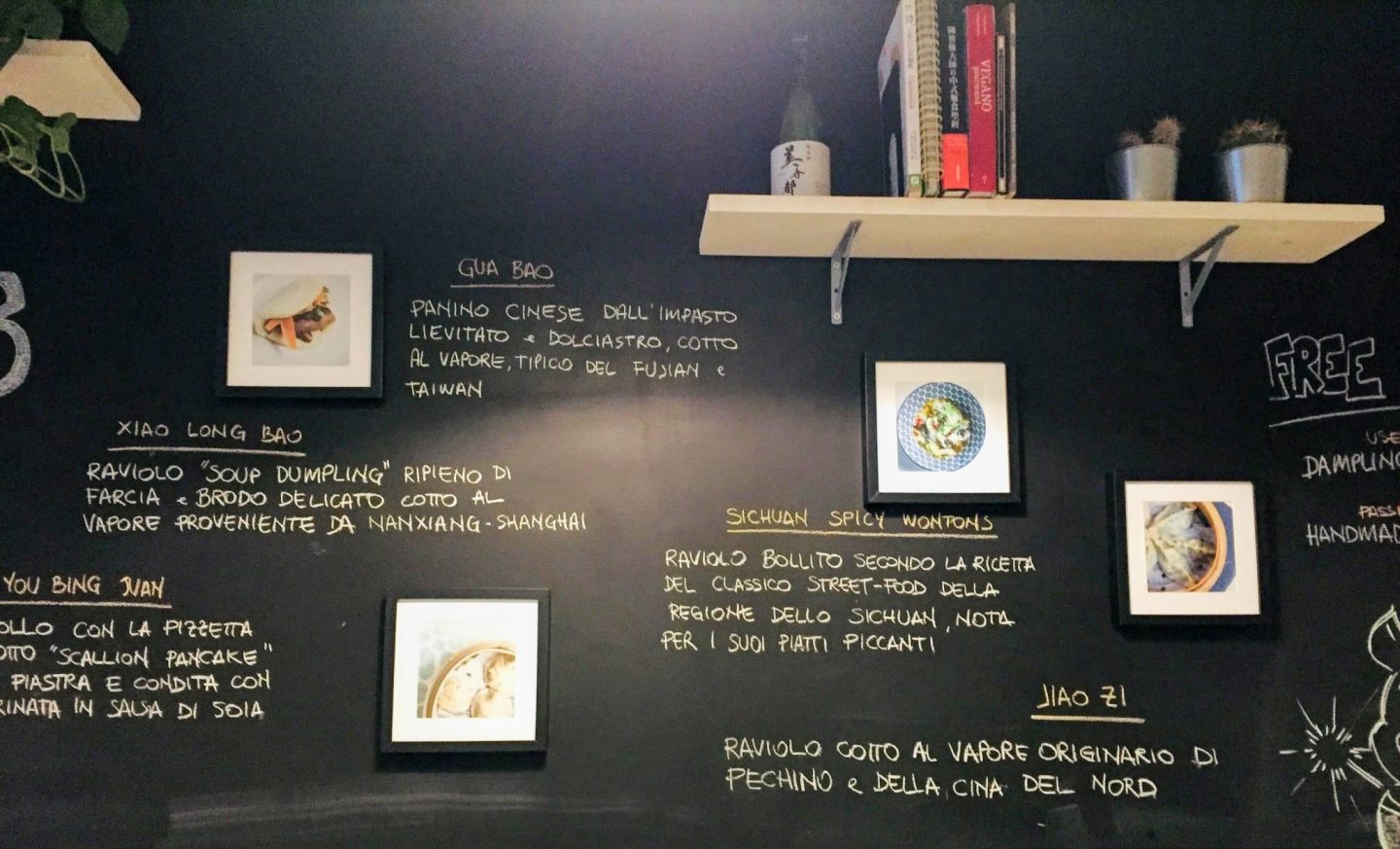 When I first ordered the guotie, I noticed two things that marked them as distinctly Taiwanese: 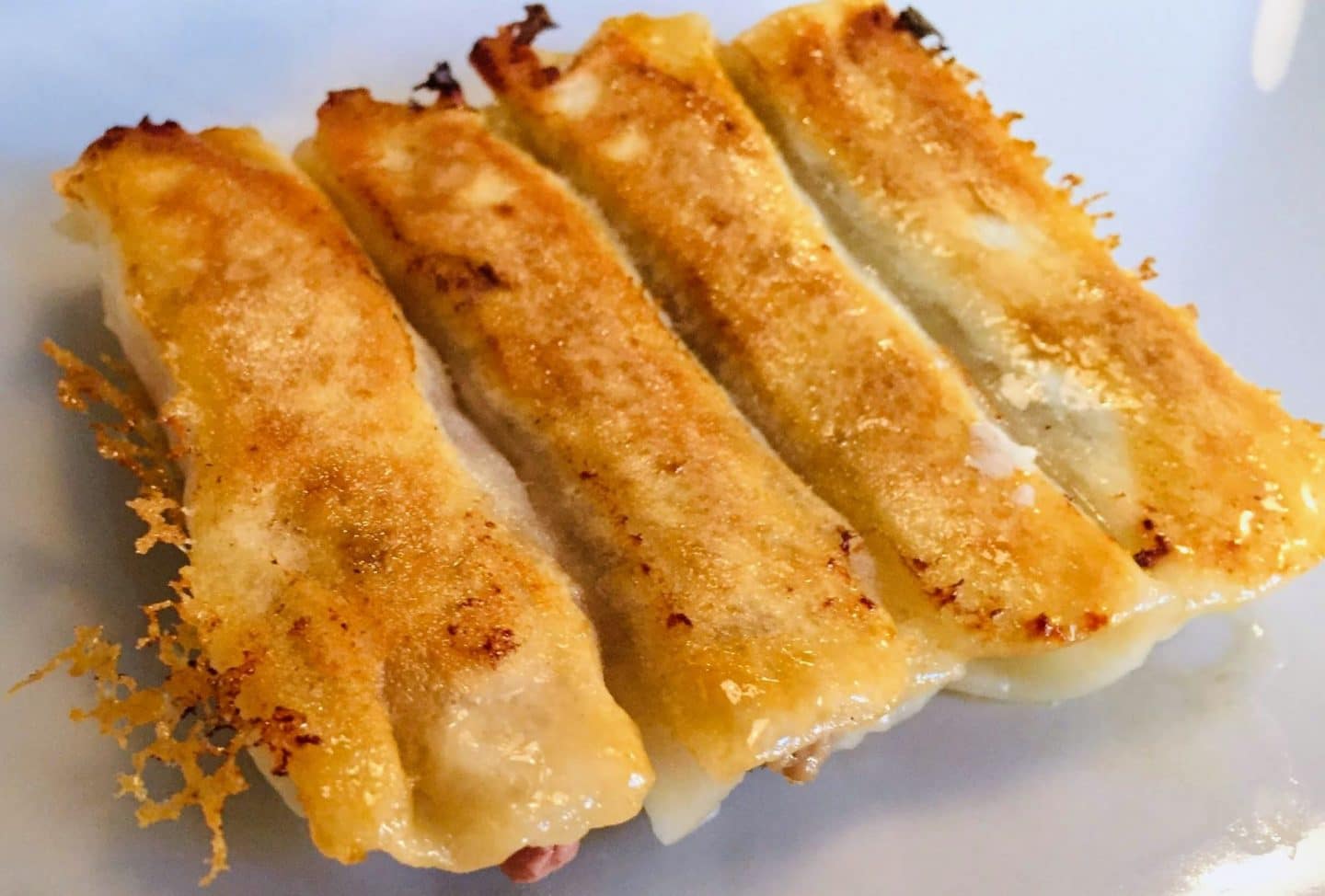 These are bold moves, since Italians are used to potstickers being grilled dumplings served with watery soy sauce instead of the thick soy paste. I mention this to Leo, and he nods. “I insisted on the soy paste. And here’s another thing we do that other stores don’t: we have vinegar.”

The attention to small details is the foundation of Dampling’s culinary creations. It’s present in their traditional shengjianbao sprinkled with black sesame seeds, and their fusion dishes, like guotie with chicory and feta. Their ingredients are sourced from Italian markets, and they even make the fluffy wrappers for guabao in-house. Through endless recipe testing and high standards, Damplings has managed the rare feat of perfecting both traditional flavors and innovative twists.

For dessert, Leo remembers that Asian desserts weren’t popular amongst the Italian musicians, so Dampling’s sweets are Western classics with an Asian twist. There’s matchamisu:  tiramisu dusted with fragrant matcha powder, and the cream is made with lactose-free mascarpone cheese for a lighter flavor. Or you could try ginger brownies, or panna cotta made with Maokong tea from Taiwan.

Damplings opened in late 2017 without much advertising, because the partners wanted to give the team enough time to ramp up. Nonetheless, word of mouth spread quickly; glowing online reviews praised the “quality of Italian ingredients” and the interesting new cuisine. Leo and Tanya are particularly proud that younger diners have started bringing their parents in too, because it reflects a more accepting palate across generations.

I ask if they’ve experienced any racism related to Damplings, and Leo pauses. “Obviously. Where isn’t there racism? Even in Taiwan, they’re racist toward foreigners.”

Sadly, I know what he means. With terms like laowai (foreigner) and an almost instinctive labeling of any southeast Asian woman as wailao (foreign labor), Taiwanese society has its share of racial discrimination. Damplings didn’t start with the goal of combating racism, but both Leo and Tanya know that in a city which stubbornly sticks to its culinary roots, Damplings success is hard-earned.

“When we see Italians come in and understand what we’re doing here, it’s very satisfying. We’re a little step towards bringing something more international and different here.”

Reservations possible, but not necessary.

Note: Some pictures for this post were reused with permission from Damplings, because the ambient lighting (especially during dinnertime) made it hard to take photos.