What comes to your mind when someone says ‘Italy’? Handsome animated plumbers? Rolling hills and white wine? Maybe a bright red Vespa? For many amused American travelers, the answer often comes down to the humble bidet一 the butt of many a joke.

Bidets, a French invention, are essentially large sinks that users can squat over. Water from the tap is used to clean up after going to the toilet, taking the pressure off toilet paper to do all the hard work. They can also be used to clean your feet after a long day, or in my case, as a cat watering hole (Kaali is a spoiled brat who refuses to drink from a bowl, preferring the luxury of running water). 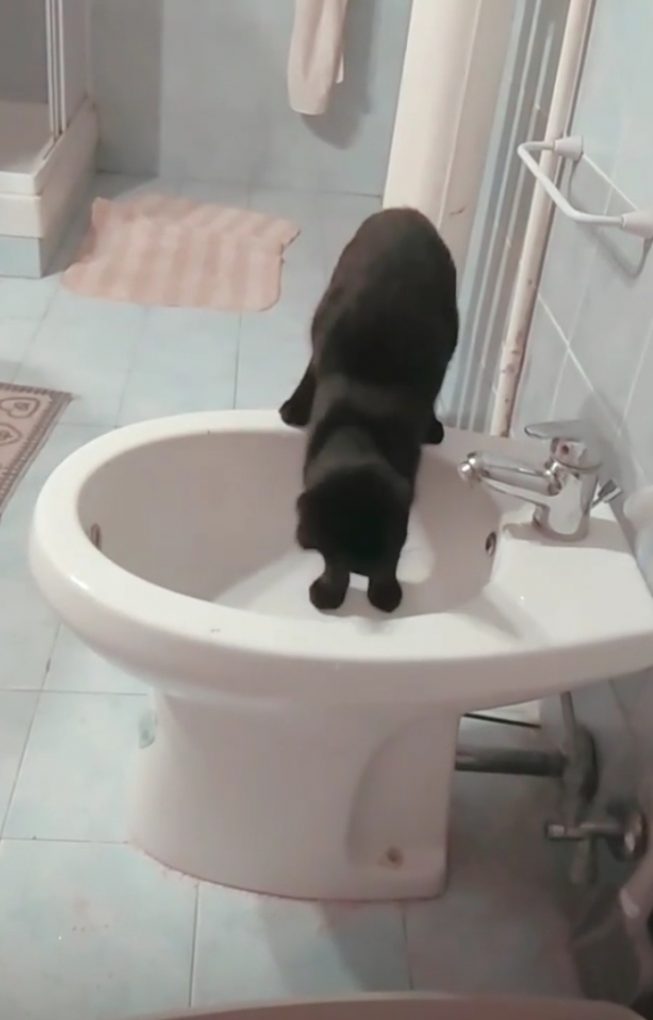 Bidets are found in pretty much every Italian home and hotel but are seen as a little too fancy for public restrooms. (Though even that is not unheard of). They are almost always standalone bidets, which are located next to or close to the toilet. It is rare to find a toilet seat bidet, where the water stream is integrated into the toilet.

Most people will place a bottle of ‘detergente intimo’ next to the bidet tap, which is a pH balanced soap that is supposedly better for ‘downstairs’ usage than regular soap. We once had an Italian couple house sit for us for a couple of weeks, and when we got back, sure as day, there was a small plastic bottle of the stuff perched on the bidet. However, I can’t help but feel that most of these soaps, and they can be disruptive to your natural biotic system down there so I stay far away. Your call.

How to Use a Bidet in Italy

Essentially, you need to get the water to the temperature you prefer, and then drop your trousers. The best way to use a bidet is to straddle it, so you may even want to take at least one leg out of your pants so you don’t get stuck in a very awkward balancing act. If it is your personal bidet, there may be specific washcloths you keep on hand. Otherwise: use your hands to splash strategically. You can face towards the spout, or away from it. However, facing towards it (e.g. the opposite from the way you would sit on a toilet) lets you control things a bit easier.

Once you are finished, run the water of the bidet a bit more to ensure the basin stays clean.

My experience with bidets

In India, where I’m from, it’s more than common to use water to clean up instead of toilet paper. In fact, whenever I went on holiday abroad it usually took me a week or so to get used to just toilet paper, but it always left me feeling a little dirty and I would shower multiple times a day to compensate.

So when I moved to Rome two years ago, the ever-present bidet was a pleasant surprise. The idea was the same, even if the execution was different (in India, we don’t have a whole separate fixture, just a “hose” placed near the toilet). Bidets were a small but significant piece of comfort in a foreign land.

Laugh if you like, but to anyone who uses toilet paper regularly, try going without for a week. The discomfort is real.

Still Grossed Out? It May Not Be Your Fault:

Despite my allegiances to water-based cleaning, it is understandable to me that many North Americans find bidets strange. There is actually a historical explanation for it.

During the 18th century in the U.S., amid the War of Independence, bidets were associated with British aristocracy (borrowed from the French). As part of the new world, Americans rejected anything their fuddy-duddy English counterparts saw as fashionable, right down to personal hygiene methods.

More recently, American soldiers during World War II were exposed to bidets in the brothels they frequented, and so the bidet became a symbol of prostitution in their eyes.

So if you feel unreasonably turned off by the idea of using a bidet, it might just not be your fault.

That being said, if you’re in Italy, don’t be afraid of taking it for a spin. In Italy, it would be considered totally gross NOT to have a bidet in your home. And if you still don’t like it, maybe your cat will.

Want to learn more about bathrooms in Italy? Who wouldn’t! Here’s a look at why the public toilets in Rome tend to be… gross.

Lea is an Art History major from Pune, India. She has been living and studying in Rome for two years now, using her love for home-cooked food to navigate the culture shock.

3 thoughts on “Bidets in Italy”